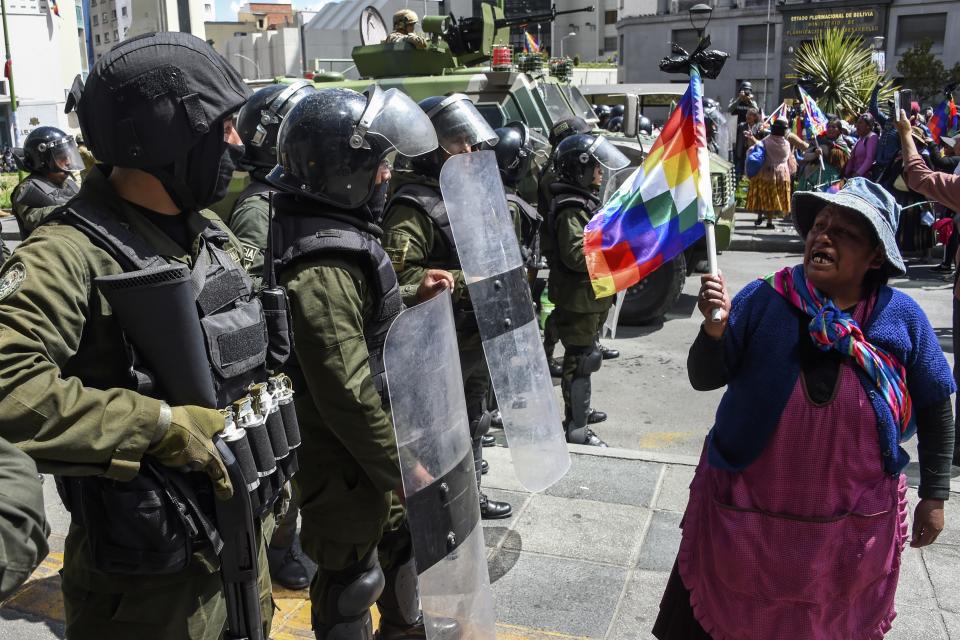 I have a colleague who had to leave Bolivia. She and her companion are being persecuted and, she was told, they are looking for him to “liquidate” him. Before Evo Morales was forced to resign, a list of names began to circulate. It was Arturo Murillo, minister of the de facto government, who was in charge of putting it in black and white: he spoke of “hunting” three leaders, after persecuting parliamentarians accused of “sedition” and “subversion. Communication Minister Roxana Lizárraga singled out “journalists and pseudo-journalists,” and on Thursday the Telesur channel was removed from Bolivian television sets.

The strategy of decapitation and persecution is part of the architecture of the coup d’état that proceeds according to a series of planned steps. The first was to force the resignation of Evo and Álvaro García Linera. The second was to build a de facto government, based on the self-proclamation of Jeanine Añez. The third, begun earlier and deepened in these days, is the persecution of leaders, along with the commencement of militarized repression. The latter was announced with the decree to exempt the Armed Forces from criminal responsibility and a supplementary appropriation of an additional $4.8 million.

The fourth step is the one that is being developed but has not yet materialized, the call for general elections, for which new authorities of the Supreme Electoral Tribunal and the Departmental Electoral Courts must be appointed. This is the most complex point for those who are at the forefront of the coup d’état. The appointment of TSE authorities must pass through the legislature, where the Movement Towards Socialism (MAS) has a two-thirds majority. The de facto government seeks to force an agreement with the MAS to accept the electoral call according to its conditions. That means getting MAS to recognize Añez as president, impose the electoral authorities, and simultaneously proscribe Evo. The latter has already begun with the initiation of the “investigation process” announced by Attorney General Juan Lanchipa.

The fifth and final step will be the election as such. There is still no agreement within the coup bloc about the date. Fernando Camacho affirmed that the deadline for the contest is January 19 – the 20th would culminate Evo’s mandate – while other voices have already stated that there are no conditions to have elections in January. This point is central to the structure of the coup d’état that from the beginning was presented as democratic and supported by President Donald Trump and his administration, the Secretary of the Organization of American States Luis Almagro and the European Union.

But the democratic fiction that conceals the coup requires the convocation of elections. Añez presented herself from the outset as interim president and the OAS itself, which denies that there has been an “institutional breakdown” – as Uruguay asked be incorporated in the last resolution – urges the de facto government and the political actors to achieve this call. What the coup plotters are debating, without internal agreement, is the timing and conditions for those elections. They are seeking to guarantee the proscription of Evo Morales, and some argue that they will do the same with the MAS, and, in turn, have the TSE under their control.

While that happens, the persecution deepens, the police and military repressions have killed more than thirty people, and the pain and anger grow. In the face of this, there is resistance in the streets and in the legislative power that is advancing as a whole, although not necessarily in a coordinated manner. The MAS, as it has already announced, is working to achieve an electoral solution in the most unfavourable conditions. Will it succeed? Several parliamentarians are under threat in a context of absolute coup impunity that has come, as was seen, to self-proclaim without quorum and persecute even the dead.