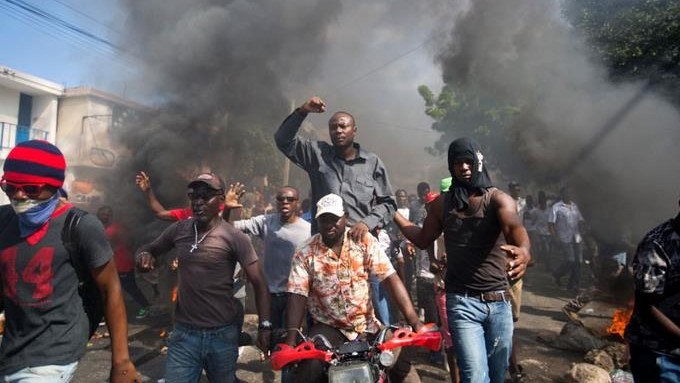 Thousands of demonstrators across Haiti mobilized on a new anniversary of the Battle of Vertières on November 18.

Both the high-class metropolitan, commercial and residential areas as well as the marginalized neighborhoods of the capital Port-au-Prince, were shaken in the early hours of November 19 by the sound of several gunshots from unknown origin that haven’t apparently killed or injured anyone. According to the denunciations of social movements, these were new attempts to terrorize and disband the population. The threatening overhead flight of drones of the latest technology was also denounced.

These attempts sought to prevent the majority of the population from taking control of the streets, after a few days of a partial truce that allowed operation of some commercial and civil activities in the capital, without however enabling the reopening of educational activities or the usual transportation flows. Despite this, small demonstrations and roadblocks in many departments of the country did not stop, and the situation of crisis that began in early September continues.

The ongoing infiltration of paramilitary groups from the United States must also be mentioned when analyzing the situation of crisis in the country. This fact was already confirmed in the massive protests of February this year, when seven men, mostly from the US, were arrested carrying a war arsenal and advanced telecommunications equipment. After their arrest, they were quickly extradited with virtually no investigation. An identical incident repeated last week, when a US citizen of Haitian origin, Jacques Yves Sébastien Duroseau, a former member of the armed forces, was arrested at Toussaint L’Ouverture International Airport with a shipment of arms and ammunition, in his possession.

Different sectors of the opposition denounced that the arrival of firearms in the country is part of an express demand by President Jovenel Mose, to control and suppress the demonstrations using irregular groups and perpetrating massacres such as the ones in La Saline and Carrefour-Feuilles. Or to perpetrate selective assassinations like that of journalist Néhémy Joseph.

So far, neither US officials nor their embassy staff in Port-au-Prince have commented on this, despite the visible responsibility of their airport authorities in the arrival of these mercenaries in the country.

On 13 November, the short stay of the USNS Comfort hospital ship, the largest of its kind in the US navy, ended in the country. According to the US ambassador to Port-au-Prince, Michele Sison, it had come to offer “free medical services on land and sea, family medicine and surgical interventions.” Its deployment, along with that of Navy helicopters, raised numerous suspicions after the dissemination of images showing foreign servicemen landing in the capital port, reviving the worst memories of the American occupation of 1915-1934. This is the same vessel that Vice President Mike Pence and Southern Command Admiral Craig Faller set out to deal with the alleged Venezuelan refugee crisis in Latin America, as part of their strategy to install the notion of exceptionality allowing a “humanitarian occupation” in the Bolivarian Republic of Venezuela.

Despite an Amnesty International report that verified the disproportionate use of force by the National Police while repressing social protests, and the UN Human Rights Office that recognized 42 deaths in early November, the repressive situation has got worse. On November 19, as part of the relaunch of anti-government protests, four people were wounded in Delmas 95 by armed civilians who could not be identified. The incident left two fatal victims, a journalist and a policeman.
National police officials fired tear gas against protesters demanding President Jovenel Moïse’s resignation.

Thousands of demonstrators across Haiti mobilized on a new anniversary of the Battle of Vertières, the one that gave victory in 1803 to Jean-Jacques Dessalines’s “Indigenous Navy” against Napoleonic forces, giving way to the triumph of the Revolution Haitian of 1804.

President Jovenel Mose neglected the traditional visit to the historic site, located 240 km north of the capital, and fulfilled his duty merely by bringing a floral arrangement at the National Pantheon Museum, located a few meters from the government palace. He did so surrounded by a strong police operation, in an almost clandestine memorial that prevented the public from accessing the compound.

The organizers of Tuesday’s mobilization were different opposition coalitions that have just come to an agreement that, in a possible political transition, the presidency would be occupied by a judge of the Court of Cassation, and the vice-presidency by a member of the opposition party. The opposition includes: the Consensual Alternative, commanded by the Democratic and Popular Sector of lawyer André Michel, part of the parliamentary opposition of the traditional political class and representative of some of the most important factors of power; the Pasarela, an initiative that aims to officiate a bridge between the various opposition sectors, led by Bernard Craand, a technocrat who served as a coordinator of the Economic Forum until September of this year; ‘Mache Kontre’ formed by socio-democratic parties such as the Struggling People’s Organization, Fusion of Haitian Social Democrats, and other small parties; the new Democratic Bloc of former Minister of Labour and Social Affairs, Victor Benoit, a dissident of the social democratic coalition and a faithful exponent of a small conservative bourgeoisie; and finally the Patriotic Forum, a coalition of more than 60 urban and rural social movements, trade unions and left-wing political parties, a space that mostly represents those who take part in street mobilizations despite its persistent spontaneity. Each of these groups, together with the civil society sector, will appoint two representatives to elect the new authorities to complete the expected resignation of Jovenel Moïse, demanded virtually by all sectors of the nation.

However, even today, the government continues to receive support from the last and decisive power factor in the country. It is the United States, which has so far guaranteed the continuity in power of the ultra-neoliberal Haitian Tèt Kale Party (PHTK) party. In return, US geopolitics can count on Haiti’s action against Venezuela in regional spaces such as the Organization of American States (OAS) and the Caribbean Community; sustaining relations with Taiwan and with the consequent blockade of Chinese trade interests in the country; and also with broad privileges for U.S. and Canadian mining in the north of the island country.

*Lautaro Rivara is a sociologist and member of the ALBA Movements Dessalines Brigade in Solidarity with Haiti.