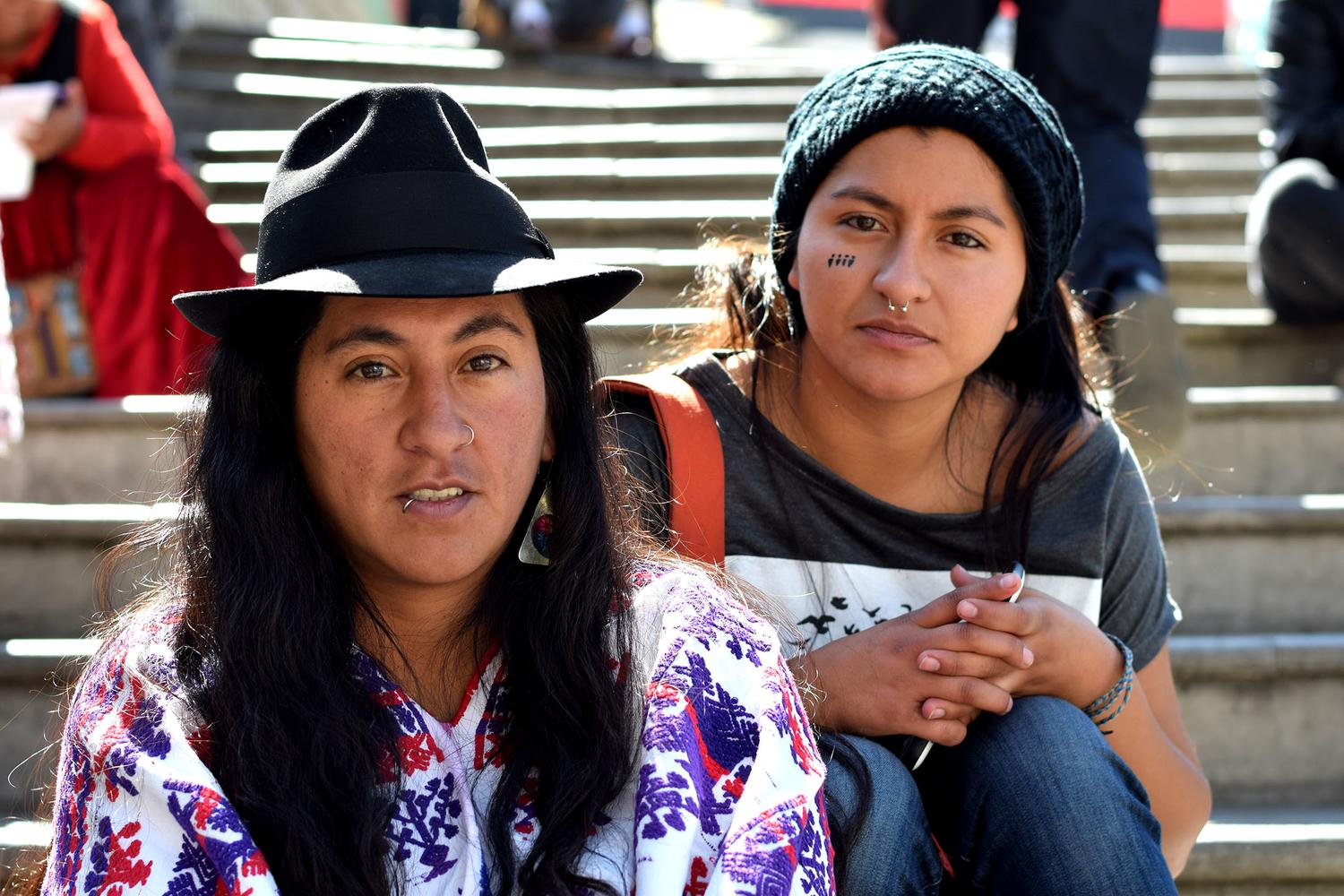 In the face of the terrible situation underway in Bolivia since the coup d’etat against President Evo Morales, Contexto interviewed Adriana Guzman, member of Bolivia’s Feminist Anti-patriarchal Movement.

Guzman analyzed the characteristics of the coup, explained which groups are really behind the self-proclaimed “president” Jeanine Añez, and she ensured us that the native people resistance “is not over with Evo, this struggle aims at defending our dignity amidst a racist and fascist coup d’état.”

How is Bolivia’s Feminist Anti-patriarchal Movement facing the resistance against the coup d’état?

As a feminist group, we are supporting and joining major confederations such as the Peasant Union and the Federation of Neighborhood Committees. We define our struggles from there and this is why we are in the streets. We do not understand a feminism movement that isolates itself away from organizations in struggle.

Plenty of repression has occurred since Jeanine Añez took office. We’ve learned that the times of fascism are fast. Political strategy is not enough there. Political calculation, such as the tact of getting along with everybody, is not enough in the face of fascism. Fascism comes to kill and it comes faster than we may be able to calculate.

Since Jeanine Añez took office on November 12, she ordered the Armed Forces to repress with more violence. The following day, she appointed an Armed Force Commander (trained under the military dictatorship) and a new Police commander. She restructured these two forces that had been supporting the coup but with disperse sectors because there was not a single position within the Armed Forces.

Today, we have soldiers and police officers brutally repressing the population. Over 20 people have been murdered due to repression so far. The de facto government and its national and international allies are trying to say there was not a coup d’état in Bolivia.

They can’t deny there is a fascist coup d’état in Bolivia. A coup d’état that is not only headed by the military sector but also by civilians, businesspeople, oligarchies, and landowners.

What is the strategy of the population to withstand the coup?

A basic strategy to put pressure has always been occupying cities and blocking roads. In this case, citizens are doing that in of La Paz, the seat of Government. This siege is already working; there is little food in the market; no meat, poultry, eggs, potatoes, etc. For instance, poultry is costing today three times more than it was 15 days ago. That strategy is working.

In this connection, the Interior Minister together with the Economy Minister decided to bring aircrafts with meat, poultry and eggs from the East, from their area, because the entire Cabinet is from the East and that Civic group responds to that. They are doing that trying to break the struggle strategy but the meat brought in aircrafts from the East is so expensive that it can be afforded only by wealthy people.

How have social organizations responded?

Organizations continue being active. We are part of the struggle strategy organized by the Confederation of Neighborhood Committees since last Saturday. This is about blockades and road blocks, demanding Jeanine Añez’s resignation; the military high command resignation; the police high command resignation; relinquishing the youth because  our young people who are conscripted enlisted for compulsory military service are obliged to go and open fire on the people. We do not want our children to be put in a position where they are ordered to open fire against us.

What is the current situation?

Two worlds were seen last Sunday: on the one hand, people mobilizing in downtown La Paz, which is militarized. More than fifty of our comrades were arrested, without rights, without lawyers, all their rights infringed, not even the right to use restrooms.  On the other hand, the Government is trying to pretend that nothing is going on here, trying to get  people to do their shopping in the market, telling “families go to the parks, as if everything was normal.”

Last Saturday, we heard the self-proclaimed president signed a decree enabling the Armed Forces to repress freely without the risk of being brought to justice.

Yes, last Saturday she signed that decree proposing to not try police officers and soldiers who open fire on protesters. De facto Interior Minister Arturo Murillo tried to justify this action and downplay it but the truth is that this is a blank check to kill with complete impunity.

Jeanine Añez is the visible face of the coup d’état, but who is behind her?

This coup d’état is headed by Fernando Camacho, chair of the Santa Cruz Civic Committee and representative of the group with political power in this country: businesspeople, landowners, soy producers, and investors in transnational companies. They have managed to leverage the fundamentalist power of the Church, evangelical groups, etc.

While no other coup launched during the last decades in the region, this one has a huge racist component. Why?

It is because of Bolivia’s composition; because 63 percent of the population is indigenous, and because we’ve had very important transformations during these 13 years. Not only due to public policies but because we have decided to stop bowing down, to stop looking at ourselves with shame, to stop calling ourselves “señoritas” and start naming ourselves Aymaras. This is what they want to reverse. This is the racist part because they want us to be exploited on their properties and as servants in their houses. Out of necessity this coup needs to be fundamentally racist. They have launched this coup d’état to recover their colonial power over our bodies. They want us to bow down again, to go and raise their children and be their maids.

The more their violence is strengthened, the more our anger and resistance grows. Different to what they thought would happen; plenty of organizations are arriving in La Paz now. This is not over with Evo. This struggle aims at defending our dignity amidst a racist and fascist coup d’état

What we need now is to continue breaking the media siege. De facto Communications Minister Roxana Lizarraga issued a resolution for journalists who condemn the coup d’état to be tried for sedition. Coup mongers have infused themselves into the media, they have destroyed community radio stations; instead of broadcasting about repression in the national TV channel, they are playing a special program about singer Camilo Sesto. We need to break that media siege so that the whole world can see the brutal repression of the racist and fascist coup d’état in Bolivia.