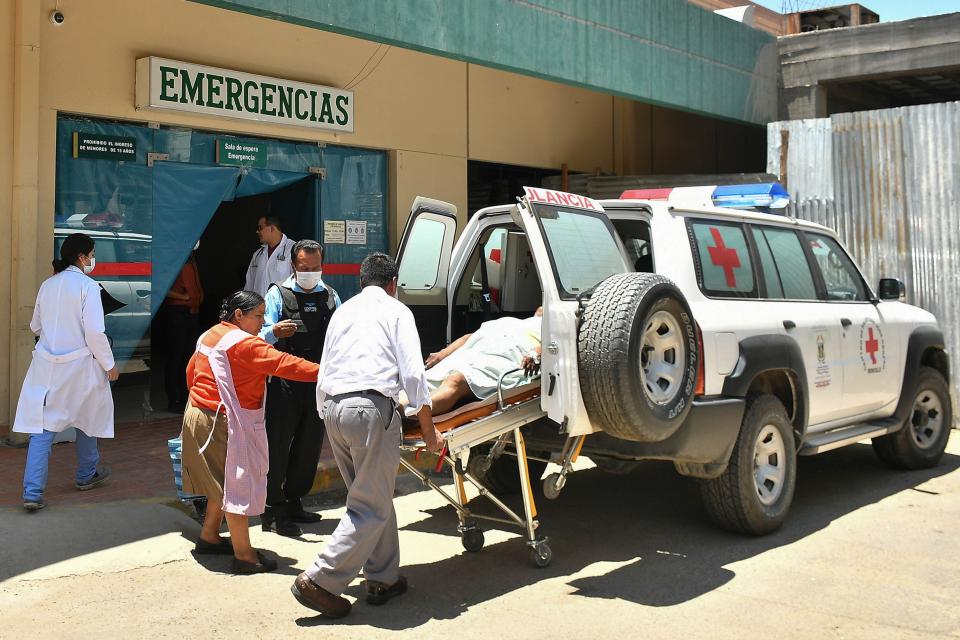 One of the coca growers injured in Cochabamba, a place of resistance to the coup. Image: EFE

Arturo Murillo, minister of the de facto government of Bolivia, is in charge of constructing one of the most dangerous narratives of the coup d’état: that of the internal enemy. His discourse has been part of a signalling process that has two central elements: to manufacture an imaginary and dangerous enemy, and to promote that the oppressors are the victims.

That construction stepped up a notch on Monday when Murillo pointed out that self-proclaimed President Jeanine Añez had been unable to travel to her home department, Beni, because of threats against her. “The president is a military target, our families are a military target,” he said.

The enemy that takes shape in the de facto government’s discourse would be made up of several elements: internal subversive groups, foreign armed groups, Bolivian and Mexican drug gangs and members of the Revolutionary Armed Forces of Colombia. They would use “large caliber weapons”.

The de facto government thus seeks to legitimize through victimization the repressive actions of both the Bolivian National Police and the Bolivian Armed Forces. The latter was deployed in three stages. In the first, it took to the streets to militarize cities and highways, then it was exempt from criminal responsibility in the operations, and finally this Monday it was granted an additional 4.800 million dollars.

The construction of the internal enemy pursues another objective: to deny responsibility for murders. Thus Murillo denied that there were 24 assassinated, although that number was provided by the Ombudsman’s Office, he said that there were only 9 dead, of which 2 had been killed with front shots with a non-conventional calibre not used by state security forces.

The de facto government was therefore the object of an armed attack to destabilize it that would have been intellectually authored by the forces of the Movement Toward Socialism (MAS), the process of change led by Evo Morales.

Morales, who is in asylum in Mexico, addressed the repressive situation in the country, and denounced that they are trying to “blame us for the 24 deaths caused by their self-appointed “president” over five days.

He also said, in an interview with the Al Jazeera network, that he intends to return to finish his term that ends on January 22, 2020: “All right, everything for life, for democracy, I withdraw my candidacy, but they should let me finish my term (…) I am looking for a legal way to return and be with the people who resist the dictatorship, the coup,” he said.

That resistance has continued its process of growth in places of visibility, such as La Paz, El Alto, Cochabamba, as well as in the country’s highways, intermediate cities and towns. It is an uprising led by different movements that ask Añez to renounce what never corresponded to him because of the Constitution.

The de facto government’s response, in addition to repression and assassinations, has been to disqualify the protests: “There are blockades in various parts of the country, but there are no demands, what are the demands, I don’t understand,” Murillo said.

Along with this scenario, one of the central questions remains on the table: the call for elections. The coup discourse maintains that Añez’s government is only transitory, and that it has only come to “pacify” and call for “free elections”.

The form of convocation of those elections and the conditions of participation are what is being debated. The de facto government has the dilemma of the parliamentary majority of the MAS, a stumbling block to advance in the designation of new authorities of the Supreme Electoral Tribunal.

However, the decision that seems to be taken would be to form an “interim electoral body elected by consensus,” as it appeared in the proposal presented by former Bolivian President Tuto Quiroga. In such a proposal, Evo Morales would not be able to participate.

The electoral necessity has also been stated by Carlos Mesa, who publicly requested that the call be made and that the MAS recognize the de facto government.

This election is a necessity for two reasons. First, because the coup d’état seeks to present itself as institutional and democratic, and, therefore, part of that construction demands a way out through the votes. Secondly, because the pressure of the mobilizations creates a situation that the coup cannot control.

An example of this is the city of La Paz, where there are food supply difficulties. The question of timing is one of the determining factors, and the de facto government, the real powers of the coup, know that it would be difficult to maintain this situation of self-proclamation for long. Before calling elections, they are trying to generate all the conditions of persecution and proscription that they need in order to win.

#Urgent militarizing Senkata, in El Alto, militarizing Plaza Murillo, in La Paz, Evo Morales denounces that the de facto government seeks to close the Legislative Assembly. The coup is nationally sustained on the power of the Armed Forces and the persecutions #GolpeDeEstadoEnBoliva
#19Nov

#Urgent in Bolivia they are killing people in El Alto with a militarized repression. The United States, the right-wing governments with their silence, Almagro, the big media with their campaign to legitimize the coup, all are accomplices or direct part of this massacre. #19Nov