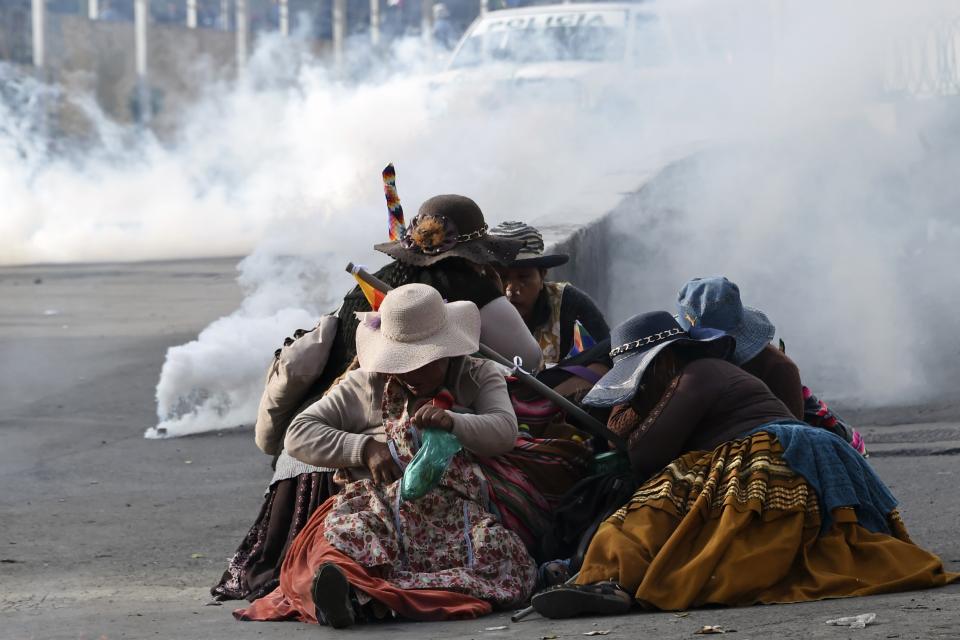 Twenty-four people have been murdered in Bolivia, in a context of intense repression. Image AFP

The threat in Bolivia now targets the Legislative Branch. The minister of the de facto government, Arturo Murillo, appointed by the self-proclaimed Jeanine Añez, announced that there are senators and deputies “who are engaging in subversion” and that their names will be published on Monday.

The persecution would also include prosecutors who have been convened for this purpose, denounced Congresswoman Sonia Brito, of the Movement to Socialism party (MAS) which holds the majorities and presidencies in both houses.

Murillo’s statements reinforced the situation of persecution in Bolivia. In fact, she announced that she was initiating a “hunt” for three former government officials, and communication minister Rosana Lizárraga had condemned and threatened journalists for sedition.

This situation was reinforced by a decree that exempts military personnel who participate in operations “to restore order” from criminal responsibility. That decision was backed by Defense Minister Fernando López, who claimed it was due to the existence of “armed subversive groups” and “foreign armed groups” with “large caliber weapons”.

López’s statements were in response to criticism from the Inter-American Commission on Human Rights, which questioned the “grave decree” for “ignoring international human rights standards” and for “encouraging violent repression.

The set of threats formalizes a pattern of persecution and assassinations that began before the forced resignation of President Evo Morales and Vice President Álvaro García Linera took place. In fact, days before the coup, there had been documented burning of homes, kidnappings of families and direct threats against deputies, governors and MAS leaders.

Twenty-four people have been murdered in Bolivia in five days. The report was presented by the Ombudsman’s Office and ratified by Morales, who demanded “that the de facto government of Añez, Mesa and Camacho identify the intellectual and material authors,” and denounced to the international community “these crimes against humanity that should not continue in impunity”.

It was in this context that the European Union (EU) ambassador, León de la Torre, met with the self-proclaimed Añez. The facilitator stated that the EU is offering itself so that “Bolivia can hold credible elections as soon as possible”, and stated that it will support the “transitional period”.

The EU facilitator’s statements coincided with those of the UN envoy, Jean Arnault, who met on Saturday and also offered himself as a mediator to speak with “all the leaders and actors” in order to “pacify” and call for “free elections”.

The self-proclaimed Añez also briefly referred to the electoral question: “very soon we will give news about our main mandate, the call for transparent elections and the recovery of our country’s democratic credibility”.

The lack of clarity regarding the election coincides with the process of attacking the Legislative Power announced by Murillo. In effect, the de facto government has the problem that this power is in the hands of the majority of the MAS, and its approval is necessary to achieve an important goal: the appointment of new authorities of the Supreme Electoral Tribunal, to then call elections.

Those who are at the forefront of the coup d’état are faced with a decision: to try to reach an agreement with the MAS bloc to achieve the elections of the electoral authorities and the new elections, or to advance on the legislative power. That second option is the one that has been imposed with Murillo’s declarations, in what is a strategy of persecution against deputies and senators to force a decision in favour of the de facto government’s plan.

The threats occur within the framework of a license to kill, impunity for murder, rupture of the rule of law, 24 deaths, hundreds of wounded, and a protection by the mainstream media and publishing houses that, complicitly, deny that there is a coup d’état in Bolivia.

This scenario has not stopped the massive social protests that have taken place in different parts of the country, as well as those that have been predicted to take place. A town hall was held in Sacaba – the site of the massacre where nine people were murdered during the repression – and there it was determined to demand “the resignation of the self-proclaimed de facto president Jeanine Añez within 48 hours”.

The city council also approved the demand for the “immediate withdrawal of the Armed Forces,” as well as the “approval of a law by the Plurinational Legislative Assembly that guarantees national elections within ninety days”.

A massive assembly also took place in El Alto, and one of the most complex protests for the de facto government to address: the blockade of access to the Bolivian Fiscales Yacimientos Petrolíferos Fiscales plant, in Senkata, from which gasoline and liquefied gas are produced. This action has generated supply difficulties in the city of La Paz, which has been in a state of deep disruption for more than a week.

So, one week after the resignation of Evo Morales and García Linera, Bolivia finds itself under a three-pronged scenario: the persecution carried out by the putschists at every political and social level, the question of what will happen in the Legislative Power, and a situation of increased uprisings against the coup. The electoral exit, which seems to be the only common point, still remains unclear.

In #Bolivia the de facto government announces that it will persecute MAS senators and deputies. Meanwhile, the uprising intensifies and the siege of La Paz is announced. Here is a synthesis of the situation in 2mn. #GolpeDeEstadoEnBoliva #MasacreEnBoliva