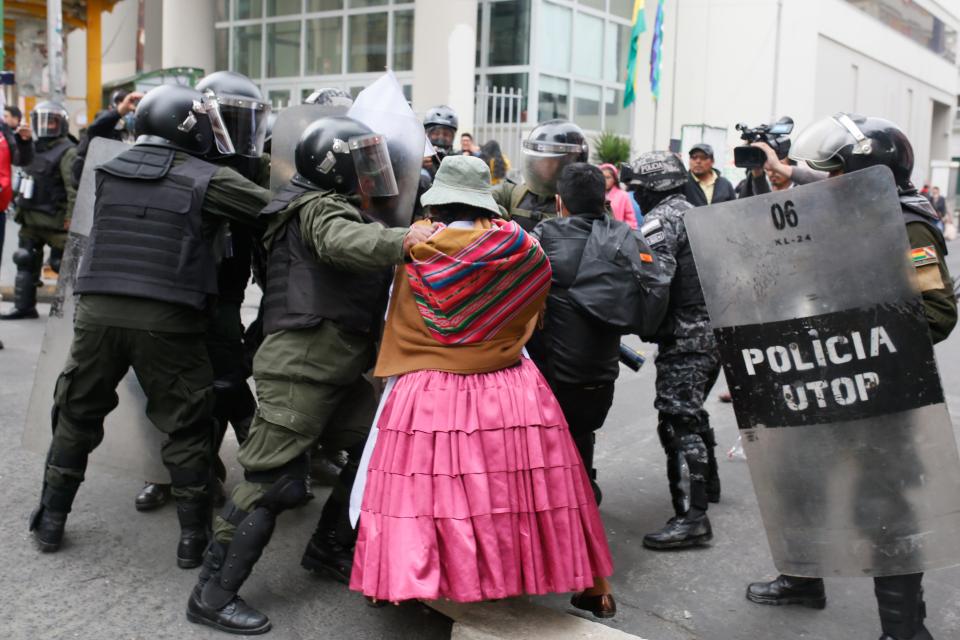 Like a thick night fog, hatred voraciously runs through the traditional urban middle class neighbourhoods of Bolivia. Their eyes are filled with anger. They do not shout, they spit; they do not demand, they impose. Their songs are not about hope or brotherhood, they are about disdain and discrimination against the Indians. They ride their motorcycles, get into their trucks, gather in their carnival fraternities and private universities, and go out to hunt for rebellious Indians who dared to take their power away from them.

In the case of Santa Cruz, clubs in hand, they organize motorized gangs in SUVs to teach the Indians, whom they call “collas”, who live in the marginal neighborhoods and in the market areas. They chant slogans that “you have to kill collas”, and if they come across a woman with a pollera on the way, they beat her, threaten her, and order her to leave their territory. In Cochabamba they organize convoys to impose their racial supremacy in the southern zone, where the lower income classes live, and they charge – like a cavalry detachment – against thousands of defenseless peasant women who march asking for peace. They carry baseball bats, chains, gas grenades; some have firearms. Women are their preferred victim; they grab a mayoress from a peasant population, humiliate her, drag her down the street, beat her, piss on her when she falls to the ground, cut her hair, threaten to lynch her, and when they realize that they are being filmed they decide to paint her red, symbolizing what they would do with her blood.

In La Paz they are suspicious of their servants and stop talking when these bring food to the table. Deep down they fear them, but they also despise them. Later they go out shouting into the streets, insulting Evo and, with him, all those Indians who dared to build intercultural democracy with equality. When they have a crowd, they drag the Wiphala, the indigenous flag, spit on it, trample on it, tear it, burn it. It is a visceral rage discharged against this symbol of the Indians, one they would like to wipe out of existence along with all those who identify with it.

Racial hatred is the political language of this traditional middle class. All their academic titles, traveling and faith are redundant because, in the end, everything comes down to ancestry. At bottom, their imagined racial lineage is stronger and seems impossible to dissociate from the spontaneous language of their hateful skin, their visceral gestures and degenerate morality.

Everything exploded on Sunday the 20th, when Evo Morales won the elections with more than 10 points head of the second placed candidate, but no longer with the immense advantage he had previously or 51% of the votes. It was the signal the reactionary forces were waiting for: from the hesitant liberal opposition candidate, the ultraconservative political forces, the OAS and the ineffable traditional middle class. Evo had won again but no longer had 60% of the electorate he used to; he was weaker and the enemy went after him. The loser did not recognize his defeat.

The OAS spoke of “clean elections” but of a diminished victory and recommended a second round, deprecating the Constitution, which establishes that a candidate is elected if they have more than 40% of the votes and more than 10% of votes over the second placed candidate. And the middle class set out hunting for Indians. On the night of Monday October 21st, 5 of the 9 main electoral centers, including ballot papers, were set on fire. The city of Santa Cruz decreed a civic lock out organized with those who lived in the city center, later extended to residential zones in La Paz and Cochabamba. And then the terror started.

Paramilitary gangs began besieging institutions, burning labor union headquarters, setting fire to the homes of candidates and political leaders of the governing party. Even the president’s own private home was looted. Elsewhere families, including children, were kidnapped and threatened with flogging and burning if their father, minister or union leader did not resign. A long night of long knives had been unleashed, and fascism came into the open.

When the popular forces that had mobilized to resist this civil coup began to retake territorial control of the cities with the presence of workers, mining workers, peasants, indigenous people and urban settlers – and the balance of the correlation of forces was leaning towards the side of the popular forces – then at that point came the police mutiny.

For weeks, the police had shown great indolence and incompetence protecting low income people when they were being beaten and persecuted by fascist gangs. But as of Friday, defying the civilian authority, many of them showed an extraordinary ability to assault, detain, torture and kill popular demonstrators. Of course, while before they had to deal with the children of the middle class then, supposedly, they were unable to do so; however, now that it was a question of repressing unruly Indians, the deployment, arrogance and vicious repression were monumental.

The same thing happened with the Armed Forces. Throughout our government, we never allowed them to go out and repress civilian demonstrations, not even during the first civic coup attempt in 2008. And now, in the midst of the convulsion and without us making any request, they informed us they had no riot control capacity, that their troops had only 8 bullets each and that they needed a presidential decree in order to deploy in the streets as a dissuasive measure. However, they had no hesitation to requesting and imposing President Evo’s resignation, breaking the constitutional order.

They did their best to try to kidnap him while he traveled to the Chapare and on his arrival there; and when the coup was consummated they went out into the streets shooting thousands of bullets, militarizing cities, murdering peasants. And all this with no presidential decree. But they said they needed a decree in order to protect the Indians. To repress and kill Indians, all they needed was to obey the demands of race and class hatred. And in just 5 days there are more than 18 people dead and 120 wounded by bullets. All of them indigenous people, of course.

The question we all must answer is how could this traditional middle class incubate so much hatred and resentment towards people, leading them to embrace racist fascism focused on the Indians as their enemy? How did this hatred radiate its class frustration into the police and the Armed Forces and become the social basis for this turn to fascism, this degeneration of the state and moral corruption?

It constitutes the total rejection of equality, that is, the rejection of the very foundation of substantive democracy.

Over the last 14 years of government by the social movements in Bolivia, they have had as their main characteristic the process of social equity, the abrupt reduction of extreme poverty (from 38% to 15%), the expansion of rights for all (universal access to health, education and social protection), the Indianization of the State (more than 50% of civil servants have an indigenous identity, a new national narrative around the central indigenous reality), the reduction of economic inequalities (the difference in income between the richest and the poorest falling from 130 times to 45 times), That is, the systematic democratization of wealth, access to public goods, opportunities and state power.

The economy has grown from US$9 billion to US$42 billion, expanding the national market and domestic savings, which has allowed many people to own their own home and improve their work. But this led to the percentage of people in the so-called “middle class”, measured in income, rising from 35% to 60% in a decade, most of them coming from popular, indigenous sectors. It has been a process of democratization of social goods through the construction of material equality but which, inevitably, has led to a rapid devaluation of the economic, educational and political capital possessed by the traditional middle classes.

Whereas before a notable surname or the monopoly of established knowledge or the family relations characteristic of the traditional middle classes allowed them to reach posts in public administration, to get loans, public contracts or academic scholarships, Today, the number of people fighting for the same job or opportunity has not only doubled – reducing by half the possibilities of access to those goods – but also, the arrivistes, the new middle class of indigenous popular origin, has its own new capital (like indigenous language, labor union links) of greater value and also with state recognition so as to be able to compete for the available public goods.

There was therefore a collapse of what characterized colonial society, namely, ethnicity as capital, that is, the imaginary foundation of historical middle class superiority over the subordinate classes. Because here, in Bolivia, social class is only understandable and becomes visible only as racist hierarchy. The fact that the children of this middle class have been the shock force of the reactionary insurgency represents the violent cry of a new generation that seeing their inheritance of fancy surnames and their white skin evaporates with the democratization of public goods.

Thus, although their false banners are those of electoral democracy, in reality they are in revolt against democracy understood as equality and fair distribution of wealth. Because racist supremacy is irrational, it is lived our as primarily as a bodily impulse, as colonial history imaged thought one’s skin. Hence, fascism is not only expresses a failed revolution but, paradoxically too, in post-colonial societies, the success of material democratization.

So it is not surprise that while the Indians collect the cadavers of over twenty people shot dead, their material and moral aggressors tell us they killed them in order to safeguard democracy. In reality they know all they have done is to protect the caste privilege of their surnames.

Racial hatred can only destroy. It is not a horizon for the future. It is nothing more than a primitive vengeance of a decadent class in historical and moral decline that reveals that a consummate coup-supporter is crouched behind every mediocre liberal.