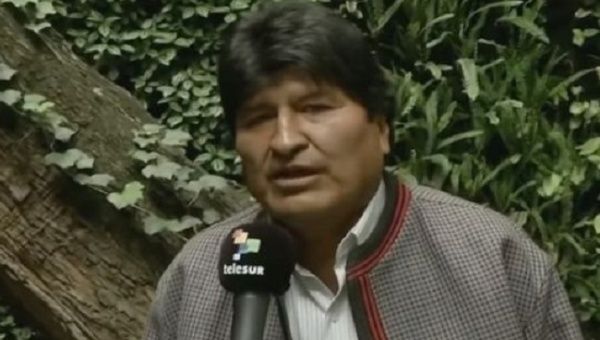 In an exclusive interview with teleSUR, the Bolivian President said that “the people will resist this dictatorship with great courage, force, and energy.”

The legitimiately-elected President of Bolivia, Evo Morales, told teleSUR on Saturday that the dictatorship has returned to the South American country, given the recent events that triggered intense repression exerted by the de-facto government chaired by Senator Jeanine Áñez .

“The Bolivian people and the whole world know that we guarantee political stability. They said ‘Evo dictatorship’, now what Bolivia is living in is what we call a dictatorship.”

The Bolivian President said he was appalled by the recent reports regarding the civilian deaths at the hands of this new dicatorship.

“The people will always be united (…) The Bolivian people have never been taken from my memory. At any moment we will be as always sharing a resistance against economic policies, but for now, for democracy, for life, my dear Bolivia,” President Morales said.

On the media censorship imposed by the de-facto government in Bolivia, President Morales said that “now there is no freedom of expression” in the country. “The de facto communication minister who answers to the dictatorship in Bolivia said that seditious journalists, national and international, will be arrested.”

He also highlighted how the integration processes promoted by past governments such as those of Venezuela, Ecuador (by former President Rafael Correa) or Brazil (with former president Lula da Silva) seek to be destroyed by the interests of the U.S. empire.

“Unfortunately, some countries subject to the U.S. empire, destroy the integration processes: Unasur a political instance, Mercosur an economic instance, Celag an integration of all Latin America towards the liberation of the peoples,” President Morales continued.

In this sense, the legitimate President of Bolivia stressed that “we, Latin Americans, have the enormous responsibility, regardless of an economic, programmatic or social liberation, to free ourselves from the technological part.”

“Those who seek disintegration are not thinking about technological liberation, they are instruments of the capitalist system that will never like us to free ourselves from the technological part to establish sovereignty in our Latin America,” he added.