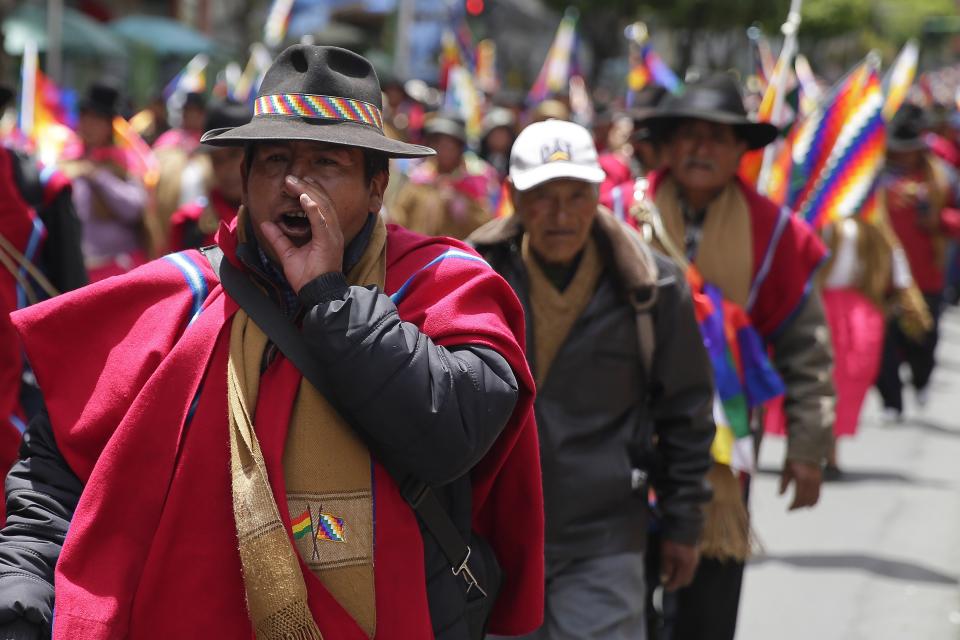 On November 10, 2019, I saw on my cell phone, while browsing social networks, the centennial presence of Ponchos Rojos who were armed and running through the streets of El Alto (a region of the Bolivian antiplane from which one descends to the capital, La Paz), who moved quickly and chanted in the formation of war. I then remembered events from the past, from 1995, that moved me to that mountainous region of Alto Peru.

In 1995, I taught a week-long course in the main hall of the old, public and century-old University of San Andrés to some 700 enthusiastic students on the Four Essays of Karl Marx’s The Capital. On the third day of the conferences, the rector and the University Council awarded me an honorary doctorate from the University.

In addition, the students informed me that a young revolutionary, the partner of a Mexican colleague, was imprisoned and I went to visit him for solidarity. Years later, the prisoner thanked me in a public act for my gesture of solidarity, and this young revolutionary, without my knowing it, was none other than Vice President Álvaro García Linera, a great intellectual and politician.

But thirdly, thanks to Dr. Juan José Bautista, a Bolivian colleague, I was invited to give presentations on Liberation Policy to a group of Aymara Indians in El Alto de La Paz. I remember the welcome and the dialogue with those hardened comrades. At the end of the events, and in view of the unexpected offer, I was told that they had decided to invite me, taking into account the content of my presentations, to be part of the Ponchos Rojos community. At that moment I noticed that everyone was wearing these “ponchos”, a garment typical of the Andes of the millenary custom with which the native peoples and the gauchos defend themselves from the cold. I was then invested with this high dignity. It was a great honor for me, and I remember expressing: “This poncho is more important than a doctorate at Harvard”, and I repeat it even today thinking that in October 2019 I was awarded the honor of being a member of the American Academy of Arts and Sciences which was founded in 1780.

The truth is that these Ponchos Rojos have been set in motion. This is one of the first signs of an uprising of the Bolivian people before the minority violence that tries to cover the sun with a finger, violently racist, and evangelical fundamentalists (as the right-wing Catholics in Chile were with A. Pinochet) that wield crucifixes (as we have seen on the front page of La Jornada of November 11) before representatives of the indigenous peoples. That scene reminds us of Franz Hinkelammert’s work, The Ideological Weapons of Death, whose theme is the use of an ideology, employed by the right-wing Catholics in Chile, who massacred the Chilean people. How can the bible or the crucifix be used to spill the blood of the original peoples, shouting: “We will take Pacha Mama out of public places and replace her with the Bible”?

They are pro-American fundamentalists now, formerly Eurocentric Catholic fundamentalists. Both have deformed and inverted the Christianity of the first centuries, of a Messiah who declared “blessed are the poor”, and who was judged by the empire of the day (Roman) contrary to the law, raising the people against the order, for which the torture of the cross (the “electric chair” of that time) was a punishment. The Cross (wielded by the policeman in the photo of La Jornada) is the sign of the death of that master (Rabbi) who fought for the poor in the face of Roman oppression. On the cross the poor Bolivian people are crucified. The leadership of governments like Evo Morales improved their living conditions, which means that they are no longer as poor as before. But the right wing (which inverts the meaning of Christianity) is turning to that Messiah (Cristós) who was crucified by the Empire for mobilizing the poor, as a weapon to kill the poor, the victims, the Aymara, the “cholas” (women) humiliating them. This is how Christianity starts to walk with its head, inverting the wisdom of the peoples in the name of a right-wing fascist ideology, and fundamentalist Christianity in Latin America (as there are also Islamic or Jewish fundamentalisms).

A theory of Latin American liberation reverses investment and puts commitment first in favour of the poor. But it is considered subversive in Bolivia.

I can only rejoice that my comrades Ponchos Rojos have taken action, as the vanguard of the awakening of the millenary Aymara, Quechua and Amazonian Bolivian people; events will have to be followed with care, since at the end of the twentieth century they moved from their origins towards our history and it seems that they will do so again in the face of racist, macho minorities, formed by North American schools (both religious and military) that turn their backs on the suffering of the people and are determined to dominate them again.

Meanwhile, Evo Morales is welcomed by the generous and courageous will of the Mexican people who are beginning to exercise a new leadership role among Latin American nations in view of their Second Emancipation, to which the Fourth Transformation is heading, not from Spain or Portugal, but from the United States, as was suggested by José Martí and José Carlos Mariátegui.

Thousands of Bolivians from different cities of the country mobilized in La Paz to show their rejection of the coup d’état against the government of Evo Morales, the police repression, the silence of the media in the face of this situation and the serious acts of racism and xenophobia. teleSUR.