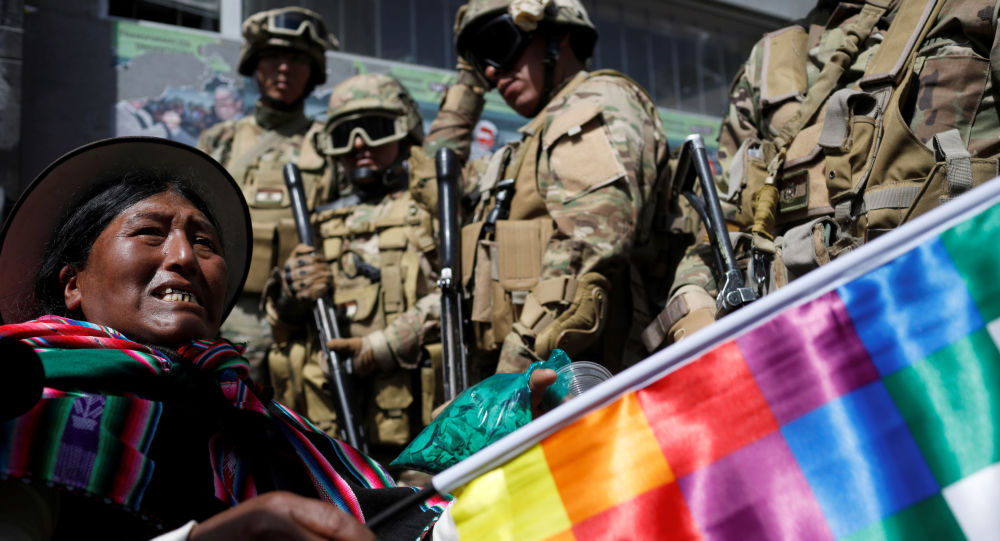 “…and that the seditious ones that promote the instability of the Government be taken care of….He who tries to make sedition, from tomorrow, let him take care of himself”…

These were some of the warnings that Arturo Murillo, the new Minister of Government of the coup regime, transmitted to the population a few minutes after being positioned on Wednesday 13th in the evening hours.

Unfortunately, they were not simple warnings, as we painfully noted again on Friday, November 15, with the murder of eight other people and at least 33 confirmed wounded of the estimated 70, all sisters and brothers cocaleros peasants of the Tropic of Cochabamba.

They were massacred with weapons of war by police and military, thus halting their decision to reach the central plaza, the 24th of September, in the city of Cochabamba to protest against the Civic Police Coup and demand the restitution of the violated constitutional order.

These deaths are in addition to those already produced in other regions in resistance in the country, such as Yapacaní and Montero in Santa Cruz, the city of El Alto and the slopes of the city of La Paz, among many others. In this context, the coup d’état process and its new authoritarian government is estimated to be responsible for at least 18 deaths, more than one hundred wounded, and almost half a thousand detainees. It is the purest style of the military dictatorships of the last century, only with the difference that today they are presented with a pseudo-democratic discourse.

In parallel with this situation there has been the alignment with the Civic Police Coup of the country’s main media networks and the silencing of alternative and / or popular community media.

This situation intends to provoke the invisibilization of the popular uprising in the country. But also the manipulation and distortion of the facts, when for example, although it was confirmed that the deaths were caused by ammunition for military use, it has also been suggested that they were self-inflicted by the peasants themselves to generate a social explosion of greater magnitude or, as it has been written that they were the result of crossfire confrontations.

In this context, and in different corridors and almost clandestine spaces, several journalists, anonymously, are denouncing having been victims of threats against their lives and that of their families. A journalist in Cochabamba has even denounced that she was the victim of an explosive device attack on her home, in retaliation for reporting the excessive violence of the forces of law and order against the popular and peasant sectors in this city in the centre of the country.

Faced with this reality, the use of social networks has become an alternative information and communication tool to the controlled formal media system. The networks are breaking with the traditional media verticality, exercising a democratic and horizontal practice of the right to communication and information.

For example, days ago, when the political centre of the city of La Paz was occupied by more than 15,000 Aymaras demanding respect for Wiphala and the restitution of constitutional order, the channels of the country’s main television networks made this fact invisible. They showed out of place content such as films and series, and then highlighted in their news the shameful self-appointment of Jeanine Añez as president, with a filter of “democratic transition” and not of coup d’état.

Only social networks break this manipulation of information, so they have also become the target of the coup installed, attacking Internet connections and closing dozens of pages.

Thus, in these moments of acute political and social crisis, the entire population has somehow exercised the role of journalists and communicators to reflect their own reality thanks to the tools provided by new technologies. In conclusion, Social Networks have allowed us to break with the informative siege of what is happening in Bolivia.

(Crying) “…we just wanted to give our opinion… People have been killed. Please help us, the police cannot kill us. Why don’t they take care of us, like they took care of the lords of the centre (the opponents of the city when they were blocking). Why have they released the military to kill their own people? Aren’t the people of the Tropics your people, Madam President? Tell me, isn’t this your town to send us to kill?” (Words of a peasant woman from the Cochabamba Tropics during the conflict in Sacaba)

These words reflect the true reality of what Bolivia is currently experiencing. But of course, the voice and the image of pain and despair shown in the hundreds of videos recorded with simple home cell phones will not be broadcast by any of the country’s television networks. However, they were taken by the people and now they are being shared and will reach thousands and we expect millions of people in spite of the media and informative siege that the coup process is implementing.

Along these lines, let us remember that the new Minister of Communication, Roxana Lizárraga, threatened to expel and prosecute foreign and Bolivian “journalists or pseudo-journalists” “who are making sedition. We should note that it is the second national authority as minister to use the word SEDITION, which refers to the idea of an uprising of a group of people against a government in order to overthrow it.

Do we wonder if the word sedition should be used to reflect the uprising and mobilization of the Bolivian people?

At this point in time, there is not the slightest doubt that a Civic-Political Coup was planned and activated in Bolivia. But unlike the military coups d’état of this century (Honduras, Paraguay, Brazil), it is worrying because it is presented with an enormous fascist, racist and macho charge against the indigenous, the peasant, the original peoples and women.

We therefore call on the international community to denounce this fact and to activate all legal and juridical mechanisms to protect human rights and people’s lives. And especially the individual and collective rights of indigenous peoples, as well as to defend the progress made in these more than 13 years of the Process of Change.

Finally, we call for the precaution of the population’s right to communication and information so that the truth is reflected. Guaranteeing the exercise of journalists, popular and indigenous communicators is an essential right for a democratic society.