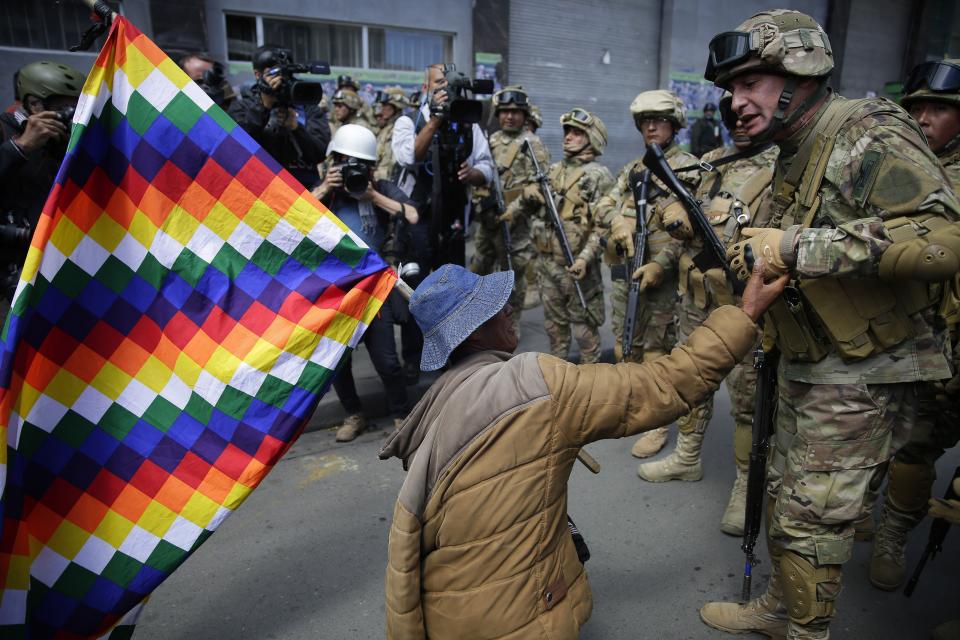 Those who lead the coup d’état made a mistake so profound that there is no longer anything that can stop the escalation that pushes towards the city of La Paz.

Each night there are vigils, fires, an unwavering decision: the historic, Aymara, ancient, and more recent memory of the 2003 uprising where sixty people were killed.

“You are leaving, I am staying in this hell,” was the phrase that the taxi driver said when he dropped me off at the El Alto airport in the early hours of freezing rain, after wandering through the labyrinths of a city that was rising. This is not a metaphor: Monday, the first day, was apocalyptic.

There were dozens of blocks with barbed wire, groups with sticks at each corner, columns coming from different districts, multitudes with sticks, stones, slingshots, hats, police stations burning, fury, as I have rarely encountered in my life. And blood, a lot of blood on the ground, in videos, in words.

Since Monday there are Whipalas flags in all the streets of El Alto and they come down day after day. Every night there are vigils, fires, an unbreakable decision: they activated the historical memory, the ancient Aymara, and the more recent one, of the uprising of 2003 where sixty people were murdered. “Mesa, October is not forgotten”, is the memory of El Alto against the bullets and the resignation of a government.

Those who lead the coup d’état made a mistake so profound that there is no longer a conciliatory stage that can stop the escalation that pushes from different corners of the country to the city of La Paz, center of political power. There have been several demands that converge towards a common enemy synthesized in four components: Fernando Camacho, Carlos Mesa, Jeanine Añez and the Bolivian National Police.

The principal demand is the resignation of the self-proclaimed Añez, and the radicalization stems from the exclusionary, anti-indigenous character of the coup d’état that was condemned for the disrespect of the Whipalas and the aggressions against women for wearing polleras, in other words, being Indigenous.

These are the slogans that accompany each mobilization that enters La Paz from El Alto, from the inhabitants of that city, from the highlands, tropics, mines, and yungas. They enter through El Prado Avenue up to Murillo Square, the place where the coup d’état materialized in terms of facts and symbols.

Those who carried out the coup made a mistake and unleashed a reaction that was not included in their variables in such magnitude. The first response to the escalation was from the Bolivian Armed Force (FAB) that took to the streets in a de facto state of siege. Military planes, helicopters, now with Whipala, began to circulate in La Paz, El Alto, the country’s highways.

What is the plan of those who led the overthrow? That is the central question. The steps would be three-fold. The first, achieved, was to overthrow the government headed by Evo Morales and Álvaro García Linera. The second, partly consummated, was to build an institutional fiction that materialized in Añez’s self-proclamation, the appointment of ministers and high military and police command.

This second step has yet to be resolved: the bicameral legislative power in the hands of the Movement Towards Socialism (MAS), holding a two-thirds majority and which elected new presidencies. The coup architecture must resolve how to move in the face of this scenario: undo the legislative power in an act of coup consummation, or seek a point of agreement with the MAS.

That agreement has to do with the third step, the call for elections. The coup strategy seems to have contemplated this exit from its genesis: it is not a coup that proclaims a general commander or a junta for an indeterminate time, but rather it seeks to present itself as constitutional and promising an election in a short time.

That then means opening the electoral channel having generated the necessary conditions for that date. These are the conditions that began before Morales was overthrown, namely persecution, assassinations, massacres, to which are now added detentions within the framework of a rupture of the rule of law and absolute impunity. The government minister designated by the self-proclaimed has said so, the “hunt” has begun.

The evolution will depend, among other factors, on the pressure on the streets, as well as on the political/parliamentary strategy of the MAS. One of the points is whether the coup plan – heterogeneous and in dispute within – will seek to proscribe the MAS or allow it to stand in a situation of persecution of its cadres and leaders.

The other central question is: what is the strategy of resistance to the coup? Some answers are contained in the manner in which the confrontation with the coup escalation unfolded: without clarity of command that could order an articulated scheme, particularly in the last few days. The massive mobilizations, in the escalation phase, postponed the outcome without being able to stop it, while inside pillars of support were detached until they reached the FAB.

This has three central aspects. First, that the figure of Evo Morales, his defense and return, is not a unifying demand, at least for the moment. Secondly, that the leaders in the movements are, in many cases, going through scenarios of attrition and divisions. The translation in El Alto is a great power and radicalism with no leadership capacity.

Third, building a strategy that articulates movements -such as those that are part of the National Coordinator for Change- to the Bolivian Central Workers’ Union, to the parliamentary space, within a joint plan, is a task as essential as it is complex.

Many questions at this hour can only remain unanswered. The scenario is of an offensive coup that needs to be consolidated, that measures the responses to the repression and militarization of the country, and that has the central support of the great majority of the country’s media.

The information lockdown inside Bolivia is extensive, each person interviewed thanks the international press for being there. Bolivian journalists who do not align themselves with the coup narrative are threatened in their homes, on the phone, at work. The de facto minister of communication affirmed that she will persecute “journalists and pseudo-journalists” for “sedition”. Every dictatorship needs media that reproduce the narrative and a cone of silence.

24 dead in #Bolivia according to the ombudsman’s office. I dare to think that they are more, that a part of what happens in the country away from cameras is not being recorded. Impunity is immense, as is the plan for revenge and restoration of the coup #MasacreEnBolivia #16Nov

#MasacreEnBolivia: 9 people were murdered in Cochabamba by the repressive forces of the State. They are all shot in the head or chest. 115 wounded, 1 with cerebral palsy. Source: representative of the Ombudsman’s Office for Sacaba, Cochabamba.

Pain and rage in Cochabamba. Radio “Kausachun coca” of the Chapare confirms seven dead. Two of the wounded referred to the Viedma hospital have just died, in addition to the five at the Sacaba hospital. #GolpeDeEstadoEnBoliva