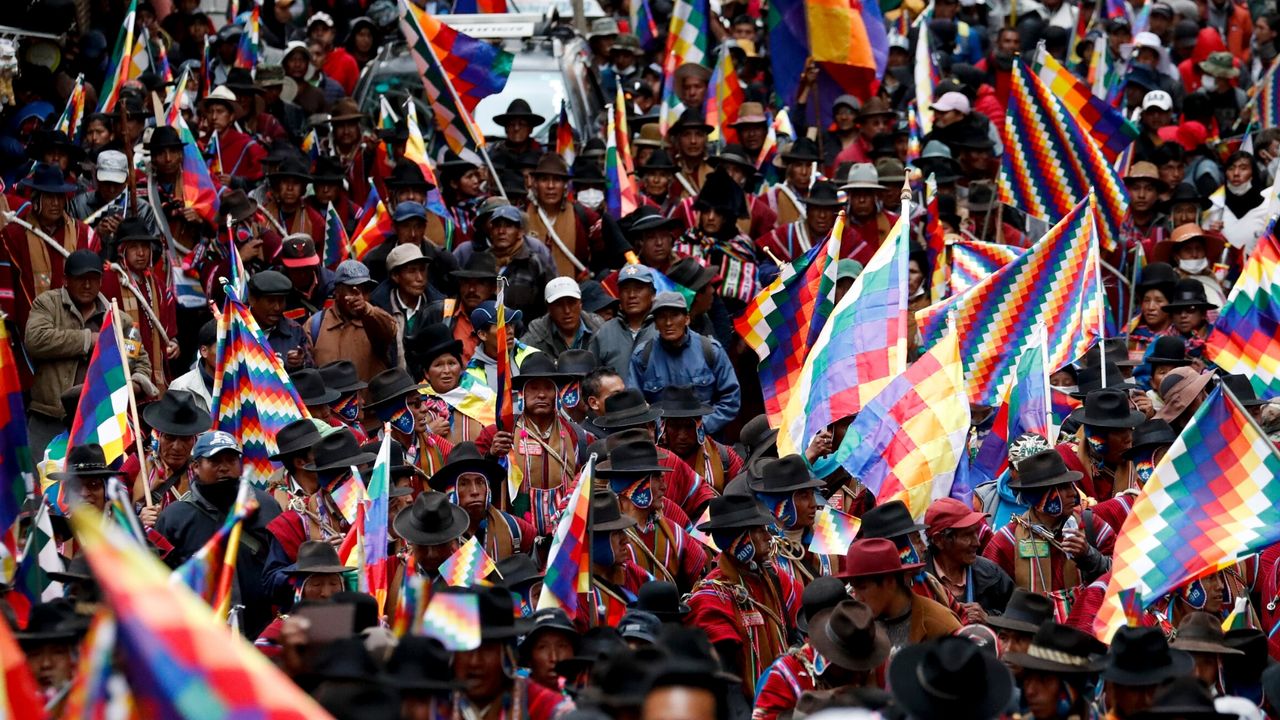 During the colonial era, Cerro Rico de Potosí in Bolivia was the focus of Europe’s looting of gigantic quantities of silver ore. At the beginning of this century, specifically in Cochabamba, the transnational water privatization plan was woven, with the authorship of the Bretton Woods institutions and the faithful accompaniment of then-president Hugo Banzer.

Following this line, the Bolivian State, under the presidency of Evo Morales, found itself immersed in a series of global corporate pressures and aggressions. From an attempt to Balkanize Bolivian territory in 2008, to the recent cycle of armed violence that, with police and military support, consummated the coup d’état.

However, in the face of every offensive by the elites, the Bolivian people have responded with gigantic street demonstrations. And perhaps the social and class conflict that developed in Bolivian territory in 2003: the “Gas War” will serve as a sufficient example.

The Alteños were protagonists in the “Gas War,” a social and political conflict that was significant for the contemporary history of Bolivia.

The plan of privatization and sale of gas to the United States undertaken by the government of Gonzalo Sánchez de Lozada (of which Carlos Mesa was the vice-president), met with the strongest resistance in the municipality of El Alto, where the Dantesque “October Massacre” would take place.

Both in the era of privatizations and in the current events, El Alto has been a bastion of struggle and resistance in the anti-democratic, commotion and fascist onslaught scenarios.

El Alto: “October is not forgotten”

In the contemporary history of Bolivia, El Alto has been characterized by a powerful organization among its inhabitants.

When the potable water services transnational “Suez”, in alliance with the company Aguas del Illimani, refused to make investments to expand the service in El Alto, the service rates increased considerably. As a result, the people of El Alto joined an indefinite strike that forced the government of Carlos Mesa to conclude the contract with the transnational.

The strike had great economic repercussions, so much so that the French water company withdrew from Bolivia. It pressured the Bolivian state to obtain soft loans in order to expand its concessions and thus its profits.

Part of the arguments of the people of Alteño in the face of this situation was that these credits should go to a national public company and not to a transnational company that centralized profits.

Likewise, in the full growth of energy demand with the use of oil and gas, Bolivia was not lagging behind in corporate plans for the management of these energy sources.

In 2003, after several decades of exploitation of its strategic resources, the Bolivians in El Alto joined together to stop the unjust management of these resources, holding multiple demonstrations to demand that gas be directed towards national development.

Gonzalo Sánchez de Lozada, popularly known as “Goni”, ordered the Armed Forces to combat the protests. By October 13 of that year, the intense repression had claimed the lives of more than 60 Alteños, leaving more than 500 wounded.

The Armed Forces repressed the Alteños during the “Gas War” using tanks and other heavy weapons.

It should be noted that during this political crisis, on the international front, the Organization of American States (OAS) gave its support to “Goni”, completely ignoring the human rights violations of his government. In El Alto, protests in defense of natural resources continued, and popular organizations established a scheme of self-defense groups, blockades, and permanent mobilization.

Days after these events, specifically on October 17, “Goni” resigned and fled the country with the help of the United States. This is how the people of El Alto demonstrated their strong organization and forcefulness against the imposition of corporate measures. It is the epicenter of a series of historical demands of the Bolivian people.

Currently, in the face of the coup offensive, El Alto has done the same.

Since the beginning of the change of regime, El Alto has demonstrated against the actions of Luis Fernando Camacho and in support of Evo, configuring a situation of counter-coup that has been forcefully reprimanded by the military and police.

On November 5, at the International Airport, the Alteños forced Camacho’s return to Santa Cruz, blocking his intention to approach the Palacio Quemado to bring a letter of resignation to Evo.

In synchrony with these events, the anti-coup mobilizations were strengthened by the initiative of the Federation of Neighborhood Councils of El Alto (FEJUVE), which gave Camacho 48 hours to leave his spaces, showing a rejection of the destabilization and violence perpetrated by fascist armed groups.

The police, who turned their backs on President Morales, continued to carry out riots and reprimands against the supporters of MAS. Faced with this, FEJUVE assured that they would build a Civil Union Police to protect citizens from the waves of violence directed by the security agencies.

As for the Bolivian Armed Forces, which give the final blow to Evo, they initiate a wave of repression of the population that goes out into the streets to denounce and reject the coup d’état and violence. The thousands of peasants of El Alto, armed with sticks and carrying the Wiphala, shouted the slogan “now yes, civil war”.

The anti-coup protests have persisted to date, despite the attacks of the security forces against the indigenous people, and with the planes of the Armed Forces flying over the municipality, replicating the modus operandi of “Goni” in the middle of the “Gas War”.

Demonstrations of El Alto against the self-juramentation of Áñez

With an empty Plurinational Legislative Assembly, without quorum, the opposition senator, Jeanine Áñez, proclaimed herself President of Bolivia and made symbolic use of the Bible in the process of breaking the constitutional order.

With the Bible in hand and violating the Constitution from end to end, Senator Jeanine Áñez proclaimed herself president.

In addition, neighborhood leaders from the city of El Alto and the other provinces announced mobilizations to the city of La Paz. On Wednesday, Áñez named a new military high command who was sworn in in front of an altar of crosses, in the middle of the repression of the protests in La Paz.

At the same time, the MAS bench tried to enter the Assembly, but the police prevented the passage, making barriers, using force and even using chemical agents. Even the president of the Senate, Adriana Salvatierra, of the MAS party, was blocked from access to prevent Jeanine Áñez’s self-proclamation from losing its effect.

The conscious destruction of the line of presidential succession that led to the self-proclamation of Áñez is explained by the counter-coup in El Alto, a situation that has been repressed to sustain the coup and undermine the mobilization that, as in 2003, threatens the crystallization of a new offensive by the elites.

Read the original in Spanish with links>>