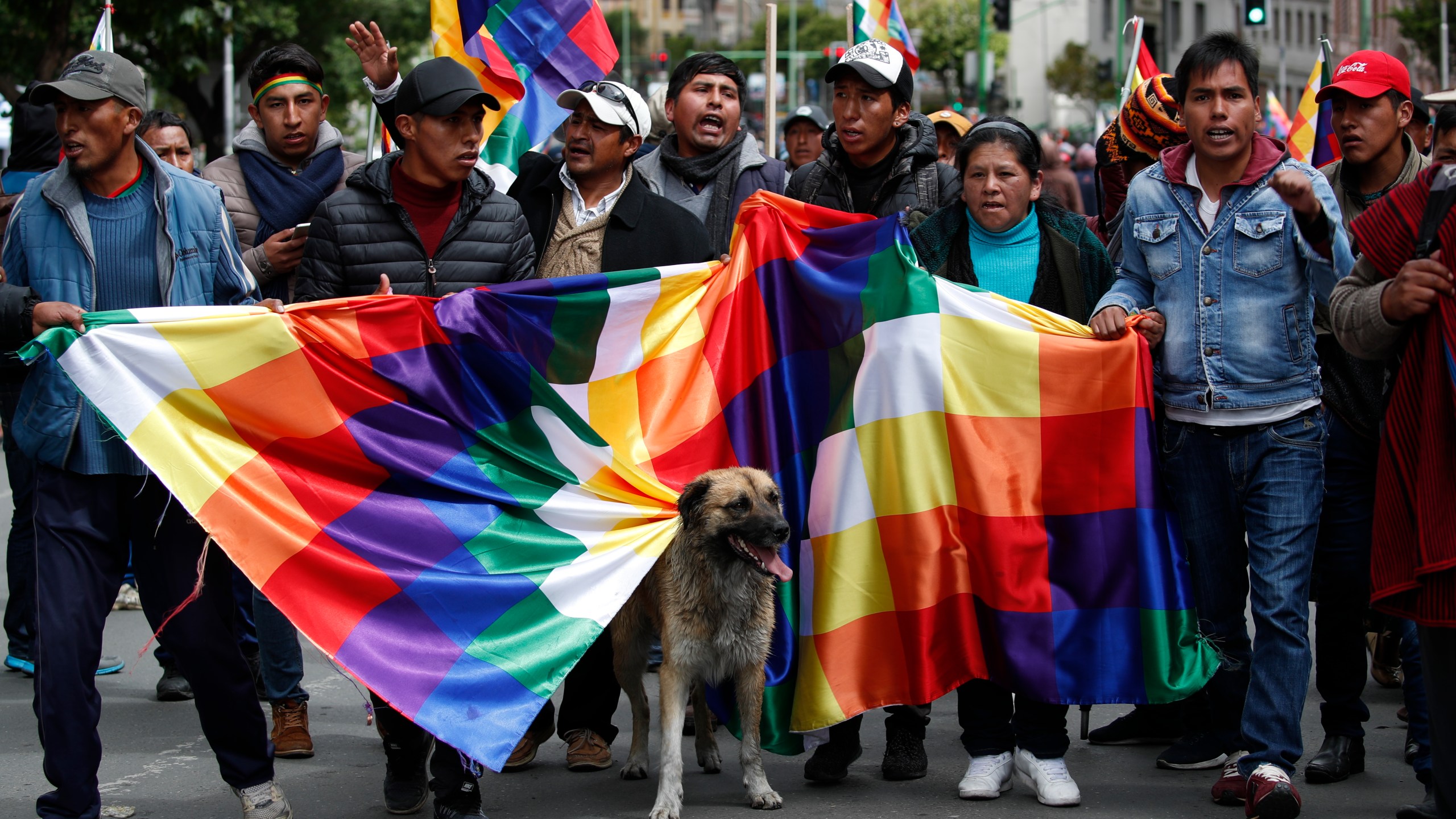 The world birthed in the near extinction of one-fifth of humanity still exists, in the social relations bequeathed to the Americas by conquistadors and enslavers.

The events in Bolivia lay bare the central role that racial subjugation has always played in the “New World,” a hemisphere whose “discovery” by Europeans resulted — within the span of only 50 years — in the death by genocide and pandemic of fully a fifth of the Earth’s human population. The Conquistadors frenzied “primitive accumulation” of precious metals, mined by enslaved Natives who died quicker than they could be replenished, created a demand for the capture and importation of millions of Africans with immunities to both European and tropical disease. For centuries, until deep into the 1700s, the vast majority of the Western Hemisphere’s population was Indigenous and Black, with African slaves comprising the great bulk of newcomers to the New World. Thus was laid the material basis for the rise of Europe, the beginnings of capitalism and the global supremacy of whiteness.

“My crime is to be a union leader, to be indigenous…and anti-imperialist,” said Evo Morales, the three-time elected president of South America’s most indigenous nation as he entered exile in Mexico. Bolivia is roughly two-thirds native. Morales’ election victory, October 20 – his fourth since 2005 — was aborted in the ensuing weeks by rampaging gangs of thugs employed by oligarchs based in the whitest – and most fossil fuel-rich – regions of the country who terrorized, beat and kidnapped  government and Movement for Socialism party officials and their families and eventually laid siege to the capital in La Paz, with no resistance from the police and army. Unable to protect his comrades or kinfolk, Morales resigned, and was quickly replaced as president by the leader of the white-dominated minority legislative party. Morales’ party had won absolute majorities in both houses of the legislature, but was left leaderless and terror-struck by the coup. The white rump prevailed.

“Morales’ election victory was aborted by rampaging gangs of thugs employed by oligarchs based in the whitest – and most fossil fuel-rich – regions of the country.”

The United States did not immediately recognize the new government of Senator Jeanine Añez Chavez, but will doubtless soon do so, having schemed incessantly for regime change ever since Morales joined Venezuela’s Hugo Chavez (1998) and Brazil’s Lula da Silva (2003) to set in motion Latin America’s “pink tide.” When Argentina (Cristina Fernández de Kirchner), Nicaragua (Daniel Ortega) and Ecuador (Daniel Ortega) elected leftish presidents in 2007, US imperial power sank to its nadir in the hemisphere. But the CIA never sleeps, and neither do the white oligarchs who remained at the commanding heights of the economy and media in the “pink”-led nations of the hemisphere. One by one, the anti-imperialist presidents were removed, with U.S. assistance, in Brazil (2016), Ecuador (2017) and Argentina (2015), for a time leaving only Venezuela and Nicaragua in the anti-imperialist camp – along with, of course, Cuba, which has not had a U.S.-allied oligarchic class to contend with since the revolution of 1959.

Luckily for Morales, in 2018 Mexico elected leftish president Lopez Obrador, who quickly facilitated asylum for Morales – as Mexico had done for countless political exiles throughout its history. Cristina Fernández de Kirchner was also returned to power in Argentina, this year . And Brazil’s “Lula” was released from prison earlier this month  pending appeal of his conviction on corruption charges, reinvigorating a demoralized left in the hemisphere’s biggest country.

“The CIA never sleeps, and neither do the white oligarchs.”

Of the U.S. presidential candidates, only Bernie Sanders expressed alarm over the forced ouster of the democratically elected president in Bolivia. “I am very concerned,” Sanders tweeted, “about what appears to be a coup in Bolivia, where the military, after weeks of political unrest, intervened to remove President Evo Morales. The U.S. must call for an end to violence and support Bolivia’s democratic institutions.”

Given that Sanders once called Venezuela’s Hugo Chavez a “dead dictator ” and slandered current president Nicholas Maduro as a “vicious tyrant ” as recently as last September’s presidential debate, that’s a great improvement. But a president Sanders might find himself seeking asylum in Mexico if he tried to radically reform U.S. policy in Latin America, which is intimately allied with the maintenance of white elite rule in the region in collaboration with multinational capital. In Latin America, U.S. influence means White Power.

When white secessionists began a drive to form their own nation in the natural gas fields of eastern Bolivia, they were befriended by the U.S. ambassador , who had previously been a key player in prying the province of Kosovo from Serbia.

“Sanders might find himself seeking asylum in Mexico if he tried to radically reform U.S. policy in Latin America.”

In Brazil, where the African-descended majority won affirmative action in public higher education and unprecedented recognition under presidents Lula da Silva and Dilma Rouusseff, the U.S. contributed the espionage underlying the prosecution and impeachment, respectively, of both Workers Party leaders. The grand scheme between the Obama and, later, Trump administrations and the white Brazilian elite culminated in the election of ultra-racist Jair Bolsonaro, who dismantled protections for Amerindians and their lands, threatened to reduce racial “quotas,” and declared that the police did not “kill enough” — in a nation where one out of every 12 encounters with police ends in death, and where hundreds of young Black men are killed by cops in a month in the megacities of Sao Paulo and Rio de Janiero. Under the “Trump” of Latin America, indigenous rights workers in Amazonia are now fair game for assassination by land grabbers. Brazilian politics is all about race, and is a perfect match with U.S. imperialism.

In Ecuador, indigenous protesters forced the neoliberal successor to leftish president Correa to withdraw an International Monetary Fund-imposed economic austerity program , after shutting down the capital city and forcing president Lenin Moreno to flee to the coast. That’s the second time in this century that Ecuadorian natives, who number about a quarter of the nation’s mostly mestizo population, have forced the government to retreat. Back in 2005, indigenous protests led to the ouster of president Lucio Gutiérrez when he tried to impose an IMF austerity regime. Indigenous leaders vow that they’ll return to the streets if Moreno reneges on the agreement.

“The grand scheme between Obama and, later, Trump and the white Brazilian elite culminated in the election of ultra-racist Jair Bolsonaro.”

Colombian politics also revolves around race – although neither the left nor the right will acknowledge it. Colombia has the highest number of displaced persons in the world : 7.7 million, according to the United Nations – even more than Syria, with 6.2 million. The majority of Colombia’s displaced people are Afro-descendants and indigenous, displaced by war and corporate land grabbers that operate in league with paramilitaries. The government refuses to enforce agreements recognizing the traditional land rights of both Blacks and indigenous people, and Afro-Colombians say FARC anti-government guerillas have never respected native and Black land rights, either. If the war in Colombia is a fight over land, then it is a war against Blacks and natives.

One glimpse at photos showing the racial composition of pro- and anti-government legislators in Venezuela, is enough to tell the tale. The violent opposition that has been trying to bring down the government for 20 years, with U.S. help, is overwhelmingly white, while the socialist government legislators look like the nation as a whole: largely Black, brown and native — like the late president Hugo Chavez, himself. Oligarch-owned newspapers brazenly published cartoons depicting Chavez as a monkey, and got away with it. U.S.-subsidized, mostly white rioters burned a young Black man alive in the streets of Caracas, assuming he was a Chavista. Racists in Venezuela don’t bite their tongues – nor do expatriate white Venezuelans in the U.S., a mob of whom, reinforced by racists from elsewhere in Latin America, surrounded the Venezuelan embassy in DC, last spring. American friends of Venezuela had occupied the building, with the blessing of the government in Caracas, to safeguard it against takeover by Donald Trump’s choice as pretend-president, Juan Guaido. The mob screamed racist and sexist threats  and taunts, day and night, for weeks, while the (largely Black) DC police stood by or abetted them. The U.S. American occupiers were eventually arrested, and face possible imprisonment .

There were Cubans, or the sons and daughters of exiled Cubans, in the mob, too, a reminder that Cuba is believed to have lost half her white population after the revolution – which is the best evidence that pre-revolutionary Cuba was a profoundly racist society.

The rest of Latin America has not undergone anything so sweeping – including Mexico, whose 1910-1920 revolution failed to achieve transformative results. The world birthed in the near extinction of one-fifth of humanity still exists, in the social relations bequeathed to the Americas by conquistadors and enslavers – and which U.S. imperialism is determined to preserve and defend.

BAR executive editor Glen Ford can be contacted at Glen.Ford@BlackAgendaReport.com.