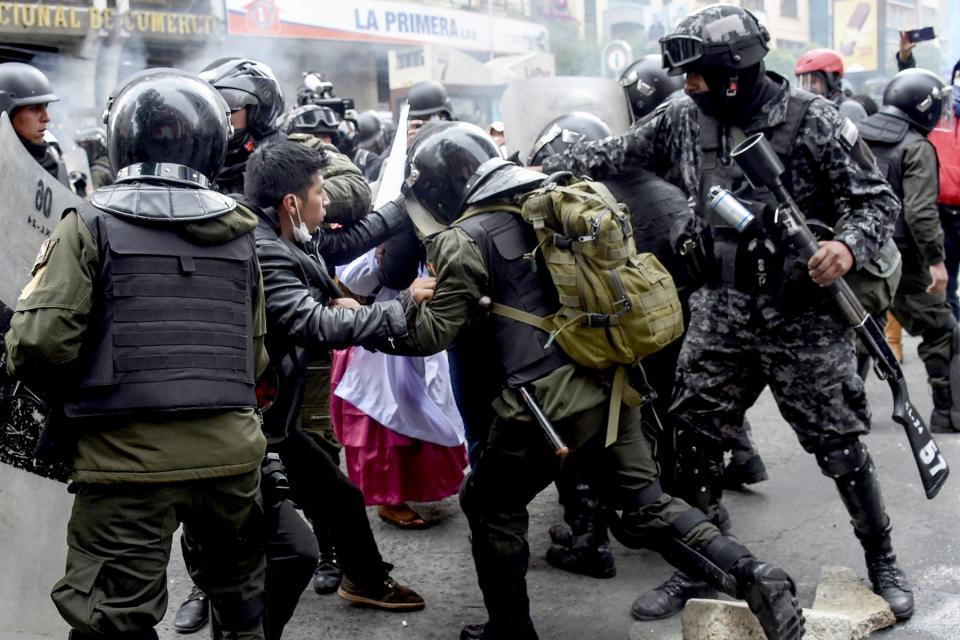 A coup d’état is never an isolated event. There is no specific moment that can be defined as the definitive generator of a democratic rupture. Any coup is a cumulative process in which the “framework” is fundamental to creating the necessary and sufficient conditions to guarantee its effectiveness. The erosion of legitimacy is done by multiple means that fertilize a field in which the dismissal actions are presented as democratic.

Due to the multidimensional character of the coup process, we could never affirm that there is only one person responsible. There are always many actors who participate in this task, from those who end up assuming the post-coup presidency to those who start a campaign of attrition with fake news.

In Bolivia, the coup d’état against democracy, with the objective of deposing Evo Morales as president, had many participants, each one in his respective role; some were collaborators while others were accomplices; some were more passive and others more active; some had been planning from the beginning and others joined as events unfolded.

Here is a brief but precise account of all those responsible for the coup d’état in Bolivia:

1. The Fascism of the Civic Committees

Santa Cruz, in particular. This political movement, as violent as it is racist, is not new, but goes back to the beginning of Evo Morales’ administration, because they never accepted that an indigenous and peasant representative should be the one with the popular mandate to govern the country. They tried many times, with many different representatives and, this time, it was Luis Fernando Camacho’s turn, who did not stand for election, who has no vote, but decided that violence and terror were the weapons to achieve the objective: to overthrow Evo and to put an end to the rule of law and constitutional order in the country.

2. The opposition party that did stand in the elections

Fundamentally, Carlos Mesa, Evo Morales’ main opponent, defeated in the last elections, was key in this whole coup process, ignoring results in advance and declaring fraud long before the elections took place. On the same day of the elections, he announced that there was a second round without the counting of votes being completed. After the elections, he constantly maintained a silent, complicit stance in the face of the violence unleashed by the civic committees, rearranging himself to the new political axis of the coup without demanding that it be stopped.

3. The current General Secretariat of the Organization of American States (OAS)

Always present whenever there is an undemocratic destabilization process. This time he did it directly, participating in the electoral process. First, it was with the preliminary report of the electoral mission, which without any basis, announced that it was “recommendable a second round”. Second, with a preliminary audit report full of weaknesses, biased and partial, without rigour, and mostly focused on criticizing the provisional (non-binding) data transmission system. When analyzing the official minutes, the actual ones, he only managed to demonstrate irregularities in 78 minutes out of a total of 34,555, which is 0.22%. In fact, the selected sample, in his own words written in the report, does not comply with statistical criteria but chose instead cases where the ruling party had obtained many votes. The report is plagued with adjectives and adverbs with a tone of judgement and discretion (“unusual behaviour”, “presumably”) demonstrating its incompetence in terms of rigour and impartiality.

4. The Government of the United States

Another must: as always, behind every coup, reappears hastily recognizing the new self-proclaimed president. However, this time, different authorities of the State Department -for example, Kimberly Breier- had already declared that the Bolivian electoral process was replete with irregularities, even using the term “potential fraud”; moreover, they stated more than once that it was necessary to examine the unknown results of the electoral meeting.

This is the second time they’ have been involved. In 2008 they mutinied and ignored President Evo, which provoked citizen insecurity and political and social destabilization. They did not prosper then, but now they have renewed their resistance at a time of great chaos and a state of terror provoked by the fascist movement in the streets. They were a key actor in the last phase of the coup d’état.

Surely this is the most difficult actor to decipher in this coup. Until the last moment, they did not make a statement about the grave situation. First of all, when everything was reaching its limit, they issued a brief statement with a very ambiguous last paragraph. Then, in a moment of greatest tension, they remained silent until, in the end, they asked for the resignation of President Evo. It is highly probable that there was division inside, and still is. The Armed Forces had several hours of confusion, without taking advantage of the existing institutional vacuum of power, and at no time did they assume control of the country’s reins. However, this does not absolve them of responsibility because they were coupled to the coup tsunami. We will see what happens from this point on because the game is not yet finished in terms of their role over the coming days and weeks. So far, the self-proclaimed president has replaced the commander of the Armed Forces, which means that she does not trust the former or the latter’s ascendancy over other middle managers.

They are never absent in each coup. They are keys to building the frame of reference before, during and after. One of the main perpetrators of this task in Bolivia is Página Siete. One example is enough to demonstrate how they generated the maximum level of anxiety: from the night of the elections until 48 hours later, they maintained on their website as the main lead the result of a private pollster, Viaciencia, which gave only 4 points in favour of Evo to install the idea of fraud despite the fact that the preliminary and definitive count had already been officially published. This medium was always the maximum exponent of the fraud scenario, before and after, defending the lack of knowledge of the results from the beginning and quickly emerging to endorse the undemocratic transition. In addition, there are other actors involved. We cannot ignore the role of “journalist” Carlos Valverde, who in the run-up to the 2016 referendum was responsible for the dirty campaign based on the “Zapata case”, aimed at eroding the image of Evo Morales.

The country’s big businessmen became very wealthy in the long cycle of economic prosperity. That is why this time it is not so clear that this coup d’état has its roots in its position against the Bolivian economic model. The central explanatory axis of this coup definitely resides in the racism of a Bolivian class that does not accept the indigenous, which is the essence of a Plurinational State. However, the country’s large economic groups are not oblivious to this quota of contempt for everything that has to do with the indigenous. That is undoubtedly why many of the country’s businessmen have been hesitant to accept the indigenous leadership that guarantees a stable and highly profitable economic project for them, or to participate in this coup in favour of leaders who only know how to be violent in the streets.

There is no lack of puppets on duty who always want to have the picture showing them as president, even if they are self-proclaimed. This time this role, like that of Guaidó, is played by Jeanine Áñez, who obtained just under 50,000 votes to become a senator. In any event, what is certain is that, despite the fact that she promulgates herself and a few others repeat it, she will never be the president of the country.