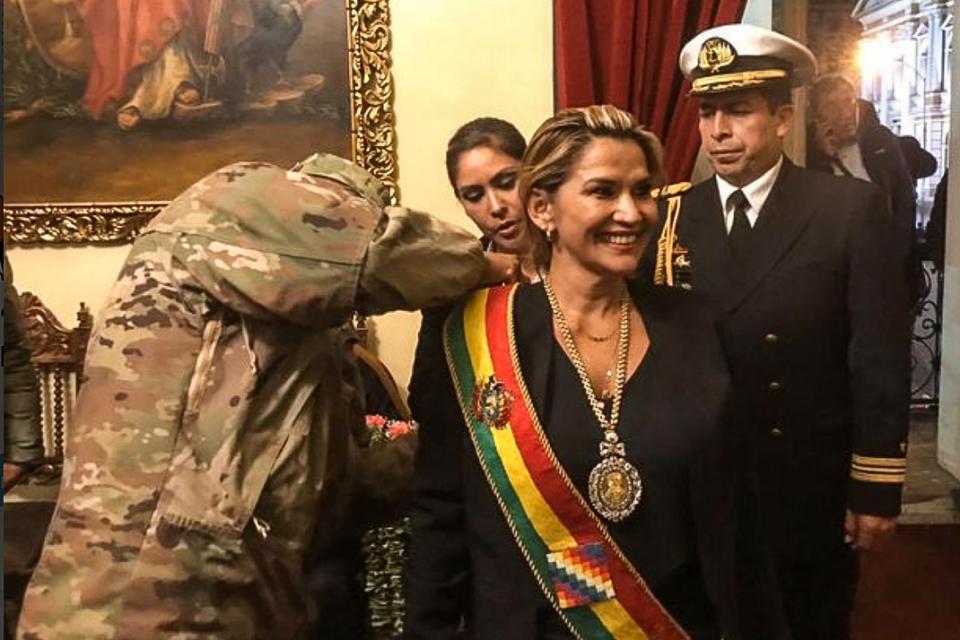 “It was possible,” said Jeanine Añez at the end of her speech after proclaiming herself president of Bolivia. As she spoke, you could hear them whispering to her what to say. Then she went to the presidential balcony and saluted wearing the tricolor sash. Thus ended one of the most important phases of the coup d’état in Bolivia: building an institutional fiction.

Añez proclaimed herself outside the Constitution and without a quorum. It was known that this was the only way to do it, since the majority in both chambers belong to the Movement Towards Socialism (MAS) and that the decision was made not to hold a session.

This step was essential in the strategy of a coup d’état that always had the objective of presenting itself as democratic. From the beginning, this presentation had the backing of the United States, as well as the Secretary of the Organization of American States, Luis Almagro, who on Tuesday accused Evo Morales of carrying out a coup d’état, accompanied by a protective media machine.

However, even with those endorsements, the absence of a formal presidency created a governmental vacuum – and the real authorities continued to function – that had to be resolved. The leading bloc then decided to accelerate the process by jumping over all legality to place the sash on the shoulders of their chosen person.

None of this would have been possible without the participation of those who hold the actual power. Morales, who arrived in Mexico in the morning with Álvaro García Linera, denounced that Añez proclaimed herself “surrounded by a group of accomplices and supported by the Armed Forces and Police that repress the people”.

It was not a political image: the police and the military repressed while Añez and the entire right wing celebrated in Bolivia. It happened in the center of La Paz, around Plaza Murillo, where all afternoon there was a mobilization led by those who came down from the city of El Alto, one of the places where the country’s biggest protests took place.

The mobilization of El Alto was one of the points of greatest conflict. On Monday the first moment of the uprising took place -its genesis had been on Saturday night- with thousands of men and women in their great majority belonging to the Aymara nation. That day ended with three dead. The images were of blood stains on the streets.

On Tuesday the arrival to La Paz was announced, and the residents of the city center locked themselves in their houses, while others went out to applaud the massive mobilization holding the Whipala flag.

The street action again showed the power of El Alto, at the same time that it evidenced a directional struggle, similar to the one that occurred in the days before the coup d’état was consummated and where now the different parts of the process of change are.

In El Alto, where daily town meetings are held, the demonstrations are not the only events in progress. The Coordinadora de las Seis Federaciones del Trópico called for mobilization on Thursday, and the Confederación Sindical Única de Campesinos de Bolivia decreed a plan of struggle to block the country’s highways and generate a siege on the city of La Paz that, 48 hours after the coup, has begun to present difficulties in the supply of gasoline and food due to the fact that many stores are closed.

There are many questions regarding the situation in Bolivia, advances made by those who lead the coup bloc, as well as the growth of resistance in a situation where information channels are few. It is difficult to know what is happening, both in the political epicenter of the debates, and in different areas of La Paz, El Alto, and in particular in the most remote, rural areas of the country.

There are numerous reports of deaths, repression, humiliation, persecution, within the context of a coup offensive which, before overthrowing Morales, unleashed a wave of violence with armed shock groups, which, once in power, with or without a government, has maintained its offensive in order to decapitate the process of change.

The most artful and nefarious coup in history has been consummated. A right-wing coup senator proclaims herself president of the senate and then interim president of Bolivia without a legislative quorum, surrounded by a group of accomplices and managed by the Armed Forces and Police who repress the people.

I denounce before the international community that the act of self-proclamation of a senator as president violates the CPE of Bolivia and internal norms of the Legislative Assembly. It is consumed on the blood of brothers killed by police and military forces used for the coup.

"I dream of a #Bolivia free of Indigenous satanic rites, the city is not for 'Indians,' they better go to the highlands or El Chaco," Senator @JeanineAnez said on her Twitter account about her country where more than 65% of the population is Indigenous. #GolpeDeEstadoBolivia pic.twitter.com/IB6109iGYR

This is what Bolivia's parliament looked like when Senator Jeanine Añez decided to swear herself in as head of state. No majority, no quorum, no vote on whether to accept @evoespueblo's resignation as required by law. No constitutional process. She just took power. That's a #Coup pic.twitter.com/cSJgOd9Jv5