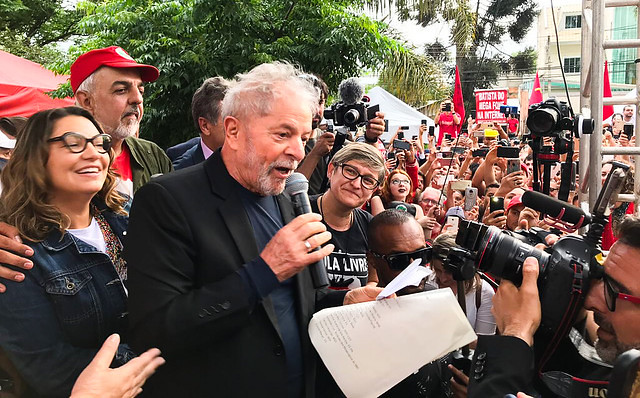 After being released from prison on Friday evening, Brazil’s ex-president Luiz Inácio Lula da Silva walked straight to the Free Lula Vigil, a camp set up outside the Federal Police building on the day he was incarcerated. The left-wing leader delivered a speech thanking the people who have supported him for the 580 days he was imprisoned.

“You have no idea how much it means for me to be here with you all. I have spoken to the Brazilian people my entire life, and I have never imagined that one day I would be here speaking to the men and women who shouted ‘good-morning, Lula,’ ‘good-evening, Lula’ for 580 days. It could be raining, or 100 degrees, or freezing. Every single day you were the living force of democracy that I needed to resist,” he said to the crowd of supporters moments after leaving prison.

Lula was released on Friday afternoon, following a Supreme Court ruling last night, when the top court declared that a person convicted in a case can only be imprisoned after all possibilities of appeal are exhausted.

The ex-president thanked the organizations that helped keep the Free Lula camp: the Landless Workers’ Movement (MST), the Workers’ Party (PT), the Unified Workers’ Central (CUT), the Movement of People Affected by Dams (MAB), the Union of Teachers of Paraná State (APP-Sindicato), and the leftist political organization Consulta Popular. He mentioned many names and hugged the activists who have been there for him while he was in jail.

Lula also thanked his media team and the support of politicians such as the ex-mayor of São Paulo Fernando Haddad and the chair of his Workers’ Party (PT), Gleisi Hoffmann, and thanked allied political parties such as the Socialism and Freedom Party (PSOL) and the Communist Party of Brazil (PCdoB).

The former president said he leaves prison feeling braver and ready to fight for the Brazilian people, adding that he will not allow president Jair Bolsonaro to “hand over the country” to foreign powers.

He said he feels outraged at the country’s political situation, which he has been following through the news and at “how much they have changed the country,” making employment conditions more vulnerable and freezing the minimum wage.

“The people are starving, they are struggling more, they are driving with Uber, riding bikes to deliver pizza, working in the most disrespectful conditions,” he lamented.

The Workers’ Party leader promised to “remain faithful” to the people’s struggle, and ended his speech underscoring that “Brazil’s doors are open,” implying that he plans to tour around the country soon.

“I leave here at age 74 and my heart only has room for love. Love will win in this country,” Lula said.

A demonstration is scheduled for this Saturday where Lula will deliver a speech outside the Metal Workers’ Union in São Bernardo do Campo.

The rally will be held by organizations that are members of the People’s Brazil and the People Without Fear fronts, which campaigned for the release of the ex-president.

In addition to the rally in São Bernardo do Campo, demonstrations are being held this Friday in Belém, northeast Brazil; Brasília, the country’s capital city; Porto Alegre, in the South; São Paulo, in the Southeast; and in the northeastern cities of Recife, Salvador, and Maranhão.