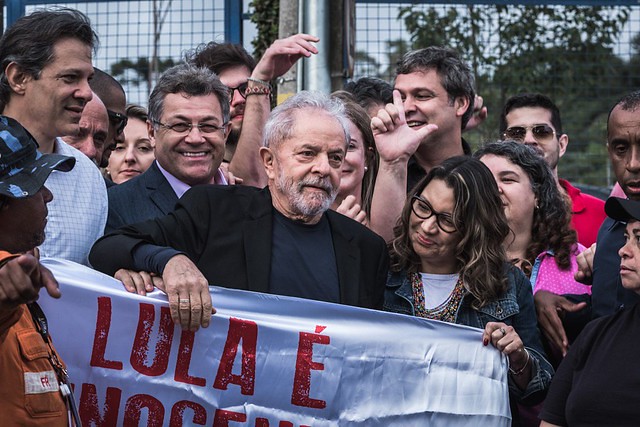 Released on Friday, November 8th, after 580 days in political imprisonment in Curitiba, former President Lula posted his first video on Instagram, sending a message to his supporters.

“I would like to thank you all for your solidarity from the bottom of my heart and tell you that I am free to help liberate Brazil from the insanity that is happening in our country,” he said. “We need to take care of education, employment, salaries, culture and happiness. Young people don’t live if they don’t feel pleasure and motivation for life, and this is what we have to offer you.”

Lula also joked with his supporters. “I would like to speak to my Instagram followers. I am 74 from the perspective of biology, but I have the energy of a 30 year old and the vitality of a 20 year old, OK? I’m just saying this so you can envy this young guy who is talking to you,” he said, laughing. 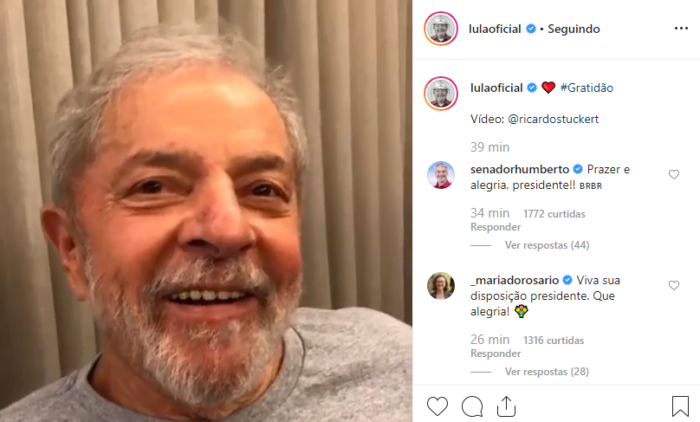 Today, the former President will go to his home town of São Bernardo do Campo, a working class, industrial city on the periphery of São Paulo, where he will participate in a demonstration organized by social movements in front of the historic ABC Metalworkers Union, which led the 1979 wildcat strike which accelerated the demise of the neofascist military dictatorship (1964-1985). There, he will make a speech to the Brazilian people, analyzing what has happened since right wing extremist Jair Bolsonaro took office in January, 2019. Brazil is currently facing three of its worst environmental crises in history, and 15 million people have dropped below the poverty line due to the US backed Lava Jato investigations paralization of the nation’s biggest companies, and the neoliberal austerity cuts that were implemented after the 2016 parliamentary/mediatic coup against Dilma Rousseff.

This article originally ran in Fórum, was translated from Portuguese and edited by Brian Mier, and can be seen in its original form here.

A four year chronicle of what was done to Lula, Dilma and the Workers Party – why, and by whom. #lawfare https://t.co/op15amiFUu pic.twitter.com/RTlJxxVl1o

Freed former President Lula has arrived at the Metalworkers Union Headquarters in São Bernardo do Campo where he will address supporters. Via @MidiaNINJA #LulaLivre pic.twitter.com/IuLX9AHwdB