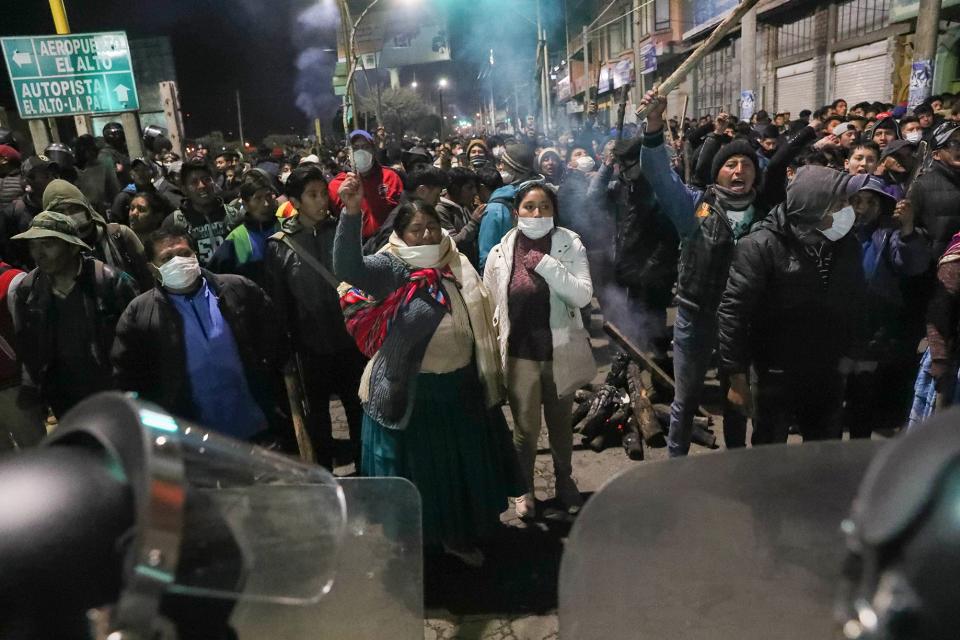 At night in La Paz they arrive in the surroundings of Plaza Murillo under dynamite roars, three gun shots, opponents with shields and sticks trying to reach the Casa Grande del Pueblo – the seat of government – separated by lines of police that defend the process of change and perform defense vigils.

It is part of an escalation that began with the denunciation of fraud regarding the October 20 elections that gave Evo Morales victory in the first round, and became more radical as the days went by. At first the speeches oscillated between asking for a second round and not recognizing the results, now they have converged to demand Morales’ resignation as the only possible solution.

Two right-wing leaders lead the opposition. The first, who occupies a secondary place in this phase, is Carlos Mesa, who was defeated by Morales on October 20. The second, who has increased in political strength and management capacity, is Luis Fernando Camacho, who leads the Civic Committee of Santa Cruz, the opposition’s strongest area.

The escalation had a geographical direction: it began in Santa Cruz, in the east of the country, extended towards the center, specifically to the department of Cochabamba where the greatest scenes of opposition violence were recorded, until arriving in La Paz, which is the main objective of what has been denounced by the government as an attempted coup d’état.

Camacho followed the same route from the east to the Andean city where he arrived on Wednesday night with the intention, he said, of delivering a letter of resignation to Evo Morales.

His arrival was preceded by two failed attempts at entry, due to the blockade carried out at the airport exit by those who support Evo, and recognize in the figure of the leader of Santa Cruz and Mesa the administration of a coup attempt and the return of the racist and exclusionary policy.

Before and after Camacho’s arrival, groups of clashes arrived from different parts of the country, particularly from Santa Cruz, as denounced by the Minister of Defense, Javier Zavaleta. They act in the nightly sieges of Plaza Murillo in the midst of demonstrators, especially young people, who mobilize for what they consider to have been electoral fraud carried out by the government and the Supreme Electoral Tribunal.

This dynamic of tension has steadily increased: it begins early in the day and ends in attempts at nocturnal assaults. During the day, the street blockades of the opposition are multiplied, along with confrontations with transporters who seek to pass, as the mobilizations runs through the center of the city, both of the opposition and of the movements that support Evo Morales, and defend what they regard as their electoral victory.

La Paz has thus become a scenario of instability and permanent escalating tension, with dangerous clashes, injuries and deaths, three since the destabilizing escalation began: two in Santa Cruz and one in Cochabamba. Morales denounced from the beginning what he described as an attempted coup d’état that the right would seek to create these conditions.

The opposition, for its part, has not taken responsibility for any of the violent acts, despite the fact that it has been revealed in images such as the kidnapping, beating, painting and cutting of the hair of the mayoress of Vinto, Patricia Arce, belonging to the MAS, the governing party, and the burning of the mayor’s office.

While this situation that pushes the country to the limit is developing, an audit takes place in which the Organization of American States participates, which will determine if there has been fraud on October 20, as denounced by the right without any evidence having been formally presented, or if, as the government maintains, there has not been any irregularity.

The outcome of the audit will be announced next week, a period of time in which many events may occur, particularly in the cities of El Alto and La Paz. Until now, the opposing columns have been prevented from meeting, which provokes opposition during the night and, if they do, would lead to widespread violence.

The Bolivian scenario is not only crossed by the attempted coup d’état underway, but also by the complex and profound fractures of society that are emerging these days. The resolution seems distant and uncertain: if the OAS recommends a second round – even in the absence of fraud – and the government accepts, would an opposition sector participate?

Those at the forefront of the escalation promise that they will achieve their objective, which is the dismissal of Evo Morales. They count on a mobilized base, shock groups, leadership, and national and international media support, but for the moment they do not have a determining element: a sector of the Armed Forces or the Bolivian National Police.