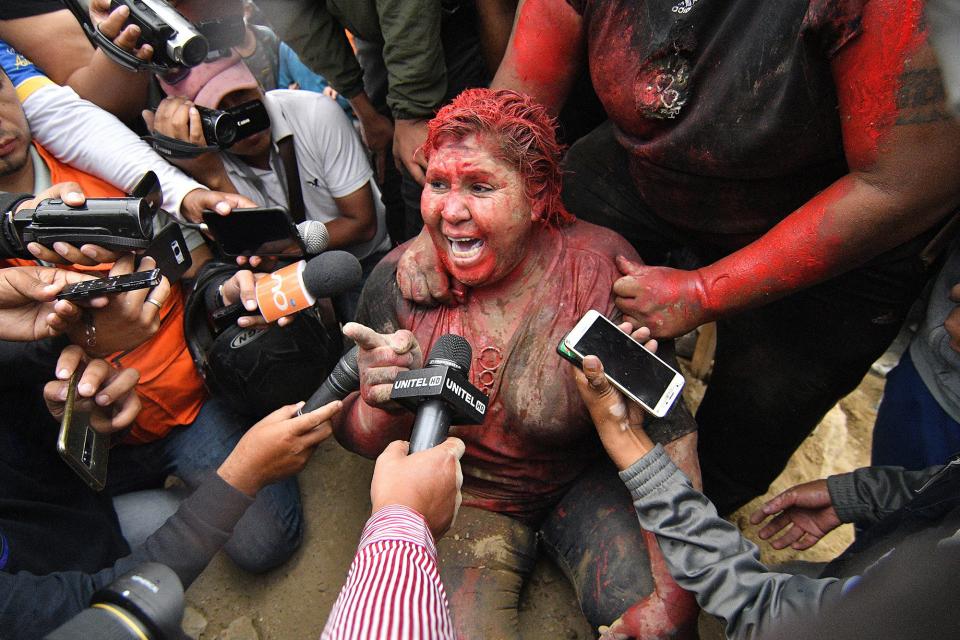 Bolivia was shaken again by confrontations and violent attacks, with epicenter in the city of Cochabamba but with events in other parts of the country this Wednesday and new night clashes in the city of La Paz. This takes place within the framework of the opposition protests against the result of the elections that led to the re-election of Evo Morales, while the audit of the vote count is being carried out by the Organization of American States and the country is in crisis due to a sustained civic strike. 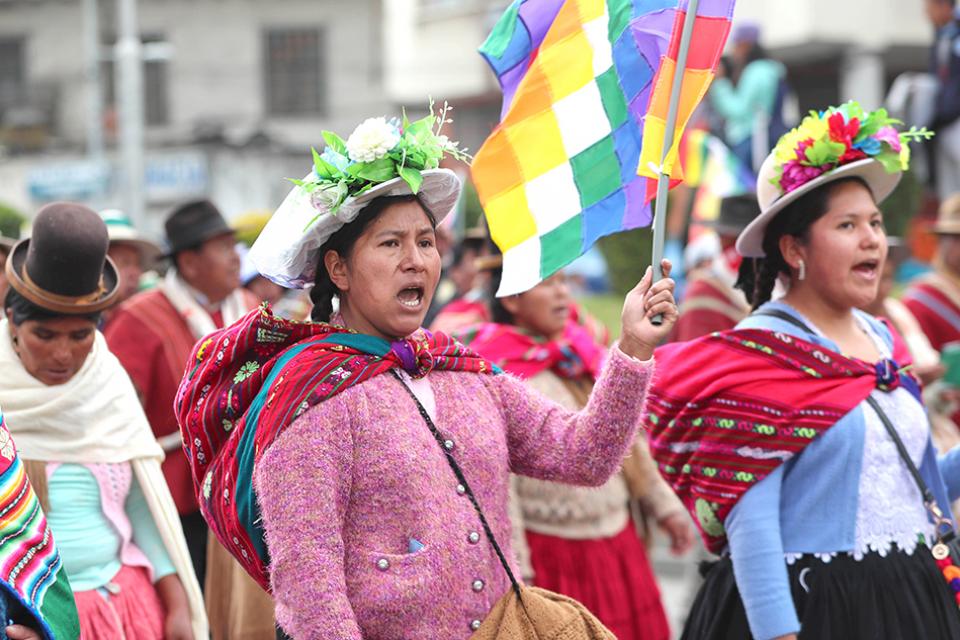 Towards noon yesterday immense columns of peasant women peacefully demonstrated against racism and for democracy in the center of the city of Cochabamba. Coca growers and militants of the Movement Toward Socialism joined the call for the “Bartolina Sisa” and, after noon, clashes began with groups of supporters linked to the Santa Cruz Civic Committee, who threw gas at the women and children. From that moment on, the fuse was lit and the violent episodes multiplied in the towns of Quillacollo and Vinto, a municipality in which the most serious events were recorded, including the burning of the mayor’s building.

The fatality was identified as Limbert Guzmán Vásquez, 20 years old. During the morning, a young man was reportedly rescued who had been seriously injured in clashes between blockade and anti-blockade. Guzmán was taken to the Viedma hospital, where he died in the night due to “severe head trauma, skull base fracture, brain death and respiratory cardiac arrest”. Aida, Limbert’s sister, told reporters that “the Party of (Carlos) Mesa and (Luis Fernando) Camacho paid him (to block the road) and, being a student, he was looking to earn some money.

“Resistencia Juvenil Cochala” is the name of the members of the shock groups that devastated Cochabamba riding motorcycles and armed with weapons of all kinds. They are accused of perpetrating the attacks against Patricia Arce, mayor of Vinto by MAS, who was kidnapped, detained and attacked by subjects who released her after forcing her to kneel, bathing her with red paint and cutting her hair, among other abuses. Félix Vegamonte, former peasant leader, former vice minister and current secretary of Coordination with the Social Movements of the Government of Cochabamba, suffered a similar fate.

“All my solidarity with our sister mayor Patricia Arce, kidnapped and cruelly harassed for expressing and defending her ideals and the principles of the poorest. We condemn the violent actions that cause mourning and pain in the Bolivian family,” President Morales wrote in his Twitter account and also expressed condolences and condemnation of the murder of Guzmán.

Violence on the rise

Javier Zavaleta, Minister of Defense, was emphatic in referring to the escalation of violence that plagues the country and called on civic leader Luis Fernando Camacho to withdraw his shock groups and to abandon incitement to mobilizations, seizures of institutions and closures of borders: “We are one step away from beginning to count the dead by the dozens if Mr. Camacho, does not make a call on Thursday for the pacification of people following him”.

In La Paz there were also new confrontations on Wednesday night, with 10 injured as a result of clashes between university students and miners in the vicinity of Murillo Square and the UMSA Law School. Tensions became extreme after 9 p.m. due to Camacho’s arrival at the El Alto airport. Zavaleta also reported that the civic groups of Cochabamba, Potosí and Santa Cruz transferred these shock groups to generate violence at the seat of government.

The atmosphere of violence and social tension is promoted by the opposition sectors which are mainly centred around the National Civic Committee. One of its main actors is the Santa Cruz leader Luis Fernando Camacho, whose strategy of delivering the letter of resignation to President Morales has kept pace with the escalation of violence.

In the midst of a major government security operation, Camacho arrived last night in La Paz and staged an entire media spectacle on social networks – including video – which was also exploited by people who waited for him for hours and were with him in the streets of El Alto and La Paz.

“I want to thank the Bolivian people for having accompanied me in this crusade, this generated the unity of all under a single cause,” he posted, adding to the cameras in front of him: “I thank the police for all their cooperation and especially the youth, those men and women who came to meet me at the airport. We do not seek confrontation, we do not want to divide Bolivia, we want one Bolivia without discrimination and without racism”.

While Carlos Mesa, the defeated candidate of Comunidad Ciudadana, offered his “solidarity and support” and built a political bridge: “It is very important to establish a line of unity of the Bolivian democratic opposition regardless of any particular circumstance, I believe that this is key in a moment of crisis as dramatic as the one Bolivia is experiencing”.

The Camacho saga continues today with its letter of resignation to the president while the convulsion continues and the strike is aggravated by the blockades of the international border crossings by heavy cargo carriers, which is also damaging the free transit of residents and tourists.

Meanwhile, the conclusions of the OAS audit, which ends on November 11, is pending. Amidst this play of Light and Shadows, Luis Almagro, head of the organization, said via Twitter that “the protests for the audit mission reaffirm my conviction that it must continue its work”. 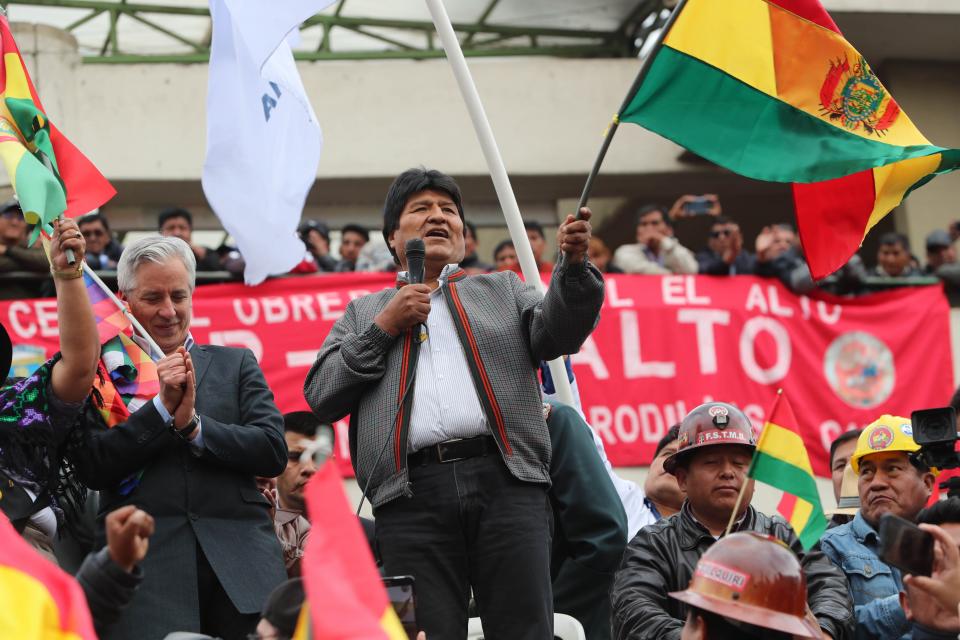