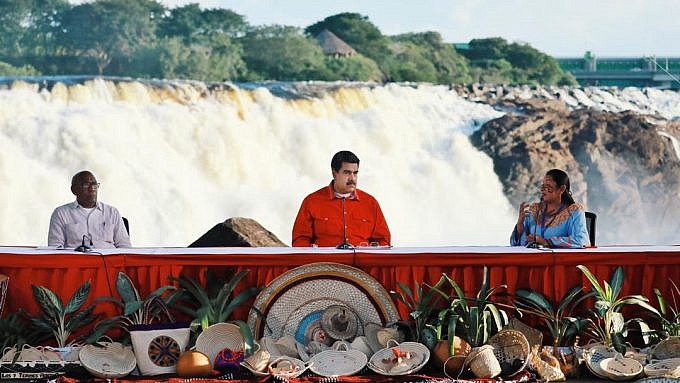 Venezuelan President Nicolás Maduro Moros called on all indigenous and popular movements in the world to raise their flags in support of Evo Morales, who faces a destabilizing plan after the presidential elections held on October 20 where he was elected with more half a million votes in his favor. “We are going to boost global solidarity and support for Evo Morales (…) who faces an oligarchic and imperialist coup d’etat,” Maduro said during the closing ceremony of the First International Congress of Native Peoples, held in the state’s La Llovizna National Park Bolivar.

The President said that the groups that are reluctant to accept Morales’ triumph intend to destabilize Bolivia using part of the violence formula that has been applied in Venezuela on various occasions by sectors of the right.

“Evo Morales for the fourth time has been elected by his people, and the oligarchies had already announced, two months before the elections, that they would not recognize the results,” he emphasized. He ratified his support and solidarity for the people of Bolivia and their legitimate government led by Evo Morales, with whom Venezuela has strong ties of brotherhood and cooperation. “We demand that the electoral results be respected,” he said.

After the presidential elections held on October 20 in the Plurinational State of Bolivia, the right-wing candidate, Carlos Mesa, ignored the results by unleashing a wave of violence that seeks to forcefully take away the legally constituted government.

Morales has denounced the attitude of the right in his country “not wanting to recognize the indigenous vote as in the past they never did”, while ratifying his will to defend social rights, peace and democracy in his country.

President Maduro urged indigenous peoples on Thursday to promote the changes that are needed for the construction of a new world, where the values of justice and equity are forged. He stressed that the First International Meeting of Indigenous Peoples – which closed on Thursday – allows that “together we build the vision of a new world, of a new humanity and that indigenous peoples be the driving soul, the original energy of the great changes that humanity needs to meet again with justice, with equality.”

He pointed out that this Congress, which is part of the agreements reached at the Sao Paulo Forum, held in Caracas last July, allows all the countries participating in the event to carry the truth of Venezuela and thus overthrow the media campaign promoted by the United States government and right-wing nations of the region.

In the same way, he said that these congresses strengthen the social alliances between Venezuela and the movements of the world.

During the event, Nicolás Estes was present, one of the members of the original towns of North Dakota (of the Sioux tribe), United States. He thanked Venezuela for the support it provided in 2007 during the government of Commander Hugo Chavez.

“The revolutionary government of Venezuela helped us when we needed it most, filling our heating tanks. This is one of the reasons why I came here to say thank you, thanks to the Venezuelan people,” said Estes.

The delegates of the First International Congress of Native Peoples decided that Venezuela will host the founding congress of a movement of native peoples to be held in August 2020, an organization that will aim to gather different indigenous communities around the world.

Martha Mesa, an indigenous spokeswoman for Honduras, explained that Venezuela will host this organization, and that the more than 400 indigenous and tribal representatives participating in this first congress will be part of the inaugural meeting next year.

She explained that this body will seek to establish alliances with global and continental organizations to ensure the social and political demands of the peoples, defining a progressive line against imperialism and neoliberalism.

“We propose to form an international organization of indigenous and progressive movements to fight, within the framework of our plurality and diversity, all the mechanisms of domination of imperialism and its neoliberal measures. It will be an organization articulated in a plan of anti-colonialist struggle,” said the spokesperson during the presentation of the conclusions on joint radio and television broadcasting.

Similarly, those gathered in this first meeting decided to reject the package and repression of the Ecuadorian government led by Lenin Moreno, and welcomed the repeal of decree 883 after the demand of indigenous movements.

In addition, they repudiated “the criminal conduct” of the Sebastián Piñera administration and celebrated the mobilizations of the Chilean people against the neoliberal system that prevails in that South American nation, and supported the struggle of the Mapuche people.

“We celebrate the volcanic awakening of the people of Chile. We sympathize with the undeniable will of the struggle of the Mapuche people, in the face of the constant abuses to which they are subjected by their government,” said Mesa.

She added recognition for the Venezuelan government and repudiation of attempts to destabilize it by the United States government, as well as condemnation of the fires in the Amazon that caused the displacement of indigenous communities, she said.

“You are not alone, we are with you, because Venezuela is each and every one of the indigenous peoples of the world,” she said.

This meeting included 18 countries and delegations from more than 60 nations belonging to 25 indigenous peoples of the world plus 42 of the national territory with 400 Venezuelan representatives, who debated for three days various topics related to the struggle of indigenous peoples.