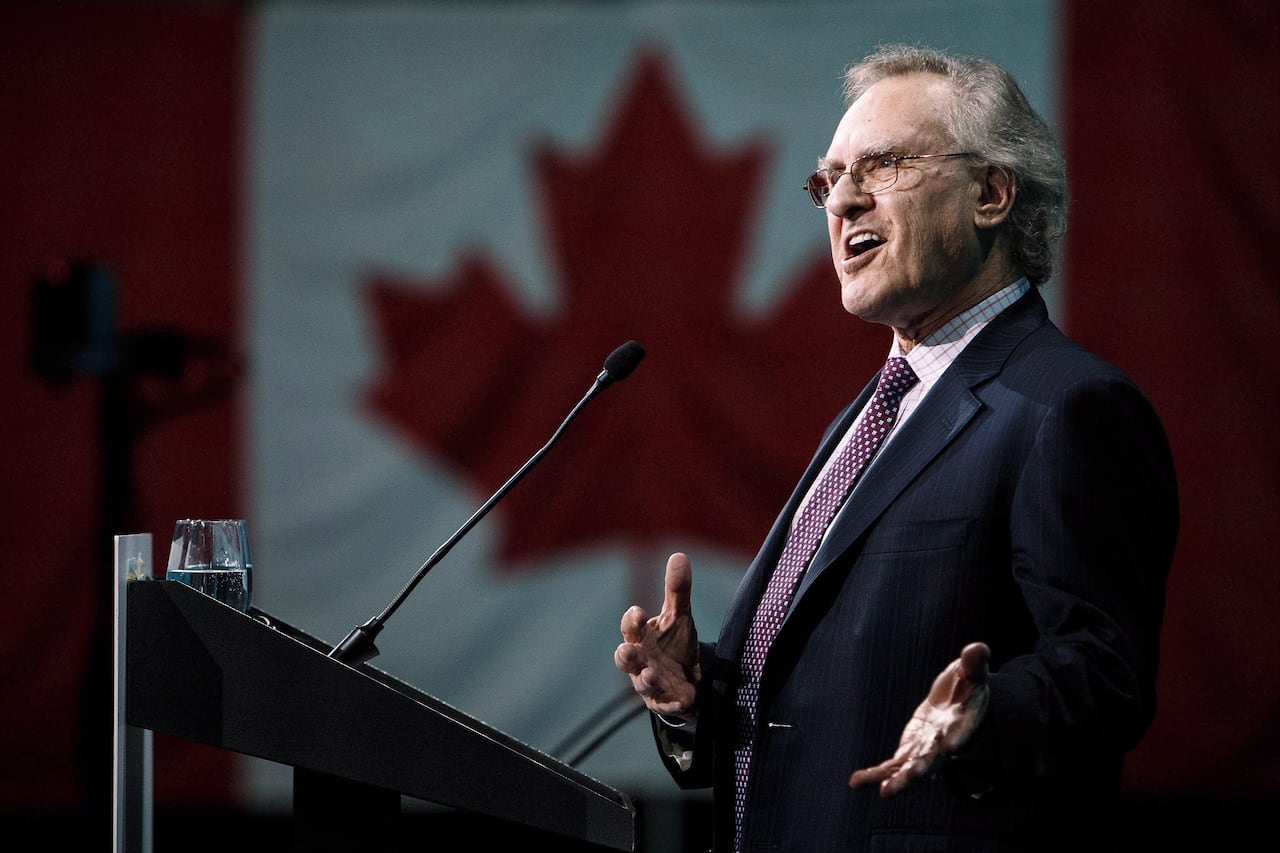 If the New Democratic Party wants to be part of the solution and not a barrier to creating a better foreign policy it needs to start telling the truth.

Just before the election Svend Robinson for Burnaby North-Seymour published an endorsement from Lewis. The Facebook page for the left-wing NDP candidate noted, “Thanks to the legendary Stephen Lewis for this stellar endorsement!”

The mainstream left’s deification of Lewis reflects its alignment with Canadian imperialism. Ontario NDP leader from 1970 to 1978, Lewis was stridently anti-Palestinian. He demanded the federal government cancel a major UN conference scheduled for Toronto in 1975 because the Palestine Liberation Organization was granted observer status at the UN the previous year and their representatives might attend. In a 1977 speech to pro-Israel fundraiser United Jewish Appeal, which the Canadian Jewish News titled “Lewis praises [Conservative premier Bill] Davis for Stand on Israel”, Lewis denounced the UN’s “wantonly anti-social attitude to Israel.”

At the NDP’s 2018 convention Lewis’ sister, Janet Solberg, was maybe the loudest anti-Palestinian. Former president of the Ontario NDP and federal council member, Solberg was a long time backroom organizer for her brother and works at the Stephen Lewis Foundation.

Lewis’ wife Michele Landsberg was a staunch anti-Palestinian herself. In one of her latter Toronto Star columns the prominent feminist wrote, “to keep their people primed for endless war, Palestinians have inculcated racist hatred of Jews and of Israel in school texts, official newspaper articles and leaders’ pronouncements, in language so hideous it would have made Goebbels grin.”

I can’t find any evidence of Lewis distancing himself from his or family’s previous anti-Palestinian positions.

Lewis backed the 2011 NATO bombing of Libya. “To forestall debate on Libya, Gaza and NATO in 2011,” wrote Barry Weisleder about the NDP convention that year, “Lewis gave a rhapsodic introduction to the foreign policy selections, during which he bestowed his blessing on the murderous NATO bombing of Libya, purportedly as an antidote to alleged mass rapes attributed to forces of the Ghadaffi regime.” Amnesty and Human Rights Watch couldn’t find evidence of the alleged mass rape. Amnesty senior crisis response adviser Donatella Rovera, who was in Libya for three months after the start of the uprising, said: “We have not found any evidence or a single victim of rape or a doctor who knew about somebody being raped.” Vehemently opposed by the African Union, the war on Libya destabilizing that country and surrounding states. Tens of thousands were killed and Libya remains at war.

Lewis promoted the Responsibility to Protect (R2P) doctrine used to justify the 2011 NATO war in Libya and the 2004 overthrow of Haiti’s elected government. R2P is a Canadian promoted high-minded cover for Western imperialism.

Denial of Canada’s crimes in Africa

During the 2015 tour for my Canada in Africa: 300 Years of Aid and Exploitation I came across an iPolitics interview with Lewis on Prime Minister Stephen Harper’s policies in Africa. In it the former UN Special Envoy for HIV-AIDS in Africa said Stephen Harper’s government was not doing enough to fight the disease in Africa and decried Canada’s withdrawal from the continent. “It’s heartbreaking. You know what Canada could do. You know the difference we could make,” said Canada’s former Permanent Representative to the UN. But criticizing Harper’s failure to ‘do more’ in Africa was an affront to the victims of Canadian policy on the continent, because asking the Conservative leader for more was like the hen house rooster calling for more foxes. The Conservatives waged war on Libya and worked aggressively to increase the $30 billion Canadian mining sector’s profits at the expense of local African communities. Most troubling of all, Harper’s promotion of heavy carbon emitting tar sands and sabotage of international climate change negotiations was tantamount to a death sentence to ever-growing numbers of Africans.

Yet, on Africa no Canadian is more revered than Lewis. Though he’s widely viewed as a champion of the continent, the standing of the former Deputy Executive Director of the United Nations Children’s Fund (UNICEF) reflects the dearth of critical discussion about Canada’s role in Africa. In fact, rather than advancing African liberation, the long-time member of Canadian and UN policy-making circles represents the critical end of an establishment debate oscillating between neo-conservatives who advocate aggressive, nakedly self-interested policies and those who promote the “Responsibility to Protect”, “do more” worldview.

As I describe in Left, Right: Marching to the Beat of Imperial Canada I failed to find any serious criticism Lewis directed at Canadian foreign policies except to deplore Ottawa’s insufficient aid. Lewis has long bemoaned the lack of “support” for Africa all the while ignoring Ottawa and corporate Canada’s contribution to the continent’s impoverishment.

But the staunch advocate of “aid” appears remarkably uninterested in the often self-interested and harmful character of “aid”. He ignores how Ottawa initially began dispersing aid to African countries as a way to dissuade newly independent countries from following wholly independent paths or falling under the influence of the Communist bloc. A big part of Canada’s early assistance went to train militaries, including the Ghanaian military that overthrew (with Ottawa’s backing) pan-Africanist independence leader Kwame Nkrumah in 1966. Since the 1980s hundreds of millions of dollars in Canadian aid money has gone to support pro-corporate structural adjustment policies and other initiatives benefiting Canada’s rapacious mining industry in Africa.

Lewis all but overlooks his own country’s role in subjugating the continent.I failed to find any comment on the many thousands of Canadian soldiers and missionaries who helped conquer the continent or undermine African cultural ways at the turn of the 19th century. Nor does Lewis seem to have mentioned official Ottawa’s multifaceted support for European colonial rule or Canada’s role in overthrowing progressive post-independence leaders Patrice Lumumba, Milton Obote and Kwame Nkrumah.

On the other hand, Lewis has repeatedly celebrated Canadian foreign policy. When Nelson Mandela died in 2013 Lewis engaged in aggressive mythmaking, boasting about “the intensity of our opposition to apartheid” and “the extraordinary role that Canada had played in fighting apartheid.” But, as I detail here, this is total hogwash.

Lewis’ 2005 book Race Against Time is peppered with praise for Canadian diplomats, lauding Canada’s role in fighting for gender equality at the UN, dubbing businessman-turned diplomat Maurice Strong “the ultimate ubiquitous internationalist” and exalting in “our own Lester Pearson … who negotiated with other Western governments the benchmark of 0.7% of GNP as the legitimate level of foreign aid for all industrial countries.” Despite Lewis citing Pearson’s name glowingly, the longtime diplomat, external minister and prime minister’s foreign-policy record dripped with blood, as I detail in Lester Pearson’s Peacekeeping: the Truth May Hurt.

Contrasting the ‘left’ reputation of Lewis in international affairs with his contentious history inside the domestic left reveals a great deal about the state of foreign policy discussion.

As head of the Ontario NDP, Lewis purged the Waffle (or Movement for an Independent Socialist Canada) from the provincial party in 1972. At the time many leftists criticized his role in expelling the Waffle from the party and some activists remain critical of Lewis for doing so to this day. In an article titled “On the 40th anniversary of the expulsion of the Waffle” Michael Laxer eviscerates Lewis for driving activists from the NDP. While his move to expel the Waffle continues to be debated, criticism of Lewis largely dried up as he shifted towards the international scene (as Brian Mulroney’s ambassador to the UN, UNICEF Deputy Executive Director and UN Special Envoy for HIV-AIDS in Africa). Yet, I believe most progressives, if they understood the implication of his positions on Africa, would find more common ground with Lewis’ domestic positions. On domestic policy Lewis has at times forthrightly criticized Canada’s power structures, broadly supports labour against capital and would largely reject charity as a model of social service delivery/poverty alleviation.

But, there’s at least some culture of holding politicians/public commentators accountable for their concessions to the dominant order on domestic issues so Lewis has faced some criticism. On Africa the situation is quite different. When it comes to the “dark continent” any prominent person’s charitable endeavor, call for increased “aid” or criticism of a geopolitical competitor is sufficient to win accolades. In an article titled “Africa in the Canadian media: The Globe and Mail’s coverage of Africa from 2003 to 2012” Tokunbo Ojo provides an informative assessment of the paper’s coverage of Lewis. Ojo writes, “built into this moralizing media gaze is the ‘white man’s burden’ imagery, and the voice of Canadian Stephen Lewis, a campaigner against HIV/AIDS, effectively symbolised this imagery in the coverage. Metaphorically, Lewis was framed as the iconic [19th century liberal missionary] ‘David Livingstone’ in campaigns against HIV/AIDS in Africa.”

It is long past time the NDP confront its pro-imperialist, missionaries-as-good-guys past and present.