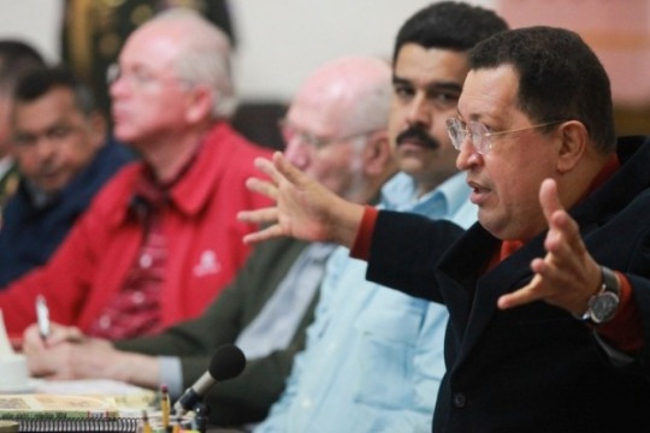 The event was organised by the Encuentro de Lucha Popular platform, which looks to bring together grassroots movements throughout the country, and drew a crowd of around 200 people to the Cinemateca Nacional auditorium.

“Strike at the Helm” was Chávez’s political testament, his final speech in which he lays out his vision of the Venezuelan road to socialism.

“Where is the commune?”, Chávez demanded of his ministers as they presented reports on the government’s accomplishments. Although Chavismo was fresh off a resounding victory in the 2012 presidential elections, Chávez was aware that not everyone around him was clear about the path forward.

The three-hour long broadcast (cadena) was full of important debates that remain relevant to this day, from Chávez’s warning about small “islands” of socialism being swallowed by the capitalist sea to his ridiculing of those who believe socialism is a matter of renaming everything with a “socialist” prefix.

Everyone has their own takeaway from “Strike at the Helm,” as the different speeches at this event showed. Nevertheless, the common denominator for popular movements was an ardent repetition of Chávez’s now famous slogan, “Commune or Nothing!”.

The first speaker was Ángel Prado, spokesperson from El Maizal Commune. He explained how “Strike at the Helm” was celebrated by communards, who felt Chávez was on their side in scolding his ministers, not to mention the clear message about the role communes should play.

“We took it as a “green light” to no longer depend on the ministry [of communes]. Popular power was going to build its commune as long as it embraced the task,” he said.

Throughout its ten-year history, and especially in the recent crisis, El Maizal Commune has taken strides in crafting its own policies on the ground. This has meant a constant dispute with large landowners as well as state entities in order to recover idle land and means of production.

Prado insisted that taking over means of production has to be a priority for popular power. The commune is currently moving forward with a small scale industrialisation endeavour to process corn, so as to avoid selling it to the state at a very low price.

He wrapped up by stressing that “Strike at the Helm” remains more relevant than ever. “We are the ones responsible for changing reality, for building popular power. We must radicalise to move forward,” he concluded.

The second speaker was Reinaldo Iturriza, Venezuelan writer and intellectual who served as minister of communes and later of culture between 2013 and 2015. In recent years he has dedicated himself to analysing the internal dynamics in the Bolivarian camp, particularly through a series of texts called “An Affective Picture of Chavismo.”

In his talk, Iturriza highlighted the historical importance of “Strike at the Helm” as a document where the need to overcome the capitalist model of exploitation is explicitly laid out. He underscored the speech’s relevance at a time when the Bolivarian project’s horizon is blurred.

“It is essential to recognise diversity and overcome differences, while also establishing a fluid relationship with ‘hardcore’ Chavismo, the grassroots,” Iturriza explained, stressingthe need to rebuild the “democratic hegemony” of the project.

Iturriza also called for maintaining an interaction with the Chavismo that is organised in popular movements and communes, as well as reach out to the “disaffiliated” Chavismo. In his opinion, this is an ever growing group that does not necessarily identify with Chavismo nowadays but still believes in participatory and protagonist democracy and retains Chávez as a referent.

Iturriza closed by emphasising the importance of communicational work, which he said must be done with intellectual and political integrity, if the goal is to convince the popular majority. As a final reflection, he told the audience that “we must make revolution in order to win elections, not win elections in order to make revolution.” 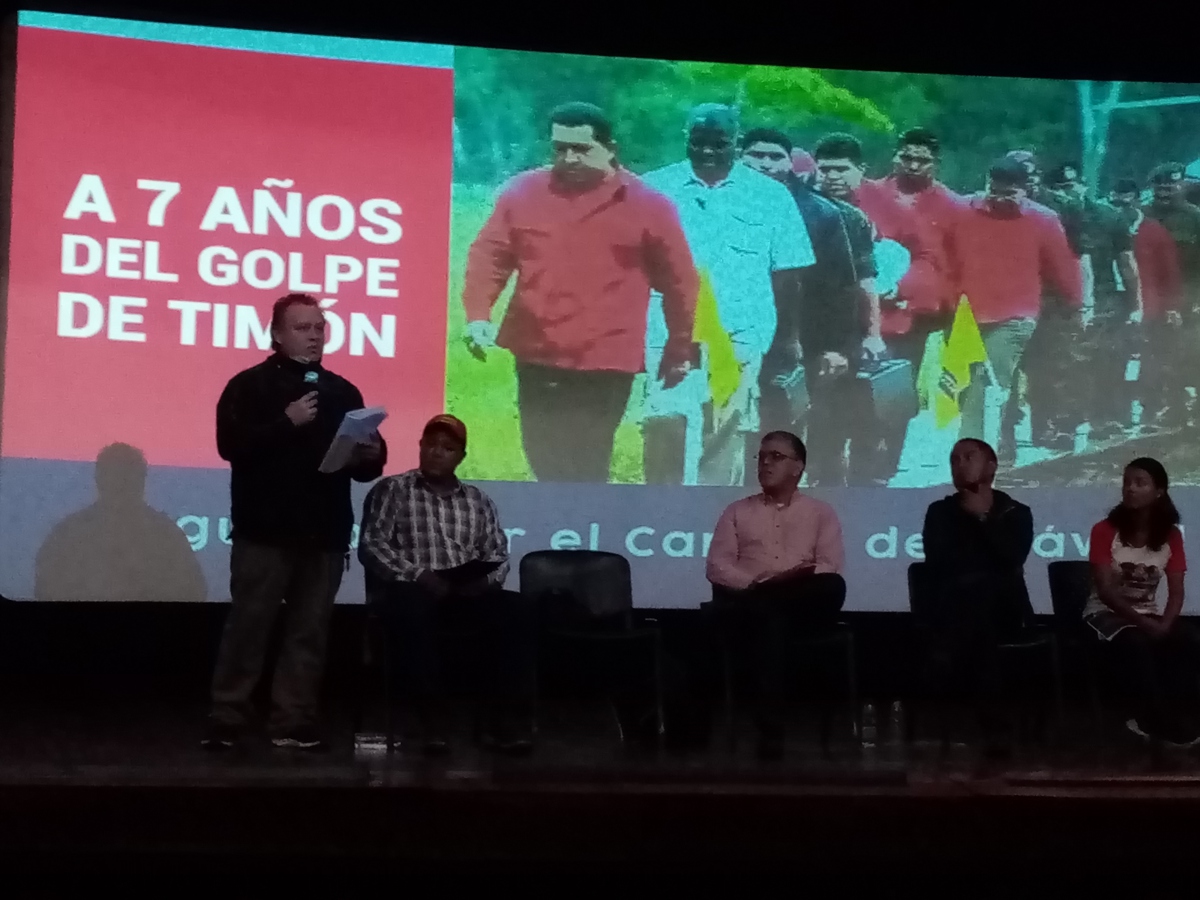 In his talk, Reinaldo Iturriza discussed the re-construction of the “democratic hegemony” of Chavismo. (Ricardo Vaz)

The speaker who followed was Luis Salas, former vice president for economy and editor a the 15 y Último left economics website.

He stressed that an important aspect of Chávez’s final speech is the idea of a “point of no return,” namely how to render the achievements of the Bolivarian Revolution “irreversible.”

Salas focused his presentation on the drastic fall of Venezuelan GDP since 2014, the collapse of the country’s oil industry and the crisis of the electric grid. He pointed out that in the present context, a “strike at the helm” would mean the recovery of the oil industry, since it is the only one that can generate income in the short term in order to boost the development of other sectors.

He likewise emphasised that overcoming the electricity crisis is a prerequisite for any future economic recovery, since the grid currently has no capacity to sustain the (re)activation of major industries, for example. However, he argued that first and foremost the government must set its economic priorities in order.

The last talk was left to Elías Jaua, former minister and vice president, and central figure of the Encuentro de Lucha Popular platform.

In his opinion, a “strike at the helm” today means retaking the spaces of revolutionary construction and rebuilding the legitimacy of the Bolivarian process.

“The model worked. We need to regain trust in what we did,” he insisted. Jaua also referenced“Strike at the Helm” in arguing for strengthening the role of the state in the economy, contrasting it to the growing tendency towards privatization witnessed over the past several years.

Continuing along those lines, he affirmed that restoring the technical, managerial and productive capabilities of the strategic state companies needs to be a priority. Jaua likewise stressed that the context of imperialist aggression demands unity among all patriots, but without diluting the Bolivarian project.

“Let us be free of this morass, of fear. Let us dare to fight for the revolution,” he said in closing.

“Strike at the Helm” does not contain a recipe that the government can simply put into practice. Not only that, it was produced in a very different context, with an economy worlds apart from the current one.

Getting out of this dramatic crisis requires a profound reorientation of state policy. But it will also entail making concessions that need to be debated, not imposed without transparency and presented as another step in the construction of socialism.

Nevertheless, “Strike at the Helm” does present a clear view of the socialist horizon and a vision of how to reach it. This is essential in the struggle for hegemony within the Chavista camp. It is not that Chávez’s word is the gospel, but rather that the communal project, even amidst a devastating crisis, still stands as the most promising initiative around which the hegemony of Chavismo can berebuilt. Commune or nothing!