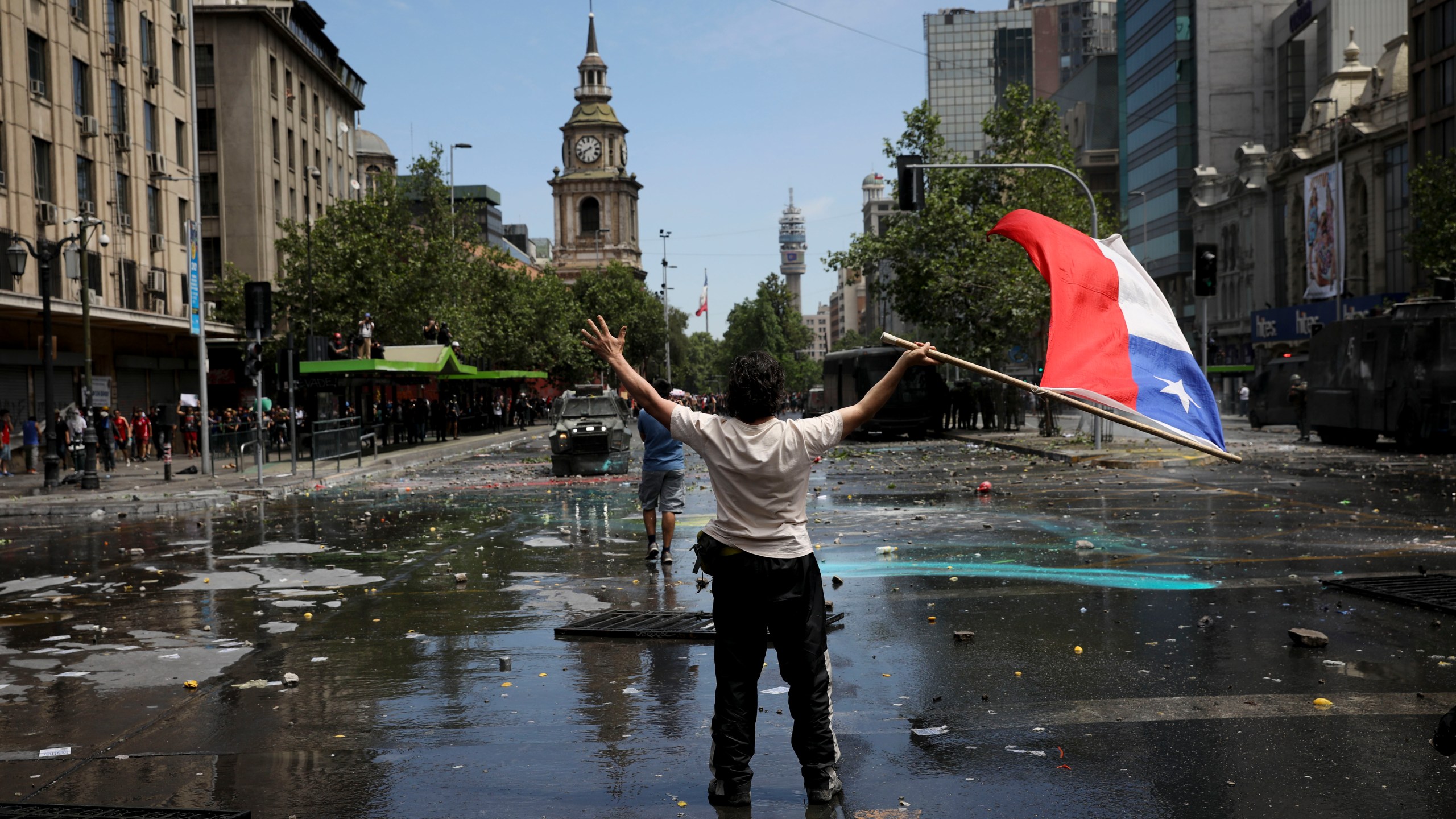 Since the moment that the Chilean Government announced they were increasing public transport fares—more specifically, the subway system—, students went out to the streets to reject the measure. Days later, as the protests were growing, it was backed by workers, professionals, pensioners, and every poor sector of Chilean society, expressing their own claims what was being concealed for years: Chile is not “Latin America’s paradise” but a country with the highest rate of inequality, where neoliberalism sprouted and established itself as the economic means to condemn the population to plundering and impoverishment.

“Chile is a real haven in a convulsed Latin America,” said Chilean President Sebastian Piñera while students were beginning to express their contempt to the fare hike through chants like, “Evading, not paying is another means of struggle.” Their demands were written with crayons on paperboards and walls, as they organized their first “mass fare-dodgings.” They arrived in subway stations in groups, jumped over turnstiles and urged other passengers to do the same, just say no to the fares by not paying.

The Government answered by commanding the Army to carry out a wave of brutal repression. Pictures immediately took the people’s collective memory back to the horror lived under the Augusto Pinochet dictatorship. Today, 46 years later, the same streets in Santiago are shaking again, where the constitutional President Salvador Allende was ousted.

Early in the morning of October 19, President Sebastian Piñera decreed a “state of emergency” in Santiago capital city and other cities such as Valparaiso, La Serena and Conception. The measure is being enforced in 10 out of 16 regions of the country. General Javier Iturriaga del Campo was appointed by the President as National Defense Chief, as he announced that the laws on state security will be implemented against demonstrators.

The National Human Rights Institute has reported that as of this moment there are at least 17 deaths, scores more injured, mass arrests, women being sexually assaulted in prisons, and minors being arrested and taken away. The Attorney General admitted that 5,400 people have been arrested by October 22. Other sources account for 42 deaths, rapes, tortures, and disappeared people.

“This is not about 30 pesos, it’s about 30 years of abuses,” is the claim the population in which 70 percent is paid less than the minimum wage and their standard of living is even more precarious. Though the Government retracted the fare hike the repression remain brutal, but people are not stepping back. Protests are spreading from Santiago to the north and throughout the country.

Chilean analyst Florencia Lagos noted that the “state of emergency” is a response against demonstrations that are the result of justified social unrest. According to her, this is not surprising given that the Constitution, valid since the civic-military dictatorship, enables the President to implement the measure through an organic law.

Massacring the population is legal in Chile if the President in turn considers it necessary. A massacre, this is what soldiers in uniform and also civilians are doing, shooting on their own people; a massacre by fiercely beating and detaining citizens unjustifiably, without distinguishing if they are underage; “Chile is governed by the civilians of the military dictatorship, those who were never prosecuted because they were protected by Pinochet’s Constitution,” Mrs. Lagos said.

Pablo Sepulveda Allende had already commented days ago about the reasons why the Chilean population are saying “We are no longer afraid,” even though they have to face tanks and bullets amidst a curfew.

The looting of Chile’s huge mineral resources; wealth concentrated among a few; impoverishment among the population; exploitation of workers; precariousness of education and health, pensions, gas, services, while other services have been privatized; brutal repression against the indigenous Mapuche population; impunity for murderers who plunged the Chilean people into mourning; are the reasons that explain the social outbreak that is no longer confined to the transport fares but a general demand for democracy after a long night of dictatorship.

It took only a week to go from the investment “haven” of capitalism to declaring war under a state of emergency with armored vehicles in the streets.

Piñera’s words to the United Nations recently seem pathetic and laughable now: “The Chilean democracy condemns Venezuela’s dictatorship.” Paradoxically, Army tanks have never been seen in the streets of the Bolivarian Venezuela shooting against its population.

What does the Lima Group, Luis Almagro, Michelle Bachelet herself, and the Latin AmericanRight’s ideologist Mario Vargas Llosa have to say now? What do they say with regards to the casualties, the army repressing civilians, those injured, and more than five thousand people arrested? And what does the Trump Administration, who is so quick to condemn and sanction those countries that insist on their sovereignty, have to say now.

What do they say about that Chilean people who awoke from a long nightmare to demand their rights?

In the country where neoliberalism was born, its children and grandchildren are making a sharp stab. As Chilean professor Pedro Santandar said, “Perhaps the origin itself is the place for the end of the most depraved model of those invented by capitalism.”