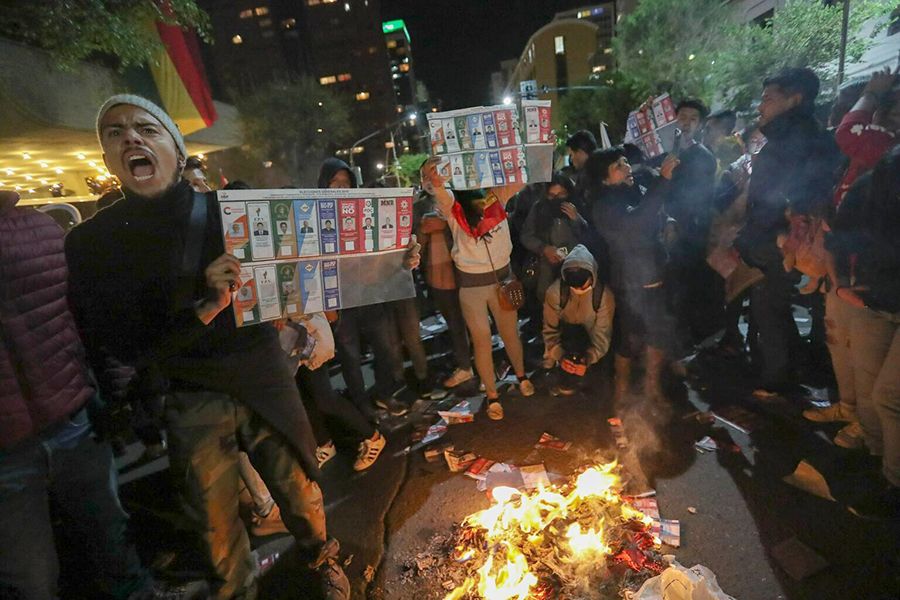 The seizure and burning of offices of the Electoral Tribunal of Potosi and violent actions against arbitrators in Tarija, Chuquisaca, Oruro and La Paz and the demolition of a statue of former Venezuelan president Hugo Chavez in the Amazon of Riberalta, confirm allegations of U.S. coup plans against Bolivia.

The Central Obrera Boliviana (COB) and the Coordinadora Nacional por el Cambio (Conalcam) resolved to declare a state of emergency and peaceful national mobilization in defense of democracy, in the face of violent, racist and anti-democratic actions with which extreme right-wing groups seek to convulse the country.

According to what had been exposed, if the president won the elections on Sunday, October 20, the plan was to declare electoral fraud, destabilize the country and attempt to impose a parallel administration.

First they tried to set the country on fire with an indefinite general strike before election day, covert operations, a campaign of discredit and disinformation, among other forms of sabotage to create violence and delegitimize the electoral process in the country.

And last Sunday during the election, the hegemonic communications and misinformation media sought to generate in the collective imagination a possible fraud that would prevent a second round of elections where the opposition supposedly would broadly win.

These elections were the most complex and difficult for the indigenous leader and his Process of Change, due to a combination of internal and external causes, which converted them into an obstacle to overcome both from the Bolivian perspective and the relationship of forces in Latin America, particularly in the South American region.

Externally, there is Washington’s counteroffensive to disrupt the progressive and leftist governments of the region, when the people rise up against the neoliberal measures of the governments of Argentina, Peru, Ecuador and Chile.

State Department officials accredited in Bolivia such as Mariane Scott and Rolf Olson held meetings with senior diplomatic officials from Brazil, Argentina, Paraguay, Colombia, Spain, Ecuador, the United Kingdom and Chile to collaborate in organizing destabilization actions against the government and to lead the denunciations of election fraud, which would be more credible and genuine than if the US or the Organization of American States (OAS) did it directly.

Shortly before the elections, President Evo Morales said he had evidence that certain groups of civic and ex-military leaders were preparing a coup d’état: “It is the paramilitarism of those times of the dictatorships,” he said in his closing campaign in Potosí, amidst clashes between his followers and citizens carrying out a civic strike in rejection of how the lithium industrialization process is progressing and in demand for more mining royalties.

The United States, through different media and actors, activated its fourth plan to destabilize the government, block the political-electoral continuity project of the Movement towards Socialism and interrupt the process of change, which exposes the profound weakness of the internal opposition, which is looking to obtain from outside the country what it has not been able to obtain from within.

One of the goals of the plan designed by the US is to fragment the State’s armed institutions, mainly the National Police and the Armed Forces.

The third phase of the plan (the first two did not produce the expected results) indicates that after Evo’s inauguration and considering that they have been able to achieve social destabilization, a parallel civil-military government would be self-proclaimed, promoted by a fraction of the Armed Forces, led by Waldo Albarracin, who will call for new elections within 90 days without the participation of the Movement Towards Socialism (MAS).

The Washington government had been secretly preparing politician and presidential candidate Oscar Ortiz for that stage, who caused a great fiasco by winning just over 4% of the vote. And that is the reason why he has abstained from defending the main opposition candidate, Carlos Mesa, from accusations of corruption.

To underpin the campaigns, Trump’s government allocated $100,000 to the consulting firm CLS Estrategies, based in Washington, which has the largest database of Bolivians inside and outside the country. It is difficult for CLS to impose on the collective imagination the figure of a candidate who has not made his mark on the citizenry.

Intelligence reports also indicate that the CIA station in La Paz took control of whatsapp networks in the country, connecting them with political analysis groups, filtering false information and conducting debates according to their interests.

On October 15, Evo Morales announced that a vehicle from the U.S. Embassy was offering the residents of Los Yungas works in that area in exchange for not supporting the Movement Toward Socialism (MAS) in the elections and revealed that he submitted this complaint directly to the U.S. Chargé d’Affaires, Bruce Williamson, who declared himself surprised and promised not to intervene in electoral matters.

On Facebook a video was viralized in which the supposed deacon, Jorge Sonnante, affirms that the president of the State, Evo Morales, keeps 420 million euros in a Vatican Bank account. “To show me that I have more than 300 million euros in the Vatican, and that they have proof,” insisted President Evo Morale, for whom this information is part of the dirty war.

All the oligarchic and imperial destabilization actions have been deployed since 2005 against the process of change, led by the indigenous leader Evo Morales. The first attempt to overthrow Morales occurred at the beginning of the 2006-2009 period; the second between December 2015 and February 2016; and the third in 2018.

Today the main operators of the subversive plan are Bolivian politicians Gonzalo Sánchez de Lozada, Manfred Reyes Villa, Mario Cossio and Carlos Sánchez Berzain, all coincidentally living in the United States. Those who coordinate the actions in Bolivia are the leaders of the National Military Coordinating Committee, made up of reserve commanders such as General Rumberto Siles and colonels Julio Maldonado, Oscar Pacello and Carlos Calderón.

Although much of the funding was to be found in Bolivian territory, with the support of embassies accredited in Bolivia and the Evangelical Church, and US government fronts so as not to be directly involved in these interventionist aims, the plan was not fully implemented before the elections.

According to the intelligence report, the strategy in the social networks and the fake news campaign is led by Raúl Reyes Rivero, coordinator of the actions of the Democratic Platform and the Civic Committees with a view to overthrowing the president. Among his main contacts are Jhanisse Vaca Daza, Omar Duran and Frank Sousek Medrano, employee of the Inter-American Development Fund.

Former President Jorge Quiroga was in charge of seeking support and statements from regional and international organizations such as the Organization of American States, the Inter-American Commission on Human Rights, the European Union, in order to delegitimize the electoral victory of Evo Morales, declare it unconstitutional and attempt an international intervention in Bolivia.

The second phase consisted of establishing a state of social crisis, with demonstrations, including violent demonstrations, strikes, roadblocks, to be carried out between June and the date of the elections.

Juan Flores, president of the Cochabamba Civic Committee, along with retired colonel Oscar Pacello are the political operators of Carlos Sánchez Berzain and Manfred ReyesVilla in Bolivia, in charge of achieving a point of convergence between the reserve’s Civic, military and police committees to unleash violence and social upheaval in Bolivia, which would force the suspension of lessons or destabilize the country by declaring electoral fraud.

The U.S. government’s assessments agreed that President Evo Morales would win the election, yet the U.S. embassy has been creating objective and subjective conditions for the declaration of electoral fraud.

The State Department also hired U.S.-Israeli citizen Eli Birnbaum, who in 1998 was an advisor to Israeli Prime Minister Benjamin Netanyahu, then his chief of staff, after which he teamed up with Arthur Finkelstein, a political campaigner for Republican politicians.

He is the man chosen to command the actions of destabilization in Bolivia and to support the figure of Oscar Ortiz. The idea is to convulse the country politically and socially after the elections. In 2017 he commanded Marta Lucía Ramírez’s campaign to the vice-presidency of Colombia, which was based on fake news to influence voters.

Birnbaum has the task of working with the Cruceñista Youth Union networks to discredit the president, and with Jhanisse Vaca Daza, executive of the NGO “Standing Rivers” (funded by the Freedom Fellowship of the Humans Rights Foundation in the United States), which uses its platform to permanently disseminate adulterated and false information in order to generate reaction against state policies.

Undoubtedly, there are some issues that have not been properly resolved by the government and it is in this context that over these next five years the great challenge is that of industrialization.

Bolivia is one of the countries with the greatest lithium wealth in the world and that wealth must be used to propel the people towards greater development. And to appropriate Bolivia’s wealth, the United States plans to end the plurinational state and the popular government headed by Evo Morales.

Venezuelan sociologist, Co-director of the Observatory on Communication and Democracy and of the Latin American Center for Strategic Analysis (CLAE, http://www.estrategia.la).

VISIT BEHIND BACK DOORS>>