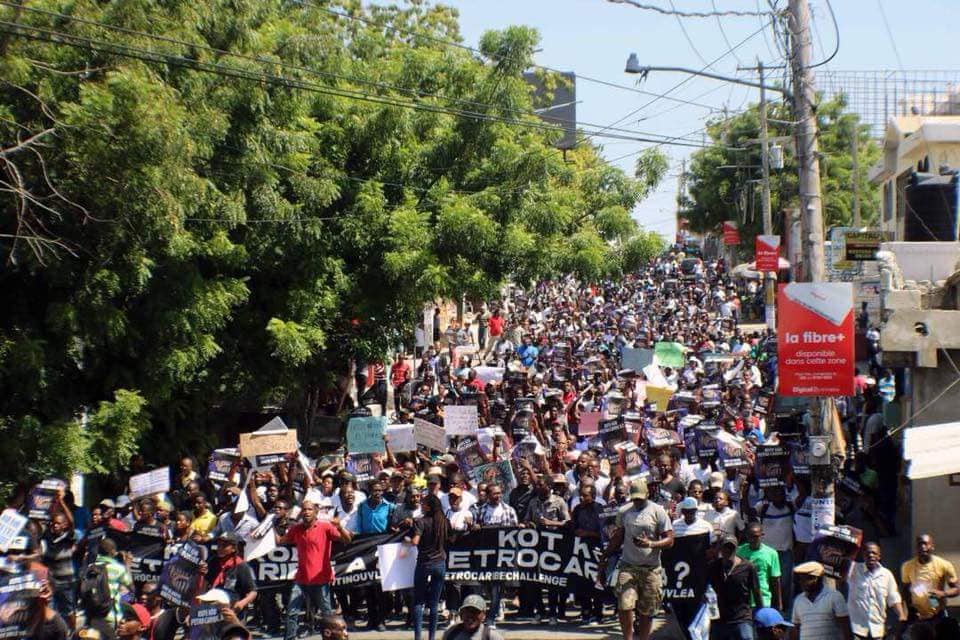 Nearly every day over the last 15 months has seen thousands of Haitian demonstrators taking to the streets of the capital Port-au-Prince and other major cities across the country to demand the resignation of U.S.-backed president Jovenel Moïse.

Today, the landscape of Port-au-Prince is apocalyptic, reflecting the fierce class war that has been waged since last summer, if not for decades. The huge crowds are heroically taking to the streets to defend Haitian sovereignty from the murderous military forces and corrupt, corporate interests that dominate the Haitian government. With each passing day and week, the movement only continues to grow in size and strength.

Despite severe violence on behalf of the government (and up until recently, the international occupation force acting under the authority of the United Nations Security Council), the movement to oust President Moïse and the foreign meddlers that have dominated the Haitian political scene for decades is not weakening. Day by day, the struggle for a sovereign Haiti, free from imperialist intervention, continues.

Centuries of struggle for freedom

Political turmoil and unrest has characterized the day-to-day lives of Haitians practically since becoming the first free Black republic in 1804, when the nation’s powerful struggle against its French colonists put Western powers – most notably, the United States – on the immediate prowl to contain Haiti’s revolutionary potential. Today, the Haitian demonstrators’ message reflects long-standing demands for an end to foreign military occupation and meddling.

This history includes U.S.-backed coups that have installed corrupt dictators in Haiti, such as the notorious François “Papa Doc” Duvalier (1957-1971) and his successor Jean-Claude “Baby Doc” Duvalier (1971-1986). Their repressive regimes embraced economic austerity and utilized military violence to restrain anti-government protest. After a near three decade-long struggle to overthrow the Duvalier dictatorship, the first free, democratic and peaceful polls elected anti-imperialist liberation theologian Jean-Bertrand Aristide in 1990. Yet less than a year later, the United States waged its first coup against Aristide, and its second in 2004 following Aristide’s re-election in 2000. Only a few days ago, on October 15, did the people of Haiti see the end of a 15-year period of military control by the United Nations Security Council, deployed in force to repress Haitian resistance following the 2004 coup.

Of course, however, U.S.-specific interventionism in Haitian politics anything but subsided after the 2004 coup. Since then, the United States has played a substantial role in the molding of the political landscape in Haiti to force it to fit within the framework of the neoliberal capitalist project.

In 2005 under President Hugo Chavez, Venezuela developed the PetroCaribe alliance in order to extend solidarity to nations across the Caribbean and Latin America using the country’s massive oil wealth. The revolutionary leaders of Venezuela made it clear that this was not an act of charity, but meant “to repay the historic debt that Venezuela owes the Haitian people.” This was in reference to the fact that the triumphant Haitian Revolution of 1804 sparked a wave of anti-colonial struggle around the world, most notably across Latin America. Support in the forms of arms and soldiers from the newly independent republic helped to catalyze the emancipation of several nations across South America led by the revolutionary Simón Bolivar, including Venezuela.

Under the PetroCaribe alliance, Haiti only needed pay 60 percent upfront for oil, with the remainder going into what’s known as the PetroCaribe fund, a capital account to be invested in social welfare projects including roads, housing, hospitals and schools. Against staggering statistics, including a poverty rate of 58.5 percent, a minimum wage varying from 215 to 800 gourdes ($2.54 to $9.45) per day, a maternal mortality rate of 529 deaths per 100,000 live births, 0.7 hospital beds per 1,000 people, and 7.4 million out of more than 10 million people living without electricity, this program was expected to be monumental for the people of Haiti.

Unfortunately, all Haitians saw from the fund were unfinished bridges, partial roads, and a complete deficit of new housing (especially crucial in light of the horrific 2010 earthquake), new schools or hospitals, social programs, and subsidies on basic material needs and commodities.

For years, U.S.-installed Haitian president Michel Martelly and his administration had embezzled, misspent and “misplaced” the near $4.3 billion in the PetroCaribe fund. It is speculated that Martelly used some of the money to assist his protegé, current President Jovenel Moïse, in his ascent to power in Haiti in 2017.

Conditions in Haiti worsened, and U.S. sanctions on Venezuela inhibited the country from continuing this extremely beneficial program. The PetroCaribe deal between the two nations was effectively ended in October 2017. Following the closing of the petroleum deal, Washington’s enforcer, the IMF, demanded that Haitian President Moïse to raise gas prices. His effort to do so on July 6, 2018, resulted in a three day popular explosion that has culminated in the current uprising.

The mass movement today continues to question “Kot kòb PetroCaribe a?” – “Where’s the PetroCaribe money?” in attempts to point to the corruption upon which the Moïse administration, as well as those of his U.S. backed predecessors including Michel Martelly, have been founded.

Already, Haitians were enraged with corruption, famished and resource-dry from the deepening inflation and unemployment, and fed up with foreign military and political humiliation and violence. But the betrayal by Moïse on the PetroCaribe program was the last straw. It had become increasingly clear to Haitians that President Moïse’s interests lay not with the people of Haiti, but simply in facilitating the exploitation of Haiti by Western powers.