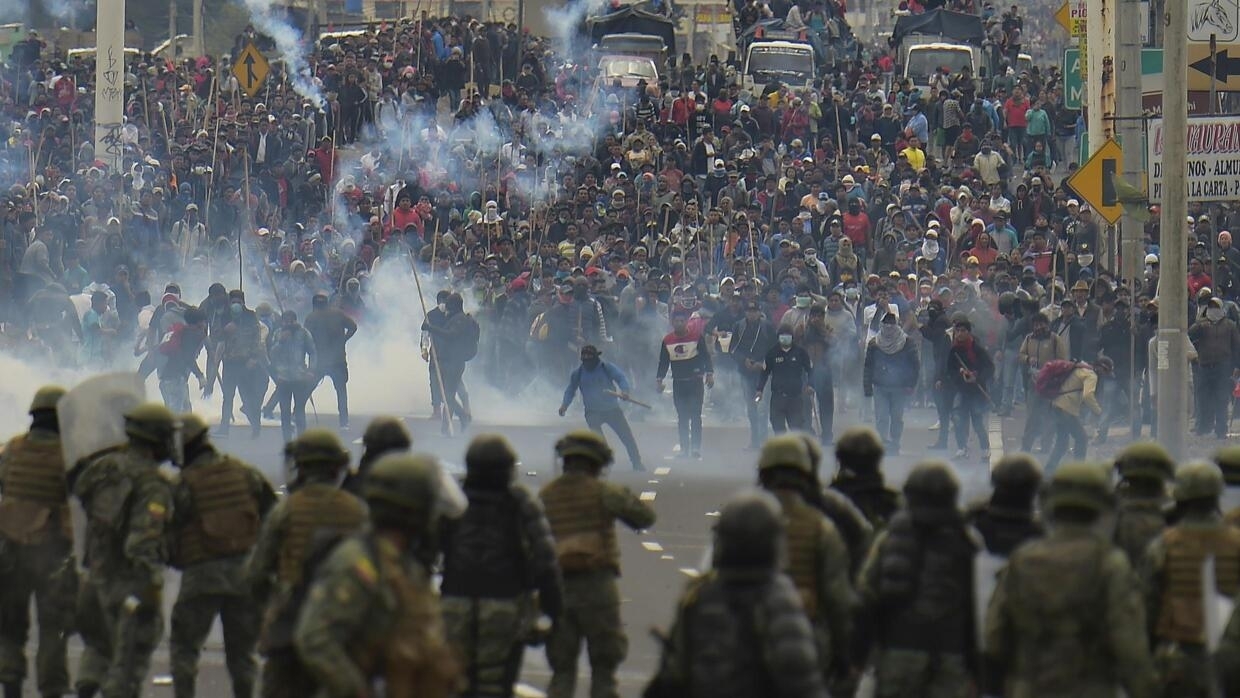 None of the neoliberal experiments imposed in the region or in other countries of the world has been free from violence, from the deployment of various forms of aggression against peoples, their living conditions, their integrity and their rights. It is a formula stained with blood and suffering.

Such is the case in Ecuador, where intense days of social protest are taking place in response to a ‘package’ of economic measures that are part of a broader program agreed with the IMF, signed last March[1]. The levels of repression deployed are unprecedented, as is the magnitude of the social response, which prefigures a new scenario of forces in the midst of the crisis.

The sequence of events is now widely known: Faced with the paralysis of the transport unions and the popular mobilization demanding the revision of the executive decree that doubles fuel prices, the government hastened to decree a 60-day State of Exception, which suspends rights and guarantees and grants extraordinary powers to the executive, unleashing an authoritarian, overpowering and violent escalation that has exacerbated and aggravated the conflict, triggered a nationwide mobilization, and led to a political crisis that has the government’s exit on the table.

But what is observed during these days, both in terms of official violence and social indignation, is not arising from the immediate term but rather from the process of conservative and neoliberal restoration that dates back more than two years, and from a longer process of awareness and affirmation of rights on the part of the population. We are in a moment of synthesis, which condenses previous journeys but which is also marked by uncertainty. A recharged neoliberal agenda clashes with a people who, having experienced a change in their living conditions in the previous decade, an affirmation of their rights, have reacted strongly but within a turbulent scenario. 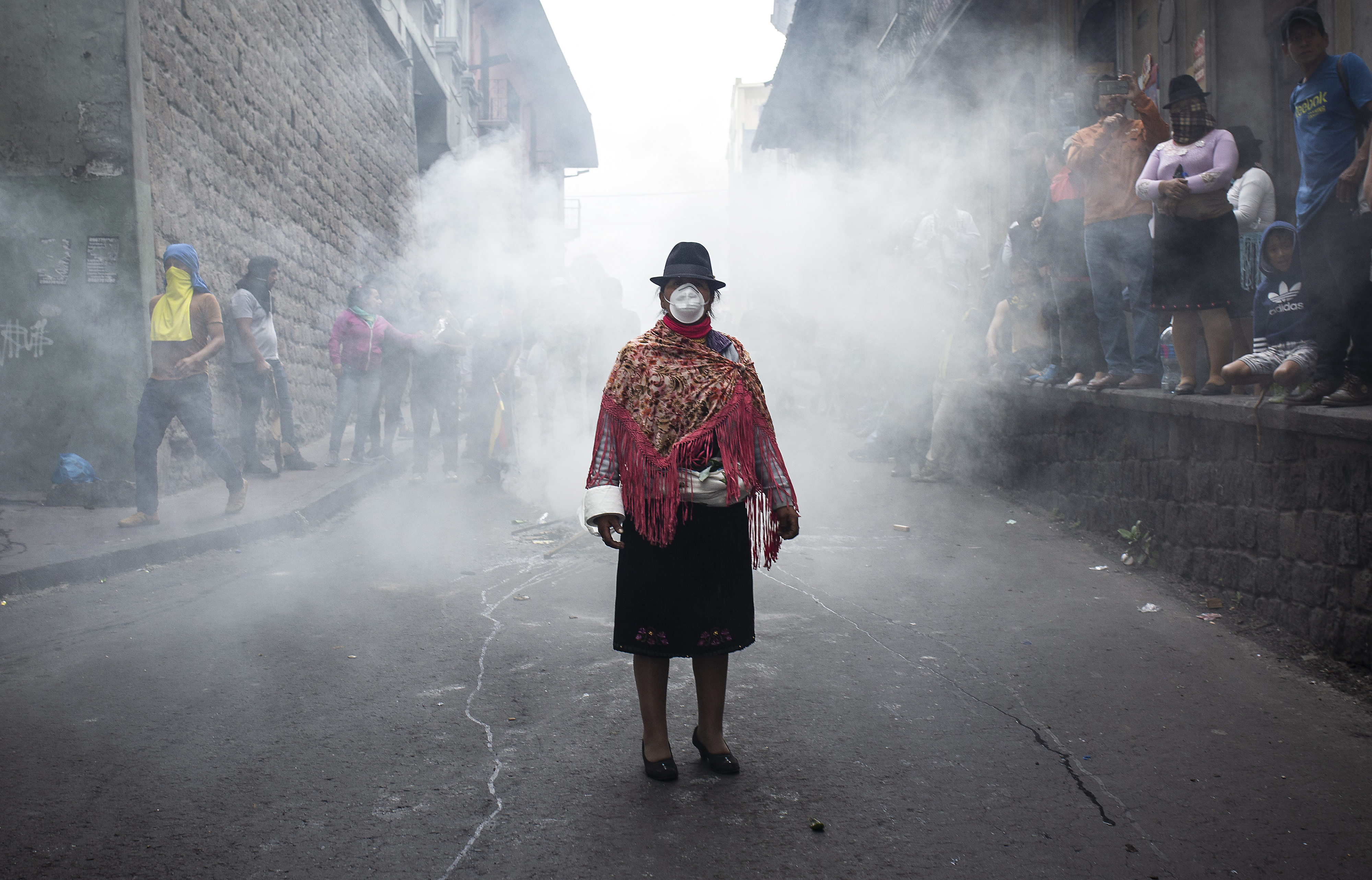 Since 2017, the government that confused rights with interests, dismantled the policies and institutions previously advanced under the 2008 Constitution – with the aim of redistributing and strengthening the state, regulating the market, seeking sovereignty and the common good. The economic policy, led by business representatives, paved the way for the intervention of the IMF, creating conditions of recession and indebtedness in order to justify such intervention. A wide range of sectors, from business politicians whose agenda and interests were made official, to some unions and social leaders who were arrested under pretexts, charged and branded with a blind ‘anti-correism’ and a strange antiprogressism, embraced these policies that have led to the social explosion.

If for a while there was any effort to disguise this agenda with rhetoric advocating in favour of the ”social”, and ”anti-corruption”, today it is openly embraced and servile. Among the few statements made with clarity and conviction by the figure of the President -most of them are hasty, uncomfortable readings-, this one stands out, addressed to two former electoral contenders of the right (Nebot and Lasso) whom he praises as future presidents: “…when they take the reins of a country that we have re-institutionalized, restructured and eliminated all the economic aberrations that could impede the development of the country, at that moment they will be able to apply those wonderful plans that they have for Ecuador” (press conference 4/10/19).

In this task of preparing the ground for the IMF and corporate elites, violence has not been lacking. A soft coup has been implemented since 2017. An unconstitutional plebiscite was imposed to create a Transitional Council of Participation endowed with superpowers, which was in charge of demolishing laws and institutions, of appointing high officials of the different branches of the State, and of countless decisions of all kinds and scope. Along with this, the restrictions imposed in areas such as health and public education, and pro-capital and anti-labour policies, were translated as early as 2018 into a notable leap in levels of impoverishment (some 500,000 people returned to conditions of poverty and indigence). 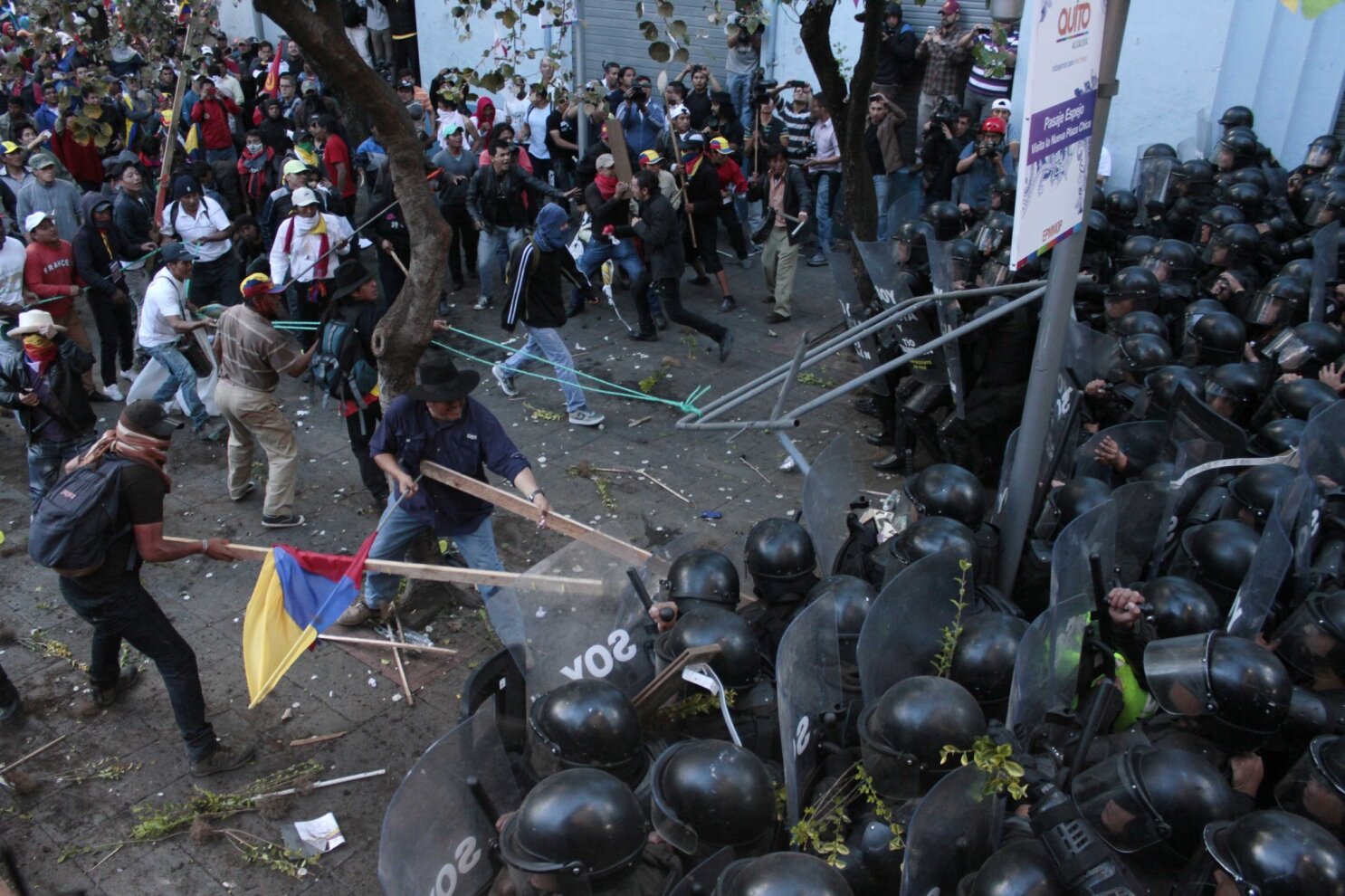 Today, in a matter of days, in the field of opposition, the Citizens’ Revolution Movement is no longer alone. Once the ‘betrayal’ became evident, the movement began to denounce the restorationist turn, in the midst of intense judicial political persecution of its members and the media siege of its mobilization initiatives. The opposition began to repopulate with organizations and forces that could no longer stop the pressure from the rank and file – some former indigenous leader remained in high office until his unreasonable statements in defense of the package forced him to resign. In the heat of the growing mobilizations, it would seem that no one wants to be left out of the opposition, which includes electoral calculations of all colours.

In the resounding social response, forces and conditions are united to define a new conjuncture. It highlights the return of an indigenous movement that resumes the orientations and agenda pushed by grassroots, after an erratic period marked by alliances or alignments that caused wear and confusion. Its capacity for mobilization reflects the validity of the communes, and projects the value of the indigenous presence in several local governments of the Sierra (in the local elections of March 2019 Pachakutik and other indigenous candidates achieved important results).

It also highlights the revitalized presence of a student movement associated with the significance and orientation of public education, now threatened. Likewise, the voice and presence of women is reaffirmed, and this extends throughout the mobilization, either organically or in the tide of spontaneity. They participate from the accumulated experience of confrontation with the IMF, from the protagonism in the criticism to the nefarious impacts on the living conditions that these formulas bring, from the well-known difficulties for work and the maintenance of life that the neoliberal crisis propitiates.

The transport guilds reveal a profile less anchored to their interests and more willing to converge with others. Not without contradictions, they went through a different experience of interlocution with the State, which combined sectoral policies of promotion and incentive with regulation, which are blurring today.

In broader terms, the sheer massiveness and strength of a citizenry that integrated a sense of their rights. It is mostly, and somewhat diffusely, a ‘correista’ base that persists despite the disqualification and stigma with which this current has been attacked from various fronts. Unlike other moments of neoliberal imposition, the mobilization expresses a perception of loss of the advances achieved in a formula of prioritizing life and work over capital, and of resistance to the closing-off of the possibilities of transformation that had been opened.

But the neoliberal power’s resources are varied, combining old political devices with the new media manipulation, direct and symbolic violence, among others. The playing cards of dialogue tables – summoned during the two years to negotiate pacts over the Constitution – are still at stake. To replace the change of government with a partial change of cabinet presented as a concession to the social demand is a direction that is already beginning to take shape. Other actors, national and international, will use ‘good offices’ to disguise governmental clumsiness and seek ways to continue the substance of the agreement with the IMF, perhaps with some small ‘social’ makeover. 1] Between 1961 and 2003, 18 standby agreements had been signed with the IMF. The current one is an Expanded Service, with goals of structural change, modification of institutions and laws whose application is contemplated until 2020. Its anti-public and pro-capital scopes go much further than all previous ones.