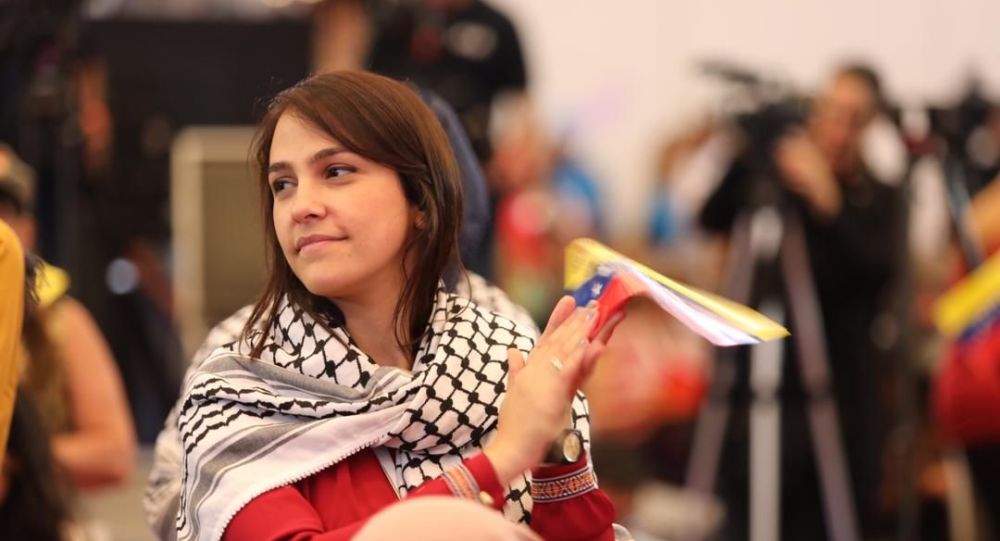 The First International Women’s Congress in Caracas brought together representatives of 110 organizations from 23 countries from all continents. Its development is part of the agreements reached during the Sao Paolo Forum, held in July in the Venezuelan capital.

“It is one of the sectoral events to conduct debates because within the framework of the Forum are developed in a very collateral way and therefore allows us to assume the development and implementation of the agreements,” explained Gladys Requena, vice president of the United Socialist Party of Venezuela (PSUV) women’s sector, from which the momentum of the Congress was undertaken.

The Forum also included developments in Caracas. This is not the first Congress held since the Forum: during the month of August, the Workers’ Congress took place, and soon the Indigenous Peoples’ Congress will be held.

It is about, on the one hand, developing discussion and organization of each social sector while reaffirming the “solidarity of the world with the revolutionary project and with the agreements to reject unilateral sanctions, the criminal blockade that is being developed by U.S. imperialism against the people of Venezuela,” said Requena.

The location in which it has been held is a political action, as was the Sao Paulo Forum.

” We are showing Venezuela that it is not alone, that the women of the world are following its cause and that we are here to see what reality they are living and to tell the world why Venezuelan women are defending the process of the Bolivarian revolution,” said Gloria Inés Ramírez Muñoz, vice president for Latin America and the Caribbean of the Women’s International Democratic Federation (FEDIM).

Ramírez Muñoz, Colombian, was in the opening debate of the Congress, where she shared the main stage with other world leaders and with representatives of the political leadership of the revolution, such as Diosdado Cabello, president of the National Constituent Assembly (ANC).

Along with Ramírez Muñoz was Wafi Ibrahim, from Lebanon, coordinator of the Latin American Arab Solidarity Association José Martí and vice-coordinator of the Arab region in the FEDIM, who underlined the dimension of the common enemy:

“All the peoples of the world who have been victims of the same policy and the same aggression come to this solidarity with fervour, because nobody wants any people of the world to endure the tragedy that we in the Arab region have experienced, the product of all those plans on the part of the United States and Israel”.

Almost five hundred Venezuelan women attended the Congress. The delegation was composed of a diversity of political, territorial and state organizations: representatives of the PSUV, different Chavismo parties, the Ministry of People’s Power for Women, the ANC, members of the Bolivarian Militia, peasant women, community women, Afro-descendants and military members of the Ministry of People’s Power for Defense, where an organization exists to address equality and gender.

The representation was national – from the 24 states of the country – and made visible both the different expressions of women’s organization and public policies:

“We are monitoring how women’s rights are because here there are public policies that the government has been making to defend women’s rights,” said Ramírez Muñoz.

Requena, who was also minister for women and gender equality, highlighted this point: “The Bolivarian Government promotes public policies for the economic, political and social empowerment of women, and policies for the integral protection of women and the guarantee of the lives of women and children, such as the right to breastfeed and humanized childbirth, two flagship programs that we have developed”.

The International Women’s Congress allows us to discover which policies have been developed during these years of Chavismo and which are being implemented in this period of siege. President Nicolás Maduro referred to this, and on Friday night he held a ceremony, accompanied by Vice President Delcy Rodríguez y Requena, where he emphasized the policies made by the government to cover needs from pregnancy, childbirth and schooling.

One of the objectives of wars is women, “the first to be impacted by war, in our bodies, in our territories and in our country,” said Ramírez Muñoz.

“Women are part of the construction of the social fabric in everyday life,” she explained, and as such, the central objective of wars in their different forms of execution. In the case of Colombia, where one of the central objectives is to build peace with social justice, this attack is manifested, for example, in the assassination of social leaders, of human rights activists, where a large part are women”.

In the Venezuelan case, where a war is taking place that Requena calls “multifactorial,” women have been targeted because of their role in homes, territories, organizational processes and political and social mobilization.

“The Venezuelan and international right, the bourgeoisies and oligarchies, have identified everything that is being sustained on the shoulders of Venezuelan women, we are a political target, to depress, to disconnect from the Bolivarian project, we are a target of the imperial agenda”.

The empire “has identified the mobilizing force of women,” stresses Requena. The images of everyday Venezuelan life in the popular sectors reveal a central role for women, in the organization for the distribution of food, the construction of solidarity networks, the Bolivarian Militia or the mobilization in electoral campaigns and political acts.

“We have demonstrated that we know how to resist and that we have a counter-offensive agenda. We are making soaps, toothpastes, eco-friendly cloth diapers, we are sowing, producing flour. Here the empire does not find a woman surrendered, it finds a woman developing her creative capacities and her potential for struggle.

The US policy of siege, as in the case of the economic blockade, does not apply only to Venezuela. Wafi Ibrahim brought his voice from Lebanon, in the Middle East, to “shake the hands of Venezuelan women and tell them we are by their side,” as well as to develop a joint roadmap.

“We need to coordinate actions. The enemy is doing it, all the more reason why people who fight, who have cause, must coordinate their steps and shout at the same time and push in the same direction to reach our goal. The enemy cannot catch us divided and distanced, we have to understand each other and get closer”.

Within that common action sheet debated during Congress is a point that Maduro – during the ceremony accompanied by a draft of the final declaration – affirmed will be part of the central policy: opposition to an open war against Venezuela, a threat that comes from both the diplomatic siege through the Inter-American Treaty of Reciprocal Assistance and the threats coming from the Colombian government and elites.

Ramírez Muñoz explained: “We are calling for Colombian and Venezuelan men and women not to fall into hatred and confrontation, but to strengthen and deepen our bonds of unity, to revitalize our history and joint roots and to denounce what has become clear on the border, and that is that there are corridors of paramilitary groups supported by the Colombian State”.

The International Women’s Congress will establish a roadmap for actions, debates and mobilizations in a context marked by major conflict scenarios, with joint efforts and multiple common enemies.