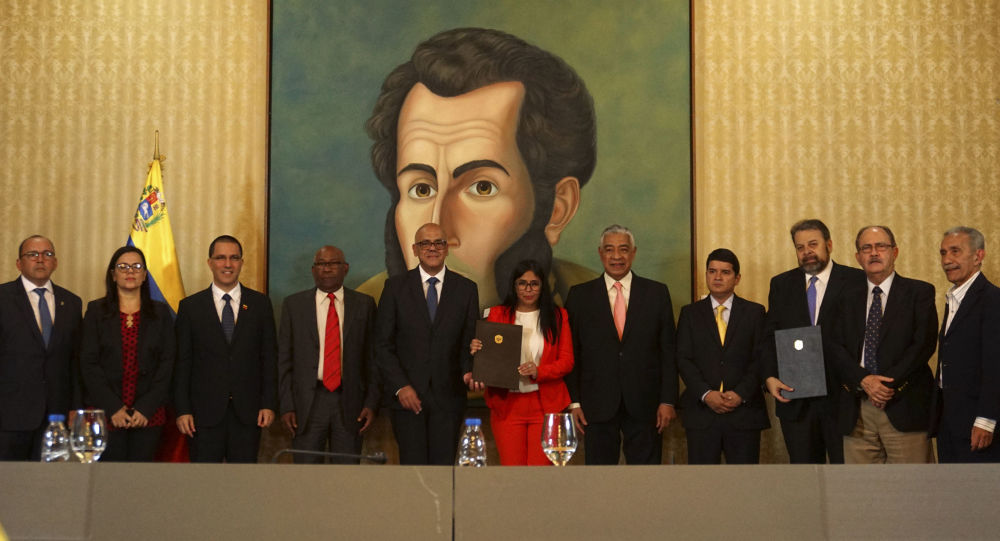 Chess master Max Euwe used to say that “strategy requires thought” but “tactics require observation.”  How can we reinterpret that phrase in the political context of a nation like Venezuela?

The South American nation has been the victim of a continued siege and blackmail that has led political negotiations to a dead end. Washington has become obsessed with getting rid of Nicolás Maduro and has done the unspeakable to provoke it. Even Abrams himself has come to impose who may or may not be candidates for Chavismo in an hypothetical presidential election that only exist in the wishes of the State Department.

The Venezuelan government has not had it easy. It faces a nation that has demonstrated for more than a hundred years that its pulse does not tremble to take war anywhere on the planet. With diffuse excuses it went to the First World War, and without excuses and without explanations bombs the Middle East when it feels like it. So beyond having modern equipment, a moral disposition in the armed forces and the party, and the reason of the defense of sovereignty, Nicolás Maduro has insisted that there is no way to move forward other than peace. An attitude that requires a strategic vision. Like it or not, locals and strangers.

Now, after the scandalous and macabre narco – paramilitary link of Juan Guaidó, the Pentagon’s card turner in Venezuela, and that the epilogue of this shameful episode entitled ‘ self-proclamation ‘ begins to be written, the Government has understood that if the violent faction of the Venezuelan opposition does not want to play the game of politics, then it simply changes the board. That is a tactical movement that denotes an intelligent observation of the conjuncture.

Just as the call to the Constituent [Assembly] closed the way to the civil war in Venezuela during 2017. The agreement signed on September 16 between the Government of Nicolás Maduro and a part of the Venezuelan opposition, can mean not only unlocking obstacles for peace, but redesigning the map of political actors for the coming years in Venezuela.

From Chavismo they analyze the situation: “We are obliged to recover the National Assembly”

As I listened to the points of the negotiated agenda between the Bolivarian government and a part of the political opposition, I could not stop thinking about two past interviews.

Elías Jaua affirmed in December 2018 that it was necessary to “reconstitute the Parliament” in order to “unlock the political game”. He considered that it was possible that Venezuela was a “victim of dispossession of its assets” and that the government and the opposition should reach agreements to avoid a ‘catastrophe’. Almost all scenarios have been met.

When contacting him to know his impressions about the current situation, he did not hesitate to affirm that the patriotic currents and the people were all “obliged to recover the National Assembly for the political stability of our country and for the defense of sovereignty.”

But in addition to the present moment, the National Assembly must serve Jaua’s judgment to “defend and expand the rights of our people, the right to wages, to work, to land, to the leading exercise of democracy, for the development of a mixed economy under state regulation with participation of all sectors, private, public, communal and social in general,” he concluded.

There are sectors of the opposition with a lot of media and financial strength that have been against the agreements. What do you think should happen to shield this agreement from those who seek to hinder it?

The opposition actors who have signed the agreement must be very brave, especially. Make it transparent, second. The country need to knows all the steps that are being taken, so that there is no possibility of manipulating and misrepresenting what is being agreed according to the national interest. And thirdly, to assume with great conscience, the desire of the will of the majority of Venezuelans to recover the right to live in peace, to have a normal development of the country’s institutions.

What should be the role of the PSUV for its militancy, as of this moment?

Today more than ever you should reunite. And those who are in charge of the PSUV must make an effort to reunify the broad plural base that constitutes Chavismo, the unity around programmatic, ethical, political and ideological principles in order to successfully face any electoral scenario that comes in the future, especially the one planned for the year 2020.

Do you think that the United States will support this agreement, or, on the contrary, will seek to boycott it?

The leadership of the United States Government is very unpredictable. We will have to wait for their reactions and, on the basis of that, consider a strategy that allows a direct dialogue with the US presidency to hope that this effort that has begun today among Venezuelans will be respected.

On many occasions the opposition and the government have sought to reach agreements, but have been unsuccessful. Do you think it will be different now? What makes you think that?

I think that for the first time, there is a detachment of a part of the opposition leadership that assumes responsibility to put national and our people’s interests first, and that is positive. Because the country had long waited [for this] step from the opposition leadership, today it has taken place. Now, we must bet that this first step be maintained, and if not, then we must try, once and as many times as necessary to return peace to the Venezuelan family.

The loss of the 2015 Assembly was analyzed many times as an erroneous response of the people to the effects of the economic war. A kind of punishment vote for Chavismo. Can a similar defeat be repeated again? What to do to avoid it?

I always begin from the fact that the people are right to be mad and express their discontent regarding certain situations. I believe that more than the people, it is we who are in the revolutionary leadership who have to undergo processes of revision of our methods and policies, and of rectification where it is necessary to rectify. In the face of an electoral process, the Bolivarian government must take very urgent, contingent measures, with respect to the recovery of wages, the purchasing power of Venezuelans, and must work to protect our currency and a sustained and investment policy in bolivars in agricultural production, the development of public works to increase employment. It is necessary to retake the regulatory role that the constitution gives the Venezuelan state in economic matters, to avoid situations that aggravate the condition of our people and with that there is a political and ideological malaise that can again generate a setback in the parliamentary elections.

The opposition perspective: “The Venezuelan government is entrenched and must keep its word”

In a dialogue with Sputnik, Enrique Ochoa Antich already considered a few months ago, that Juan Guaidó’s intention to activate the TIAR was a shame, as it was inconceivable that the National Assembly advanced in a “strategy that encrypted its success in the presence of foreign armies in our homeland.” Some time later, Juan Guaidó not only asked for the activation of this mechanism of military interference, but also made it clear that he is willing to get involved with Colombian narco-paramilitarism, if it is to achieve political power in Venezuela.

Ochoa Antich remains optimistic that the recent agreement “will open a new era in the government / opposition relationship.” However, it was necessary to ask what could be done to prevent such advances from being torpedoed by those seeking a violent exit from the political crisis in Venezuela.

“To bulletproof the agreements, I believe that the democratic country must isolate the two extremes: the government’s perpetuationist who does not even consider the idea of republican alternative and the extreme of the opposition that, to reach power, plays with the idea of a foreign invasion, a military coup, a civil war and sanctions and more sanctions,” said the Venezuelan politician and writer.

Ochoa Antich, who was the national executive secretary of one of the most important opposition parties, Un Nuevo Tiempo, thinks that minimum conditions must be guaranteed to legitimize this new approach.

“There must be freedom for political prisoners; the empowerment of all parties and the return of exiles; a new CNE that raises confidence in the vote; it must be sure to attend to those who suffer most from hunger, lack of medication and the chaos in the services, beginning with the one of the electricity and the water. Perhaps it is necessary to think about installing, as it has been proposed by the Alliance thorugh a Consultative Referendum, an autonomous economic and social dialogue table, independent from the political dialogue table”, he adds.

What should be the role of this opposition sector in the face of its electorate?

The extremist opposition will surely be dedicated to disqualifying these agreements. The democratic opposition must defend them, argue them, discuss them with the country, and prepare to democratically select their candidates to offer the best names for the new AN (National Assembly). It must also devise and propose ways for the active participation of the people in the resolution of the conflict. The role of the trustee of national sovereignty is crucial if you want to legitimize these agreements. There is the figure of the consultative referendum as an ideal instrument to achieve it.

And the United States? What position do you think it will take?

It is clear that in the US there are extreme sectors that will try to boycott the agreements. The democratic opposition and even the government must take advantage of this juncture of Bolton’s removal to speak directly with the Trump administration. Instead of doing, like Chávez and Maduro so far, that awkwardly provoke an extreme imperial reaction from the US, government and democratic opposition should both, like Evo, Lula, Correa, Pepe Mujica, etc., isolate the gringos warmongers that also used Bolton as an interlocutor.

It is about offering options to the empire that, without compromising our sovereignty, allows peaceful coexistence. The first thing is to demand the lifting of the sanctions. And for this, rely especially on the UN, Mexico, Uruguay, the future Argentina of Alberto Fernández , and, of course, Europe.

Do you think we are facing a ‘deja vu’? I mean … in the face of so many failed dialogues, what can make us think that this will be different?

I can’t assure you. I believe that this government, beset by all sides, entrenched in Miraflores to defend itself and unable to advance minimum economic and social work, is bound to keep its word. And I believe that this opposition, this third option, is demarcated from the government but also clearly demarcated from the classical opposition, committed to the democratic route for a change of government, is also in the readiness to comply. But that credibility between the two is built, not decreed. The story to come will tell us how good intentions come true.