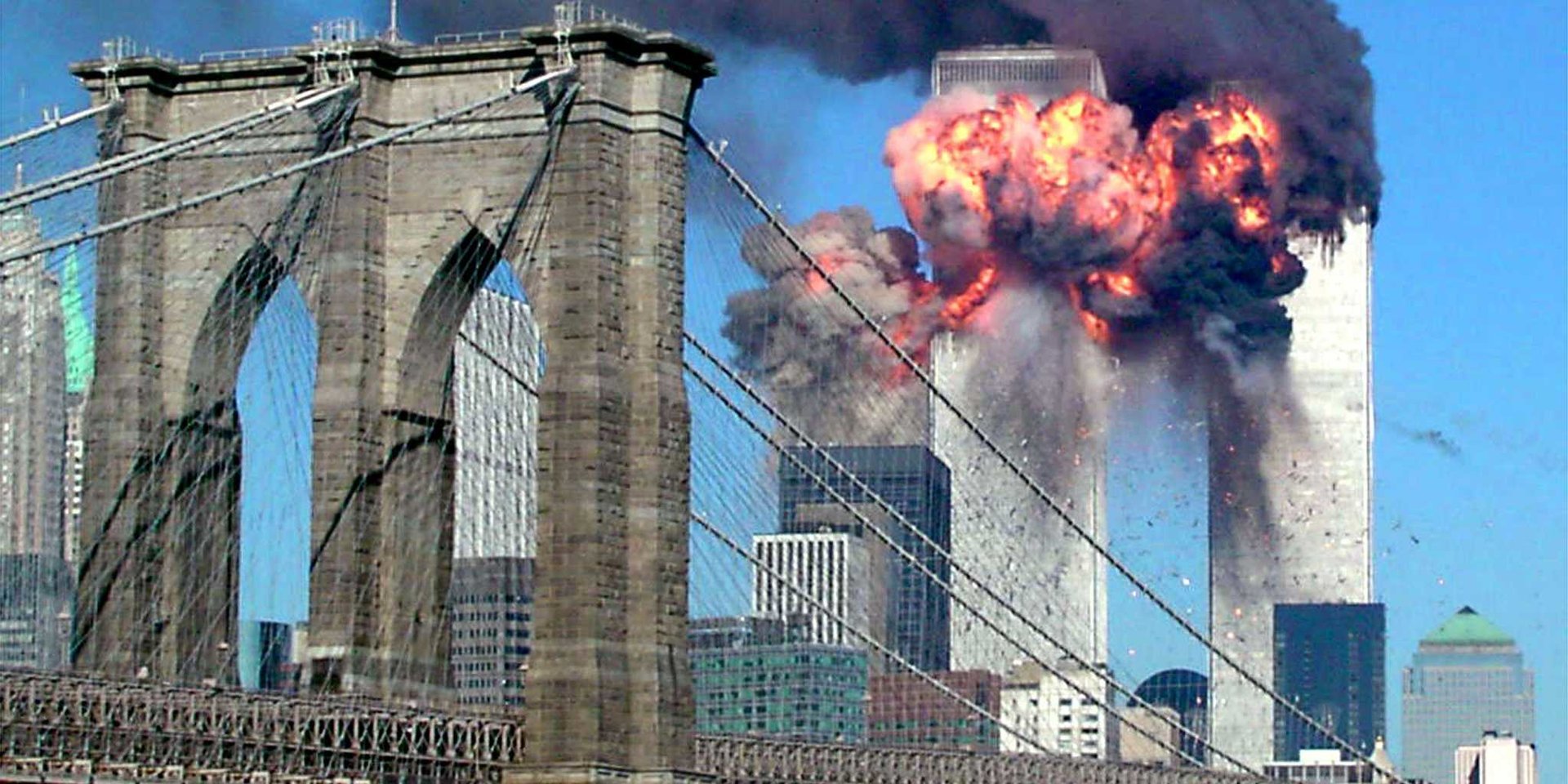 Last week had two fateful and mysterious dates for the United States: Wednesday 11, with the terrorist attack on the Twin Towers and the Pentagon, and Friday 13, which is the gringo version of our “Tuesday 13”.

Friday the 13th, of course, is pure folklore. But September 11, 2001, caused a serious, almost disabling injury to the notion that the people of the U.S. had about their own homeland, its laws and its values.

According to several very important analysts, the official versions of the attacks in New York and Washington are not satisfactory. Moreover, it has been reported that much key information was suspiciously concealed.

Republican ex-senator Ron Paul of Texas has endorsed the versions which suggest that behind the terrorist action there are very dark underpinnings that justify the emergence of conspiracy theories that point far beyond the accused terrorists.

In fact, the former Secretary of State of George W. Bush’s government, Condoleezza Rice, admitted in her memoirs that Russia’s own president, Vladimir Putin, called Bush by telephone to warn him that his intelligence services had detected that an imminent catastrophic attack against the United States was being prepared from Afghanistan.

That was on September 9. That is, two days before the attacks on the Twin Towers and the Pentagon. But by her own admission, Condoleezza Rice had refused to believe him, do you know why? Because she thought Putin was simply expressing “resentment”.

And there are many more elements that suggest that behind that terrible September 11, 2001, very ruthless strategies were being played out that led to the beginning of an endless U.S. war in West Asia, that area we call the Middle East.

How are the American people facing that anniversary today?

With 14 months to go until the U.S. elections, where current President Donald Trump is up for re-election, polls agree that any of the three current dominant Democratic pre-candidates will beat him by a margin of up to 10%.

However, the polls were scandalously wrong before. Just two days before the 2016 election, it was claimed that Trump had no chance of winning. Indeed, here in Chile, only our analysis predicted that Trump would win.

Now the situation is even more unstable and confusing, Trump has lost around 3% of his popular support. Polls show it at around 37% of voting intention, while a good part of that loss is due to the desertion of Republicans who no longer trust him.

However, within the Democratic Party only 30% of the voting intention supports the candidacy of Joseph Biden, former vice president of Barack Obama, while 44% supports the more leftist Bernie Sanders, Elizabeth Warren and Kamala Harris.

Indeed, an analysis in the Business Insider goes so far as to say that if Joseph Biden is beaten over the other three leftist candidates with the most support, the result could be a loser. In other words, that Donald Trump can get re-elected for the next four years.

But who are those faithful and committed Republicans who stand firm alongside Trump?

They are mostly white. But Latinos, Asians, and other racial minority groups are not scarce; they remain attached not to a government program or a political doctrine, but to an amalgam of judgments and prejudices, fears, resentments, and, to a great extent, to the longing of a paternal figure, half messianic, who will guide them through a time they fail to understand. 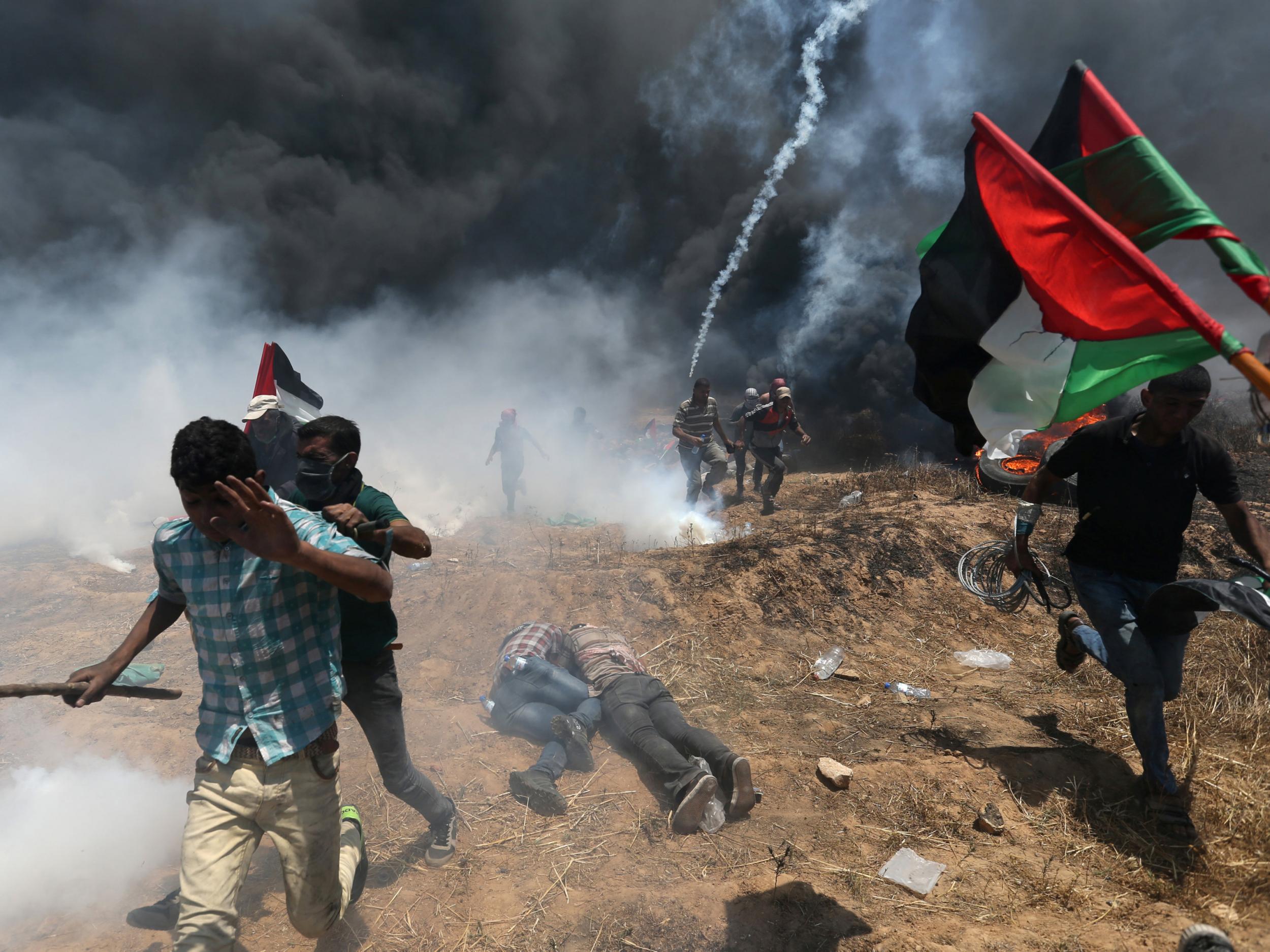 In the United States, at this time, there are an estimated 50 million people in the so-called Evangelical Zionist Movement, who form a disciplined militant base of an ultra-conservative or ultra-right character, and blindly believe that if their country ceases to support Israel, God will become angry and deprive them of His protection.

Moreover, they believe it is the U.S.’s duty to help Israel achieve complete dominion over all the territory it had during King David’s reign. This means that there is no room for any Palestinians. And that is so that the prophecy of the second coming of Christ can be fulfilled, that he will now come with a sword in hand, to take his believers to heaven and send everyone else to hell.

In a conservative religious debate on Sept. 6, Yahoo News journalist Jon Ward reported that if the Democrats win in 2020, there will be an extermination, a massacre of Christians led by Sanders or Warren, and their leftist cronies.

They even compared Bernie Sanders to the Roman emperor Nero, the one who is behind all the killings of Christians ordered by Diocletian, who was an emperor nearly 20 years after Nero’s suicide.

The phenomenon of intense combative mobilizations, of people rabidly terrified and blinded by a reality of history and social evolution that they cannot understand, is not only taking place in the United States. In Europe, too, there is an impressive resurgence of the ultra-right, including those openly neo-Nazi groups nostalgic for Adolf Hitler.

In Finland, in this year’s elections, the neo-Nazi movement called “The True Finns” got 17% of the votes, just two tenths of a point from defeating the social democrats, who are center-left. The far right has already conquered the government in Poland and Hungary, and in Switzerland they are now a parliamentary majority. 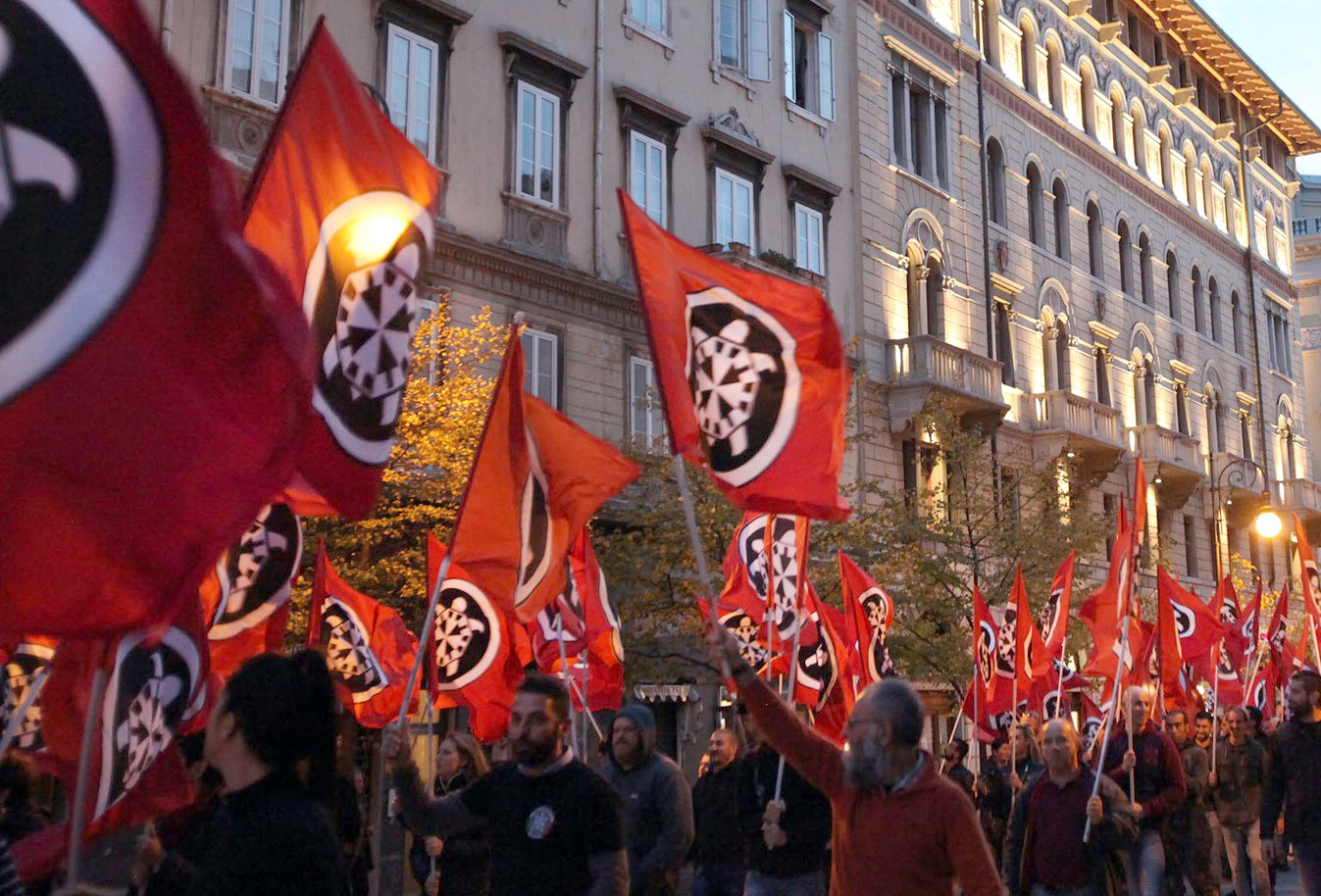 Italy’s CasaPound fascists on the march.

In France, Italy, Denmark and Holland, the far right is now the second largest political force. And they are a robust third force in Germany, Sweden, Austria and Greece.

What unites this far-right tide is, above all, a furious rejection of the arrival of immigrants. But, along with that, they also reject the value changes to the old morality. They are violently homophobic, anti-feminist, anti-abortionist. And together with that they are ultranationalists, they resent global cultural and international organizations such as the European Union (EU) and the United Nations.

And, in their efforts to prevent evolution and transformation, they tend towards violent action, both at street level and in support of military action in countries that are displeasingly different.

Curiously, however, this ultra-right is antagonistic to neoliberal globalization. In their speeches they call for military and economic self-defense, centered on strictly national interests. In doing so, they certainly support the position that supposedly guided Trump’s government under the formula, “Make my country great again”.

It is precisely the countries with the strongest right-wing forces, such as Hungary, Austria, Sweden and Finland, that are best placed to re-establish trade and political relations with post-Soviet Russia, which they also see as ultraconservative and nationalist.

In any case, this ultra-right tide, with its strong neo-Nazi ingredient, seems to have the fluctuations of a state of anguish. Something that may intensify or weaken depending on events, depending on whether there is a danger of being poor again or the danger of a nuclear bomb, and this is accentuated or weakened by the latest news reports.

Even though the right wing has a substantial majority in the European Parliament, it has remained faithful to the EU’s decisions in the clashes with the United States. For example, in terms of continuing to support the Cuban government and financing social development projects on the island, defying the furies of Trump and his Pompeo.

What about the rest of the world?

Meanwhile, in the rest of the world, the events continue to coalesce like pieces of a dialectical mechanism that functions without paying too much attention to political leaders, strategists, economists, etc…

On the Iranian front, to the fury of the US, the huge Iranian oil tanker released by the justice system in Gibraltar and besieged by US warships finally reached the port of Tartus in Syria and sold its two million barrels of oil at a reasonable price.

In Saudi Arabia, Yemeni forces launched a counterattack with drones against the largest and most important oil refinery, causing the destruction of much of its facilities, to the extent that Saudi production of refined oil and gas was halved.

In Hong Kong, the furious anti-Chinese protests have been answered by furious pro-Chinese protests, of which the Western press had reported practically nothing. In recent days the police have instead endeavored to keep separate groups facing each other in a tone of dangerous aggressiveness.

The major corporations based in Hong Kong, and the multitude of workers who depend on them, are reacting with warnings to move elsewhere, to Shanghai or Singapore. Still in Hong Kong 75% of all international trade is conducted in Chinese currency, while Singapore only accounts for 3%.

In other words, the threat of destroying Hong Kong’s operational normality has already meant that protests have had to fall to a very low level.

This means that the threat of destroying Hong Kong’s operational normality has brought the protests to a very low level, while the anti-Chinese ringleaders, numbering several thousand, are anxiously trying to obtain asylum in Singapore, Taiwan or Australia, since the United States will only receive a few militants.

In Latin America, Donald Trump’s and Pompeo’s call for military action against Venezuela under the Military Assistance Treaty (TIAR) has not found any sympathetic response. Not even with the Brazilian Bolsonaro.

Instead, U.S. specialized publications have mentioned the arrival of important shipments of military supplies to Venezuela, which could include Kalibr missiles, which have a range of 2,500 kilometers and are similar to U.S. Tomahawks.

Those are the missiles that Russia has deployed in Kaliningrad, capable of reaching any city in all of Europe. They are usually endowed with high-powered but conventional warheads, and they can be quickly endowed with nuclear warheads.

Likewise, it was confirmed that an agreement is now in force for the arrival and permanent presence of Russian warships, including submarines, at certain naval bases on the Venezuelan coasts, in the Caribbean Sea and the Atlantic Ocean.

Furthermore, it was confirmed that the great Brazilian company Petrox was selling two important oilfields in the middle of the Amazon, and a bill is being drafted that will allow the sale of up to 25% of the entire Brazilian territory to foreign capitalist companies.

As we can see, history continues its course with the imperturbable dialectic of the universe.

The hippies said that “life is what happens”. And what happens is never exactly the same as what we had planned.

In what way will the future come to us? 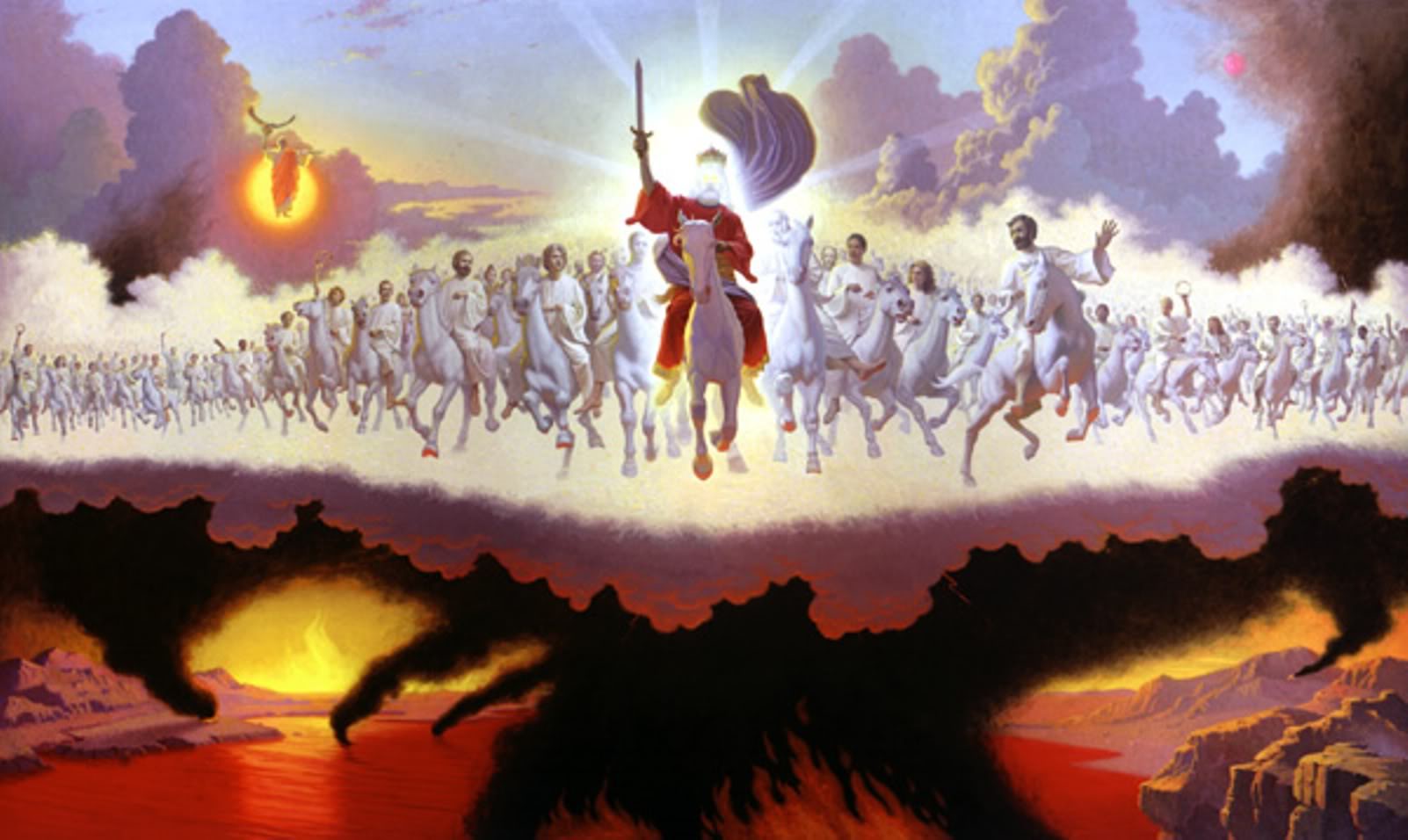 Is Jesus really going to return with a great deal of anger and the desire to massacre the pagans?

Or is there a God who is much more kind than the one they describe in the Bible?

Until next time, friends. Take care of yourselves. There is danger… but we already know that.