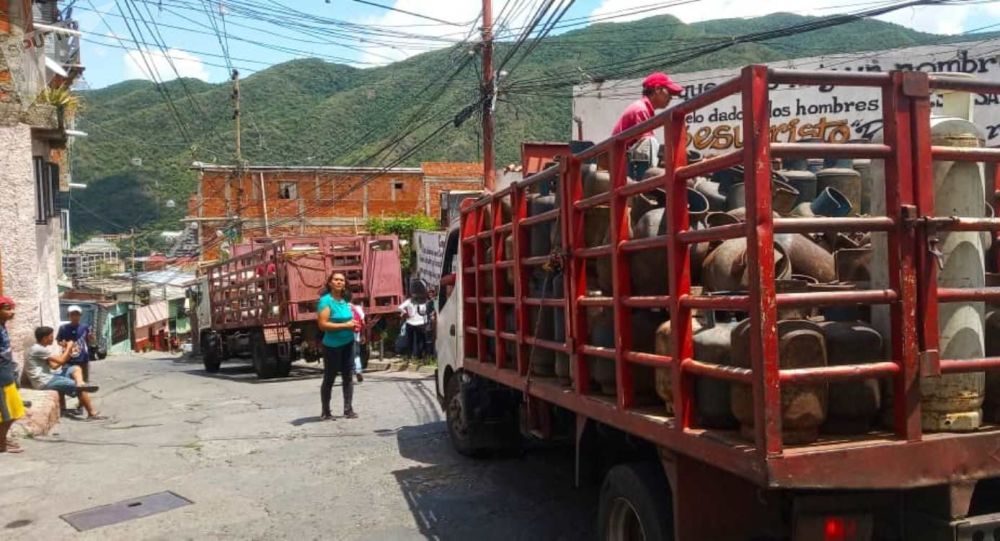 In Venezuela there are companies that operate entirely managed by organized communities. One of them deals with the supply of gas in a popular neighbourhood in the south of Caracas. Sputnik went to learn about this experience that illustrates one of the central themes of Chavismo.

“Who is willing to take on Trump? Everyone in the room raises their hand. César Negrín, spokesman for the socially-owned Antímano gas company (EPS), asks the question in the middle of the assembly to debate the functioning of the EPS. It unites the parties: the struggle for gas, prices, state of war, and the U.S. president.

A spokesman in charge of a communal council stands at the door of the cylinder depot where a poster shows the total contribution made by the neighbours.
Caracas, Venezuela.
Sputnik / Marco Teruggi

Each Wednesday’s assembly is attended by those who are part of the EPS along with spokespersons for the 106 communal councils to which the company provides gas services. Each communal council is an organized space within the neighbourhood where an average of 350 families live. 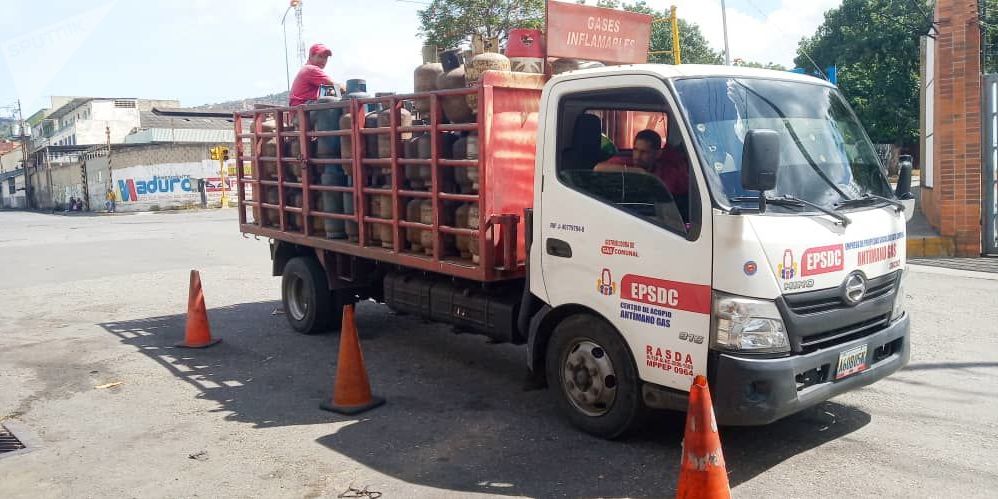 Out of the total of 106 communal councils, about 80 have active participation in the dynamics of the organization of the EPS every Wednesday. It is the central space for effective functioning: “The first thing is organizational, then we go to battle, we meet again to see what went well and what went wrong,” explains Negrín.

The battle is in reality manifold: collect the gas bottles, fill them, distribute them up the hill, where the communal councils to which the EPS supplies are located. Above is very high; the Caracas neighborhoods climb on steep streets, and here, in Carapita, from the top you can see the entire neighbourhood, the centre of the city and lastly the Ávila hill, which separates the city from the Caribbean Sea.

“We must have a sense of collective ownership of the means of production, the company’s trucks belong to all the communal councils,” Negrín continues. The formula has worked.

“We gathered several community leaders, who were here fighting, looking for ideas and trying to move this forward, to give shape to a company that we wanted to set up. This is how the EPS project began, says Sonia Fernández, who is part of the company. 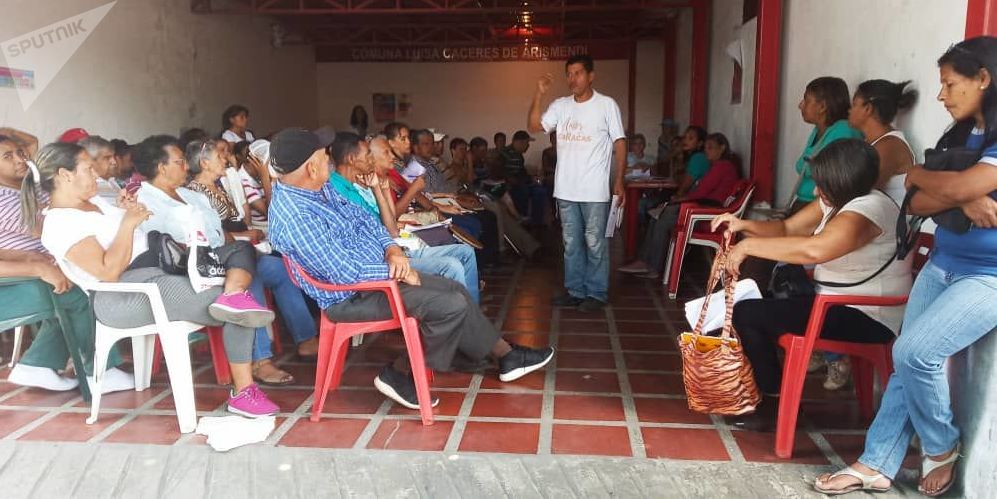 They began to organize themselves among several communal councils in February 2014, initially for the most urgent of that moment, which was to control prices and trade. Then came the idea of building a socially owned company together.

They began to organize themselves among several communal councils in February 2014, first for the most urgent thing at that time, which was to control prices and shops. Then came the idea of building a socially owned company together.

Beyond the concrete needs of the community to resolve this demand, the decision to open the gas market was the result of a government policy that proposed transferring this responsibility to organized communities. The communal gas companies were then part of a national design of the Bolivarian revolution.

Two years passed between the birth of the proposal for an EPS from the communal councils of Carapita and its realization. “We had the will and the faith to do this, but the State was the one that had to purchase the trucks,” says Sonia.

Finally, on November 28, 2016, the EPS Antímano direct gas was inaugurated. It was endowed with three trucks, with capacity to load 230 gas cylinders each. They provided the company with an organizational structure, with committees for planning, mobilization, administration, communication, comptroller’s office, and on Wednesday mornings they established a joint assembly day between the EPS and the communal councils.

“The directly owned social enterprise works as long as there is popular organization guidance, and participation, otherwise it would not be directed by the people, through their suggestions and needs, communities know the problems, make proposals, and provide answers to their own needs,” explains Negrín.

The truck with its hundred stacked cylinders climbs the hill where motorcycles pass, neighbours chat and the midday sun falls with a verticality that dazzles. He stops in front of a gate where he goes to unload the full cylinders. The neighbours wait to remove them.

On Wednesdays, the assembly establishes the distribution schedule. Once the order of the truck routes is agreed upon, the spokespersons of each communal council must notify their community of the day on which they must return the empty cylinders. The next step is the EPS truck collection that takes them to the state gas filling plant, and then returns them to the communal council.

Everything is entirely managed by the EPS and the communal councils. That’s why it has the name “direct”.

“We don’t sell gas, we provide a service,” insists Negrín repeatedly during the assembly. The cost of filling the bottles in the filling plant is symbolic, “it’s practically free,” explains Sonia.

Therefore they ask for a collaboration that they call community contribution. “This contribution is established by prior agreement with the communal councils based on a system of costs: we post all our income and expenses, from there the price is determined, the amount that allows us to work and operate the company. 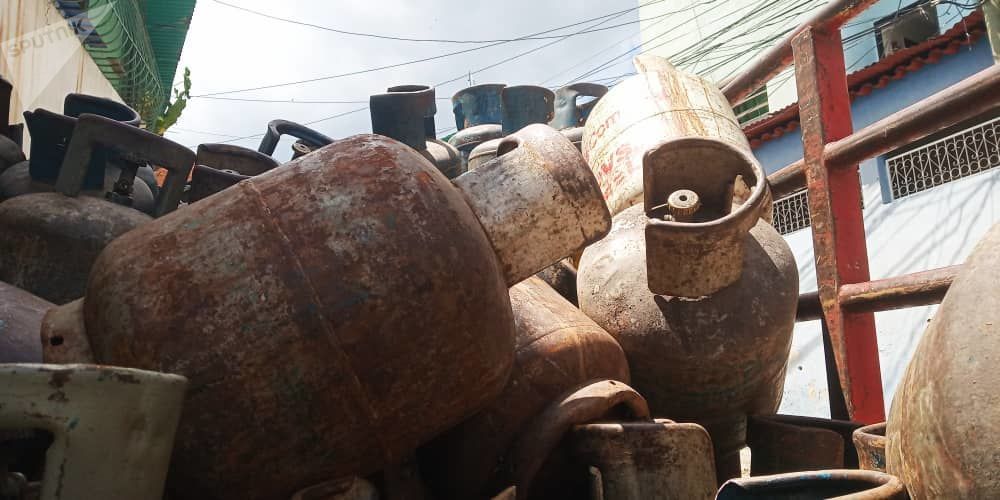 In this way the price of the cylinder is affordable and the product of a collective agreement. Those who cannot pay it are not left out, since they are not a company to enrich themselves, they stress. “Nobody is the boss here, we are a group with a vision and a mission that is to provide a service, if you come with a capitalist vision, which needs for expensive cell phones, it is not the appropriate company,” says Sonia.

The Antímano gas company takes the bottles free of charge to the food houses, schools and medical offices that are within its radius of action.

“It’ s tough,” says Sonia. The biggest problem is in the state filling plants: “the filling is done by queue, the one who arrives first gets in, now because of the shortage of gas, trucks do not arrive, ships are not allowed to pass through, and the war situation has become brutal”.

Not loading the bottles means a lost day for the community and for the company. Sonia added that there is another central problem: corruption.

The organizational achievement has allowed them to tackle complex situations: “people are committed and we are well aware of the situation we are in, we have not been able to provide services for a month or two, but since we meet here, we hold assemblies, we inform, and they have patience and believe in our company”.

The EPS of Antímano gas is part of the daily life of the communities, their trucks going up and down with full or empty cylinders are part of what is usually seen in the hills of Carapita. They have acquired legitimacy, experience, and plan to build other socially owned enterprises: one for packaging and distribution of food, and another for transportation.

The objective is to respond to the needs of the communities from the communal organization itself. This has been one of the keys to the Bolivarian revolution since the zero hour, and one of the most powerful elements of the process. “What is Trump thinking about us? He threw Bolton out, that lunatic couldn’t cope with the Venezuelan strategy,” says Negrín.