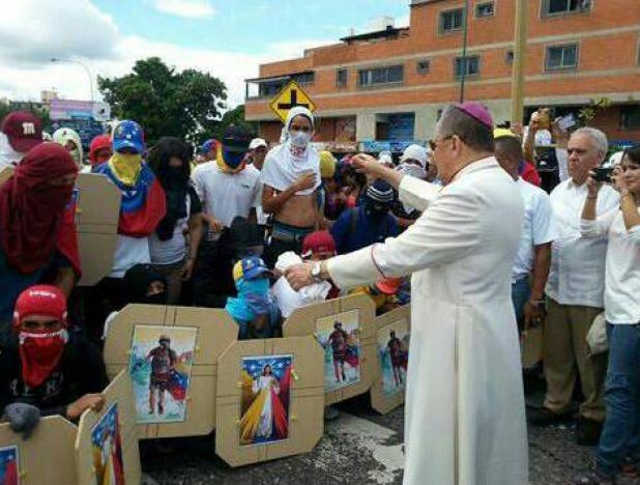 Sputnik’s Marco Teruggi talks to Father Numa Molina about the Catholic Church’s leadership’s commitment to radical violence in the country.

Venezuela’s ecclesiastical leadership has openly held pro-coup positions in in the past. In this discussion with news portal Sputnik, Venezuelan Catholic Priest Numa Molina analyses the contrast between the positions held by the faithful masses and the religious hierarchy, which he describes as sponsoring a violent regime change that would be like “entering hell.”

Images [in 2017] of bishops blessing armed right-wing groups (1) were the culmination of a long history of the ecclesiastical leadership’s opposition to the Chavista process. “It was arrogant to side with the violent groups, the ruling class which wants to oppress the people through these violent methods,” Jesuit Priest Numa Molina reflects as he recalls those scenes (2).

Molina is also a leader and accompanies those from the poor slums in Caracas. He is one of the leading voices of this broad “church” that has a critical view regarding the Catholic hierarchy. “The Church is the [sum of the] baptised people who are Christians and fight and dream every day. The Church is not merely the bishops and the priests, they are the hierarchy, a very minimal group that is called for service,” he says.

That leadership has mostly turned its back on Chavismo, the two Chavista presidents and the millions who identify with this transformative movement. Putting things in perspective, Molina summarizes this position as being an “opposition to the revolutionary process. The people don’t share this position, the people have understood where they are going, but that hierarchical group has not understood the need for independence, liberation, emancipatory struggles.”

Venezuela has traditionally been a Catholic country. “It was an emporium of popular Catholicism and devotion, which is present in the common people who believe in [religious ceremonies such as] processions,” explains the priest. Manifestations such as the Dancing Devils of Corpus Christi (3) and the Parranda of San Pedro (4) –– both recognized as intangible cultural heritage by UNESCO –– are some of the best-known examples.

Hugo Chávez himself, as well as President Nicolas Maduro, was a Christian belonging to the Catholic Church. “Chávez did not waste time quarrelling with the minority of [the hierarchy of] Catholics, but directed himself towards the majority, the common people. He connected with them, lived his church-going Catholic status, and spoke of Christ right to the end.”

The role which the Catholic leadership has assumed in opposing Chavismo has damaged Catholicism itself. According to Molina, many believers have stopped attending mass, stating that it has been converted into “a platform from which the [priests] talk badly about the government every Sunday.”

The Jesuit priest’s masses are televised on Sundays at 6 and 9 am by two state channels. Several people he talks to have chosen, he says, to watch him on television instead of going to church because they are no longer “schools for formation in Christian values.”

The impact on the Catholic Church has been significant: “Many people leave the church and are left without any religious creed, and others choose to move to evangelical churches, ancestral religions or santería,” he explains.

This is one of the causes of the decline of Catholicism in Venezuelan society, but it is not the only cause.

The priest also attributes this decline to a [North] American program initiated in the 1960s, during [Richard] Nixon’s presidency, when studies by several specialists concluded that one of the factors of Latin American cohesion was religion. This was not just any period, but was the heyday of Liberation Theology, of convergence between priests and liberation movements, with founding moments such as the Medellin Conference in 1968 (5).

“They sent the ‘made in USA’ churches: the first were the Mormons, then the sects, which are not constituted churches, which came to Latin America to divide the people,” Molina analyses. The Catholic Church has been weakened by this. But its symbolic weight has not disappeared. 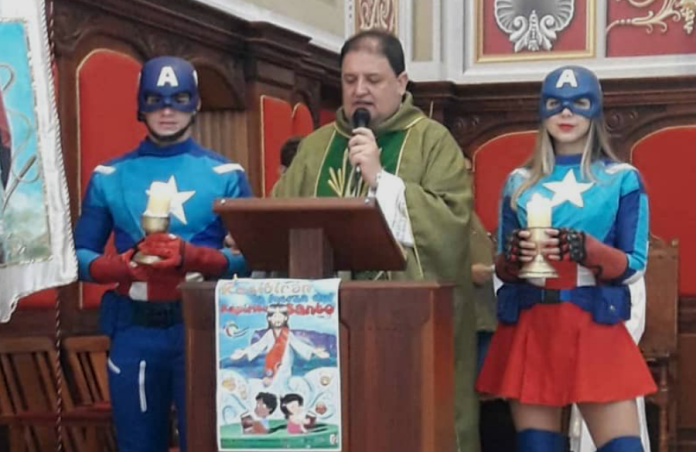 Two figures dressed as Captain America were invited to join the priest giving mass at the Santa Barbara Church in Merida City, Merida State in January 2019. The photos caused outrage after they were made public by the country’s Communications Minister. (@hr_rada / Twitter)

There is a dimension to dialogue that the priest stresses as necessary: dialogue within communities.

Part of the [opposition] strategy of betting on prolonged exhaustion, attacks on the economy and the blessing of oppositional violence by bishops is to fragment the social fabric, to undo it and break it to the point of no return.

“We need good judgment, and it begins with the bringing together of sectors which think differently [to Chavismo], but which are able to think and look at things as they are, with those who think the same [as Chavismo]. One thing that is affecting us tremendously at the moment is the lack of honesty concerning the reality. We see it and we are able to change it completely. However, if it is night-time, we say it is daytime,” says the priest.

Molina highlights “the culture of bringing people together that Pope Francis is promoting” and the need to implement it “horizontally” in communities, communal councils and communes.

“I believe in the dialogue of the grassroots, I am concerned when the hierarchy is left talking among themselves and below are the people who are the majority. We cannot just stay in a leadership-led dialogue.Do I not have the capacity to dialogue and weave the fabrics of peaceful understanding in favour of the country, the municipality, the neighbourhood or the commune as a common person?” he says.

This resolve in the field of coming together and peace is essential. Particularly because there are political forces that bet against it.

The [Church’s governing body in Venezuela, the] Episcopal Conference (6) seems to be heading towards such a position: “According to its latest statements and the declarations its leadership has given, there is some interest in siding with the most radical groups in the country seeking to overcome the crisis through violence,” Molina says.

The blockade and the Vatican

How do you dialogue when there is a blockade which looks to suffocate a society? Numa Molina does not hesitate to classify the actions of the United States as a crime against humanity. “It doesn’t have any other name,” he says.

“All [the US government] cares about is the Venezuelan natural resources, it is not interested in the Venezuelan people. This has recently been made clear through the revelations of [US Secretary for State] Mike Pompeo when he says that [the US] has been looking to make Venezuela implode for a long time. Where are international law and self-determination?” Molina says.

The Jesuit priest raised the subject during his visit to the Vatican in early June. There, he had a “brief” interview with the Pope and gave him “a small report about the reality of what was going on here,” as well as meeting with the [Vatican’s] secretary of state.

In addition to the blockade, Molina raised two other points: dialogue and the humanitarian issue.

“It would be foolish to ask the Pope if he wants us to dialogue, he invites us to use dialogue every day, that is part of what he teaches as Pope, and social dialogue between peoples and governments is enshrined in one of the apostolic exhortations. We must have dialogue,” he explains.

However, he also points out that the Vatican’s position in these talks (7) is, for the time being, that of observation. “I think the experience of participating in previous dialogue [between the Venezuelan government and opposition] was quite unpleasant, I know that the representative the Pope sent to participate in the dialogue [in 2017] was even verbally assaulted by a member of the opposition,” he says.

We still don’t know what will happen to the dialogue. What will the Vatican do? “So far, [Pope] Francis, who has the last word, has not made any pronouncement about it,” says Numa.

What is certain is that the necessary overcoming [of the crisis] is through agreements and not through violence: “by [using violence] no one will come out of the crisis but rather we enter into hell”.

(1) In June 2017 Archbishop Antonio Lopez Castillo was caught on camera blessing an armed group of right wing extremists in Barquisimeto, Lara State. Lopez Castillo is the Church’s highest representative in that state and a member of the Venezuelan Episcopal Conference (CEV). During his blessing, the Archbishop stated “Enough of pacifism, it’s time for the people to react.”

(2) The opposition-led street violence of 2017 looked to force the elected government of Nicolas Maduro to resign and halt the calling of elections to the National Constituent Assembly. It consisted of a range of violent methods, including targeted bombings on public/state entities, street barricades, persecution of government supporters, and the attempted sabotage of the electoral process of July. 127 citizens died as a result.

(3) The Dancing Devils of Corpus Christi is a cultural-religious celebration originally from Yare, Miranda State, in which a network of devoted Christians imitate defeated demons through the use of masks and choreographed movements. The celebrations take place on the ninth Thursday following Holy Week in the central states of Miranda, Guárico, Carabobo, Cojedes, Vargas and Aragua. On that day, members of the local parishes dress in red and adorn highly elaborated masks representing the devil, who after hours of struggle, eventually bows to the beneficence of the Holy Sacrament. It was recognized by UNESCO as intangible cultural heritage in 2012.

(4) The Parranda of San Pedro is a traditional festival celebrated in the towns of Guarenas and Guatire in Miranda State on June 29. It consists of people in fancy dress and painted black faces processing through the community with music and carrying representations of Saint Peter. It was recognized by UNESCO as intangible cultural heritage in 2013.

(5) The Second Episcopal Conference of Latin America was held in Medellin, Colombia in 1968, in which bishops agreed to take “a preferential option for the poor” and work harder to sew Christian organizations in the communities through Church-run social programs. This effort eventually became known as Liberation Theology in the continent and caused Pope John-Paul II to appoint bishops in Latin America in the 1970’s with the specific profile necessary to defeat this initiative.

(6) The Venezuelan Episcopal Conference (CEV) is the institution that represents the Vatican in the country. All resident Archbishops, Bishops, Administrators and Vicars’ Apostolic Diocesan Administrators are members.

(7) Talks between the Chavista government and right wing opposition were held in Oslo, Norway, in May this year. After being suspended, they were resumed in Barbados in July, before government officials left the talks after a US general embargo was announced against Venezuela on August 5. Both sides have recently hinted that talks may resume shortly.