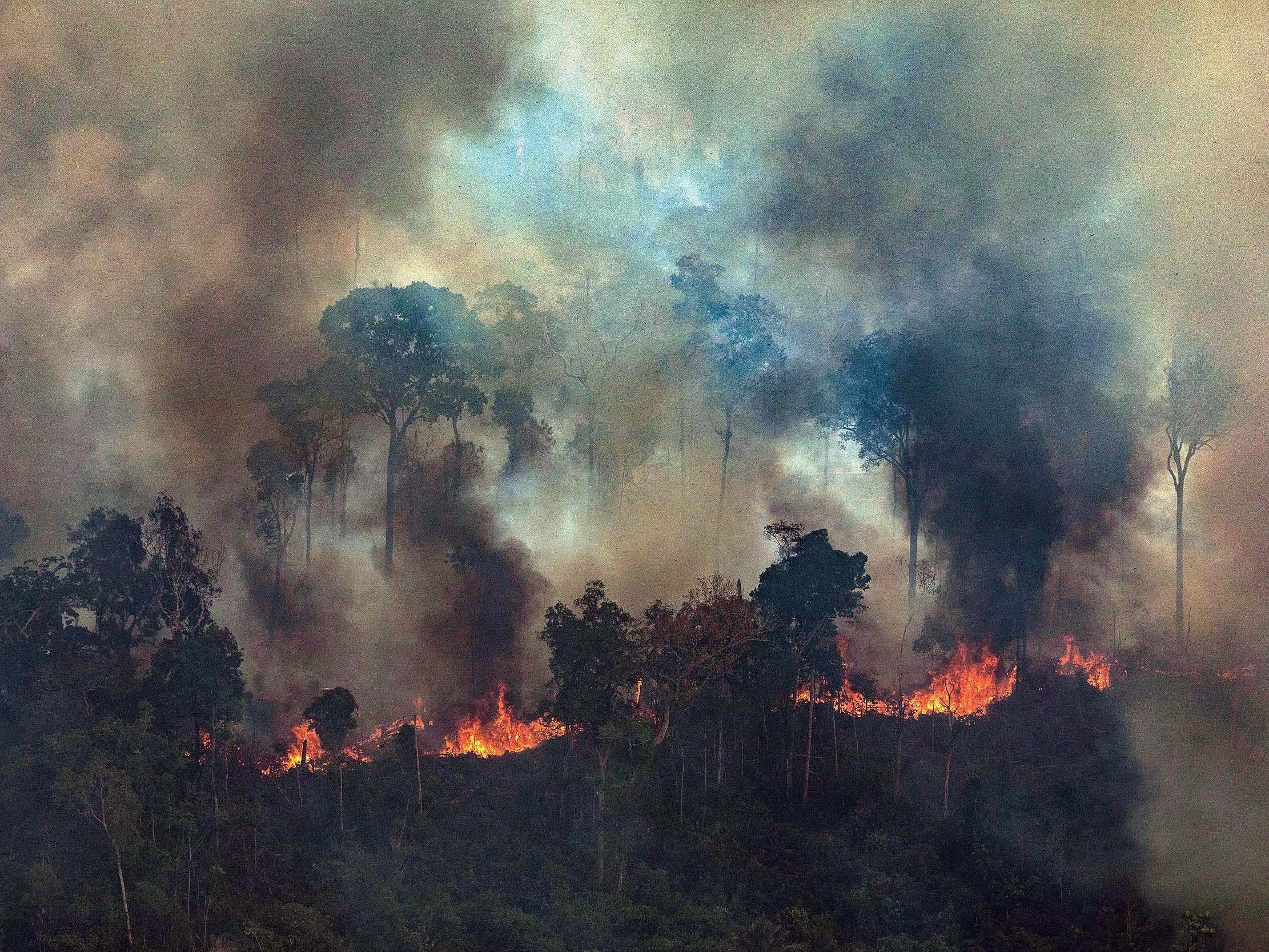 The voracious fire in the Amazon in Brazil that has been burning for more than two weeks was premeditated, since, according to researchers, there were simultaneous fires in different locations while President Jair Bolsonaro not only failed to take the necessary steps to control the situation, but also used this tragedy to accuse environmentalists, non-governmental organizations (NGOs) and especially to unleash his hatred against indigenous populations, which have been brutally attacked by the president, and threatened with “annihilation”.

Since he assumed power, he had declared his project to turn the Amazon into a great emporium of transnationals. The devastating fire is a high-level depredatory action, and as the experts point out: fires are always the product of human action, whether accidental or premeditated. No one is unaware of the ambitious plans elaborated by the hegemonic power to seize the Amazon, which appeared in study books of the United States, as a territory under its control, for the “preservation” of the environment.

In addition, the actions of many NGOs are also well-known, depending on various Foundations that use hegemonic power for their diverse forms of counterinsurgency wars against our countries, and which have invaded and silently spread throughout Latin America.

The fires are suspicious in these times, especially since the detention in Chile of the Israeli soldier Rotem Singer – supposedly the author of the fire in Torres del Paine National Park, a biosphere reserve in Chilean Patagonia in 2012 where the fire destroyed over 17,000 hectares. Singer reached an agreement to avoid trial by paying 10,000 dollars (about 7,530 euros) and assisting in a reforestation campaign. He signed up to work “as a volunteer for one to two years for the global NGO ‘Keren Kayemet LeIsrael’, a reforestation specialist with a delegation in Chile. The wolves taking care of the sheep.

The fires in Chile and Argentina have been investigated, but in general the information was withheld from the population, despite the determination that they had been started by sinister hands, which is environmental terrorism. In the case of Brazil, the excessive ambition of the large transnationals has been known for some time, one of whose models of depredation is Monsanto, which unfortunately has entered our territories through corruption and the various weapons of imperial power.

Bolsonaro’s claim that his country doesn’t have what it takes to deal with this situation is simply not believable: “The Amazon is bigger than Europe. How are they going to control the fires in this area?”, said Bolsonaro when he publicly confessed that the Ministry of Justice has insufficient personnel to investigate how the fires started.

Nevertheless, he maintained that these fires could have been caused by the opposition to his government and that many of the Non-Governmental Organizations (NGOs) had ceased to receive money from Germany and Norway and “because they are unemployed they want to defeat me”. Another of his hypothesis is that it could be “the farmers or the Indians,” and he also alluded to the cattle ranchers, who are part of elite right-wing groups that support him. Meanwhile, both his officials and the mass media have been silencing the tragedy, which is also another manifestation of environmental terrorism that makes them accomplices to this new crime against nature and thousands of native peoples, whose home is this immense and living jungle.

There are strong suspicions that Bolsonaro’s supposed indifference to the situation in the Amazon is part of his agenda to “cleanse” that region and “to annihilate” the indigenous communities – as well as the black population, the poor, the homosexuals, the communists, the list is long – and nothing is better than predatory and “purifying” fire. According to his “evangelical” precepts to meet his commitments, particularly to the rulers of the United States and Israel, Donald Trump and Benjamin Netanyahu, the latter the great guest of stature who has enormous power over the president of Brazil.

To accuse the indigenous inhabitants, whom he has been persecuting since he came to power, referring to them in insulting and racist terms from other centuries, is further evidence of his policy of spreading hatred that binds him closely to his closest and most powerful friends.

The original Amazonian peoples are the guardians of their lands and nature. Studies have even shown that they only take what they need from nature, which assures their existence and survival.

The speeches of indigenous women leaders in the Congress of Brazil have been forceful, desperate, and very clear about the threat that is coming against them by the entry of large mining companies and other plans that will end with the destruction of their lives and the lungs of the world.

The response of world leaders reveals the immense selfishness of their proposals, because they only speak of the damage this destruction causes to their countries, and at no time are they heard referring to the thousands of victims: living beings, men, animals, birds, which ensure biodiversity.

The silence was only broken by the pressure of the world and the reply of Bolsonaro, president of a world power, explaining that he does not have the means to tackle this, while the Bolivian president, Evo Morales, is setting an example of what it means to be a president who loves his people, his territory, his neighbours, and in response to the first fire in the Bolivian Amazon region, he immediately appointed a Crisis Committee, brought to work all the helicopters his country has, in addition to renting the largest plane in the world to put out the great fires, as the entire population stands in solidarity.

These are two responses that demonstrate the enormous differences between a person whose violent, xenophobic, racist and criminal discourse represents the regional ultra-right, the rampant, brutal capitalism of this century that attempts to devastate the continent under the imperial mandate, and that of the first indigenous leader who came to power in Bolivia, with a message of peace, of vindication of the rights of the peoples and of the indigenous rights violated for more than 500 years, and of profound care of nature, through the “Mother Earth”, teaching the world another way to humanity and nature.

A lawsuit filed in Brazil mentions Open Democracy, an organization that claims to have accessed “internal documents of the Bolsonaro government that demonstrate that the president is deploying a project to demolish conservation plans and advance the exploitation of the Amazon”.

The NGO referred to a series of slides showing that the Bolsonaro government uses hate speech to “diminish the power of minorities living in the region” and thereby develop “predatory projects that could have a devastating environmental impact on the Amazon”.

One of the government’s priorities is to occupy “the Amazon region to avoid the implementation of multilateral forest protection projects,” says Open Democracy, citing specifically the area referred to as “Triple A” (Andes, Amazon, Atlantic), which would be an ecological corridor with 135 million hectares of tropical forest that would connect the Andes with the Atlantic, passing through the Amazon. It is argued that the Brazilian president’s actions are designed to avoid conservation projects and the preservation of the green lung.

Although this is part of the dark undercurrent that moves in the direction of colonial ambitions to appropriate the Amazon, this region can only be cared for as it has been until now, by its legitimate inhabitants. Many authentic and dignified activists have been assassinated by that dark power of capitalist ambitions that destroy everything, and that, like Bolsonaro, publically declare their plan to wipe the indigenous communities off the map of Brazil. And behind all this, there is the publicized plan of the United States and its associates to appropriate the Amazon territories, as they are doing in places like Colombia, under the false argument that only they ensure the preservation of nature.

It is enough to remember the genocides and looting that have subjected our countries and Africa, where they turned orchards into deserts, to understand what this “aid” is really about.

An article published by Hispan TV recently warned about the great threat posed by the United States’ biological centers, which are being strategically established together with military bases, as in the case of Colombia, and the intention is to extend them with the complicity of the subjugated States and most of the media.

“These laboratories have to do with the control of the Amazon as one of the geopolitical projections of the Pentagon, for which Brazil and Colombia are two nerve centers in the realization of their interests”.

Thus, not only is everything mentioned behind the Amazon fires, which today “shocks” the world, there is much more to investigate what threatens the continent in this 21st century and which also demonstrates the vigour of multiple resistances.