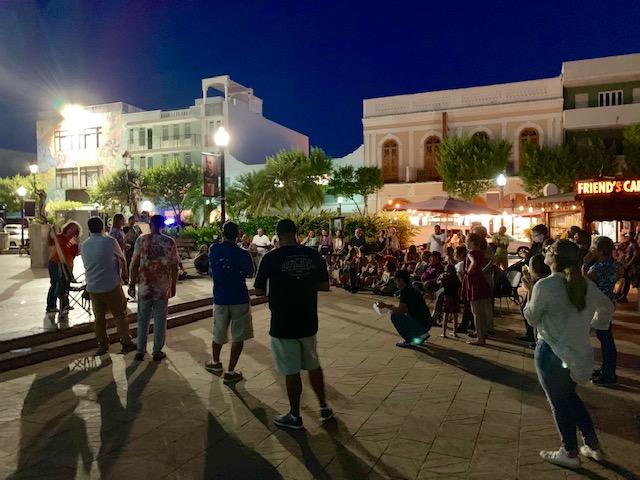 A microphone sat in the center of a crowd under some trees in Plaza Las Delicias in Ponce, the largest city on the southern coast of Puerto Rico. Some of the people present occupied the concrete benches in the outer perimeter of the circle around the microphone. Others had brought beach chairs or sat on the ground, and some stood along the edges, arms crossed, looking in. It was a little past six in the evening.

Veronica, a young woman from the University of Puerto Rico at Ponce, called the assembly to order and welcomed the crowd of some 80 people, noting that many had crossed paths during recent protests. “In the many conversations that emerged while the people of Puerto Rico took to the streets to request the resignation of Ricardo Roselló, we shared the same question: What will happen after Ricky resigns?” she said. “So, we met a few days ago to organize the proposal that we bring to you today: the people’s democratic assembly.” This was the first of many people’s assemblies, called by diverse groups across the island to discuss the next stage in Puerto Rico’s newly acquired experience in popular democracy.

The exercises of direct democracy that sprouted in the streets through massive protests—taking  from dance to motorcycle demonstrations, among others—led to the resignation on July 25th of governor Ricardo Roselló and crystallized for Puerto Ricans a consummation of popular power. The outcome confirmed that an organized group of citizens can exert enough pressure to force a detente on the state. Following Roselló’s resignation, however, many have expressed concerns about possible demobilization. Some fear that as people return to the routines of life, the fiery resistance struggles of July will gradually fade from our collective memory. Were the protests and marches the beginning and end of this political awakening? How far can this newly acquired power be taken?

Puerto Ricans now explore the breadth of these challenges with the formation of people’s assemblies. Assemblies began in August in different parts of the island, from Ponce, Mayaguez, Lares, and Utuado to Caguas, Gurabo, San Juan, and Carolina, as word spread with the help of hashtags such as #asambleadepueblo on social media. Different sectors of civil society have convened these assemblies with the mission of reflecting on how to provide continuity to the mobilized citizenry and entering into deep conversations about governance.

Other assemblies, such as those in Ponce and Lares, have opted for an open-meeting format where those interested in participating have anywhere between two to five minutes—depending on how many people are in attendance—to reflect on the current situation or to share their concerns and proposed solutions. In these, coordinators request that people sign up for a turn to speak, a sort of record-keeping to avoid that any one person dominate the discussion, while also holding everyone to preset time limits. Regardless of the model used, the assemblies share common principles of inclusivity, horizontality, and openness.

Organizers also make clear that this is not a space for political parties to push their political agendas, but for members of civil society as private individuals to present ideas and proposals for the achievement of transformative social change that emerges from the people. While many of the assemblies have participants with experience in assembly procedures—and the intricate parliamentary process—a significant number of participants are new to the scene, making for a space of innovation and experimentation within the democratic exercise.

Even though people’s assemblies have just begun—and in each town, there are concerns intrinsic to that community—it is already possible to observe the emergence of issues that dominate assembly discussions: intertwining socioeconomic and political concerns.

On the socioeconomic front, in an island where the mounting $124 billion debt and the implementation of austerity measures have exacerbated the struggles of working-class and poor people, assembly participants have reiterated many popular concerns that have been at the forefront of protests in recent years. Fresh on people’s minds is the current labor reform, which eliminated rights for newly hired workers and is widely seen as having especially negative consequences for the younger generation, who confront harsher job conditions and are discouraged to stay in the island. Many have also voiced concerns over the crumbling educational system and the impact of closing schools, not only for children but for entire communities. For example, at one of the assemblies, Roxana, a sociologist and community organizer, mentioned, “I am very worried about the educational system. We need to demand from the government what is going to happen with our schools. We cannot continue with schools closed in communities that have dire needs; it is not permissible.”

Another issue is the privatization of essential services such as healthcare and utilities, which has been at the forefront of the government’s economic agenda, often imposed through the Fiscal Control Board (FCB), which was established under the 2016 Puerto Rico Oversight, Management, and Economic Stability Act (PROMESA). Other pressing issues that have emerged in assembly discussions are related to diminishing pensions in light of the government’s inability to meet its obligations toward public employees and access to safe and affordable housing.

Strongly tied to the socioeconomic issues addressed above, assembly constituents have identified the FCB and the illegality of the national debt as one of the most pressing issues to challenge in the streets and town squares. More than reiterating the burden that austerity measures have represented, people at assemblies have made proposals to create citizen accountability boards to demand transparency from the FCB and politicians and force an audit of the national debt. Voluntary organizations such as the Frente Ciudadano por la Auditoría de la Deuda have assumed this task and pointed to the unconstitutionality of some of that debt, unfortunately to no avail from the FCB or the government of Puerto Rico.

Other political concerns include alternatives to traditional political parties and the resolution of the colonial situation of the island—themes that echo the protests in July. In the eyes of many assembly participants, the two-party system that dominates national politics—along with politicians’ corrupt behavior—have crippled the political process. Traditional political parties in general have failed the people and lost trust and legitimacy. Many have suggested setting in motion a constitutional assembly process to rewrite the current constitution, while others have emphasized the need to cultivate more active and engaged participatory politics among the citizenry. 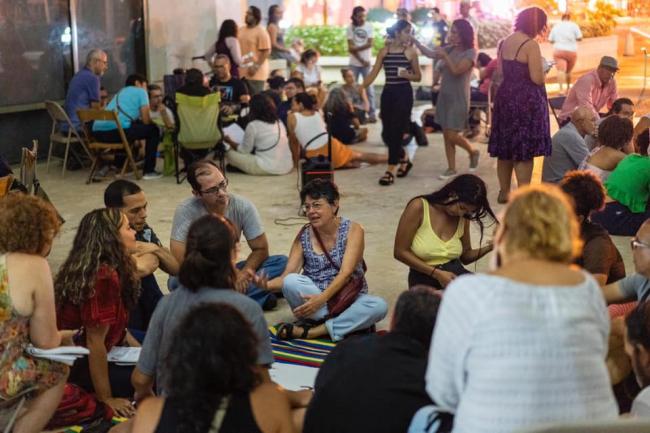 There is a consensus among many sectors at the assemblies that the colonial status of Puerto Rico is at the core of the whole situation. The debates over a resolution of U.S.-P.R relationship, be it annexation or secession, have permeated every aspect of political conversation in the island since the end of the Cuban-Spanish-American War in 1898. The current colonial status was further problematized a few years ago after the Supreme Court ruled that under the 1952 Constitution, Puerto Rico—as a territory of the United State—cannot claim autonomy , much less sovereignty. This decision broke the spell around the Estado Libre Asociado (commonwealth) as a sustainable and conclusive status for the island. Many at the assemblies have interpreted the massive street demonstrations as a rising of consciousness, an awareness of this colonial reality, and a readiness to move towards decolonization. However, given the divisive discussions around the status issue, the assemblies have approached these conversations with trepidation. Damaris, a participant at the assembly in Mayagüez, advised that “if we want to be inclusive of all sectors, we should be cautious in bringing the issue of colonialism; not everyone will share that view and will not engage—will not participate.” The unity achieved under #RickyRenuncia is seen as still fragile, and there is fear that ideological factions may undermine it.

In an effort to provide concrete steps toward solving these issues, assemblies are moving toward the creation of working groups that are tasked with thinking about and implementing action plans. In some towns, those present at the assemblies have proposed workshops that educate people on what constitutes participatory democracy and provide them with the necessary tools to broadly participate in the island’s decision-making processes. For instance, Josue at the assembly in Ponce said, “I think that the problem we are facing is that we have a state that does not represent us…We should aim to be part of the decision-making [process], and these assemblies should be a vehicle towards that aim.” Others are proposing the creation of a written resolution collecting people’s demands to be presented to the newly sworn governor. Furthermore, a consensus has been established regarding the implementation of a network of assemblies to work on shared agendas that can have more influence in the national political arena.

In recent years, the Puerto Rican community in the United States has gained traction as a political ally and resource to people and movements on the island, as evidenced by its mobilization against PROMESA and the outpouring of support after Hurricane Maria. This connection was further cemented by the number of demonstrations in solidarity calling for the resignation of Rosselló in July and the emergence of similar assemblies in cities like Pittsburgh and New York.

It is too soon to know whether this newly acquired power will lead to a radical change in the political structure of the island and, if so, what type of change. What is certain is that the sense of empowerment produced by people’s participation in the mass mobilizations has undoubtedly led to a political awakening. These assemblies suggest that people are beginning a process of appropriation and probing of participatory democracy and its vectors—that is, empowerment, self-management, and self-determination. The shift from street demonstrations to people’s assemblies suggests “the proposal behind the protest,” a principle that challenges those mobilized by grievances to construct their own solutions and present them as alternatives to the current state of affairs. This principle was evident in the groundwork of the Vieques Movement and the work of Casa Pueblo in Adjuntas. The rise of people’s assemblies across the island and their continuous call for the state to respect the people’s voice certainly demonstrates that we are looking at the maturation of a proyecto de país: a national project for a new governance.

Quoting the revolutionary figure Ramon Emeterio Betanches, Ramón Rodriguez posed a question at the assembly in Ponce: “Why are Puerto Ricans not rebelling?” The assembly responded: “We are here—our moment has come.”

Jacqueline Villarrubia-Mendoza is Associate Professor in the Sociology and Anthropology Department at Colgate University. Her research focuses on Latin American/Caribbean migration to the United States. Her work has been published in Latino Studies, Current Sociology, and the Journal of Migration and Integration, among others.

Roberto Vélez-Vélez is an associate professor of Sociology at SUNY New Paltz. His research has focused on the anti-military movement in Vieques, Puerto Rico, the intersections between memory, identity and politics, and US–Latin American political dynamics. His work has been published in Mobilization, Social Movements Studies and the American Journal of Cultural Sociology.

Both are currently collaborating on a National Science Foundation funded project related to the emergence of Centros de Apoyo Mutuo in the aftermath of hurricane María in Puerto Rico.