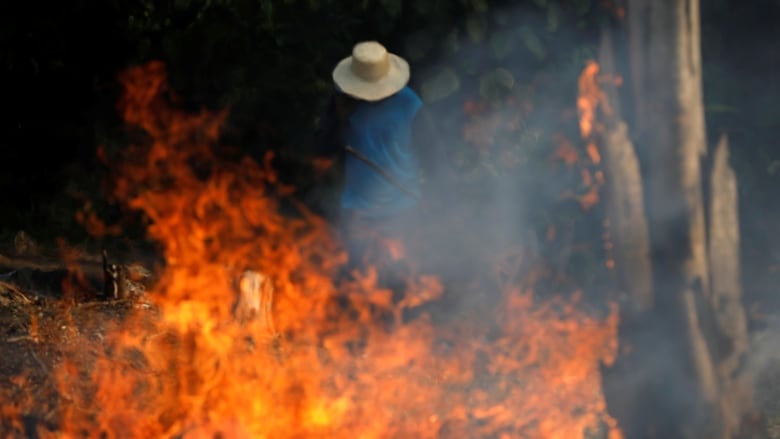 A man works in a burning tract of Amazon jungle as it is being cleared by loggers and farmers in Iranduba, Amazonas state, Brazil August 20, 2019. | Photo: Reuters

Brazil has experienced its highest number of fires in the past seven years, according to official government data.

Some 71,497 blazes have hit the country between January and mid-August, and half of these occurred in the protected and megadiverse area of the Amazon. The number of wildfires between Jan. 1 and Aug. 18 of this year is 83 percent higher than during the same time frame of 2018, according to the National Institute of Space Research (INPE), which keeps track of the nation’s fires via satellite images. The institute said it registered 38,228 in the Amazon alone, and 30 percent were located in the savannah areas that border the world’s largest rainforest.

Rondonia and Bolivia on fire. The red spots represent very high atmospheric carbon monoxide (CO) concentrations above 1200 ppb.CO is an indicator of burning in progress. The picture is from 4 pm this Sunday, August 18.

Nearly 11 percent of the major flames occurred across the nation’s Atlantic forest along the coast.

The spread of fires in the region has forced some Amazonian states, such as Amazonas and Acre, to declare an emergency or environmental alert because the smoke increases respiratory diseases and has affected air traffic.

The effects of the fires and flames even reach Sao Paulo, the nation’s largest city, earlier this week, creating premature darkening over the metropolis.

When asked about the spread of the fires, President Jair Bolsonaro dismissed criticism that he and his administration weren’t doing enough to prevent or control the flames. Bolsonaro told reporters this was the time of the year of the “queimada” or burns, when farmers use fire to clear land.

“I used to be called Captain Chainsaw. Now I am Nero, setting the Amazon aflame. But it is the season of the queimada,” he told journalists.

According to the INPE, the outbreaks of fire in the last week alone have affected 68 environmental or Indigenous reserves, mainly in the Amazon.

The Chapada dos Guimaraes National Park located in Mato Grosso has already lost 12 percent of its vegetation, while the vegetation cover in the Parque do Araguaia Indigenous Reserve, in the Amazon state of Tocantins, has been decimated by fire.

The non-governmental organization Institute of Environmental Research of the Amazon (Ipam) said deforestation is the subsequent man-made burning are the clear culprits.

“The number of heat sources registered in the Amazon is already 60% higher than in the last three years and that peak is related to deforestation and not to a stronger drought as some suppose,” denounced the organization.

“Drought does not explain the current fires, the return to deforestation … does. The fire is normally used (by settlers and landowners) to clean the land after deforestation” of an area, Ipam said in a statement.

According to the organization, fires caused by farmers and livestock breeders can get out of control. The right-wing president has received continual criticism for his attacks on environmental policies.

According to the Institute of Man and the Environment of the Amazon (Imazon), which has studied the region for 28 years, the deforestation rate in the Brazilian jungle grew by 66 percent last July, although that percentage is as high as 278, according to INPE projections.

The INPE director was later fired by Bolsonaro who called the data “lies.”

The new president is promoting mining and logging in the Amazon areas, saying by doing so he is “fulfilling a mission from God.”