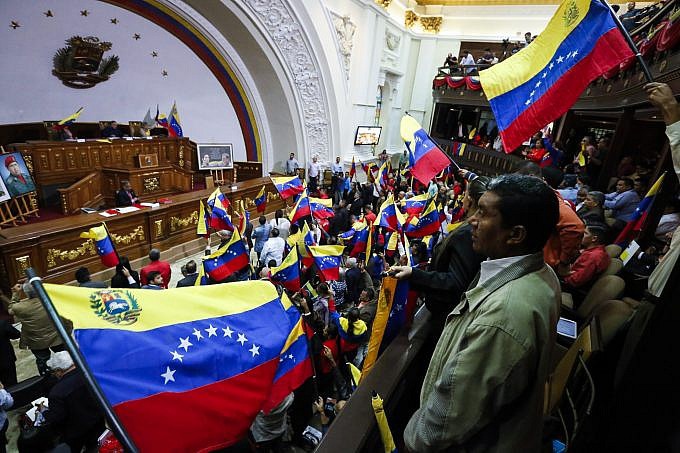 Additionally, Admiral Gilberto Pinto was tapped to lead the Ministry of Mining and National Guard General Raul Alfonso the Public Works Ministry. The final change saw the creation of a new Tourism and Foreign Trade Ministry, to be headed by Felix Plasencia.

Maduro has announced a “deep renovation” of his cabinet on several occasions in recent months. Nevertheless, prior to the latest reshuffle, only a handful of changes had taken place, including the replacement of Electricity Minister Luis Motta Dominguez following the March and April blackouts. However, key portfolios such as economy, finance, oil and the multiple vice presidencies have seen few changes since last year.

The cabinet changes followed a Supreme Court decision to lift the parliamentary immunity of three opposition lawmakers, paving the way for criminal prosecution.

According to a communique, Venezuela’s Attorney General Tarek William Saab requested that that the Supreme Court allow that National Assembly deputies Juan Pablo Garcia, Tomas Guanipa and Jose Guerra be investigated for “treason, conspiracy, incitement to insurrection, usurpation of functions,” among others. The accusations are covered by seven articles of the Venezuelan penal code.

Garcia, Guanipa and Guerra follow a host of opposition lawmakers that have seen their parliamentary immunity lifted since National Assembly President Juan Guaido proclaimed himself “interim president” on January 23.

The opposition has since launched several attempts to oust the Maduro government, including efforts to bring in “humanitarian aid” across a closed Venezuelan-Colombian border on February 23 and a failed military putsch on April 30. Several lawmakers had their immunity revoked for alleged involvement in these episodes, notably National Assembly Vice President Edgar Zambrano.

Venezuela’s plenipotentiary National Constituent Assembly (ANC) lauded the Supreme Court ruling in a session on Monday, with Deputy Dario Vivas claiming that there can be no impunity.

Monday’s session also saw the body approve a decree rejecting the embargo imposed by the Trump administration against the Caribbean nation.

The text rejects “renewed meddling” from Washington, reiterating that the country has a “democratic and constitutional path to secure the people’s well-being.”

Washington escalated its sanctions program into a full-scale embargo on August 5, freezing all Venezuelan state assets in US territory and enabling sweeping secondary sanctions against entities that deal with Caracas.

ANC President Diosdado Cabello likewise announced the creation of a commission to evaluate whether legislative elections should be brought forward.

According to the constitution, elections for the National Assembly should take place in 2020, with the body’s term due to expire in December. However, the legislative chamber has been in contempt of court since July 2016 when its opposition majority swore in three deputies under investigation for voter fraud. The standoff between the legislative and Chavista-held branches of government escalated in 2017 when the opposition took to the streets in violent protests, prompting Maduro to call for ANC elections under Article 348 of Venezuela’s constitution.

Maduro and other government officials have floated the possibility of early parliamentary elections on repeated occasions. Elections are reportedly one of the topics under discussion in the government-opposition talks taking place in Barbados with Norwegian mediation, but no details have been disclosed. The Venezuelan government called off the latest round of negotiations in the aftermath of the embargo imposed by the Trump administration.

Edited and with additional reporting by Lucas Koerner from Philadelphia.