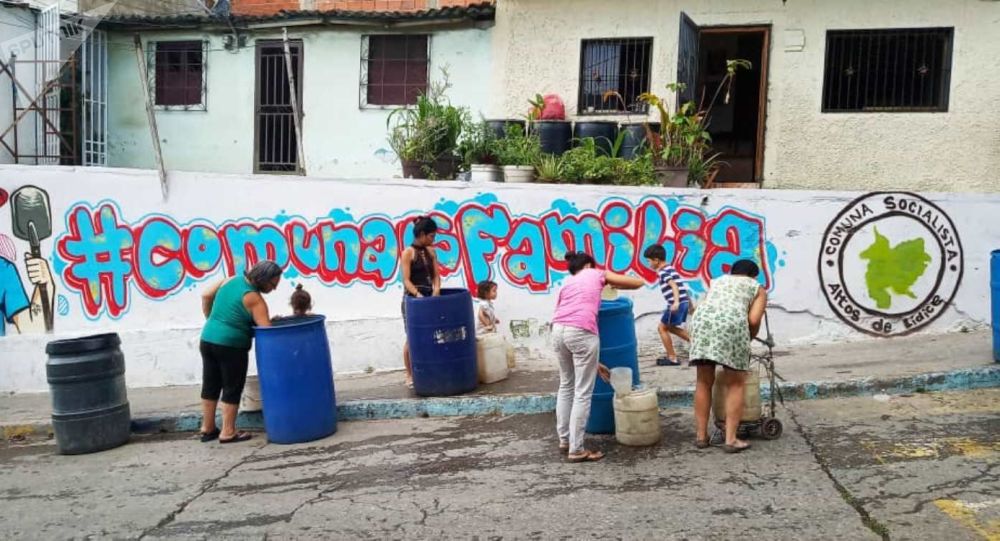 The blockade on the Venezuelan economy is not abstract: it strikes daily in the macroeconomy and popular neighbourhoods. There, in the hills where the humblest classes live, they debate to find ways to confront it.

Things will get more difficult. The U.S. government’s economic attacks on Venezuela announce that more problems will arise in an already difficult situation, particularly in the poor neighbourhoods. “Listen, until now, how the people endure, the strength, the resistance you have, is worthy of admiration,” says Rosiris Zapateiro, known as ‘La Portu’ in her neighbourhood of Altos de Lídice, Caracas.

Hold on. Like Juan Gelman’s poem: “learn to resist, neither to leave nor to stay, to resist”. It has been several years of shortage followed by hyperinflation, permeated by the deterioration of services, violent assaults from the right. Donald Trump’s signature of the embargo will bring greater difficulties. What to do? This is the question that the community leaders of the neighbourhood are asking themselves.

“In the last session of the parliament of the commune there was a discussion about this situation because many things are going to get worse,” explains Jesus Garcia, community member of Altos de Lídice. “If the problems increase, it is necessary to change methodologies, criteria, and work in greater unity”.

The leaders have a responsibility to the communities: “people expect something from you, we put our faces on this,” says Rosiris. There are many simultaneous fronts: prices, food, water, transportation, health, infrastructure.

We can’t wait for “the State to try to solve all the problems in the midst of the difficulties, as blocked there is less it can do, so we have to look for alternatives to move forward,” she adds.

The commune encompasses every front it can. It has constructed a socially owned services company to take care of public spaces, lighting, is in the process of running a bus to ensure mobility to the highest part of the neighbourhood, organizes youth activities such as sports championships and workshops to educate communal communicators. “We are in dynamics in almost every field,” explains Jesus.

They have prioritized strategic axes in their daily work. Food is one of them: “it should not be lacking either now or tomorrow,” says Jesus, and priority attention should be given to families with many children, single mothers, older people, with difficulty in getting out of their homes. 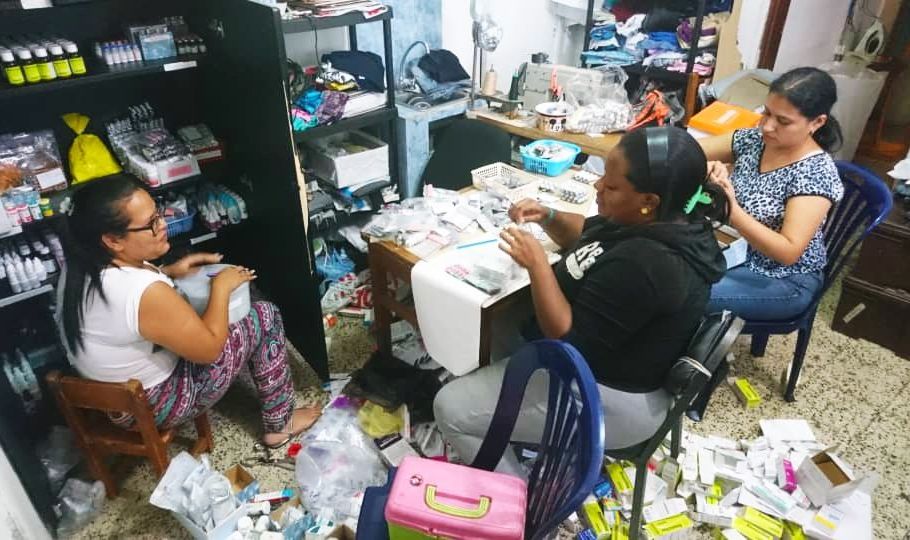 For this they work on three fronts: one of them is the communal markets that are regularly organized in different points of the commune, another is the house of food that works in coordination with the programs of the State, another the work with the Local Committees of Supply and Production (CLAP), and finally, a communal warehouse that is in process of opening: there they will sell food brought directly from the Commune El Maizal.

The inauguration of the winery is scheduled for late August. They will sell pork, meat, corn, cheese. At the moment there are discussions about costs, sales prices, surpluses, who will be in charge, how the comptrollership will be carried out, the sales circuits to distribute in the communal territory.

“I never wanted to profit from anything,” says Ingrid Lucero, who opened a space in her house for the winery to operate there. She was in charge of the Food Mission in her community from the beginning, when food was plentiful. The situation is now difficult, she lives on her pension, and her husband on a minimum wage.

Ingrid has one certainty: “I am still more Chavista than ever, I belong to an ideal and I know that the difficulties, the good, the bad, will always happen, and more when you have the U.S. power against you”. You put yourself at the forefront, to provide the necessary answers.

Another central axis of the commune is health. They have created a communal system that includes the refurbishment of clinics in the Barrio Adentro Mission, personalized attention to those who cannot leave their homes, and the recent opening of a communal pharmacy. The medicines are the product of solidarity donations gathered in Chile, administered by the community system of Altos de Lídice.

The pharmacy currently provides about 250 treatments per month, has its own system of control and distribution. “If you saw the joy when we bring the medicine to the people, it is gratitude,” says Rosiris.

The neighbourhood never stops. One of the problems is the arrival of water. At the top of Altos de Lídice they receive one or two cisterns a week, the neighbours come out with large tanks to fill them and then transport them in smaller containers.

The neighbourhood never stops. One of the problems is the arrival of water. At the top of Altos de Lídice they receive one or two cisterns a week, the neighbours come out with large tanks to fill them and then transport them in smaller containers to their homes. 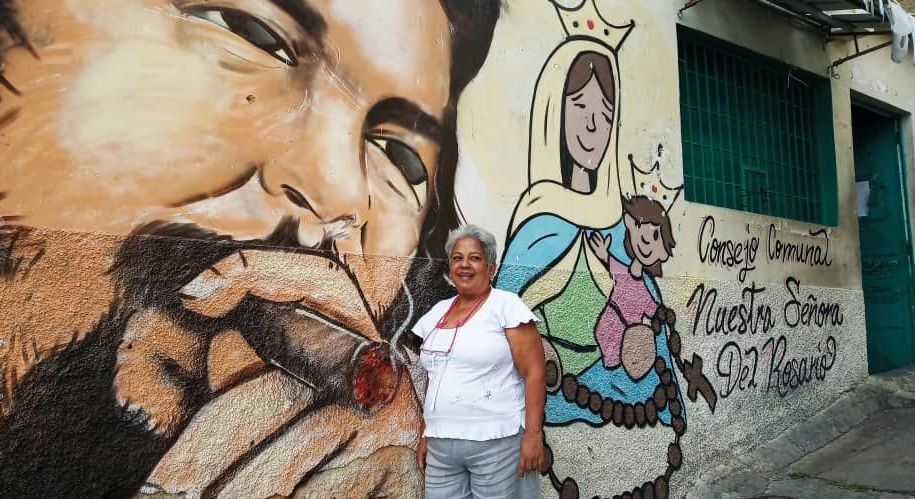 Jesus and Rosiris agree on one point: “the boundary is the CLAP boxes, that is the thin red line”. It’s hard to endure without the CLAPS, they say. A box of 19 food products costs half as much as a single kilo of corn flour in the street. When the boxes are delayed, the tension grows, prompting messages to indicate when they will arrive.

That is why the U.S. attacks seek to break the import circuits with attacks on companies, ships, payment systems. The CLAPs are to the neighbourhood what oil is to the national economy: vital. 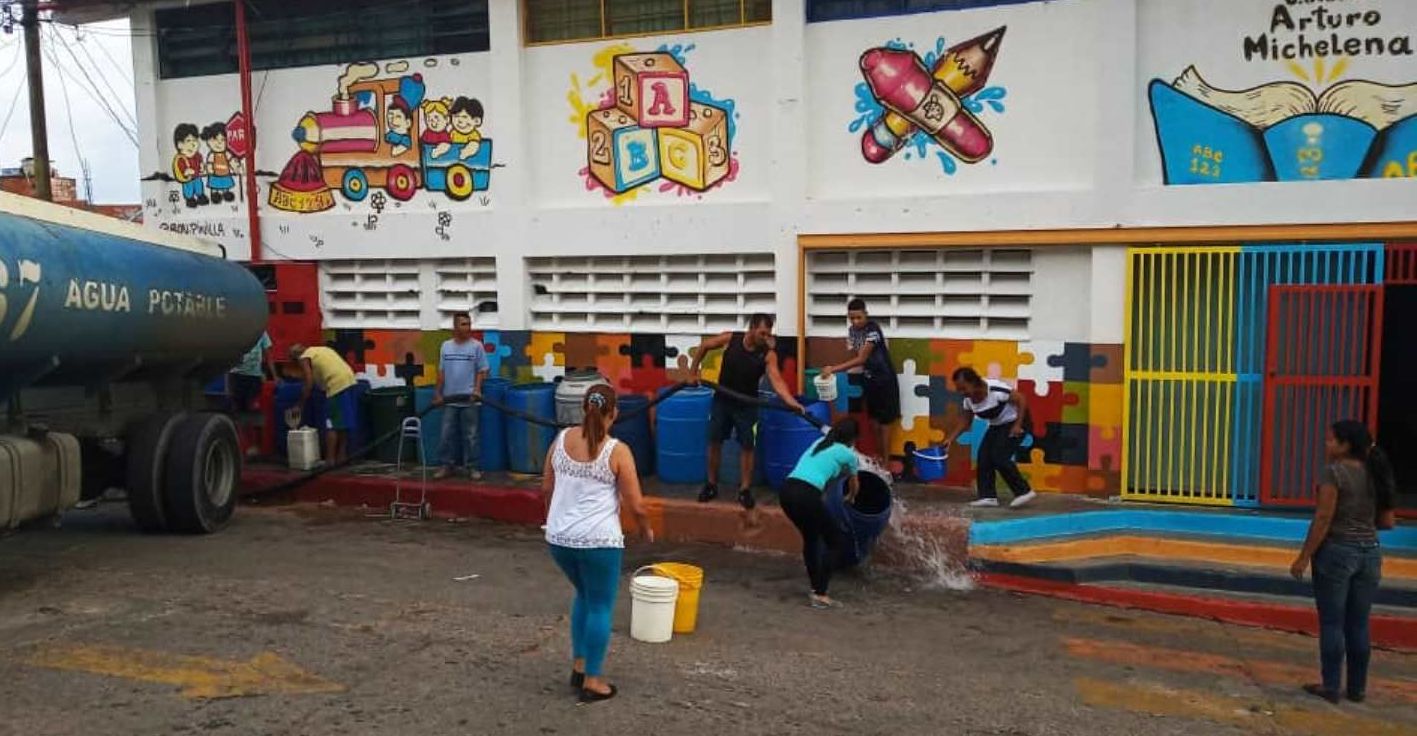 That is how vital popular organization is in the community. “Otherwise it would be total chaos, people feel they have an entity here in the neighbourhood, in the CLAP, the commune, to go to discuss their problems, somewhere to go, who will listen to them, who will not suddenly solve them immediately, but will do the diligence,” explains Ingrid.

“Without the leaderships, the organization, and in the midst of a situation like this, we would each be saved by his own,” adds Jesus.

It is a daily, permanent battle, where needs increase, so does the pressure to develop responses. “The commune is a practical instrument for the community to organize itself and to be able to solve problems in any situation, especially and even more so in one such as this. The commune must use its own strength to solve the problems while at the same time coordinating with the government, the institutions and the political leadership.

Leaders must respond to their communities. They, in turn, ask the government for answers, “coherence,” as Jesus says. “The government wants to make people understand that they are in the middle of a war, and that the problems experienced in the communities, in the country, are not the cause of inefficiency, or bureaucracy or ailment of the State, but are part of the blockade of the war, but when there are actions that contradict logic people think otherwise,” he explains.

The role of leadership is central in times of crisis. “What the people demand is that their leaderships are at the height of the political moment, and not based on speeches and great ceremonies, and that they really must wear their espadrilles because the people have worn them for a long time and have been performing the hardest and most vigorous dance for a while”.

The process of attrition and assault conducted from the United States can be confronted. It has been demonstrated by the reaction in the slums during these years, the capacity to resist, to look for ways to solve a pressing problem in a country that has lost more than half of its GDP in six years. More difficulties will come, the blockade seeks to make the asphyxiation so great that the country, the neighbourhoods, the subjects are broken.

“The blockade also has an emotional impact, but we are one of those who believe that the nation is sovereign, and that to give up means not only betraying Chávez but also betraying ourselves, those of us who believe and stay in this country, understand that we have to look for ways, methods and alternatives to move forward,” says Jesus.