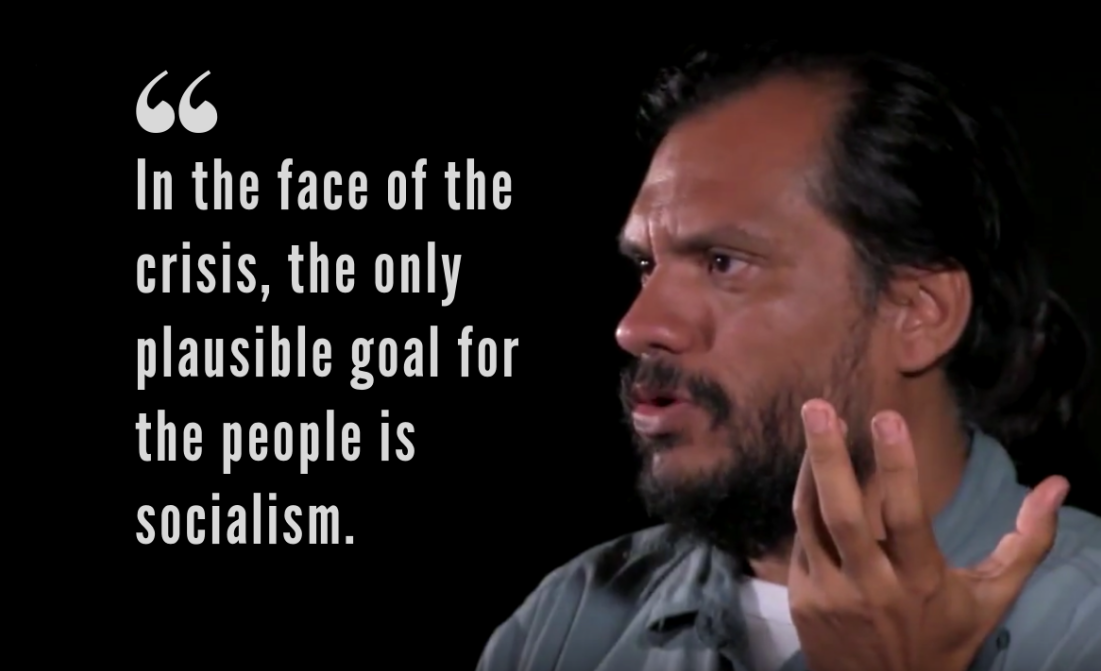 Gerardo Rojas is a Barquisimeto‐based organizer, intellectual and blogger. His work as an organizer began in the early 1990s, when he was in middle school. Later in that decade, Rojas participated in the occupation of a building in the barrio where he was born, which became a community center and later, in 1998, the first community radio in Venezuela. Rojas was one of the founders of Voces Urgentes in 2002, a communication collective, and participated in the organization of one of the first urban communes, Ataroa Socialist Commune, in 2007. More recently, he was vice minister at the Ministry of Communes.

In part one of this interview with Gerardo Rojas, we talked about the government’s rightward turn and the resilience of grassroots Chavismo. Part two looks at the struggle to unify Chavista resistance and the need for international support.

In the first part of the interview, we talked about the “strike at the helm” to the right that is going on: a shift in governmental policy that favors the private over the popular. Also, the government increasingly criminalizes those who struggle for their rights and it economically suffocates communal initiatives while continuing to subsidize capitalist production with the state’s limited resources. However, it is also evident that a combative, popular Chavismo is reemerging and becoming more visible.

First, we should make something clear: the Bolivarian Revolution never proposed ending private enterprise. Nevertheless, since the early days of the revolution – and even more so in Chavez’s last years – he wagered on a democratic transformation of the pueblo’s economic rights. So there was development of the private sector, a development of state property, but also, and most importantly, there was support for social or communal property.

This becomes clear in Chavez’s Strike at the Helm speech [2012] and in other speeches, where he said that we should move towards a society with a hegemony of social property. However, in the past few years, things have been reoriented towards private property, private entrepreneurship, and foreign investment, and the social project has been sidelined.

Interestingly, there is now a confluence of interests between powerful sectors of the government (that place their bets on the private) and the traditional Right. The discourse goes as follows: state and social property are inefficient, they are essentially corrupt, and they have caused the current economic disaster.

Of course, the managing of certain state enterprises has been flawed, but when you look closely, you can see that the problem was that the management model was undefined. It was blurry and didn’t coincide with the initial proposal of participatory democracy. In our experience, state property is not necessarily inefficient whereas social property is generally efficient. It is unacceptable that the government repeats banalities about state property’s inefficiency, making the Right’s arguments its own, to go against what is commonly owned.

Talking about this with some compañeros recently, we were saying that the government mirrors the opposition. The discourses are close, the proposals are similar, and they both go against popular power and integral democracy, placing their bets on the private. The project of social property has passed into the background, if not eliminated outright from the government’s worldview.

This situation provokes a response: the potent subject that was born with the revolution rises up. The Chavista subject is a powerful one, with clear ideas and practices that are coherent with its ideas (of course, with many limitations too, such as the inability to build projects that go beyond their immediate territories). However, the Chavista subject has a common project and objectives that can bring it together for mobilization and action on a national level.

Despite our weaknesses and limitations, there is a shared political culture. It is a historical legacy that is very important. Furthermore, this Chavista grassroots subject can claim real achievements that are expressed in the Homeland Plan [2012] and in the proposals at the core of the revolution. It is a subject that defends the few means of production that we have, but also, more importantly, as some sectors of the government (including the so-called “revolutionary bourgeoisie”) turn against the revolution, it defends the project.

Now we need to defend pure and simple Chavismo: the Chavismo that holds dear Chavez’s ideas, from The Blue Book [short book written in 1992 by Hugo Chavez, in which he presents his views on history and democracy] to Strike at the Helm. In that whole legacy, we can find the collectively‐built Chavista project.

The hegemonic sectors of the government don’t hesitate to criminalize campesino protests. In the meantime, they meet with the representatives of Juan Guaido, who is truly a criminal, in Oslo and Barbados. What do you think about that?

There is an evident process of criminalization of popular struggles, at a time when there are beginning to be contradictions between grassroots Chavismo and the government. Just a few days ago, the son of President Nicolas Maduro, who is a public figure, made a clear attempt to criminalize the campesino struggle. He spoke in defense of the sectors of the bureaucracy that promote the thesis of the “revolutionary bourgeoisie.” He criminalized campesinos, calling them “mafiosos.” Go figure!

In this difficult conjuncture and with the negotiations that are underway with the opposition, we hope that peace will prevail and war will be avoided. An all-out war would not only be catastrophic, it would also interrupt the possibility of Chavismo coming together to defend our project from within.

This process [of defense from within] is taking shape right now, although we cannot be sure that it will come together in the end. It is happening even as we speak, driven by those of us who have real projects at a territorial level. We are all going to defend what we have. We will defend it in any way possible – one hopes without a war.

The task is enormous. It means bringing together all those who are defending the Bolivarian Revolution from the bases and with the communes. It means bringing together campesinos, factory workers, and women – all joining forces with organizational ambitions that go beyond territorial self‐government. The coming together will demonstrate concretely that there is a way of doing politics that is different, that is a defense of the Bolivarian Revolution and that maintains the pueblo at the center of its efforts.

It is not a question of choosing between one or another sector of the bourgeoisie, the new or old. They, as a class, are our historical enemies, with the new sectors of the bourgeoisie clearly carrying out accumulation by dispossession through privatizations of the public (which are more or less direct thefts). It is being done with opacity regarding how the transfer of assets is carried out.

We are talking about the silent transfer of means of production that cost the Bolivarian Revolution billions of dollars to the private sphere. Much of this is now being transferred to the private sector using the justification that we are facing a difficult crisis. The hegemonic sector of the government believes this alteration of the project will make them the “saviors” of the country, although they have been at it for years and there is no evidence that we might be coming out of the crisis in the near future.

To the right, instagram message by the president’s son, Nicolas Maduro Guerra, which talks about “campesino mafias. To the right, six campesinos are arrested in Bolivar state in the month of July. (Archive)

All this brings us to a complex issue: the role of international solidarity with the Bolivarian Process at the time when, on the one hand, imperialist aggression is more intense than ever before, but on the other hand Chavismo’s internal contradictions are growing. How should people around the world undertake the double task of opposing imperialist interference, but also making popular power visible and defending Chavez’s legacy?

We often say “solidarity is the kindness of the pueblos,” and one of the things that characterizes the Bolivarian Revolution is people’s diplomacy. Beyond the powerful and important state diplomacy which has been exercised during the revolution – particularly during Chavez’s life, who had a clear plan to defend global multipolarity and continental integration – we should remember that this revolution provides a space for the world’s peoples to meet, debate, and build true links of solidarity.

People have come here to Venezuela, and other people traveled abroad to learn from experiences abroad. That is the basis for a true, people‐to‐people solidarity, a solidarity that should visibilize the Chavista subject (contradictions with the government notwithstanding). After all, this is a project that has had its limitations, advances and setbacks, but the ideas of transformation that it is based on are not particular to Venezuela but belong to the entire world.

This is a project that proposes an alternative at a time when political processes are in serious crisis compounded by the ecological and social crisis. The global context is marked by an obvious struggle to lead a new industrial revolution, the fourth according to some. In the face of all this, we say that there are other ways to do things.

To get people mobilized internationally, we must share our experiences with them: the communal initiatives, the popular organization to resist attacks and blockades, the internal incoherences, and the political violence coming from certain sectors of the opposition. On top of that there is the criminal interventionism of the United States, the European Union, their puppets, and the international institutions.

Here we have tangible experiences that connect us with the struggles of all the world’s peoples. The crisis that we are living through here is linked with the global crisis. Just as we, as Chavistas, must get together, organize, systematize what we have learned, and project our tangible grassroots experiences at a national level, so we also need to have policies that apply at an international level.

It is now more than ever that the pueblo needs active solidarity and mobilization in favor of the idea and practice of self‐government, affirming  that in the face of the crisis, the only plausible goal for the people is socialism. We need solidarity to push forward the core of the Chavista project. With this in mind, we have to organize, build, and unite.

The peoples of the South, the peoples of Latin America, are experiencing enormous political setbacks, with some governments that are almost fascist and others that are neoliberal. We have to organize internationally so that these governments are not able to construct a rightwing hegemony at a continental level.

We are in a process struggling over what people take for granted, what passes for common sense. There is no doubt that we have been weakened and are in a phase of resistance, but we need to begin to advance. We have to work together to build cultural hegemony, bringing forth the key ideas and concepts that will allow the pueblo to rise up and go forward. That we cannot do just from Venezuela. Two-way solidarity is necessary.

Finally, we can say that solidarity expresses itself in different ways, from the medicines that get here from Chile or from Italy in the communal health system in Altos de Lidice Commune, to the Basque Country campaign which is collecting seeds for El Maizal Commune as we speak. There are diverse kinds of solidarity on different scales.

All this is about solidarity with the Chavista pueblo and its project, but also about the solidarity with a project that works to guarantee human life. As Chavez said, what is at risk today is no more and no less than human life on earth, and that implies the need for much theoretical reflexion, but also an active practice that will bring together the people of all nations in defense of life itself.