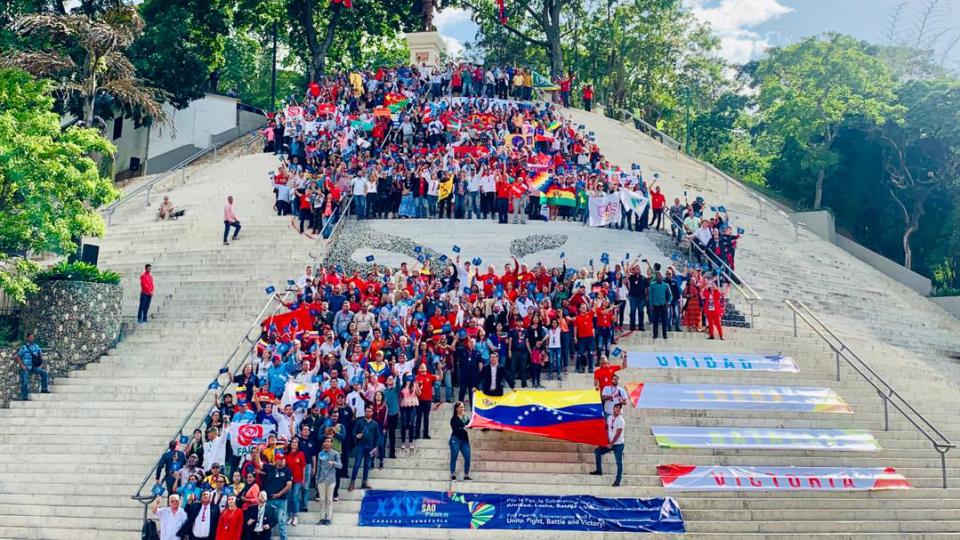 One of the axes of the Forum was the characterization of the “multifaceted reactionary offensive of U.S. imperialism and the allied oligarchic right” underway on the continent.

At midnight on Saturday, fireworks, explosions and gunfire rang out in western Caracas. It is customary now, it is one of the ways in which the neighbourhoods celebrate the day Hugo Chávez was born. He would have been 65 years old. It was heard in the hills, downtown, and by the international guests who attended the Sao Paulo Forum held Thursday through Sunday in the Venezuelan capital.

There were 190 organizations, including political parties, social movements, workers’ organizations, intellectuals, artists, MEPs, personalities such as the descendants of Nelson Mandela, Salvador Allende, and the president of Cuba, Miguel Diaz Canel. The meeting was harshly attacked by the continental right from before its realization for one principal reason: its realization in Venezuela and the consequent support to the political process led by Nicolás Maduro.

The last meeting of the Forum had been the previous year in Havana, the place where the political genesis of the space that has remained standing for 25 years. The initiative to build the Sao Paulo Forum came from the will of two key men: Fidel Castro and Lula da Silva. It was the time when the Soviet Union fell, the neoliberal creep, the loss of left-wing points of reference and progressivism, the emergence of new political experiences and electoral trials.

The agenda of the Caracas Forum was defined by several central axes. One of them was the characterization of the “multifaceted reactionary offensive of U.S. imperialism and the allied oligarchic right” underway on the continent. Within this context, central points were debated, such as, the persecution of popular leaders through the judiciary in alliance with the hegemonic media. The slogan “Free Lula” was repeated each day.

A central point of what was discussed during the meeting was the need to strengthen the unity between leftist and progressive forces in order to confront this advance, with common agenda topics, such as the demand for the end of the blockade against Cuba and the assassination of social and human rights leaders in Colombia.

Part of the debate and the conclusions addressed the next electoral scenarios that will take place in the month of October in Argentina, Uruguay and Bolivia. The support for the candidatures of Alberto Fernández-Cristina Fernández, Daniel Martínez-Graciela Villar, and Evo Morales-Álvaro García Linera was submitted in writing.

During the days of the Forum, there were events illustrative of the current situation on the continent, such as the resignation of the governor of Puerto Rico, new sanctions by the United States against the Venezuelan economy to block food import channels, as well as a mobilization in Colombia against the systematic murders of leaders that have occurred in recent years.

The closing ceremony took place after a tour of the Mountain Barracks, in the 23 de Enero neighbourhood, where the remains of Hugo Chávez rest. Present at the closing were presidents Maduro, Díaz-Canel, the president of the National Constituent Assembly, Diosdado Cabello, and Mónica Valente, of the Workers’ Party of Brazil, representative of the Forum.

Once again, support for the Venezuelan government as legitimately elected on May 20, 2018, for the project of the Bolivarian revolution, the rejection of the unilateral U.S. policy of aggression, as well as the need for dialogue to achieve a peaceful and agreed solution to the conflict, were emphasized.

In this manner, Caracas once again hosted an international event that expressed its support for Maduro. The previous one had taken place a few days before with the meeting of the Movement of Non-Aligned Countries, where 120 governments also expressed their recognition of the elected authorities, and not Juan Guaidó’s fictional construction in the country, albeit diplomatically real.

The end of the Forum thus provides the necessary support in times of uncertainty and assault. In the last few days, there has been a halt to the Barbados dialogue between the government and the opposition. Messages from spokespersons for the Donald Trump administration have been supportive of Guaidó as well as threatening, as Claver-Carone, the White House head of Latin America, said Maduro had a “short term ” for a departure from power.

Everyday life in Venezuela, meanwhile, continues its course amidst material difficulties, trench resistance, and episodes that speak of growing subterranean violence in border and nearby areas, such as the one that occurred on Saturday, with the murder of six Chavista militants in the state of Barinas at the hands of paramilitaries.