Alba Carosio is a longtime feminist writer and activist, and a member of La Araña Feminista [Venezuelan feminist network]. She is the Director of the “Revista Venezolana de Estudios de la Mujer” [a feminist academic journal], a researcher at the Centro de Estudios Latinoamericanos Romulo Gallegos and part of the “Latin American and Caribbean Feminisms” CLACSO workgroup.

In this exclusive interview, we talk to her about the global crisis of care and its unique characteristics in Venezuela.

I would say that the reproduction of life is in a critical situation globally. In fact, in the richest countries, there is a direct reproductive crisis due to a set of related phenomena: the disappearance of the classical patriarchal extended family, the decline of the welfare state, and the population’s aging. The extended patriarchal family put the burden of care for its vulnerable members (babies, the elderly, and the sick) on women, whom the standard gender mandate identifies as universal caretakers. Extended families, with several generations of women, fulfilled the function of social security. In turn, the parents’ rearing of many sons and daughters was their old-age insurance.

Contemporary families are much smaller, often containing only one generation, and they have been reshaped to include women who are now responsible for generating income, having jobs that demand time and commitment. The state, in turn, is meant to be as small as possible, and it offers little in the way of collective care (few institutions offering enough childcare hours, still less for the elderly, and virtually none for the chronically ill or people with severe disabilities). In wealthy countries, the care work is transferred – as a solution – to immigrant female labor. In fact, this is the reason why migration has become feminized. In the poorest social sectors, the problems aren’t solved, and this leads to restricted care or neglect.

In Venezuela the care situation corresponds to this global pattern but has been exacerbated by a crisis of services and the emigration of young people of productive age. Obviously, caring becomes much more difficult when services such as electricity, water, cooking fuel and transport are precarious and, on top of it, people’s spending power is hugely reduced. All this is made worse by the emigration of young and healthy family members, which makes it common for the sick and aging to find themselves in difficult situations, and for girls and boys to be in the care of their grandmothers.

The number of hours that Venezuelan women are devoting to the basic reproduction of daily life has increased by more than 50% during the crisis, with a big impact on their own health and wellbeing. Venezuelan women have always been heroic, but now they are surely the heroines of daily life. The responsibility for sustaining their families’ lives falls to them, but recently, on top of that, women have been shouldered with the responsibility of sustaining the life of their communities.

Venezuelan women are the ones who, almost exclusively, take on the unremunerated distribution of CLAP food boxes; they are the ones who get water for their community; the ones who take care of the administrative process to get cooking gas and who report failures of services to UNAMUJER [institution addressing women’s issues]; the ones who go from health center to health center, from pharmacy to pharmacy trying to get medicine, etc. All this means more and more hours of work and effort. 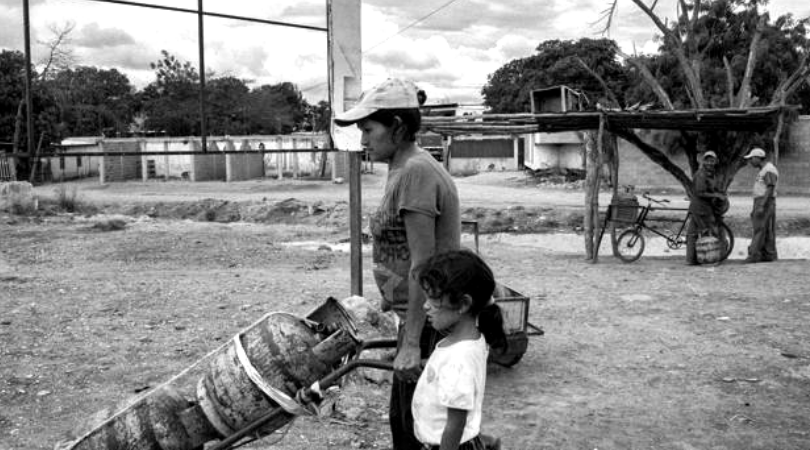 A Venezuelan mother and her daughter carry a gas cylinder. (Archive)

The financial sanctions that the United States imposed on Venezuela in August 2017 exacerbated an already-existing crisis. What is the impact of these sanctions on social reproduction and the work of caring for families?

US sanctions have aggravated an already difficult situation. Since the electricity blackouts [which happened in March, and were largely due to sabotage], and despite the good intentions of the state Electrical Corporation, there has been electricity rationing in much of the country. These problems persist because of lack of funds to buy the supplies – now more costly because of the blockade – that are needed to strengthen the electrical system. As I mentioned earlier, power outages have a direct impact on caring and social reproduction. The same goes for problems with water, transportation, cooking gas, etc. All this leads to there being less time and fewer resources to care for people. As a consequence, Venezuelan women try to make up for the deteriorating situation with more work and effort.

For example, in this moment of history, food preparation has become much more traditional. It often goes from the grinding of corn (which is done in many homes), to making homemade breads, cookies, and cheese, along with other food strategies. A whole set of “alternative” recipes have emerged – no doubt much healthier than the processed foods bought in supermarkets – but they require much more work for the women involved. It’s fair to say that things happen this way because men are either absent from homes or have not become aware of what co-responsibility implies.

There seems to be something machista or at least one-sided in the government’s discourse which focuses on creating a “productive country.” Given the very dire situation we are now in, shouldn’t the goal be a more holistic one that encompasses human life itself and the environment? In other words, isn’t the problem really about producing life rather than producing commodities and profits?

I would say that the project of building a productive country is necessary but not sufficient, and here it is even a bit utopian for several reasons.

The “productive country” project is not enough, because simply producing more will not improve the lives of working people, if we do not have a comprehensive approach to taking care of life, and that includes implementing a new system to sustain life and care for it (focused first on those who are most vulnerable). Additionally, all this must happen in environmentally sustainable conditions.

On the other hand, in situations such as ours, where so much time is dedicated to resolving problems of everyday life – with all the hours spent on figuring out transportation, water collection, getting fuel for cooking and looking for food, to say nothing of the time wasted due to blackouts – it is very difficult to increase production. We must acknowledge that time and human energy are finite, and it must be cared for. Human energy must be taken care of and sustained. It is not possible to produce without giving care.

Taking into account the perspective of women would be very useful for restructuring production and social life. 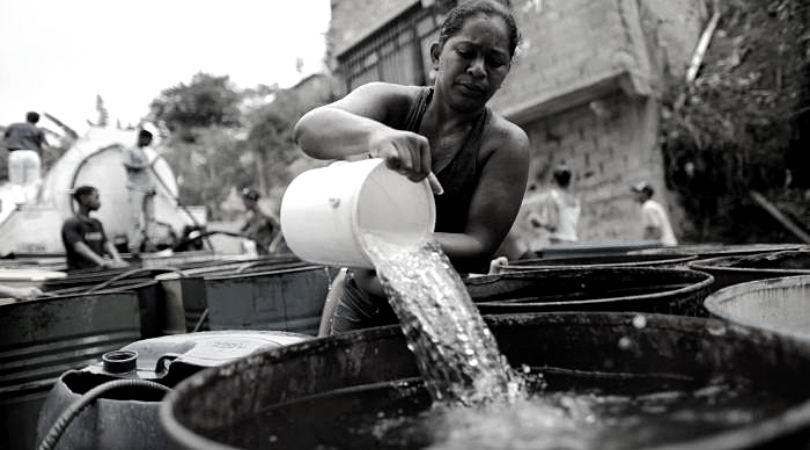 There is a great deal of discussion about how the Bolivarian Process has incorporated women into political life. Certainly, women have been more involved in politics during the last twenty years. In the barrios, they take on the task of organizing the communal councils and the CLAP. However, the “Desde nosotras” report suggests that the issue is not as simple as it might seem. It turns out that the percentage of men in government positions (ministers, vice-ministers, governors, mayors, deputies, etc.) is much higher. We could say that women’s participation in political life tends to be relegated to tasks closer to home, and even there women take on responsibilities that are an extension of family care.

Indeed, the political participation of women ends up supporting and being functional to patriarchal patterns of politics. National decisions continue to be most often in the hands of men, and women remain involved in the community and local politics. In other words, it is understood that women participate to solve specific problems – such as the distribution of the CLAP boxes – and men formulate the strategies and decide the overall direction that will be followed by everybody. Women participate politically as an extension of their role as family caregivers, or as support for male leaders.

Venezuelan politics continues to have a patriarchal character, treating women as great universal mothers. I think there is still a long way to go before Venezuelan women are seen differently. For example, among the state governors, only three women were chosen [as candidates] in the last elections. Women who are leaders at the local level are recognized only within those narrow contexts. It is very difficult for women to escape those confines and operate in more general, national spheres [of power]. It seems as if there is a need for women to stay at the local level because someone has to do the hard daily work that political action means at the barrio level. They are called to do the work at the local level, but end up being supervised by men who are usually the ones giving the orders and are at the limelight. 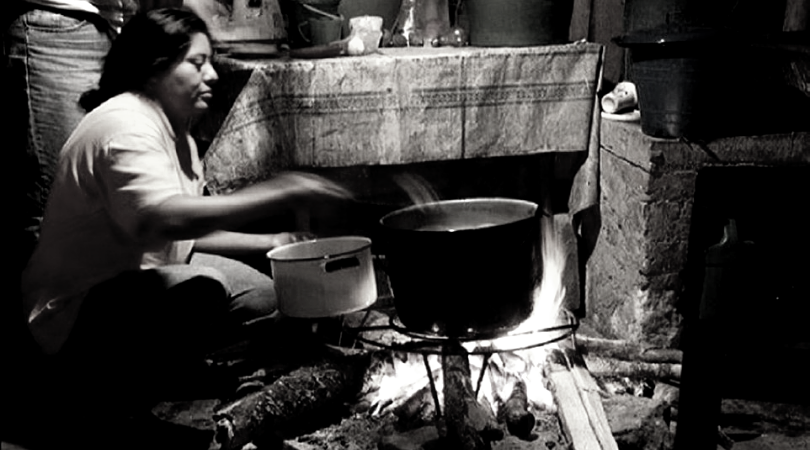 Cooking with wood has become common in much of Venezuela in recent months. (Archive)

With regard to the reproduction of life in a patriarchal society like ours, I want to mention two legal matters that are relevant to feminist struggles in Venezuela. The first is positive: Article 88 of the Constitution recognizes housework as a job, implying the right to social security (although we must note that this article also links housework to women by referring to “housewives”). The other is negative: Venezuela has a legal framework that penalizes abortion. In that sense, it is one of the most regressive legal codes in the continent. How do you reconcile these two aspects?

These are two struggles that have been real battles in the Bolivarian revolutionary process.

With regard to making good on Article 88 of the Constitution, there have been some attempts to do so. These include Mision Madres del Barrio [a project that focused on economic support for barrio mothers] and the Mision Amor Mayor [a project giving funds to senior citizens who never contributed to social security], which undoubtedly benefits women who had informal jobs or were exclusively housewives, but there is no specific recognition of the activity of care in homes.

Nor are their programs based on “co-responsibility” among families, men and women, and the state. Moreover, public policymakers haven’t the faintest idea of ​​co-responsibility in this sphere. Even the feminist movement has worked too little on this issue, not pushing enough for it. During the debates on the current Organic Labor Law, there was discussion of caring and the status of care workers, that is, extending the idea of work beyond those tasks that are remunerated. We were not able to get this into the law, which continues to equate work with employment. So there you can see the conception that predominates in Venezuelan society. We continue to think that care is not work, that it doesn’t involve expenditure of energy. Care is seen as pure love, and the most tragic part of all this is that “only women love.” It is an important debate and an ongoing struggle for feminist movements.

Regarding the interruption of pregnancy, it has not been possible to move forward either. It is precisely in the Constitution where we find one of the most important barriers. It states that “life is protected from conception,” “conception” being a religious term and not a biological one. From there, we have been unable to debate the issue, often facing the argument that we are in an electoral year and so abortion is not a subject that can be debated at the time. But the truth is that, even when we are not in an election year, the debate doesn’t happen. In the current National Constituent Assembly there is total secrecy regarding this issue, and there has been no debate or reflection on it, despite the fact that the Women’s Rights Commission has the best intentions.

It is indeed a huge contradiction that in a revolutionary process there is no willingness to face the interruption of pregnancy with sincerity and without hypocrisy. The laws on dealing with it still discriminate against women, especially the poorest. There are prejudices but there is also hypocrisy and prudishness. It is a huge challenge for the feminist movement.