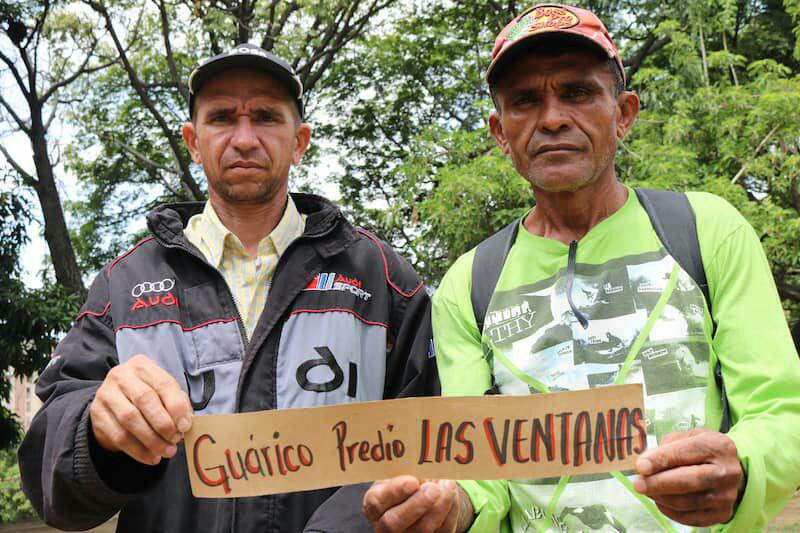 Two campesinos were briefly detained by security forces after a raid on a vigil at the Venezuelan Land Institute (INTI) on Tuesday morning.

Jose Perez and Eulalio Esqueda, from Guarico State, were detained by what was later reported to be an anti-drug commando from the Bolivarian National Police. A swift mobilization from popular movements, both on-site and through social media, managed to secure their release within hours.

According to witnesses, Perez and Esqueda are involved in the struggle for La Ventana landstead in Guarico State, with an INTI administrative act in their favor in place. However, the (former) landowner reportedly evicted the campesinos last week, burned down their houses, destroyed crops, and filed a criminal complaint against them.

“Even though there was an INTI ruling in their favor, the presumed landowner still finds ways to attack campesinos,” campesino spokeswoman Nieves Rios explained in a radio interview.

She explained that intelligence services had identified the two campesinos during a popular assembly held the day before. “Their only crime is struggling for the land,” Rios insisted.

Over 100 campesinos from the Campesino Struggle Platform have held a vigil outside INTI headquarters in southern Caracas for over three weeks, demanding that authorities address a host of problems in the Venezuelan countryside.

Platform spokesman Jesus Osorio likewise denounced the police raid against what had been a peaceful occupation by campesinos from across the country, accusing INTI President Luis Soteldo of responsibility.

“We are willing to defend the Revolution whatever it takes,” Osorio said in a video on social media in which he called for the solidarity of Caracas social movements. Campesino leaders likewise denounced police repression to President Maduro and other high ranking officials via social media. No official comment has been made so far about Tuesday’s events.

Venezuelan campesinos made headlines in July and August 2018 when they embarked on an over 400 kilometer “admirable” march, on foot, from the rural heartlands to Caracas. They looked to draw attention to the plight they face in the Venezuelan countryside and demanded a meeting with President Maduro.

Maduro held a televised meeting with campesinos in which he ordered that their issues be addressed. Working tables at the National Constituent Assembly and the Vice Presidency were set up, but campesino leaders denounced that little to no progress had been made in solving problems. This includes disputes over land ownership, landowner violence or lack of support for small and midsize producers. Different campesino organizations have been adamant in demanding that Maduro’s instructions be fulfilled.

Last Thursday, the protesters moved from their vigil to stage a protest at Venezuela’s Agriculture Ministry in central Caracas. The demonstration generated a tense standoff with police, before a delegation was finally allowed inside to hold a meeting with Agriculture Minister Wilmar Castro Soteldo.

The recent mobilization has likewise secured the campesinos a series of meetings and assemblies with other public officials, including INTI representatives, as well as reactivating the working tables with the Vice Presidency. Some of the landsteads currently in dispute had their status regularized in recent days and the deeds handed to campesinos. However, activists denounce that many other cases remain in limbo, that local authorities such as governorships are conniving with landowners, and that evictions, judicial persecution, and targeted killings continue unabated.