“Everyday life must continue in the event of war”. Astrid Villalobos is 56 years old and wears a red cap from the United Socialist Party of Venezuela. “To be able to go to work, to the health centers, to take the children to school,” she says.

She and thousands of others are preparing to fight and defend themselves against a possible military invasion of the country.

Astrid Villalobos is 56 years old and participates in the popular training of the Tactical Method of Revolutionary Resistance.
Sputnik / Esther Yáñez Illescas

It is called the Tactical Method of Revolutionary Resistance and consists of learning a series of basic military techniques adapted to all civilians without training “to defend the homeland”.

Every Saturday, in groups of 200, they meet in a court adapted for Bolivarian crossfit classes in an agro-ecological school in the Caricuao neighbourhood. In total, there are 13 ‘tests’ on the court that they will have to learn, practice and pass. 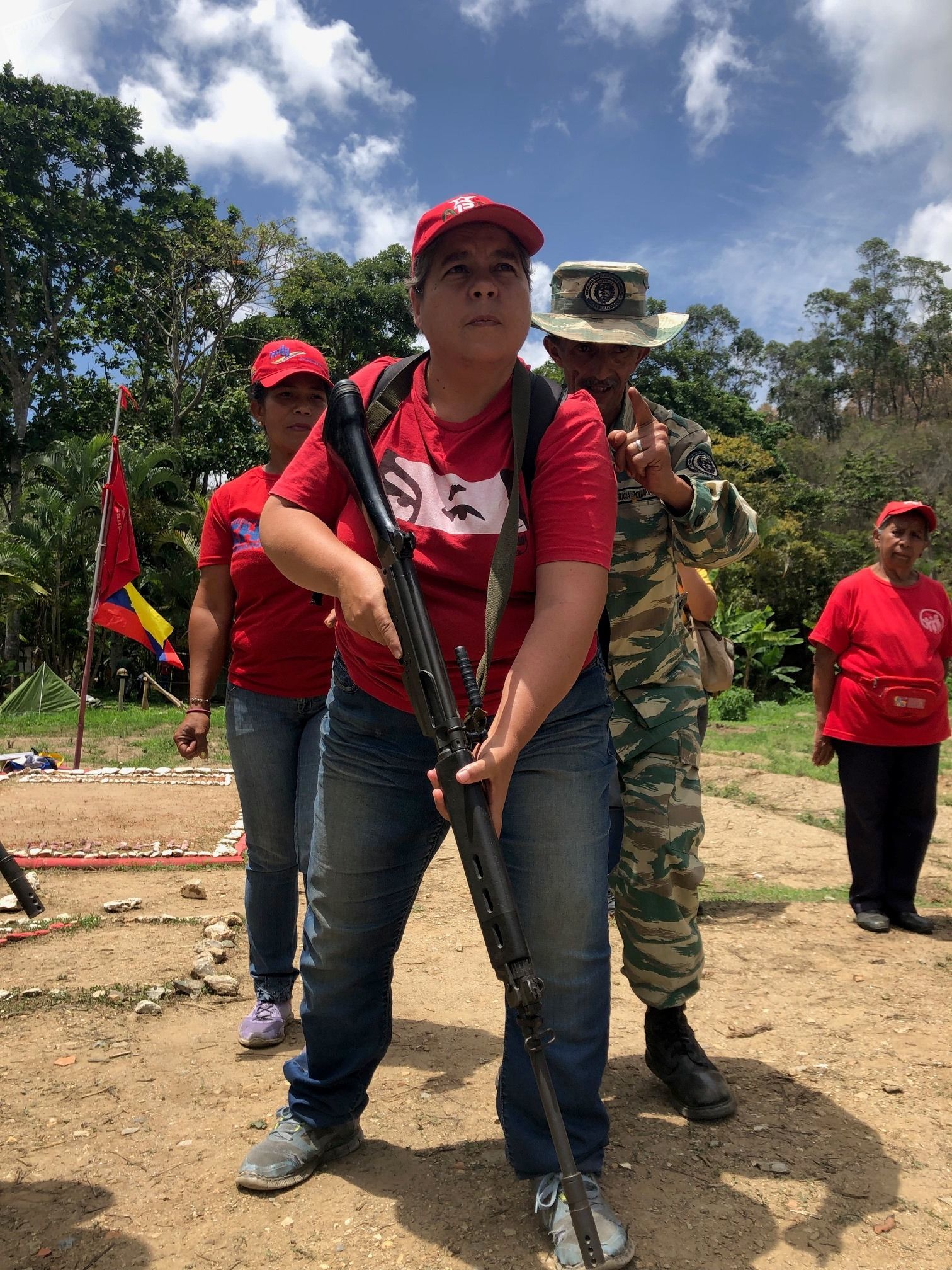 The first thing is the theory of war, which is explained in an improvised tent called the “pecao”: which is the ” implementation of full operational readiness”. A basic guide showing them how to move, how to act, how to protect themselves and who to trust if there was a conventional war in Venezuela.

They learn first aid, communication techniques, how to recognize poisonous and non-poisonous plants, self-defense techniques, how to identify an enemy, how to build a trap, how to camouflage themselves, shoot light automatic rifles (FAL) and even how to withstand the effects of tear gas.

Astrid comes from the Parroquia de La Candelaria, which is an area located in downtown Caracas, known for its Spanish taverns and for its harshness in the guarimbas era, as the periods of street violence caused by opposition protests in 2014 and 2017 are known.

“We receive training to defend our territory in the event that we experience another similar episode,” says Astrid. 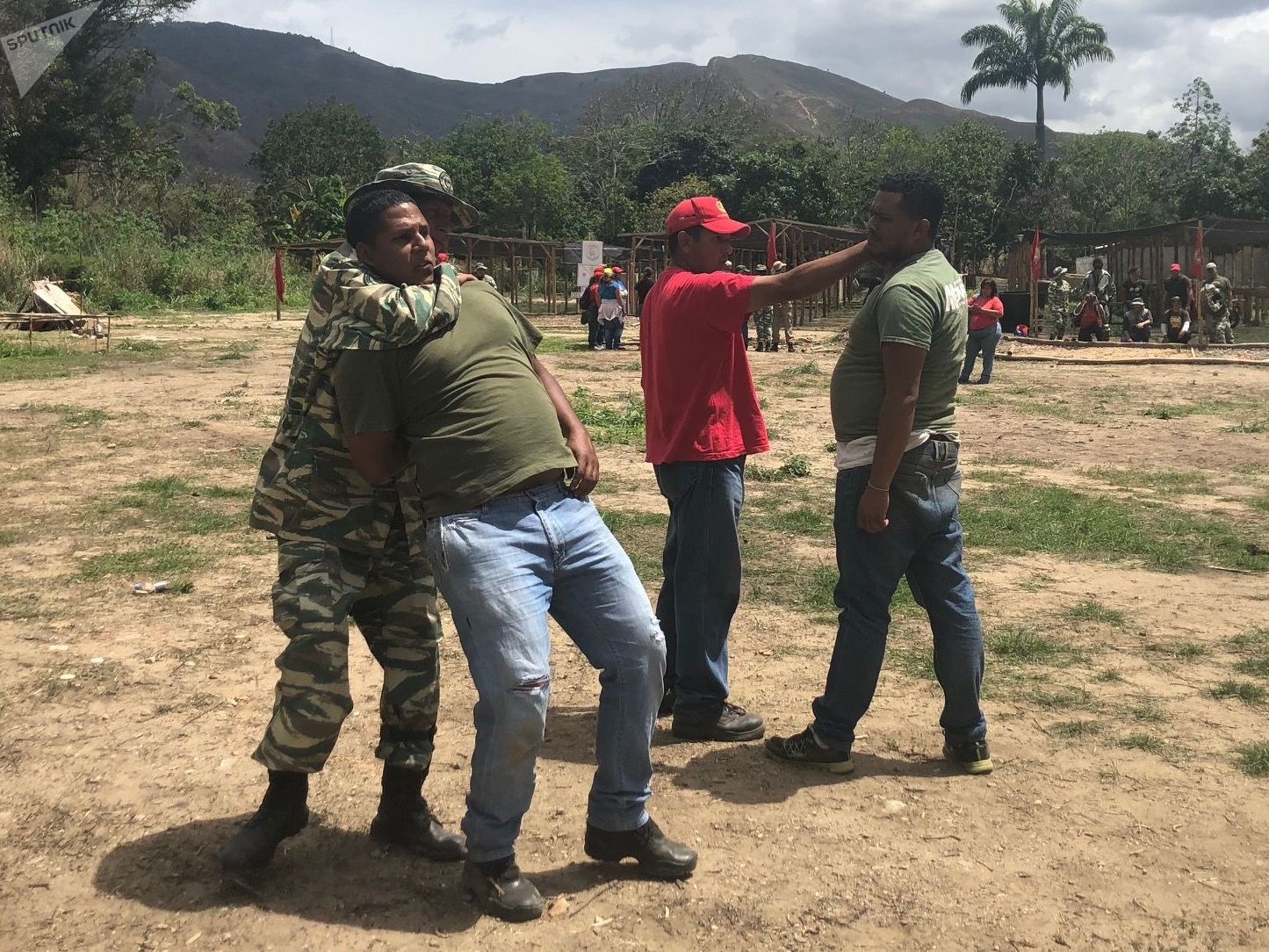 Combat techniques, how to move, how to know where you stand in a war: these things are learned in the training of the Tactical Method of Revolutionary Resistance.
Sputnik / Esther Yáñez Illesca

Her body, and her age, are not those of a young soldier capable of doing everything, but she gets around the obstacle course lightly. She finishes jumping a tyre no less than 50 centimetres high before explaining that “there are things that you obviously can’t do or can’t do as easily as men or younger people”.

“But it doesn’t matter, because anyone can help; it’s not all physical work. We can give instructions or handle intelligence information for law enforcement,” she says.

Astrid outlines the protocol of action they are learning in the event of an attack, either by a foreign agent – an American invasion, for example – or by the opposition right.

The Tactical Method of Revolutionary Resistance is based on having cooperating patriots in all territories, explains Major Jesús Orozco, of the Venezuelan Army.
Sputnik / Esther Yáñez Illescas

“We have cooperating patriots in all the territories and in case something happens they would give an early warning specifying what the irregular situation is. From there, we must assess how many individuals are there and how many of us there are, what weapons they handle… We take photographs and videos and pass them on to the state security forces. We always work together with them,” he describes.

Candelaria has high buildings and its roofs are a weapon of war in favour of the people. “From there we see everything,” says the prospective Venezuelan fighter.

Army Major Jesús Orozco is in charge of supervising the practice in Caricuao. He is playful when he relaxes, but when he speaks to his civilian apprentices he uses the classic tone of his military vocation.

“Venezuela is not going to kneel to the empire. We are convinced that we are and will be a free country because we are heirs to the glory of Bolivar,” he says.

The eldest knows that these people are a weapon of mass destruction. While the world underestimates them because of their appearance or their age, Chavismo realizes the importance of having on its side a faithful, believing and respectful people of a legacy that gave them identity and resources for class consciousness and socialism. 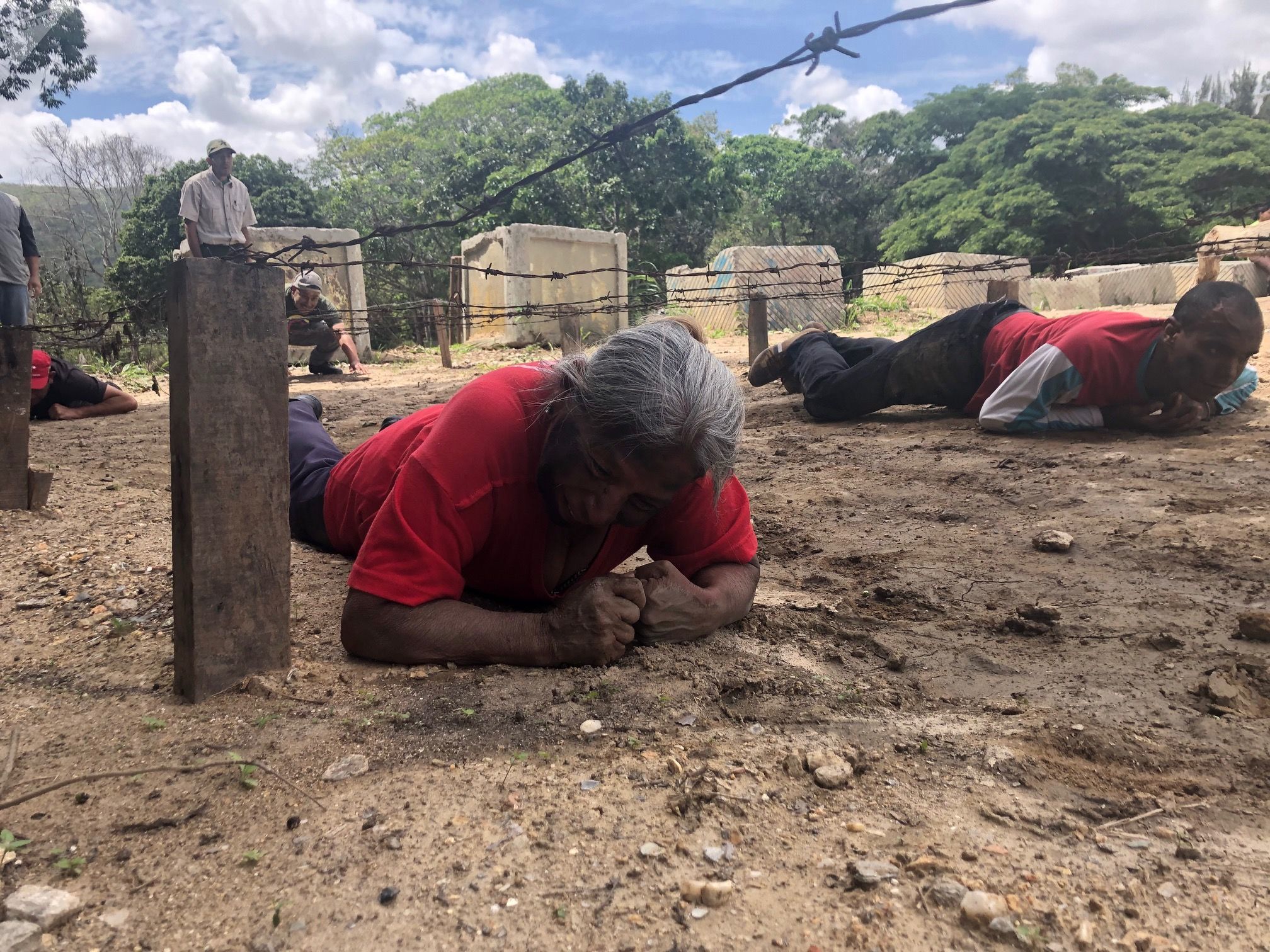 Chavismo realizes the importance of having on its side a faithful, believing and respectful people of a legacy that gave them identity and resources for class consciousness and socialism. The eldest knows that these people are a weapon of mass destruction.
Sputnik / Esther Yáñez Illescas

“People don’t know that a 50-year-old woman is more dangerous than the most powerful airplane or war tank in the world,” says the officer. “Because a war tank or an airplane emits heat and with any defense system can be destroyed. But a person in a house is capable of having a switch, for example, and that switch can be directed and cause an explosion. 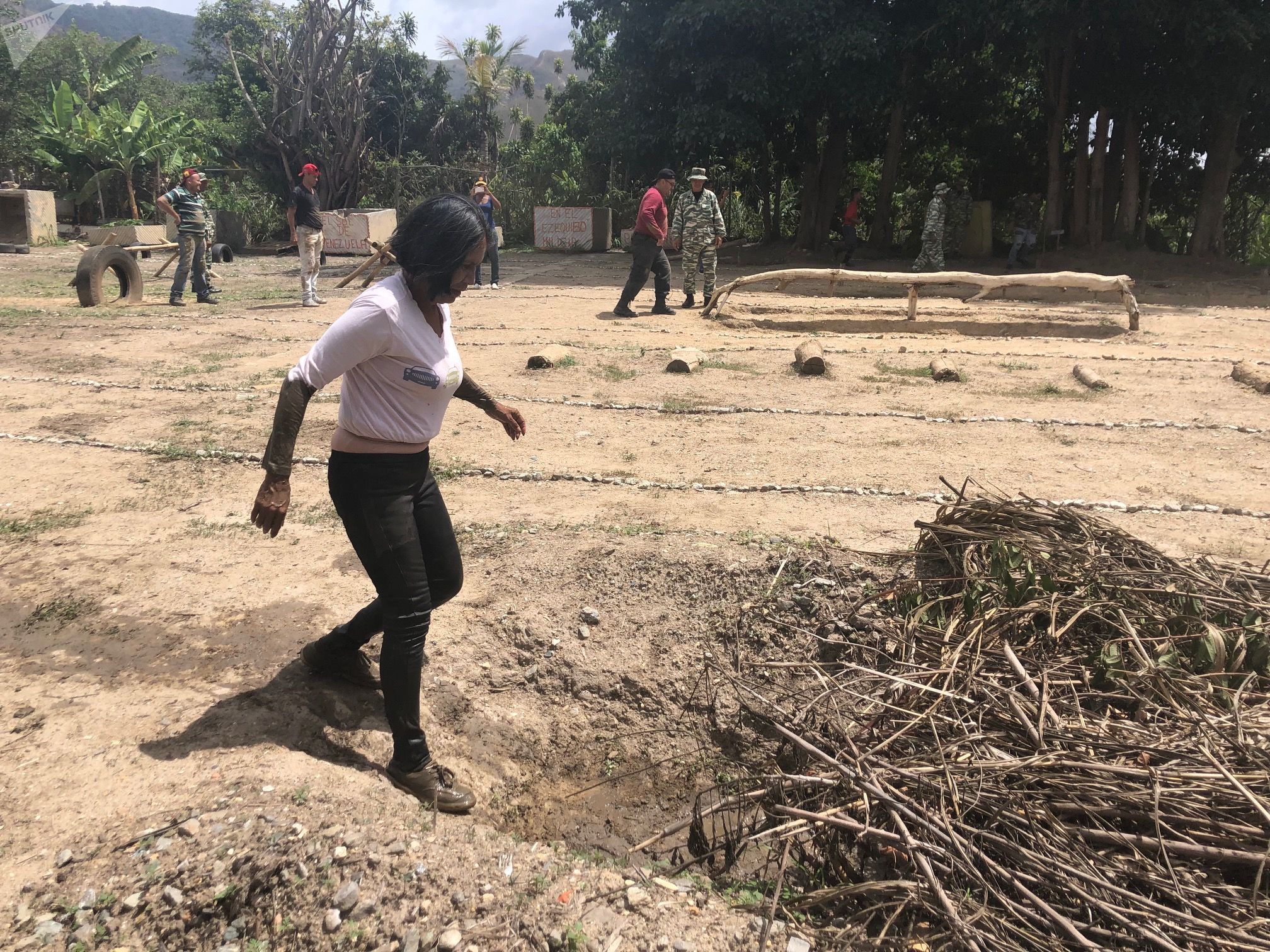 If there is a foreign military intervention, foreigners may step on Venezuela but they are not going to walk out of here, says Army Major Jesús Orozco.
Sputnik / Esther Yáñez Illescas

The key to understanding why Venezuela and Nicolás Maduro’s government do not fall is precisely this. There is a humble people, a powerful mass, Chavista and loyal to 20 years of Revolution in spite of everything.

Major Orozco is aware of who those residents are who have come to train at Caricuao in their worst clothes to freely stain themselves in the mud: “They [the foreign countries, the U.S., the opposition] may step on Venezuela but they are not going to walk out of here.

There is a humble people, a powerful mass, Chavista and loyal to 20 years of the Bolivarian Revolution, capable of leaving everything in case of a foreign intervention.
Sputnik / Esther Yáñez Illescas

“We are willing to give our life for our country and when they enter here they will find a people who are obedient. Make no mistake about the Venezuelans,” he says.

The truth of his words are chilling because it is the constancy of a people at a time of economic crisis and international siege. “Always loyal. Traitors never,” the chorus is heard in training.

The people are divided into groups, and each one is placed into one of the 13 “tests” or instructions that they will have to learn and practice, and all will continue rotating until they complete the entire circuit. 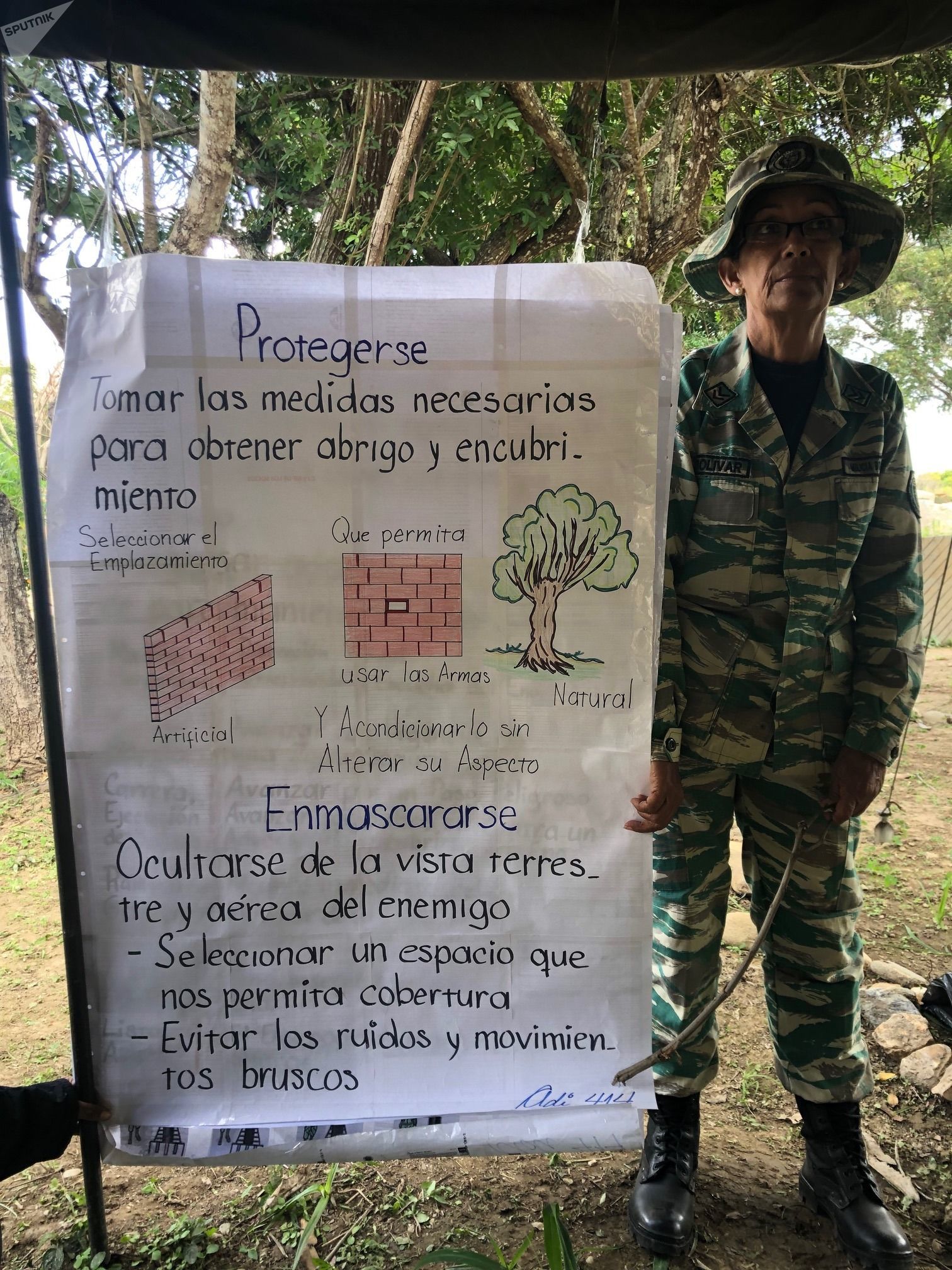 In the event of an eventual war or invasion, civilians need to have some idea of how to defend themselves: that is the premise of the Tactical Method of Revolutionary Resistance.
Sputnik / Esther Yáñez Illescas

Apart from Major Orozco and other members of the Armed Forces who accompany him, there are several dozen militiamen, formed in the Military Civic Union -recognized in the Constitution of the Bolivarian Republic of Venezuela- who are in charge of instructing the groups and do so with overwhelming skill.

One of them, lean, short and approximately 60 years old, perfectly well uniformed in green camouflage, holds a FAL rifle and teaches the group in turn to assemble, disassemble, charge and wield it, although the apparatus sometimes gets stuck during the process. 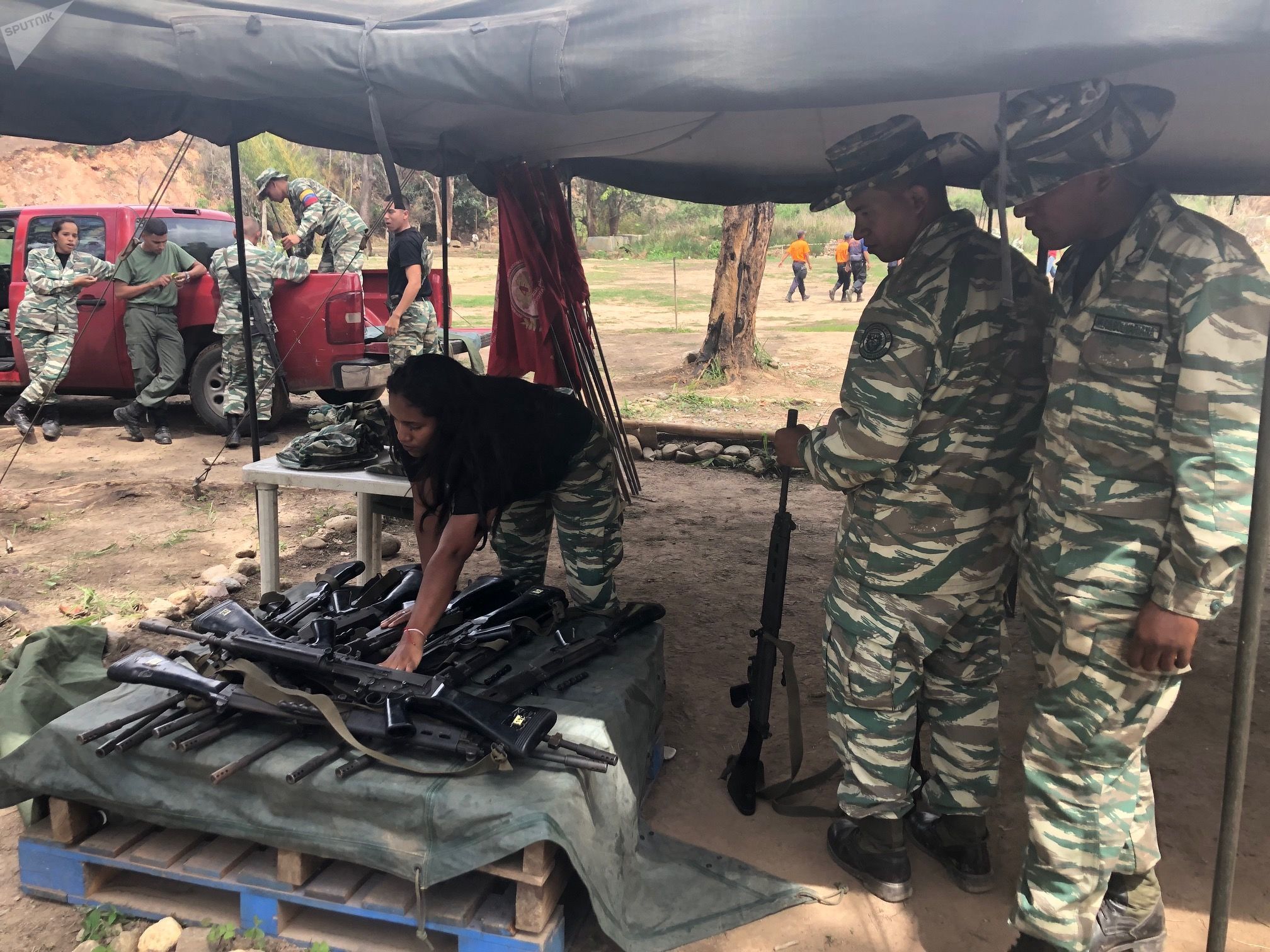 In the Tactical Method of Revolutionary Resistance, civilians learn how to use small arms.
Sputnik / Esther Yáñez Illescas

The man is a war encyclopedia: “this model rifle has been used in all wars…”. It is a reference to those that made history from the second half of the twentieth century, when it began to be commercialized.

“It is a weapon of Belgian origin and it is a combat rifle. There are a few words in French,” he specifies. There are some in the group who take notes in a notebook. There is also simultaneous translation for the deaf; one of the neighbours is performing the rounds, even reproducing the positions of the instructing militia officer when he shows the best way to hold the FAL. Firm shoulder, fingers never near the trigger, feet slightly apart.

Avoiding obstacles, creating traps, dodging them: all these skills are exercised in the Tactical Method of Revolutionary Resistance.
Sputnik / Esther Yáñez Illescas

In the ‘Displacement Techniques’ section there is another group that is learning how to move under the discipline of the ‘Spear Tip’, which is a method of moving to the forefront.

Also rifle in hand, fast race in squatting, small subgroups of two or three people and a strategic position for the assumed battle. In that practice is Dulce Núñez, who is 69 years old and is the sixth time he has come to training. She moves around Caricuao’s court in the open air as if she had built it herself with her own hands.

She is sure of why she is there and of the need to instruct the people in the defense of their territory, and she speaks of the trainings as if they have been part of her life for much longer. It is astonishing how familiar she is, for example, with how they are taught to withstand the effects of tear gas.

“They simply throw them into the air and it is enduring and holding on. To tolerate the annoyance, the peculiar element”. “And how long do they practice it? Quickly. “And you can take it well, do your eyes cry?”, “I cry a lot, but I can stand it. It’s customary now”.

Dulce Núñez says that thanks to the military training she receives, she is able to withstand the effects of tear gas (despite being 69 years old).
Sputnik / Esther Yáñez Illescas

The last test of the field before lunch is the obstacle course and is revelry. Jumping, ropes, climbing, tires and there is even a part where they have built a small cave that has water on the ground and you have to go in and out crawling through it.

Everyone does everything, waits in line and rushes forward happily. Some shout political slogans: “For the Homeland,” “For Bolivar,” “For Chavez”. There is a 75-year-old woman who crawls under a barbed wire for ten meters without help.

Civilians who participate in the Tactical Method of Revolutionary Resistance receive 13 tests to draw lots and be prepared in case of a military incursion.
Sputnik / Esther Yáñez Illescas

She wears a red T-shirt and her face is painted black and the people who pass the test next to her encourage her with shouts of encouragement. They are training their bodies and strengthening their spirits. Their endurance is astonishing. It is exciting. The capacity of a people to master themselves. 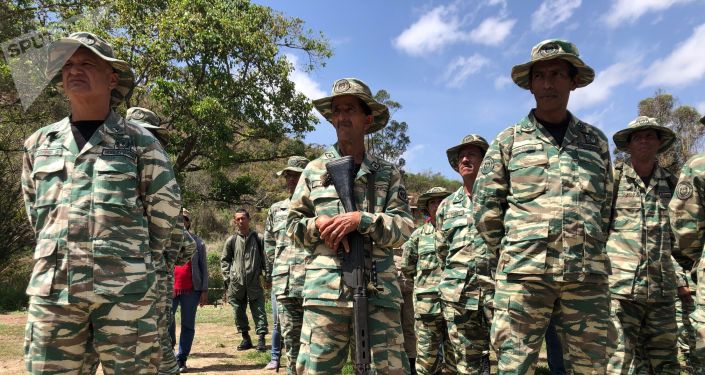 The militia give support to train the civilian population to be prepared in case of war.
Sputnik / Esther Yáñez Illescas