US supported protesters confront a successful socialist government demanding freedom and human rights. They occupied public spaces engaged in phony dialogue with the authorities, rejected requests to dismantle their protests peacefully and finally attacked and murdered security forces before being forced to disperse. Several hundred people were killed including a large number of security forces personnel and bystanders. But international media reported wholesale massacres and mass arrests of innocent people that never happened.

That description covers US regime change attempts from China and Iran to Venezuela and Nicaragua. The pattern is always the same.

Notes for 30th Anniversary of the TianAnMen Incident gives a good summary of the reality of what happened in Tiananmen Square in Beijing, 30years ago. The article includes photos of burnt out armored vehicles attacked by protesters and the burnt bodies of security force personnel who were killed when, at one stage, they sought, unarmed, to persuade the protesters to disperse. That phenomenon is a constant in US regime change efforts, occurring in China, in Ukraine, in Venezuela and in Nicaragua. Time after time, vicious sadistic violence against  security forces trying to defend and maintain public order gets reported as repression of peaceful protests. 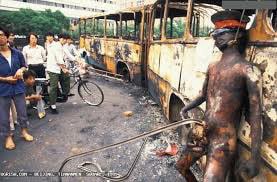 Other features common to all the violent US regime-change offensives are :

The failure of US regime change in China allowed the authorities there to develop their socialist revolution, eradicating poverty, promoting unprecedented economic development and emerging as the world’s most successful economy. Increasingly, China is eclipsing the West both culturally and technologically. That is why the  US is applying sanctions against China.

Nicaragua has so far defeated US attempts at regime change. Now. it too is the victim of US sanctions attacking its economy. However, President Ortega’s Sandinista government has shown it is capable not only of defeating the violent coup attempt of 2018 but of rebuilding the economy despite the US sanctions applied to date.

Just as has happened in the case of the Russian Federation, China, Iran, Cuba and Venezuela, US sanctions designed to destroy economies have actually forced target countries to restructure their economies to cope with the challenges they face. It may not be clear whether other countries will be as successful as Russia. But the pattern is clear. In the end, the malevolent lies of the US and its allies will yield the opposite result of what they want.

China proved that even back in 1989. Thirty years later, the decline of the United States and the despair of its elites in the face of a new multipolar world make what China has achieved  a real possibility for other countries too.