Although it has been well established that no “massacre” actually took place in Tiananmen Square on June 4, 1989, the term is still widely used to refer to the violence that did occur in Beijing that fateful night. As is well documented the violence was instigated by agents provocateurs, mostly unemployed youth who were set adrift as China transitioned from the command economy of (Chairman) Mao Zhedong  era to the socialist market economy of the (Chairman) Deng Xiaoping era.  Mobs of these disaffected young people were set loose, firebombing PLA vehicles, incinerating their occupants and torching whole convoys of army vehicles sent to secure order in the capital. There should be no doubt in any thinking person’s mind that agents of the U.S. CIA and the Taiwan based Guomindang were involved in recruiting them. But what led to this insurrection that the West refuses to let go of? 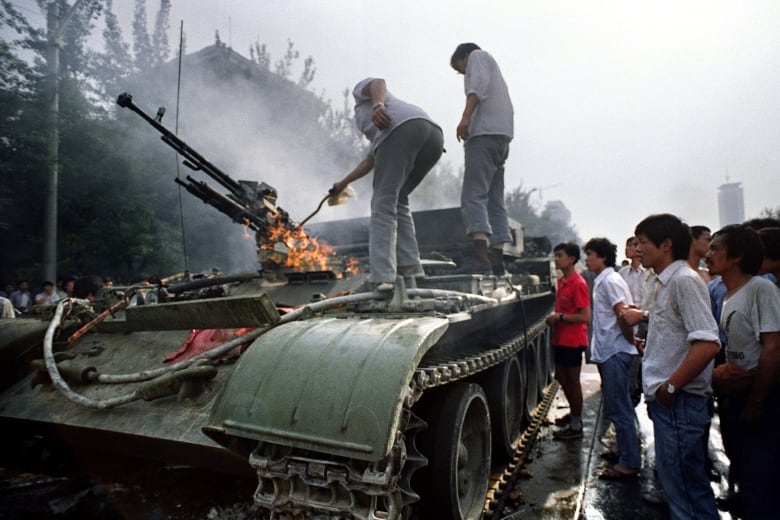 After the Cultural Revolution, but before Deng’s economic reforms kicked in, China was betwixt and between, without any ideological moorings. The old ways of doing things were discredited but new approaches to organizing the economy and society were not yet fully developed. Western liberal ideas of “freedom” and “democracy” found support among a growing segment of students and intellectuals. Many others were fearful of losing the social and economic benefits, known as the “iron rice bowl” that they had become accustomed to when the state fully controlled China’s economy. The times they were fast changing. The Soviet Union and the socialist bloc were imploding and China seemed to be the last Communist state standing. If China succumbed it was unlikely that the other surviving socialist states, North Korea, Vietnam and Cuba would last much longer. Thus, the U.S. was chaffing at the bit, hoping to push China over the precipice like what was happening in the USSR and Eastern Europe. They were looking for a Chinese Gorbachev, and they found him in former Chinese Premier and then current General Secretary of the Communist Party of China Zhao Ziyang. As will be seen the U.S. was well placed to foment what would later be called a “color revolution” in China. So, let’s delve a bit deeper into the cast of characters behind the scenes of what would eventually be called the ‘Tiananmen Square Massacre.’

James R. Lilley, top CIA Asia operative, was U.S. ambassador to China before, during and after the Tiananmen incident. George Soros, instigator of later “color revolutions” had a China based NGO called the Fund for the Reform and Opening of China that supported the protests and General Secretary Zhao Ziyang – a neo-liberal in waiting who would later be called China’s Gorbachev. Ambassador Lilley had a fascinating history, being born in China to a U.S. oil executive stationed there in the pre-WW2 years. He had a Chinese nanny and was thus a native speaker of Chinese. Returning to the United States before the U.S. entered WW2 he subsequently went to Phillips Exeter Academy prep school and Yale University. His fluency in Chinese and upbringing led him to the CIA where he became its top Asian operative. “As a CIA operative, Lilley worked in countries across Asia, including Laos, Japan, Hong Kong, Taiwan, and China. In Laos, he worked to undermine the Communist insurgency, and he helped to insert a number of CIA agents into China. By 1975, Lilley was appointed to the position of national intelligence officer for China, which made him the highest-ranked expert on China in the American intelligence community. Early in the administration of Ronald Reagan, he was appointed to the National Security Council, where he served as the senior expert on east Asia. From 1981-1984, he served as Director of the American Institute in Taiwan, which serves as the unofficial diplomatic liaison to the government of the Republic of China..” So much for Lilley.

George Soros’ anti-communist credentials are also well-documented and his sponsorship of neo-liberal causes, think tanks and NGOs well known and documented. “Soros is a well-known supporter of progressive-liberal political causes. He played a significant role in the peaceful transition from communism to capitalism in Hungary (1984–89) and provided one of Europe’s largest higher education endowments to Central European University in Budapest. Soros is also the chairman of the Open Society Foundations.” As documented by Godfree Roberts in ‘Tiananmen Square, 1989 – Revisited‘: “In 1986 Soros endowed his Fund for the Reform and Opening of China with one million dollars – a huge sum for China those days – to promote cultural and intellectual exchanges with Zhao’s Institute for Economic Structural Reform. In 1988 the National Endowment for Democracy opened two offices in China, gave regular seminars on democracy, sponsored select Chinese writers and publications and recruited Chinese students studying in US. In February 1989, two months before the CIA launched its Tiananmen destabilization campaign, President Bush paid his first and only visit to China.

“When the student protests erupted in late April the NED mailed thousands of inflammatory letters from Washington to recipients in China and aroused public opinion through Voice of America (VOA) shortwave radio broadcasts, in Mandarin, across China on the days of the protests. In Nanjing, university students had boom-boxes turned high as the VOA described events in China. “Deng had CIA strategist Gene Sharp arrested and expelled to British Hong Kong, whence he directed the insurrection, as he recounts in his memoir, Non-Violent Struggle in China. Another CIA operative, VOA’s Beijing chief, Alan Pessin, provided encouragement, provocation, strategic guidance and tactical advice in round-the-clock broadcasts and students who were there still talk of the VOA’s promised land of “freedom and democracy”. […]”  So much for Soros.

Zhao Ziyang, former Chinese Premier and General Secretary of the Communist Party of China at the time of the Tiananmen protests was China’s Gorbachev. Zhao in his memoir stated that “China should adopt a free press, freedom to organize, an independent judiciary, and a multiparty parliamentary democracy.” He also called for “the privatization of state-owned enterprises, the separation of the Party and the state, and general market economic reforms.” Some of his economic program was implemented, but his complete economic and political package of reforms would have led to the formation of a multi-party social democracy to replace the unitary socialist state ruled by the CPC. So much for Zhao.

Thus it can be seen that Lilley, Soros and Zhao formed a perfect triumvirate both inside and outside the CPC that was extremely well-placed and well-versed in destabilizing and overthrowing established socialist states, by hook or by crook. To think that when the Soviet Union and other socialist states ruled by Communist parties were imploding the likes of Lilley, Soros and Zhao Ziyang were not actively conspiring to bring down the PRC and convert it into a vassal state of the U.S. is beyond the bounds of credulity. So what would have been the result if the CPC had not intervened and quelled the unrest and Zhao Ziyang and his supporters, both foreign and domestic, had been able to implement their “pro-democracy” agenda? According to David Shambaugh, a so-called “China expert,” China would be a better place if Zhao’s neo-liberal economic and political reforms had been enacted. To quote, “Had Zhao remained in power and been able to pursue this twin-reform strategy, it is an open question whether he and China would have wound up with the same fate as Gorbachev and the former Soviet Union, or whether this strategy would have worked in China, where it did not in the U.S.S.R.” But, as far as the U.S. and the West in general is concerned the strategy did work in the USSR. And, they would have done everything possible to have made sure it worked in China as well if Zhao had implemented his counter-revolutionary agenda. Luckily the “éminences grise” of the CPC were able to thwart the machinations of Zhao’s puppet-master George Soros of color revolution fame.

What would China be like today if Zhao Ziyang had retained power? It would be a compliant vassal of the U.S. in East Asia.

As Shambaugh et al. state, China would have a “much more open civil society and media (i.e. controlled by U.S. neo-liberal NGOs and corporate conglomerates); tolerated some dissent (i.e. anti-communist quislings); enfranchised the eight “democratic parties” (i.e. allowing them to be infiltrated by foreign agents) and empowered the National People’s Congress and provincial people’s congresses (i.e. destroying China’s system of consensual democracy); established a Hong Kong-style professional civil service (i.e. allowing anti-communist sinecures to metastasize within the state apparatus); separated Party from state (i.e. ensuring the collapse of Party control and the establishment of an oligarchic “representational democracy”); made the military beholden to the state and constitution rather than a tool of the Communist Party (i.e. allowing for a military coup whenever the U.S. felt it necessary); more strictly controlled opportunities for corruption and strengthened the non-Party control mechanisms (i.e. by making corruption an integral part of the system as in the U.S. and other Western democracies); encouraged greater “inner Party” feedback mechanisms (i.e. encouraging factionalism); and (finally) proceeded with gradual direct government elections up to and including central-level officials (i.e. allowing politicians to be bought and sold to the highest foreign bidder). In other words a neo-liberal’s wet dream. China would have descended into the hell that overtook the Soviet Union and remained as underdeveloped as the world’s largest democracy, India.

Thus, if the Tiananmen protests had succeeded and the program of Lilley, Soros and Zhao had been fully implemented, the state led economic miracle of the last 30 years would have been still born and China would have been neutered as a potential rival of the U.S. as it is increasingly becoming. That is why the U.S. and its captive media still rue the day that the CPC came to its senses and derailed the U.S. inspired counter-revolutionary movement that the Tiananmen protests had become. And that is why the Western media and politicians continue to harp on its suppression 30 years later.

Dennis Etler is a former professor of Anthropology at Cabrillo College, California, and an expert on Sino-U.S. relations.