The government’s goal is to have one hundred thousand militiamen by October, with 22 training centers in 117 territorial axes of the capital.

Caracas takes the form of trenches. In ten days, seventeen hundred men and women have received instructions for its defense. The objective is to reach one hundred thousand in October, with training centers in the twenty-two parishes to encompass the one hundred and seventeen territorial axes of the capital: so that the city will be a quagmire for coup actions.

The first formation space is located to the south of the city, in Macarao. Here the right wing burned the headquarters of the communal organization on April 30, while the cameras focused on Juan Guaidó, Leopoldo López, and the handful of soldiers during the failed action. Leaders of social movements, grassroots organizations of Chavismo, and people of all ages participate in this day of training, for which it is the first time they have grasped a rifle or learned reconnaissance techniques. No one has forced them to come: they are humble people, from organized neighbourhoods, from their daily efforts that have become a battle for gas, money or transportation.

There are several components to the training, such as learning how to map the neighbourhood, how to mobilise with weapons, medical and evacuation techniques, self-defence and physical exercises. The instructors are members of the Bolivarian Militia, the body made up of more than two and a half million men and women, the backbone of the doctrine of integral defense of the nation. The leadership of the United Socialist Party of Venezuela (PSUV) is at the forefront of the political leadership of the training plan.

“Caracas is a city of peace, a city of life, and we are going to defend it with the organization of our people, the civil-military union, and with the preparation and intelligence that we are developing in this effort of integral formation”, explains the mayoress of the Municipality of Caracas, Erika Farías, member of the leadership of the PSUV and the Francisco de Miranda Front.

The training work includes several groups: the PSUV, allied parties, social and communal movements, and members of the National Constituent Assembly. There are three primary objectives. First, the organization of the defense through the design and execution of a plan in a unified manner among the different actors, so as to form a nucleus in each territory. Second, the exercises themselves. Third, the productive effort, where the aim is that each of the twenty-two parishes will have a training and food production center.

“All Venezuelans have co-responsibility in the defense of the homeland, it is written in article 326 of the Constitution. It is not only a question of armament, we are going to create a very important logistic chain, for each combatant that is formed here there must be eight or nine people behind, the training must continue, in each territory there must be all components necessary for the integral defense”, explains Colonel Boris Iván Berroterán de Jesús, commander of the integral defense area 414 Caricuao.

The training is intended to respond to two main hypotheses of conflict. The first is already known, it is about the actions that the right wing has carried out in 2013, 2014, 2017 and at the beginning of this year: attacks on PSUV premises, communes, health centers, children, Chavista leaders, provocative night actions and attempts to cause chaos in popular areas. The right wing has been infiltrating and hiring armed groups for several years in order to challenge popular territories and to deploy them in moments of assault.

The second hypothesis responds to a scenario that has been denounced by the government: the possibility that the right wing may resort to the strategy of mercenary forces composed of different actors, such as paramilitaries, criminal gangs, private contractors. In such a scenario, the territories of Caracas, with their crowded hills with labyrinths, stairs and platforms, could be spaces for irregular confrontation. The organized population must be prepared to recognize these movements, and know how to respond.

The training plan in Caracas advances simultaneously with the central commitment to resolve the conflict presented by Chavismo since January: to dialogue in order to reach an agreement. These attempts were carried out secretly for months before being made public two weeks ago following the rapprochement in Norway’s capital Oslo.

Chavismo has shown itself united around the search for dialogue, and has affirmed that it will insist on reaching an agreement. The opposition, on the other hand, has been divided on the matter: while one sector is part of the dialogue attempt, such as the representatives of Guaidó -directed from the United States- and the Un Nuevo Tiempo party, another sector insists that there is nothing more to talk about or negotiate. The second group maintains the argument that the only way forward is through international military action. To this end, they work openly, for instance, on the fictitious re-entry, via the National Assembly, of Venezuela into the Inter-American Treaty of Reciprocal Assistance.

The U.S. government, for its part, maintains the public position that any solution requires the departure of Nicolás Maduro, and through its vice-president Mike Pence, has re-established support for Guaidó. The question that has been present since the beginning of Guaidó’s self-proclamation, is: How far is the United States willing to go?

While these are the public debates, what is being prepared behind closed doors? The right wing, in accordance with the U.S. plan and financial support, has carried out violent actions during the days surrounding Guaidó’s self-proclamation, and attempted forced entry from Colombia on February 23, unleashed attacks on the electricity system, and attempted to carry out political-military action in the early hours of April 30. What if they are not yet willing to agree on the process in Oslo that does not involve the exit of Maduro? Chavismo is working on all possible scenarios. The epicenter of power that seeks to undermine the coup d’état is Caracas, and it prepares itself, accordingly, in the trenches of the city. 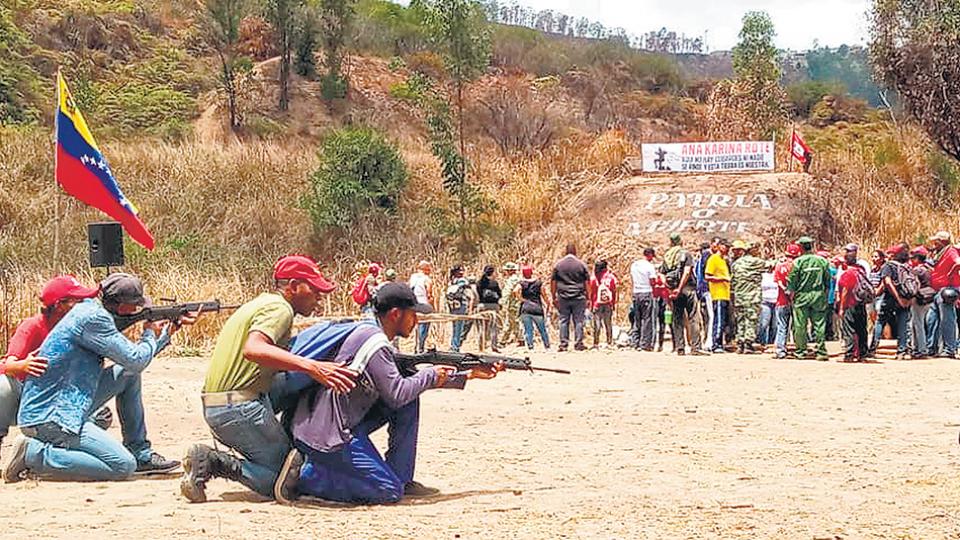