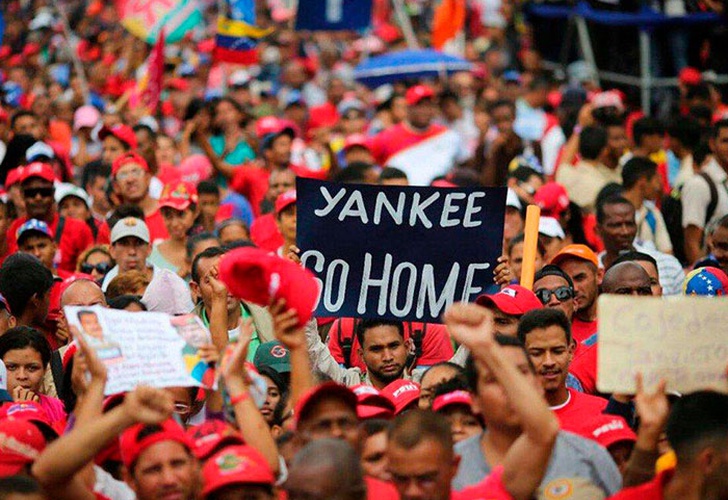 The U.S. does not learn from history.

“Oh, I am against military intervention!” goes a “pacifist” narrative heard in the North that serves as a pretext for a statement on Venezuela. This prelude consoles the soul, clears the liberal conscience and strives to maintain the desired – but increasingly elusive – “progressive” academic, journalistic and political credentials.

However, the “pacifism” dealt with here has nothing to do with Norway’s recent gesture to seek a peaceful solution. The government of President Nicolás Maduro is of course fully involved in this latest attempt at negotiations. In fact, the Venezuelan government has been proposing this throughout the crisis.

For example, on May 1, Secretary of State Mike Pompeo, as one of the main architects of this “pacifist” narrative along with John Bolton and President Trump, said, “Military action is possible. If that’s what’s required, that’s what the United States will do…We’re trying to do everything we can to avoid violence… We’d prefer a peaceful transition of government….”

There is only one reason the U.S. has so far not been able to take the military option off the table and put it into action. It is not because it has any qualms about military invasion of other countries, but rather because it has failed miserably in its over-ambitious attempt to break up the civilian-military alliance, an explicit precondition for the military option, at least for the time being.

However, as far as Washington is concerned, the economic war option has not only always been on the table, but it has been ferociously applied. After the 2013 election of President Nicolás Maduro following the death of Hugo Chávez, the U.S. supported the all too often violent opposition protests against the legal election, resulting in a pretext for President Obama’s Venezuela legislation in 2014, designed to sanction individuals in the Bolivarian Republic as a lever of economic punishment with the goal of creating hurdles for Chavista political officials and a section of the state.

In March 2015, Obama extended this policy by declaring Venezuela a “threat to U.S. national security,” opening the door for additional individual sanctions. Trump expanded this further into collective economic sanctions and full-blown economic war. As the noted international writer/academic Vijay Prashad, influential in the U.S. left, has written, “Obama forged the spear; Trump has thrown it at the heart of Venezuela.”

According to an April 2019 study published in the U.S. by noted U.S. economists Mark Weisbrot and Jeffrey Sachs, these and other economic sanctions “reduced the public’s caloric intake, increased disease and mortality (for both adults and infants), and displaced millions of Venezuelans who fled the country as a result of the worsening economic depression and hyperinflation. They exacerbated Venezuela’s economic crisis and made it nearly impossible to stabilize the economy, contributing further to excess deaths.”

They go on to argue that “All of these impacts disproportionately harmed the poorest and most vulnerable Venezuelans…. We find that the sanctions have inflicted, and increasingly inflict, very serious harm to human life and health, including an estimated more than 40,000 deaths from 2017–2018; and that these sanctions would fit the definition of collective punishment of the civilian population as described in both the Geneva and Hague international conventions, to which the U.S. is a signatory.”

The Venezuelan government claims that the war also includes no fewer than three electrical grid sabotages in March 2019 (March 7–14, March 29 and March 30). Coupled with this were three coup attempts, on January 23, February 23 and April 30. All three were met with multiple and widespread opposition in the streets by Chavismo to defend the revolution. However, one can imagine how this mass mobilization affects the already-battered economy and the “normal” running of what has become a very difficult life.

Moreover, the U.S.-led media war against Maduro and Chavismo is one of the most ferocious against any revolutionary leader in recent history.

On May 16, after a one-month physical standoff, the Trump Administration ordered a police invasion of the Venezuelan Embassy in Washington, DC, arresting four members of the embassy protection collective who were there at the invitation of the government of Venezuela, all while the “pacifists” continued their silence on the war in the very city where many of them live and work.

What then remains of this “pacifist” narrative in opposition to an eventual military intervention and in favor of a “peaceful transition” while remaining silent on the current multi-faceted war?

The “pacifists” provide complicit apologetics for Washington’s rhetoric on “peaceful transition” by framing opposition to U.S. policy on Venezuela solely in terms of avoiding military intervention while failing to denounce U.S.-backed coup attempts and economic warfare.

This policy appears to be designed to provoke a social implosion in Venezuela so that the U.S. can set up a client government without ever having put one military boot on the ground. Is this the new war? If it is, then this type of war is not that new.

Was this not the goal of the U.S. in 1960 as the guiding line of the blockade against Cuba, that is, to create “disenchantment and disaffection based on economic dissatisfaction and hardship” as indicated by the Department of State in 1960, so that people revolt against the government? And was this not the scenario that unfolded to overthrow the democratically elected government of Salvador Allende in 1973? This new regime change wine in old bottles is just as lethal today as it was yesterday. The U.S. does not learn from history.

Arnold August is a Canadian journalist and lecturer, the author of Democracy in Cuba and the 1997–98 Elections, Cuba and Its Neighbours: Democracy in Motion and Cuba–U.S. Relations: Obama and Beyond. He collaborates with many web sites, television and radio broadcasts based in Latin America, Cuba, Europe, North America and the Middle East. Twitter   Facebook Website: www.arnoldaugust.com.