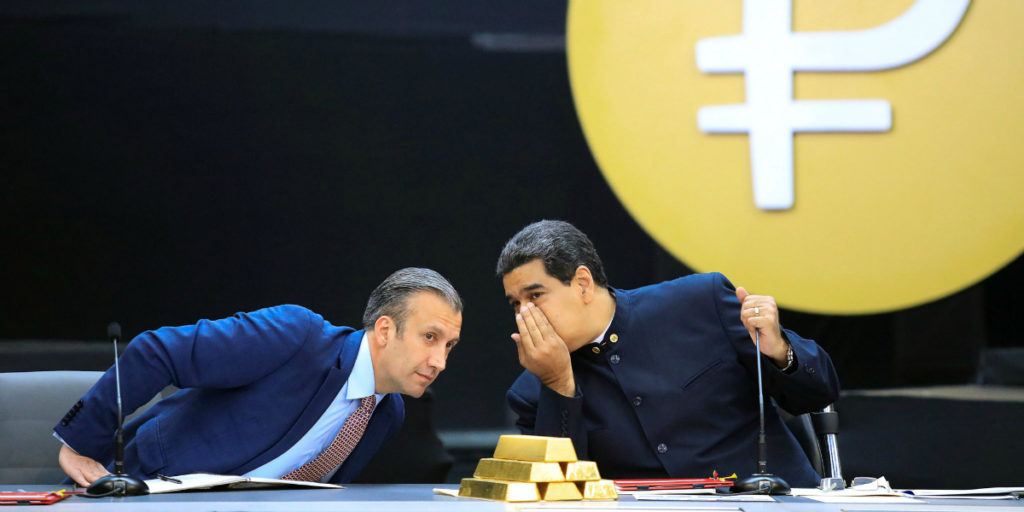 New York Times depiction (5/2/19) of Tareck El Aissami and Nicolás Maduro at an economic conference. What are they whispering about? Drugs or terrorism, no doubt. (photo: Marco Bello/Reuters)

Judith Miller and Michael Gordon published their now infamous New York Times article on September 8, 2002, falsely claiming on the basis of unnamed “American officials” that Iraq had acquired “aluminum tubes” with the aim of producing “an atomic bomb.”

Disgraced by her regurgitation of bogus claims, Miller left the Times in 2005, but her spirit is “alive and well” at the “paper of record.” Nicholas Casey follows faithfully in Miller’s footsteps, authoring dubious, anonymously sourced stories that coincidentally happen to further US regime-change objectives.

In a recent piece headlined “Secret Venezuela Files Warn About Maduro Confidant” (5/2/19), the Times’ Andes bureau chief claimed, on the basis of a leaked Venezuelan intelligence “dossier” that only his paper has seen, that Venezuela’s current Industry Minister and former Vice President Tareck El Aissami has active links to Hezbollah and drug trafficking. Casey wrote:

The dossier, provided to the New York Times by a former top Venezuelan intelligence official and confirmed independently by a second one, recounts testimony from informants accusing Mr. El Aissami and his father of recruiting Hezbollah members to help expand spying and drug trafficking networks in the region.

Unsurprisingly, the article has been endorsed by Florida Republican Sen. Marco Rubio, widely considered the point man for Trump’s Latin America policy, and whose zeal for regime change in Caracas appears unperturbed by elementary facts or international law. In a May 16 tweet, Rubio openly celebrated the fact that Venezuelan President Maduro “can’t access funds to rebuild electric grid,” thereby dispensing with any pretence that US sanctions are not directly aimed at the Venezuelan population.

The claims of an alleged relationship between Caracas and Hezbollah are, however, entirely unoriginal, having been repeated by corporate journalists and national security pundits without evidence for years.

“Hezbollah has a long and sordid history in Venezuela,” wrote Foreign Policy (2/2/19) earlier this year. Newsweek claimed in a 2017 article (12/8/17) that the Lebanese political party “was involved in cocaine shipments from Latin America to West Africa, as well as through Venezuela and Mexico to the United States,” while The Hill (1/13/17) labeled El Aissami a “fan of Iran and Hezbollah,” rehashing US allegations going back to 2008.

Likewise, corporate media claims about Hezbollah presence in Latin America have not been exclusive to Venezuela, with similar baseless rumors circulating about the Lebanese political party operating in the so-called Tri-Border Area of Paraguay (Extra!, 9–10/07).

Such stories just happen to buttress similar unsupported claims by US Secretary of State Mike Pompeo that Hezbollah has “active cells” in Venezuela. Pompeo and other senior administration officials have repeatedly warned that a military option to remove the Maduro government is “on the table,” while self-proclaimed “interim president” Juan Guaidó has requested “cooperation” from the Pentagon’s US Southern Command.

Casey himself has a long-established track record in dodgy Venezuela reporting, ranging from ludicrous stories about Cuban doctors (FAIR.org, 3/26/19) to false claims that private media like Globovision and El Universal “toe a government line.” (See FAIR.org, 5/20/19.) 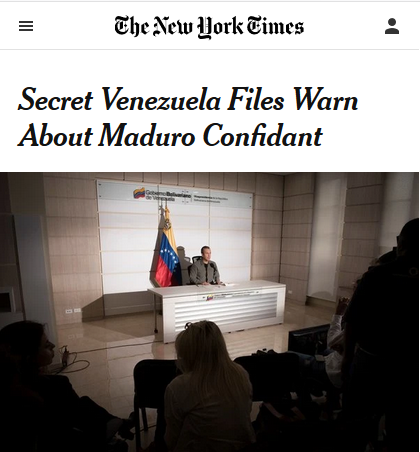 The New York Times (5/2/19) publishes sensational charges about an official enemy, based on documents only the Times has seen, vouched for by unnamed intelligence agents. What could go wrong?

in a plan to train Hezbollah members in Venezuela, “with the aim of expanding intelligence networks throughout Latin America and at the same time working in drug trafficking.” 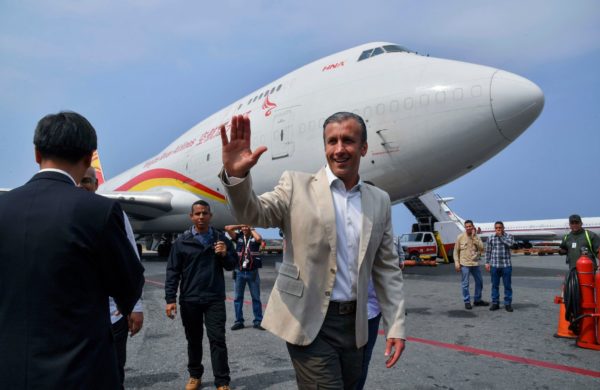 We should begin by recognizing that Casey provides no proof of the authenticity of the alleged documents, and there is no reason why readers should take the assurances of unnamed “former top Venezuelan intelligence official[s]” at face value, especially those currently outside Venezuela collaborating with Washington. Similar sources were used to craft the fraudulent case for war in Iraq.

For instance, former Venezuelan intelligence czar Hugo “El Pollo” Carvajal, who broke with the Maduro government in 2017, is facing extradition to the US from Spain on cocaine-smuggling charges. In February, the ex-general gave an interview to Casey and the Times (2/21/19) in which he accused El Aissami of similar drug trafficking and Hezbollah links. Nowhere in the article did Casey think it relevant to mention that Carvajal plans to cooperate with US authorities, and thus has reasonable motive to fabricate information that improves the conditions of his plea bargain.

Taking refuge in anonymity, which the Times’ own handbook describes as a “last resort,” Casey leaves open the question of whether his source is Carvajal or another ex-official collaborating with the US who authored the dossier after leaving Venezuela, since no date is provided. From “Curveball” to North Korean defectors, corporate media have been consistently guilty of not examining sources’ motives so long as their “information” bolsters US foreign policy interests, even at the cost of tens or hundreds of thousands of lives.

Beyond the issue of sourcing, the alleged “dossier” has a troubling number of logical and factual inconsistencies. A case in point is the alleged testimony from an unnamed National Guard officer about a 2004 raid near the border with Brazil, which reportedly found more than 150 tons of urea in a warehouse. Casey disingenuously refers to urea as a “precursor substance used to make cocaine,” when in fact over 90 percent of industrially produced urea is used for fertilizer. Casey does concede later on that urea has non-cocaine purposes, but cannot conceive of the possibility of the substance being stored in a given location only to be used elsewhere.

The narrative function of the urea bust, which for some reason was not reported until a mysterious dossier was handed to the New York Times 15 years later, is to provide a link to Walid Makled, allegedly the owner of the urea warehouses, and a drug trafficking kingpin of sorts. Even assuming that the urea was meant for cocaine production, and not for more mundane agricultural purposes, a key fact is that Makled is currently serving a jail sentence in Venezuela for drug trafficking. This inconvenient reality, noted but not explained by the Times, on its face seriously undermines the idea that the current Industry minister, supposedly a close associate of Makled, is a powerful figure running a drug ring at the heart of the Venezuelan state.

That aside, it’s worth reviewing the “links” that Casey presents between Makled and El Aissami:

In the absence of any externally verifiable evidence, what Casey presents as bombshell revelations of solid links to drug trafficking come out looking like 15-year-old gossip from unnamed sources. 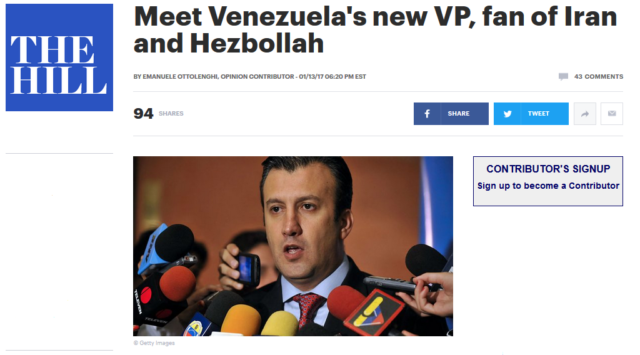 Attempts to tie Venezuela to demonized Middle Easterners are nothing new (The Hill, 1/13/17). 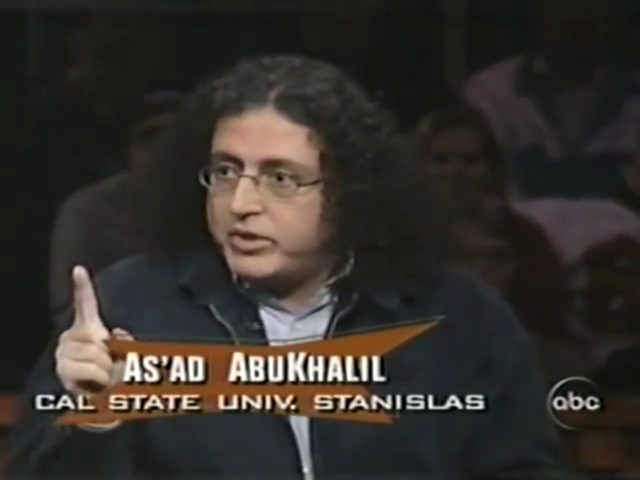 While Casey’s story provides very questionable allegations on links to drug trafficking and to Hezbollah, the connection between both is even more dubious.

The dossier concludes with informant testimony on the family’s ties to Hezbollah…. One of the sources of the information was the drug lord, Mr. Makled, who described Mr. El Aissami’s involvement in the scheme, according to the intelligence memo.

After establishing highly questionable ties between Tareck El Aissami and Walid Makled, largely based on their shared Syrian ancestry, Casey’s “dossier” then claims it is none other than Makled who “reveals” El Aissami’s supposed Hezbollah plot.

According to the alleged “documents,” El Aissami and his father were “involved in a plan to train Hezbollah members in Venezuela, ‘with the aim of expanding intelligence networks throughout Latin America and at the same time working in drug trafficking.’”

The unspoken assumption is that Hezbollah, which is a resistance movement and political party that forms part of the the elected Lebanese government, would be interested in conducting such illicit activities halfway around the world. Here Casey displays a geopolitical illiteracy on par with top Trump administration officials since, according to Middle East expert As’ad AbuKhalil, “there is no agenda or reason for Hezbollah to have an international presence.”

“For what purpose? Doesn’t the party have enough on its plate in Lebanon itself?” he asked, while acknowledging that the party does have sympathizers and supporters worldwide.

On the assertion that Hezbollah is engaged in drug trafficking, the University of California at Stanislaus professor is equally skeptical. “There has been no credible story in Arabic or in Western languages about Hezbollah’s involvement in drugs,” he stressed:

Hezbollah publicly and organizationally took a stance against drugs and issues fatwas against drugs not only among members but even in Shiite areas of Lebanon.  Hezbollah has even allowed Lebanese government agencies to penetrate deep into its strongholds [this year] to search for drug traffickers.

Casey and his editors cleverly shield themselves from any reputational damage over the ludicrous nature of these allegations with a rather significant proviso buried in the 14th paragraph of the article:

Whether Hezbollah ever set up its intelligence network or drug routes in Venezuela is not addressed in the dossier. But it does assert that Hezbollah militants established themselves in the country with Mr. El Aissami’s help.

In other words, what was originally presented as anonymously sourced claims about Hezbollah spying and drug trafficking in Venezuela turn out to be little more than speculation about intent to carry out such activities.

In giving credence to these allegations, the Times repeats the propaganda of top Trump administration officials and the Israeli government about the “global terrorist ambitions” of Iran/Hezbollah, which is in league with Venezuela’s socialist “narco-dictatorship.”

Having played a key propaganda role in recent US regime change operations in Iraq, Syria, Libya and elsewhere, corporate media outlets like the New York Times are all too eager to beat the drums of war once again. With Washington actively threatening military force in both Iran and Venezuela, Nicholas Casey lends a hand in manufacturing public consent for not one but two illegal wars.