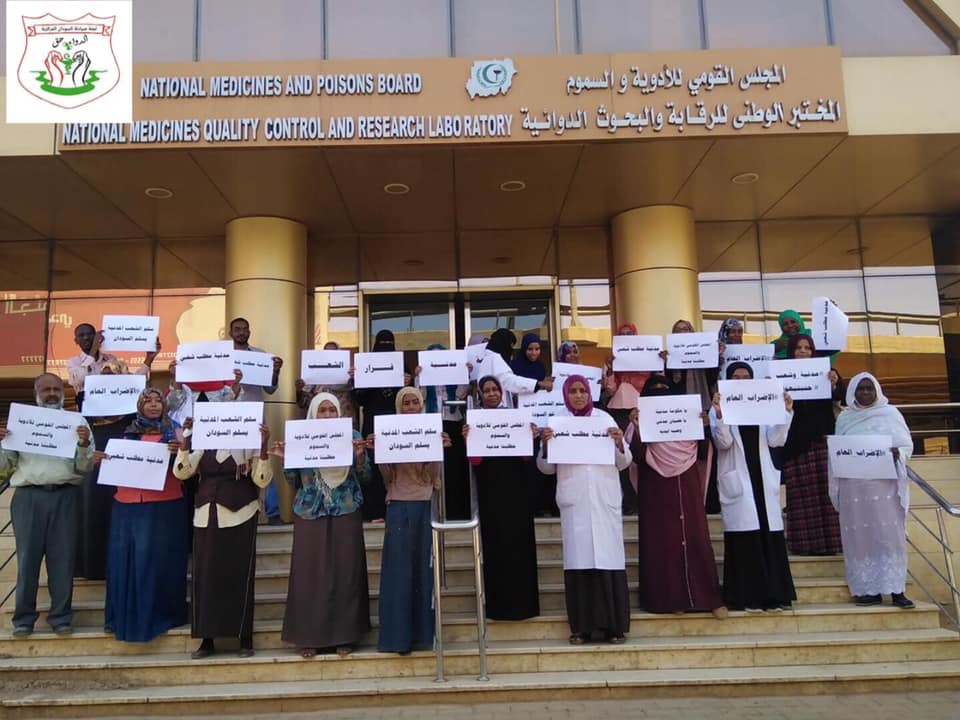 Pharmacists start signing the revolutionary attendance notebook. Pharmacists and employees of the National Medicines and Poisons Board and National Medicines Quality Control and Research Laboratory lining up in a protest vigil. They declare their readiness for political strike. Photo: Facebook

Employees of various public and private companies across different sectors have signed the ‘revolutionary attendance notebook’ circulated by the Sudanese Professionals Association (SPA), vowing to participate in political strike and civil disobedience against the military rule.

The SPA called for an escalation on May 21, after the breakdown of negotiations between the military junta and the representatives of the protesters. The military junta assumed governing authority as the Transitional Military Council (TMC) after Omar al-Bashir was removed from presidency last month under the pressure of mass demonstrations. Since then, the protesters have been demanding a transition to civilian rule.

The Declaration of Freedom and Change Forces (DFCF) – a broad coalition of political parties, unions and associations – refused to cede sovereign power to the army. Represented in this coalition are the hundreds of thousands of protesters who have remained outside the army headquarters in Khartoum to back their demand for a civilian rule.

At the negotiations last week, the composition of the legislative council and the cabinet was decided on and the military conceded for a civilian domination of both. However, no agreement was reached on the composition of the sovereignty council when talks were suspended by the TMC for 72 hours, within which, the junta insisted, the protesters had to remove the barricades they had erected.

The barricades erected to guard the sit-in demonstration have remained in place and been further reinforced, however the protesters made a concession to further the negotiations by removing the barricades which were curtailing the mobility of the security forces’ vehicles.

Though, their concession yielded no result. On Sunday when talks were resumed, the junta maintained the same position on the sovereign council.

A day before the breakdown of talks was announced, the Polit Bureau of the Sudanese Communist Party (SCP) – which is a part of the DFCF – released a statement on Monday, reiterating the party’s “principled position that the civilian forces should have the majority in the Sovereign Council and also its presidency. We will not accept any retreat from this position which enjoys support from the masses of our people that have made enormous sacrifices during the past 30 years [under al-Bashir’s rule which they overthrew].. as well as during their [sit-in demonstrations] in the capital and the regions.”

“We are confident”, the statement added, “that the masses of our people will continue their struggle for civilian rule.. by escalating sit-ins in the capital and regions, escalating mass action with marches, demonstrations, strikes and protest vigils.. [restoring] trade unions, associations and local government committees in cities, villages and neighborhoods, as well as [by undertaking] general political strike and civil disobedience..”

On the evening this statement was released, TMC’s vice president, General Mohamed Hamdan Daglo, said while addressing a brigade of the Rapid Support Forces (RSF) which he heads, “There are parties that are plotting and planning to create chaos.. [W]e are monitoring them closely.. We are ready.. and we will not compromise with the security and stability of the country.” The RSF is a notorious paramilitary force which has among its ranks the fighters who were used by Bashir’s regime to commit a genocide in Darfur.

The report in Sudan Tribune which carried the above quote from Daglo’s address states that this “warning comes after statements by Mohamed Ali al-Gizouli, a leader of the radical Movement of the Support of Sharia.. during a march they organized to defend the Islamic legislation in Sudan on Saturday.”

Their march was held as a protest against the DFCF’s refusal to assure the Islamists that the transitional government they are trying to set up will govern in accordance with the Sharia law. However, doing so would be contrary to the tasks set out in the Declaration, which was signed by the different political forces that have come together under this umbrella organization.

Moreover, most of the protesters they represent want to root out the Islamists, under whose rule the Sharia law was introduced and selectively used to target political opponents.

Speaking at this march, Gizouli threatened to wage a war against the transitional government should power be handed over to the DFCF. However, it is extremely unlikely that general Daqlo’s threat to unnamed “parties” was a reference to this incident. It was after all, the president of the TMC who had first raised the concern that Sharia law was not being mentioned in the DFCF’s proposals.

The party which had previously tried to mobilize for such a march was the Popular Congress Party, which was founded in 1999 by Hassan al-Turabi, the mentor under whose tutelage Bashir introduced Sharia laws after coming to power through a coup in 1989. However, the attempts of this party had failed.

The mobilization on Saturday was led by well-known Wahabi extremists, many of whom are funded and backed by the National Intelligence and Security Services, a source part of the opposition alliance told People’s Dispatch.

The morning after this threat was issued by Daglo, the TMC officially announced that the negotiations had broken down. In response to the military junta’s intransigence, the SPA – an association of various organizations representing doctors, pharmacists, lawyers, teachers, engineers etc which has been spearheading the mass-demonstrations since December – has called for an escalation.

Cautioning that settling for “partial gains” will prove to be a “setback for the revolution and a step backwards in the path of comprehensive change”, the SPA has declared, “we open the revolutionary attendance book for the public political strike”, calling on employees of all sectors who have not yet associated themselves with the SPA to sign up for the escalation.

The statement further added that the background preparations “to determine the zero hour” and for “the declaration of civil disobedience and the general political strike” have been completed.

Responding to this call, the employees of the Nile trade and development bank, Agricultural bank of Sennar and Blue Nile, the telecom giants Zain and MTN, and a number of other public and private companies operating in primary, secondary and tertiary sectors of the country have held demonstrations, holding up as placards their signatures in the ‘Revolutionary Attendance Notebook’, vowing to take part in the strike.

The highly anticipated third round of talks between the Sudanese Professionals Association and the Transitional Military Council (TMC) was wound up last night without reaching agreement on the outstanding issues.

In a statement issued after the meeting, SPA blamed the failure on TMC’s insistence on “putting the cart before the horse”, in reference to the Council’s uncompromising demand that it holds the majority of seats, and the chairmanship, of the Sovereign Council. SPA dismissed that stance as against the intent and purposes of the Declaration of Freedom and Change (DFC), which envisages a civil authority structure at all levels of governance, including the sovereign council. SPA announced the start of the build up towards civil disobedience and a general strike. Since the call for the general strike was issued, many professional bodies and associations declared their readiness to answer the call.

Below are highlights of the statement.

Yesterday a new round of talks between the DFC Forces and the TMC was held and we can say in all transparency that the Military Council is still placing the sovereign council cart before the revolution’s horse and is determined to undermine the DFC objectives.

We, at SPA, believe that the cart must be pushed aside to let the revolution’s horse run its course to the finish line. TMC’s insistence on having a sovereign council with a military majority and headed by a military figure falls short of meeting the Revolution’s objectives.

The DFC has clearly identified “civil authority” as an indispensable tool for change. Such civil authority cannot be attained by merely replacing an old military power with a new one. The DFC forces’s intention is to have a system of government where all the structures of governance are purely civilian and a majority representation of civilians at all levels, including the sovereign. Our armed forces shall undertake the noble and patriotic duty of safeguarding this system.

Despite the heinous act of the murderous defunct regime, our people have never lost hope in passing to a new era of freedom, peace, and justice. To attain that goal, we are now heading towards civil disobedience and a general political strike pursuant to preset timetables. For this purpose, we are calling upon all revolutionary entities to get in touch with the strike committees in the various professional, artisan, and service sectors to sign up.

We will stay true to our commitment of achieving the full aspirations of our people and will never resign ourselves to accept any partial gains. We will never compromise on the objective of building a civilian system of government, and we will count on our armed forces to defend our soil and to guard our democracy against all atrocities.

Setting up the strike committee is a top priority

Our rallies scheduled for today represent the start of the buildup.

Attendance at the sit-in zone is vital to achieving the Revolution’s goals.