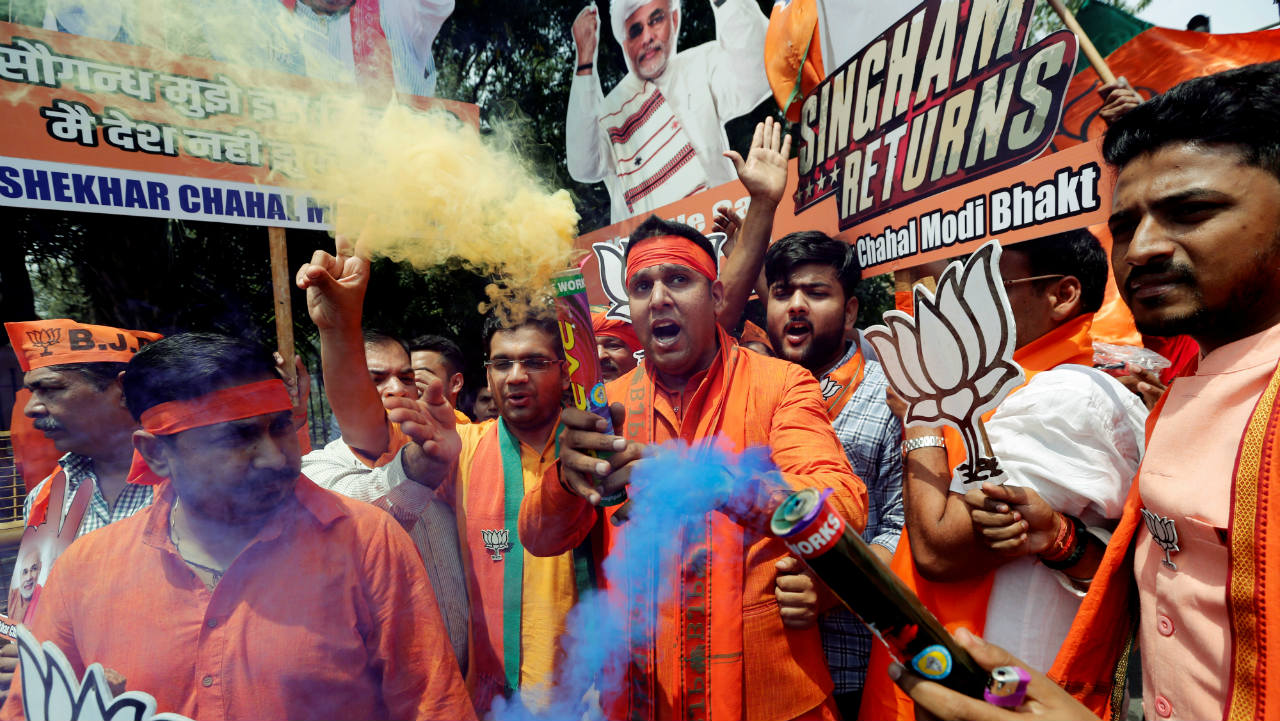 The National Democratic Alliance (NDA) led by Hindu far-right party, Bharatiya Janata Party (BJP) has managed to secure a majority of 350 seats (numbers subjected to minor changes as final result is awaited) out of 542 for a second term in the recent Indian general elections. The BJP alone received around 304 votes compared to 282 in the 2014 elections.

The United Progressive Alliance (UPA) led by centrist-Indian National Congress (INC) saw a marginal rise of around 28 seats from 2014 general elections. In the 2014 elections, UPA got 60 seats, while the NDA secured 336 out of 535 seats in the Lok Sabha (lower house of Indian parliament).

The regional parties including Bahujan Samaj Party (BSP) and Samajwadi Party (SP) overall witnessed a decline in their support base and received 104 seats, 21 less than the 2014 general elections.

More than 600 million eligible voters registered their ballot in a mammoth seven week long voting process in seven stages, which began on April 11 and ended on May 19, 2019. More than 8,000 candidates were contesting in the election. Polling in the Indian elections are done via Electronic Voting Machines (EVMs) rather than paper ballots.

One of worrying aspects of the election results is the victory of BJP candidate from Bhopal, Pragya Thakur. Thakur was accused of participation in the 2008 Malegaon bombings targeting the Muslim community. She has also been accused of giving provocative statements against members of the minority communities and also praising Nathuram Godse, the Hindu fundamentalist who assassinated Mahatma Gandhi in 1948.

Many fear that the landslide victory of the BJP, will further increase religious polarization and attacks on minorities and dissenting voices in the country, aspects that had marked its rule in last five years. BJP’s rule during 2014-19 also witnessed numerous anti-working class and neoliberal economic policies, which led to rising unemployment and a crumbling economy.

The 2019 election campaigning by BJP and Prime Minister Narendra Modi was marred by religiously polarized messaging, especially targeting the country’s minority populations. Modi is considered to be a controversial figure for his role as Chief Minister of Gujarat during the 2002 anti-Muslim pogrom in the state, in which more than 2,000 people were killed.

The BJP’s five year tenure witnessed attacks on country’s democratic and academic institutions. The year 2016 witnessed a state sponsored crackdown on Jawaharlal Nehru University (JNU), known for its progressive campus environment, in which many students including CPI’s candidate and then student union president Kanhaiya Kumar were arrested on sedition charges.

The 2019 elections also witnessed, for the first time, questions on the credibility of Election Commision of India (ECI), the constitutional body mandated to organize free and fair elections. There were several reports regarding the ECI’s bias towards BJP candidates. One of three elections commissioners, Ashok Lavasa expressed his dissent in the clean chits [certificate of exoneration] given to prime minister Narendra Modi on issue of violation of Model code of conduct, rules about do’s and dont’s during the elections. Also numerous issues about the lack of secure transferring of EVMs post the polling to strong room (secured storage) have been raised by activists.

The results and massive victory for the NDA had been a shocker for many in the progressive forces, who had hoped that massive farmers and youth mobilizations in past five years would had have adverse impact on BJP’s performance.

In a statement about the election results and victory of right wing forces, Communist Party of India (Marxist) said that there are very big challenges ahead regarding the defense of our secular democratic Republic, the institutions of Constitutional authority, people’s rights and livelihood issues.

CPI noted that the Modi-BJP government attempted all kinds manipulations and manoeuvres to polarise the voters in the name of religion and armed forces and divert people’s attention from core issues, including unemployment and 2016 ban on banknotes (demonetization).

Dipankar Bhattacharya, General Secretary of CPI (ML) Liberation said that the Modi regime was widely recognised as a dispensation of undeclared Emergency and the 2019 elections will go down in history as India’s first Lok Sabha elections held in the shadow of tyranny.

“We rededicate ourselves to the task of building anti-fascist unity and solidarity and pledge to stand with all India’s minorities and marginalised communities and citizens facing persecution,” added Dipankar Bhattacharya.

(*final results have not been released, minor changes in number of seats is expected)