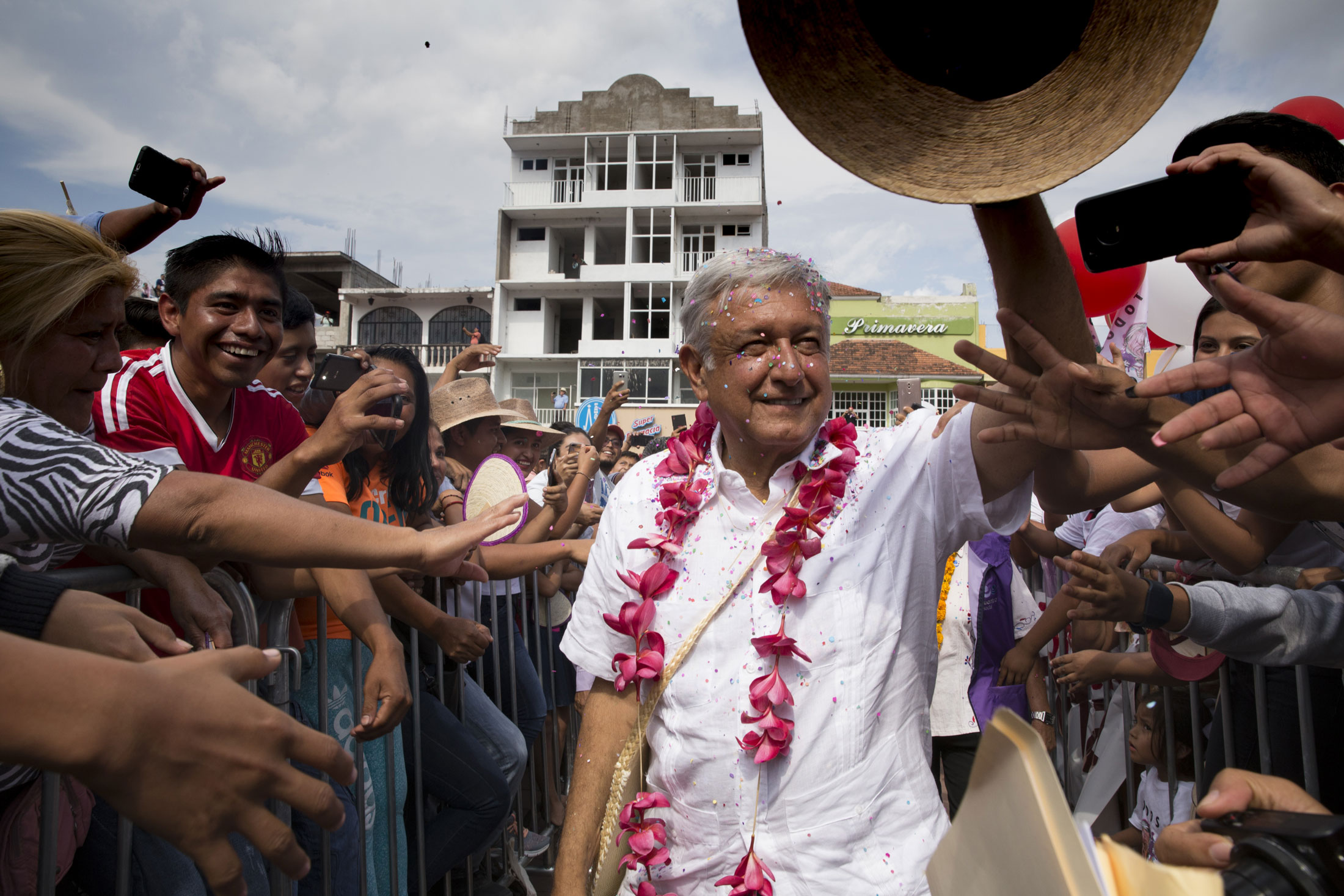 What is AMLO’s message in this campaign?

How is the Fourth Transformation of Mexico going?

Was it only a campaign slogan or is it being translated into concrete policies?

As he nears his sixth month in office, Mexican President Andrés Manuel López Obrador travels around the nation holding public events to report on his social policies and asking citizens for help in removing the vices of the old regime from the State.

AMLO exhibits a unique leadership in this enormous country, which he knows from end to end, and where he managed to organize a great national coalition around himself. He is one of the few Western presidents with the ability to speak and reply for hours, without assistants or telepromters, on countless aspects of the country’s public life. He is the author of 17 books, has a political career of over three decades and is a personality unparalleled in Mexico today.

After running for the presidency three times and finally defeating the electoral fraud apparatus of the PRI – PAN, Andrés Manuel (as he has been affectionately called by those who have followed him for years) proposes to achieve the fourth historical transformation of Mexico, an ambitious goal that has led to his being labelled “arrogant” and “messianic”.

In order to defeat the media shield of a hostile journalistic system, AMLO established in the first step his long morning press conferences, where he also presents specialists, secretaries and ministers who report on the activity of each area. Thus, he achieved a direct line of communication, without intermediaries, with millions of people.

This strategy was deepened with their tours around the country, through massive face-to-face meetings with citizens.

In these public spaces, the Mexican president speaks colloquially and intimately, accompanied by members of his cabinet, about how the transformation process is progressing. He provides figures and data on the social welfare programs launched. He justifies how these expenses are financed with the money previously used for corruption. And he preaches moral principles with historical themes as a backdrop to these policies.

He also tells anecdotes of the waste and greed of the previous regime.

These are massive acts, in which the municipal and state authorities participate, in which the commitments that the federal government undertakes in terms of works, programs and funding are announced. The whistles and screams of the public in certain sectors against certain individuals add a condiment of colour and spontaneity. The political ironies and puns of the main speaker complete the show.

Andrés Manuel’s public squares are, like his morning press conference and many other elements of his government, a communication policy of great originality. But: What is AMLO’s central message in this permanent campaign? What is he saying in the first six months of his government?

This is a summary of the main concepts he conveys in his public acts:

Pacifying the country is priority one:  For its statistics of violence, especially after the launch of Felipe Calderón’s war on drugs, Mexico suffers from a real internal war. AMLO proposes to stop it along three axes: 1) Attention to young people with scholarships, promotion of full employment and opportunities to study, in order to move them away from the sicariato. 2) The legalization of drugs to weaken the power of criminal cartels, as well as the decriminalization of drug users. 3) Greater availability of personnel for internal security. To this end, a constitutional reform allowed the creation of the National Guard, by which the Army and Navy participate in internal security operations. This gesture earned him harsh criticism from the Zapatistas, who accuse AMLO of having deployed more troops than any previous government.

Fighting corruption and promoting social programs, hand in hand: The Mexican president presumes to have severed corruption ” from the head”. With the savings generated by eliminating corrupt practices and applying austerity policies, funds are made available for social programs. “Corruption money now feeds social programs,” he says. The government has launched a mix of scholarship programs for students and pensions for the elderly, the disabled, some of universal scope and others sectoral.

According to the Welfare Census, the benefits reach 14 million people. The government’s strategy is for them to arrive without intermediaries or cash distribution. The problem: only 65% of municipal capitals have banks and around 40% of Mexicans have bank accounts.

Vices of the old state, an obstacle to overcome: The government is confronted with the practical problem that the old PRI state was not oriented to serve the people, but to serve a particular group, says AMLO. “The Mexican state is a rheumatic and crafty elephant. You have to push it all the time. We are going to push the elephant, we are going to count on its support!”

As part of the fight against corruption, the government claims that huachicoleo (organized theft of gasoline from the state oil company Pemex) was reduced by 95%. These funds have also been used to finance social welfare programs, such as interest-free loans for small and medium-sized entrepreneurs and merchants.

Austerity, by example: The PRI presidential staff had thousands of assets for its security. With AMLO, these were transferred to internal security and now they are dedicated to taking care of the people. A law was passed that capped the salaries of the public administration. No one can earn more than the president, whose salary is about 108,000 pesos a month. The million-dollar pensions for former presidents were eliminated. Peña Nieto’s expensive presidential plane in California was put up for sale. “Let’s see if Trump will cheer him up,” AMLO ironically says. “Because even Trump doesn’t have a plane like that”. Within this policy of austerity, the president announced that with his entourage he travels by land, sometimes in four-hour trips, because he deactivated the air fleet whose use was wasted at the hands of the ruling elite: “They went by helicopter to play golf”.

Moralizing public life with traditional values: There is a strong component of traditional values and principles in the messages of President Andrés Manuel López Obrador. They are open and broadly inclusive messages, most of them about traditional values, which would suggest an attempt to balance a wide range of currents of opinion. There is an insistent moral message against the greed that underpinned the open pillage of the nation’s public coffers and wealth: “Those sick of corruption must be cured. To defeat corruption, it must be stigmatized. Before it was a merit, an act of audacity, a prototype… Now we have to change that”.

There are much bolder and more innovative pronouncements, such as support for the launching of the debate for the legalization of drugs, or the explicit rejection of agro-toxins and transgenics.

There is a repeated call for national unity and reconciliation: “Avoid the grid (daily conspiracies and plots for or against certain groups, to favor sectoral interests) and put the homeland first,” is the president’s advice.

How is the Fourth Transformation of Mexico progressing?

On June 1, 2019, AMLO will complete six months in office. In his public agenda there is much more: the megaproject of the Mayan Train, the reversal of the Energy and Education reforms sanctioned by the previous government, the proposal to combat illegal immigration through development plans and economic integration with the neighbouring nations, and also the political battle against the old elites displaced from power who promote a battery of criticisms and negative propaganda from the media. He also has political enemies confronting him, the Zapatistas, who consider him a revamped and deceitful version of the same type of capitalist-imperialist domination.

The Mexican president has the support of a formidable number of intellectuals and first-rate political cadres, with the apparatus of his Morena party (a heterogeneous grouping of his own party leaders and recycled leaders of the former governing party), and above all, of a hopeful citizenry.

AMLO travels around Mexico pushing an elephant. It is a peaceful, gradual, and law-abiding process that seeks to pacify a country ravaged by mafia pacts and internecine wars, modernize an inefficient and corrupt state, and maintain peace with its arrogant northern neighbour. Will he succeed?