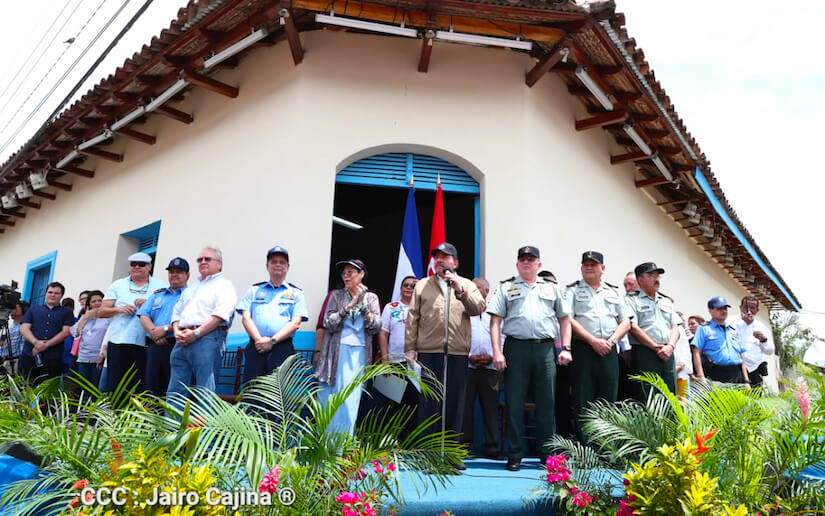 Words of Daniel Ortega During a Ceremony in Commemoration of the 124th Birthday of the General of Free Men and Women, Augusto C. Sandino

Dear Nicaraguan Sisters, Dear People of Niquinohomo, we welcome here, in the cradle of General Sandino, the Mesoamerican Sisters who are currently gathered here in our country and where the Sao Paulo Forum will also be held. For all of them, welcome! To the Ambassadors also of Brotherly Peoples.

Here with the children of Sandino, all of you, boys, girls, Youth, children of Sandino, and the Family of our General, Blanca, who is at home and who is sure to see us on television, for her all our Love, all our Affection, the same for the grandchildren of the General who accompany us here, grandchildren, great-grandchildren, here is Sandino’s Blood running through the vein of his Family and running through the veins of the entire Nicaragua, of the Peasants, of the Workers, of the Women, of the Youth, there running.

They are with us, we are accompanied by the Local Authorities of the Sandinista Front; Mayors; Compañera Guiomar who attends to all the Mayors; Compañero Gustavo Porras, President of the National Assembly.

Now Bluefields can be reached by road, the road to Bluefields has just been inaugurated, the first time in history that the Caribbean and the Pacific have joined! Before, either you went by plane, very expensive for the population, or using land transport from here to El Rama and from El Rama in water transport to Bluefields, double cost. On the other hand, now with the Highway a way is opened that means Development, Well-being for all the inhabitants of the Caribbean Coast of Nicaragua.

And on a day like today, on May 18, 1960, I still remember that tragic moment… 1960, look! At that time I was 15 years old, like some boys and girls I see around here, but we were already fighting, and they applied what was known as the Fugue Law to 3 Nicaraguan patriots who had been detained since 1956. They were tortured and then imprisoned, condemned, and after 4 years of imprisonment there in the Aviation Jails, this cannot be denied by anyone because it was a totally known fact, there they were taken from their cells and shot!

There, the brothers Edwin Castro, father of Edwin the Congressman, Cornelio Silva Argüello and Ausberto Narváez, were murdered. All three were shot in the prisons of La Aviación by the “democratic” government of Somoza. Yes, because that was a “democratic” government that was recognized by the entire international community, which gave him weapons.

The United States gave arms to Somoza’s Army, why, because the United States Government is the one that had invaded Nicaragua several times and after the last invasion, so what did they do? They organized Nicaraguans who, acting as mercenaries against their own country, out of hunger, out of necessity, many people joined the Guard out of necessity, we understand it, people from very poor Peasant Families, but with commanders selected and trained in the United States of America who put Somoza, Anastasio Somoza, at the front.

And well, that was very logically recognized by the U.S. governors and by the governors of all countries, and here there were assassinations continuously like this one, but of course, since it was the club of those handed over to the Empire, then it was the people here who had to endure, as the people had to suffer the murder of Sandino, a cowardly act of betrayal, of deception!

Sandino signing the Peace. Sandino invited to the Presidency by President Sacasa for dinner. Sandino before photographed with Somoza, because Somoza told Sandino that he respected him, that they were brothers, he told him, and they took the famous photo. And then Somoza by order of the Yankees sending Sandino to be assassinated after dinner with President Sacasa.

Sacasa’s daughter, who was at dinner, also comes down and when she sees that Sandino has been detained, she arrives and talks, what happens? And she looks for how to talk to her father, but the Guards who are fulfilling the Yankees’ order with Somoza, grab Sandino with the Companions and shoot them! Crimes that were not condemned by the “democrats,” by those who call themselves “democrats,” by those who feel they own Democracy and who in the name of Democracy have invaded our countries and continue threatening and attacking the Peoples.

Well, they, not a word, rather celebrating Sandino’s assassination, thinking that the Moral, the Dignity of the Nicaraguan People, was already destroyed there. That’s what they believed, that by murdering Sandino the People would be on their knees before them. But the people there continued fighting, and General Raudales appeared giving the battle, who had been with Sandino and fell in combat, and then Colonel Santos López who had managed to survive the day of Sandino’s murder because he was somewhere else and there he was wounded because they attacked the house, and he managed to escape.

And there with Santos López, who was carrying Sandino’s Red and Black Flag in his hands while the Blue and White Flag of the Homeland was humiliated, dragged, humiliated, sold, so Colonel Santos López meets Carlos, Tomás and Silvio Mayorga, and they meet Blanca, General Sandino’s daughter as well, When they thought that the Honor of this People had already been lost, when they thought that the People was on its knees, because they murdered Brothers like Edwin Castro, Cornelio Silva and Ausberto Narváez, but the Honor of this People had not been lost.

And on a day like today, in the Comarca of Zaragoza, Comrade Eliseo Antonio Duarte Talavera falls; this was in 1979. And in 1980, when the Great National Literacy Crusade began, against whom did the terrorists, the traitors, the ones who dragged the Blue-White Flag of the Homeland, launch themselves?

Look well, since 1927, when the traitors delivered, sold the Blue and White Flag and gave the guns to the Yankee Troops, and Moncada signed the Pact, the traitor Moncada signed the Pact with the Yankees, Colonel Stimson of the U.S. Troops declared on May 19, 1927 that the struggle had already ended in Nicaragua and that during the last week had surrendered and those who had delivered to the Fatherland.

There was Sandino, yes, from there Sandino went out to give the battle, until the moment in which it culminates with his assassination. And after the murder, their belief was that in Nicaragua there were no more dignified men or women, that Nicaragua was already on its knees, and the Sandinista Front appeared with Sandino’s Red and Black Flag, to rescue the Blue and White Flag that was dragged along.

A day like today, also May 18, 1781, was assassinated in the Plaza de Armas, there in Peru, a Brother who defended our Roots, and that time and the Peoples do not forget; and this is well known by the Sisters of the Sao Paulo Forum. Túpac Amaru was executed that day, he was torn to pieces, he was executed, and they thought that this was forever buried in oblivion, and it was not so.

In other words, Túpac Amaru is in the Battles that our Peoples are fighting, as is Sandino, as is Fidel, as is Chávez, all of us in this Great Battle for Freedom, for Justice, for Sovereignty and for the Unity of our Peoples. And here is Sandino giving that Battle, giving this Struggle, and demonstrating to this People that the Blood of Sandino is still alive, giving the Battle for Peace, and triumphing for Peace!