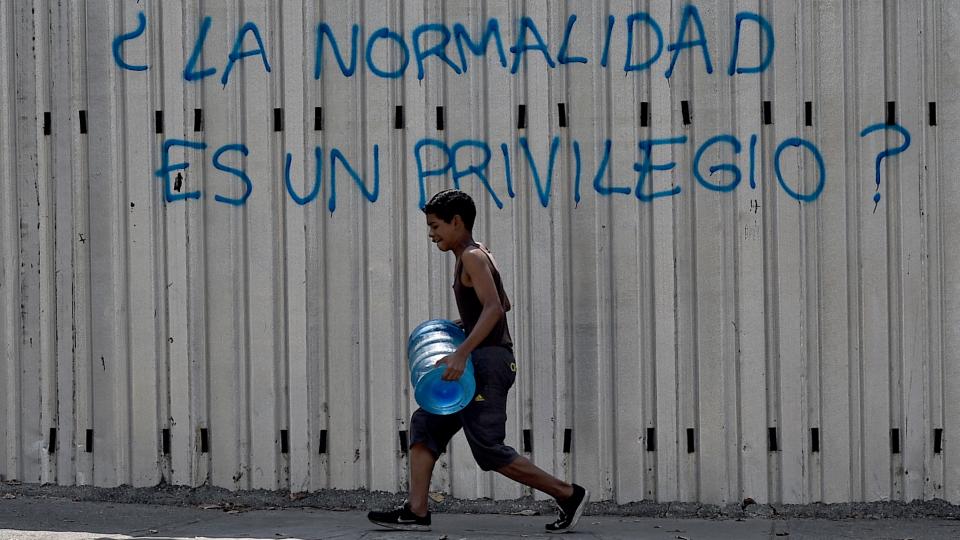 The assault was supposed to be short, Maduro’s government was not in a position to resist. With this conviction the United States unleashed a strategy to overthrow Maduro: they created Juan Guaidó President 2.0, equipped him with a fictional government, international recognition, a collective narrative in the media, and accelerated economic sanctions at different levels. From the overlapping variables there should have been different results, leading to forced negotiation or exit.

Events did not take the planned course. First and most important, the breaking of the Bolivarian National Armed Force (FANB): a crucial element that should have happened but did not succeed. A series of tactics were implemented for it, from internal conspiracy with the support of a lot of dollars, visas and guarantees of the strategy of a latent threat of a possible U.S. intervention. A combination of bluff -an unloaded weapon aimed at your face- with built up dates to try to achieve a break, as it was on February 23rd.

The second event that should have occurred, with a lesser capacity to define the target, was that Guaido was supposed to build mass support in the streets. He boasted that 90 per cent of the population supports him. Pictures of his mass mobilization capacity show that the first momentum on January 23, when his self-proclamation was acknowledged by Donald Trump through a tweet, lost strength. A major reason for this was the crisis of expectations that resulted from the unfulfilled promise of an immediate outcome. Another is that it was an artificial, communicational, diplomatic building which could not gather more than the Right’s historical rank-and-file supporters, characterized by a specific social, geographic class, living conditions, idiosyncrasy and symbolism. The opponents looked too much like themselves.

Third was the attempt to take the poor to the streets; blackouts and the water shortages were the most favorable of the scenarios to provoke this. But the outcome was not what they expected either. The clearer and extended reality was the majority trying to solve their problems, individually, collectively, together with the Venezuelan Government. Continued protests, fostered almost completely by the Right, were scarce and without capacity to spread in the country.

Each of these variables have feedback points. The crisis of expectations is the result, for instance, of the fact that the Armed Force has not broken, that Guaido speaks of a speediness that does not occur, and of the conclusion that if they don’t succeed in any of their three outcomes, then the last resort is an international intervention headed by the United States. That same interventionist narrative moves away from those who see Guaido as an alternative to the current political and economic situation. Calling on the majorities to achieve an international operation comes across evident barriers.

Overthrowing Maduro does not seem possible in the correlation of national forces. It has been proved that the attack will not be short and that Chavismo, which is more than a Government, has strength enough to resist. If it was just a national affair, Guaido would lose strength to the point that he wouldn’t even be part of the list of opposition leaders that carry the burden of defeat. The problem is that this new coup attempt was devised over a point of no return with the United States building of a parallel government facade, acknowledged by the European Union, the United Kingdom, Israel, Canada, and right-wing governments in Latin America. What to do with Guaido when the plan is not successful due to initial miscalculations?

The question is due to the U.S., its current Administration is a mixture of Donald Trump-neoconservative leaders, and the so-called deep State; that is to say, real, invisible structures of power that constitute and guarantee that country’s strategic development in the geopolitical dispute. A defeat in Venezuela would be charged to the Administration in a pre-election period and it would suffer a double blow with Maduro’s permanence, or the lack of capacity to put into line a key country in the Latin American continent, and its implication in the international context of things.

The Deep State has grown stronger recently through tweets and speeches of U.S. spokespeople like Special Representative for Venezuela Elliott Abrams, Secretary of State Mike Pompeo, National Security Advisor John Bolton, and Southern Command’s commander Craig Faller. Their different statements have shifted placing Venezuela as an operational base for Russia, Iran, Cuba and China, while the Maduro Administration would be subordinated to each of these governments and their corresponding intelligence and military services —particularly to the first three..

The United States has announced its following steps based on that narrative. Pompeo is going to Chile, Paraguay, Peru and Colombia; Abrams to Spain and Portugal; and they convened a third meeting in the United Nations Security Council to talk about Venezuela’s situation. They have not announced the goals of the different movements yet. It is possible though to predict that there is a private and public dimension in the agreements. A goal would be to move towards a possible objective for the U.S.by declaring the Venezuelan Government a transnational criminal organization and branding colectivos (Chavista grass-roots organizations) as terrorist groups that “undermine the Constitution and territorial integrity of Venezuela according to Bolton’s description. New possible actions result from each of these elements.

That increase in pressure, tightening the blockade, and isolation does not lead yet to the possibility of a military intervention, despite the repeated “all options are on the table.” Abrams himself stepped aside from that hypothesis last Thursday. Therefore, how are they planning to achieve the outcome proposed with the combination of these actions? The United States needs to establish means, on-the-ground operational capacity, and domestic and diplomatic agreements. In this regard, the European Union stance was expressed by its high representative for foreign affairs Federica Mogherini, who affirmed that “new free and credible presidential elections should be held as soon as possible.”

Would the U.S. be willing to accept a negotiated outcome in which Maduro remains in power? So far, that does not look possible. They don’t seem willing to accept a geopolitical defeat in Venezuela either. The U.N. Security Council met on Wednesday to deal with this aspect. At the same time, the Right called for more mobilizations. The scenario continues moving.